Few drivers will ever feel the power of a 1,000bhp+ Formula 1 engine behind them, let alone the exhilaration of piloting one of the cars on a legendary circuit, such as Spa Francorchamps.

What are your senses screaming on the downhill chute to Pouhon as you race towards the left-hand swoop and arc round at a relentless pace, honing in on the second apex as your head is wrestled to the right?

The answer may be below. Titled Pouhon, the artwork has been painted by a man who knows.

Stefan Johansson drove for Ferrari, McLaren, Sauber-Mercedes and Porsche in a career spanning four decades, which took in F1, sports cars and IndyCar. Now he’s using paint and canvas to convey the sensation of top-level racing at some of motor sport’s iconic circuits.

Flying towards Pouhon at Spa, flicking the car into the Lesmo corners at Monza, or darting down the Mulsanne Straight at Le Mans were the unforgettable experiences that formed the basis of his artistic style.

With several pieces based on famous parts of racing circuits around the world, a visceral and abstract format was the best way to convey what he experienced as a racing driver.

“I kind of developed that idea and I tried to project somehow the feeling of speed and things coming at you at a million miles an hour,” he says. “That’s why I’ve harkened back to certain tracks and corners around the world and built the painting around that.

“It can be a feeling in some case or can be a sort of blurry visualisation of what you experience. Pouhon is a great example of that because you go down the hill and out of the left hander before it and you go down that straight and if you look straight, all you can see is sky basically, then you look down and you go into this sort of needle hole.

“There’s a few advertising banners and the grass and all those things but that’s what I’m trying to project there.” 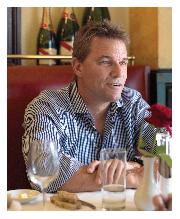 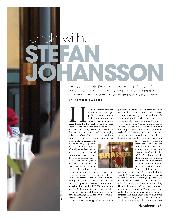 He’s had a lifetime of racing whatever he could get, grabbing any opportunity, rolling with the punches when it went wrong, and never losing his laid-back, good-humoured approach. Having started…

Johansson believes he was already predisposed to the idea of creating art through time spent with his grandfather as a child and it only grew from there.

“I’ve been interested in it all my life,” he says. “My grandfather was an artist so I was a little kid and would paint with him every now and again and had an interest, though I never really practised it even in terms of drawing or anything like that.

It was 34 years ago this month that Johansson began making his own art after losing his great friend, Elio de Angelis in a testing crash at Paul Ricard.

Reeling from the tragedy, he instinctively reached for a canvas and paint.

“What kind of triggered my own practising of it was when Elio De Angelis got killed,” he says. “We were close friends and would hang out together all the time and when he died, it was just – I don’t know to this day what it was that prompted me to do it – but I went and got some canvas and paint and brushes and it was kind of a more therapeutic thing to be honest.

“I wanted to get it out of my head because it was affecting me quite badly. The painting was supposed to be in his memory and that’s really got me started.

“Everybody has their own thing, like you listen to music or you do this or do that but that was always my kind of outlet between races.”

From the early beginnings and using painting as an outlet, Johansson quickly developed his art style to take the form of an abstract “experience”.

Though he began to create his art in response to tragedy, he continued to experiment with painting as an escape from the hectic life of a racing driver, and soon began to bring ideas to life.

His style grew from ideas he had while racing around each of the locations depicted in his paintings.

It’s a style that he has refined through a lot of time that has now been refined down to a precise work flow, allowing several paintings to be worked on at once.

“They take about at least two weeks each. Because they need to dry between when you work on them and then let them sit for a while before going back and working on them, but I work on like three or five at the same time.

“They have to sit again and then you think it’s OK or you think ‘Oh that looks like crap’, so you keep adding and eventually they just feel right and with the abstracts, it’s really a matter of feeling when they’re right.”

There have been a number of paintings already completed but with so many great locations at circuits around the world, Johansson says he is nowhere near finished.

In a career that included racing stints in Europe and the United States, there is hardly a shortage of inspiration for him to draw from.

“I have lots of ideas to do. I’m doing the portraits now ‘Friends, Heroes and Wankers’, and I’ve done about twenty-five of those now, so I think its time to move on now.

“There’s no shortage of ideas, it’s a matter of executing. Now it’s been great because I’ve been super productive with the quarantine so I’m not really doing anything else.”

Several of the paintings currently available are some of Johansson’s favourites, though with plenty more in the pipeline, he is sure another gem is laying in wait and commitment to the canvas.

“I like them all because they mean something to me. I like all of them obviously because I don’t finish them if I don’t like them. I like Tosa, I like Dequetteville Terrace, I like Dingle Dell and there’s a few new ones that I haven’t photographed yet. There’s a couple of really good ones in there too, I think.”

His paintings have proved popular with drivers too, though he refused to be drawn on exactly who.

“I’ve not shown that many, but I think they can all relate to it one way or another. I’ve had a few of them buy a few of my pieces too, a couple of F1 guys. Almost current!”