Aston Martin has confirmed that it has withdrawn its appeal against Sebastian Vettel‘s disqualification from the 2021 Hungarian Grand Prix.

Vettel lost his P2 finish due to there being less than one litre of fuel in the car available for post-race scrutineering.

The team had lodged a Right to Review case but that was dismissed by the FIA due to an insufficient amount of evidence warranting the reinvestigation into the case.

Now, the team has admitted defeat in the overturning of the disqualification but maintains the evidence it presented to the FIA should have led to the incident being revisited.

“Having considered our position and having noted the FIA stewards’ verdict that there was clear new evidence of a fuel system failure, we have nonetheless withdrawn our appeal on the basis that we believe doing so outweighs the benefits of it being heard,” the team statement read. 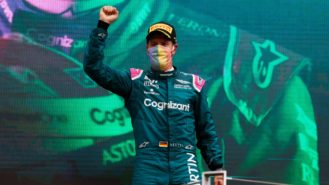 Following the Hungarian Grand Prix, stewards could only extract 0.3L from the car, below the 1L requirement for post-race inspection.

Earlier in the week, the FIA confirmed that the team’s pursuit of a Right to Review had been dismissed due to the level of evidence brought forward by Aston Martin.

The team presented data that indicated a fault had led to the fuel levels being insufficient after the race which was dismissed. Even with a technical fault, the team was found to have had less than the 1L of fuel in the car, necessitating a disqualification.

“We felt that the evidence we presented was relevant and demonstrated to the FIA that he should have been reinstated following his disqualification,” team boss Otmar Szafnauer said of the Right to Review rejection.

It means that Lewis Hamilton’s second-place and Carlos Sainz’s third place finishes are confirmed with the results becoming official almost two weeks after the chequered flag fell in Budapest.