Interesting what you learn from the side of the track, sometimes. Much of it concerns drivers’ commitment and consistency of line, but there are alternative information streams. 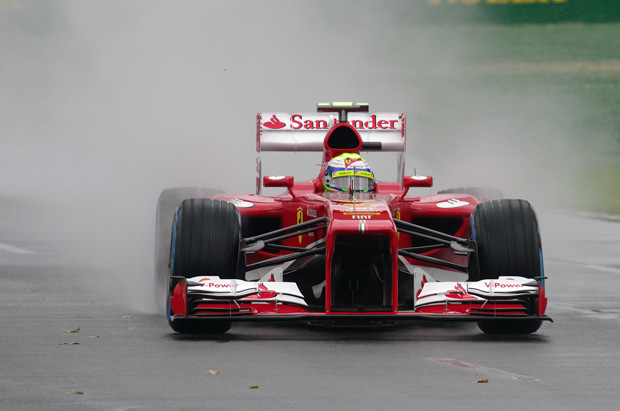 Melbourne’s final free practice session was about 15 minutes old when a carbon-coloured cloud drifted in and coated the circuit with its contents. Drivers tiptoed back to the pits and those of us close to Turn 15 dashed to shelter in a tent kindly offered by marshals. There was a cosmopolitan assembly within, including a local man who had been helping to prepare facilities before and during the event. For the previous few weeks, he had been pounding the track every day in a water tanker, sprinkling the run-off lawns in a bid to keep them spruce. During the immediate build-up, several days of searing heat threatened to tarnish some of this handiwork, so his team had to put in a few 20-hour shifts to restore a little lustre. And then, as the weekend’s first critical moment approached, rain arrived to finish off the job.

He hadn’t just been busy tending the grass, either. He showed us some photos from a recovery incident at 3am on Saturday, when an enterprising local managed to sneak into the circuit to conduct some illicit reconnaissance laps. It’s not clear how he sneaked past security, given that he was driving a sizeable bread delivery lorry, but he did. The adventure concluded when he attempted a 180-degree manoeuvre at Turn 12, presumably to exit the circuit, but drove instead into a gravel trap (whereupon his truck sank to its axles).

Something of a rarity in the context of contemporary F1, this jape was probably the least publicised element of a ramshackle day.

A telemetry glitch meant cars had to run without automated warning systems – the cockpit lights that represent trackside flag signals – and drivers would be trusted, for the balance of the weekend, to enable or disable drag-reduction systems manually, rather than relying on central operation from race control.

And then there was the weather. Melbourne is reputed as a city capable of conjuring four seasons in one day and we had pretty much everything north of snow.

Qualifying was delayed by ever-growing chunks of 10 or 20 minutes, proved destructively chaotic when it did begin and was then put back once again when rain intensified. By that stage, Lewis Hamilton, Felipe Massa, Esteban Gutiérrez and both Caterham drivers had incurred assorted damage – and most of their rivals had been off the circuit at least once.

By the time the information screens bore a message about Q2 starting at 18.50 – almost an hour after the session was supposed to finish – it was clear that the session would conclude in either gathering darkness or, as is now scheduled to happen, on Sunday morning. The first historic sports car race became a casualty, too.

There is always a risk in running events close to twilight for the supposed benefit of European TV audience (remember the 2009 Malaysian GP, which lasted 30-odd laps?), but it’s probably best to give them something to watch, no matter what time of the morning the broadcast takes place.