In the May issue of Motor Sport, we featured two milestones in Ayrton Senna’s career: his first Formula 1 test with Williams at Donington in 1983 and his great victory at the same venue 10 years later. 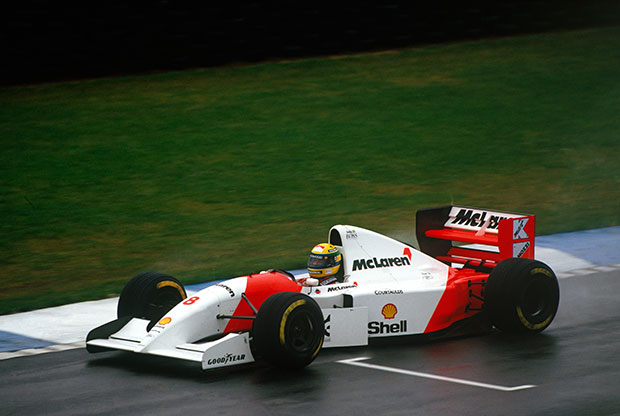 May 1, of course, marks a much sadder anniversary, that of his death at Imola in 1994. But rather than focus on that dark weekend, we’ll be looking at some of his career highlights. To coincide with the Senna content in the magazine, we ran a poll asking what you thought Senna’s greatest drive was. Here’s the countdown of results.

It’s surprising that this race didn’t feature higher in readers’ estimations, as it was at Suzuka that Senna clinched his first World Championship. Starting on pole, he would stall on the grid. By the time he had bump-started his McLaren, he was down in 14th place. In changeable conditions on a slippery track, he came back to win the race and the title.

It took Senna until 1991 to win his home Grand Prix, and he did so in dramatic fashion. Starting from pole (where else?) he carried his lead to the first round of pitstops, when a closing Nigel Mansell lost a lot of time, leaving him fourth. The order settled once the stops were finished and the Williams was coming up fast once again, but he was waylaid by a puncture, leaving Senna to cruise home.

That is until his gearbox started to give up the ghost. Mansell yet again began to demolish the gap as Senna lost fourth, then third and fifth gears, but the hapless Brit’s own ‘box began to deteriorate. The charge was taken up by team-mate Riccardo Patrese, but yet another gearbox failure left him stuck in second place. Unable to shift out of sixth, Senna won the race and had to be lifted out of his car.

Senna’s first Grand Prix victory came in only his second race for Lotus at a sodden Estoril. Starting from pole (also a first) he drove away from the field, lapping every car but the Ferrari of second-place man Michele Alboreto, who was still over a minute in arrears. By Senna’s own reckoning, one of his greatest wins.

The statement of intent. For those who had not being paying attention to Senna’s exploits in British F3 the previous year, this was his coming out party. Dragging the largely unheralded Toleman up from 13th, he was catching Prost’s McLaren in the pouring rain when the race was red flagged. Yes, Mansell should’ve won (careless shunt aside) and yes, Stefan Bellof was even faster in the Tyrrell.  But that performance, in only his sixth Grand Prix, in an at-best-midfield turbo car, was special.

This poll was a victory for the soaking Donington race almost as emphatic as Senna’s in the race itself. By now the story’s clear; in fifth place entering Redgate, he passed Schumacher, Wendlinger, Hill and Prost on the first lap, before winning a race that the otherwise dominant Williams team badly fumbled.

A great win, certainly, but as Nigel Roebuck once asked him, Senna’s best?  “No way! I had traction control! OK, I didn’t make any real mistakes, but the car was so much easier to drive. It was a good win, but compared with Estoril ’85, it was nothing…”