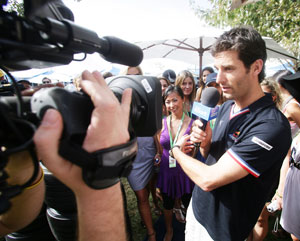 My Editor has asked me to approach my weekly blog in a different way. He’s the Boss, so I will. He wants me to be more controversial, nothing too extreme you understand, but just a bit more opinionated, perhaps. Also, he would like me to keep it shorter. So here goes.

My background is in commercial television so I am at least a little qualified to have a view on the news that the BBC is to renew its association with Grand Prix racing from 2009. On first hearing the news – I was not in bed at the time like my friend Murray Walker – I was not so very surprised. Not because I thought ITV was doing a bad job but because I knew the BBC was keen to get its hands on a major international sport at a time when almost all other sport seems to be slipping from its grasp. I was aware too, that ITV was determined to capture as much top line football as it could afford in the knowledge that the big European games are very popular with both advertisers and viewers alike. So, the news that the BBC had done a deal with Mr Ecclestone and that ITV had beaten its rivals to the best of the European football pretty much confirmed the rumours that have been swirling around in recent months. 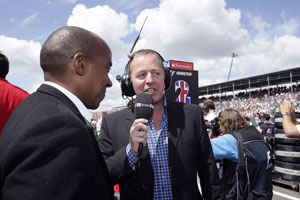 I look forward, as most people do, to watching a Grand Prix without the tiresome interruption of mortgage and mobile phone advertising. I am not, however, convinced that the BBC, as it is today, will do a better job of the actual race coverage than ITV is already doing. I say this because – apart from their irritating obsession with Lewis Hamilton – I think ITV has done a generally excellent job of televising Grand Prix racing to the general public. Of course the real racing aficionado will never be entirely happy because he or she probably knows as much about the sport as those who front the programmes. The coverage is not primarily created for us real, long-time enthusiasts – it is designed to appeal to a far wider audience and this, I believe, it has succeeded in doing. 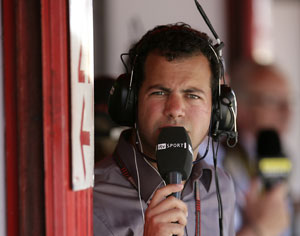 I simply wonder if the mooted ‘Top Gear’ approach to Grand Prix racing will work. The Clarkson/May/Hammond take on life does work for ‘Top Gear’ and its loyal audience. But the complex business of GP racing requires, in my view, a more studied approach. We get this on ITV from both Martin Brundle in the commentary box and Ted Kravitz (above) in the pits. Martin knows his stuff and delivers it in pithy and humorous style while Kravitz gives us the facts and figures we need. When he doesn’t know something, he finds the answer. Commentators are always in the firing line and I know from experience just how hard this job can be. James Allen may not have the populist appeal of Murray Walker but that is not the point any more. He, like us, is an enthusiast and his partnership with Martin Brundle may well be a safer bet than the rather more tabloid approach of Messrs Clarkson and Hammond, should that come to pass. Call me contrary, but I also think Louise Goodman does a great job behind the scenes. Tell me when she last missed getting hold of a driver just retired from a race.

I prefer Steve Rider on my football coverage but whatever he does in front of a camera, he’s totally professional. If I had to knock the ITV F1 show, I would only ask for less news on Hamilton and more news about the other 21 cars and drivers. Yes, I know Lewis is a remarkable new discovery – and a refreshingly raunchy racer – but even Manchester United is so much more than Cristiano Ronaldo.

But it’s a done deal, a deal that Mr Ecclestone finds to his liking. Let’s just hope the BBC brings something really special to the party apart from the largely unwanted “added value” of podcasts, mobile phone updates and Internet streaming. Most of us watch on telly. And I do know that throwing the ‘Top Gear’ format at Grand Prix motor racing will not be the answer.