Formula 1 will axe its podium ceremony, allow a minimal number of team members onto the pre-race grid, and feature videos in place of mascots as it adopts temporary measures to limit the risk of catching Covid-19.

Instead of celebrating with a traditional post-race champagne shower, the top three drivers are expected to assemble on the track in front of their cars.

The details follow new guidance from motor racing’s governing body, the FIA, on how racing can continue safely while coronavirus remains a threat.

As well as disrupting a single race, a virus outbreak in the paddock could seriously derail plans by F1 and other series to cram the current season into four or five months of the year.

Just one confirmed coronavirus case at the Australian Grand Prix was all it took to shut the race down.

An FIA document, titled Return to Motorsport Guidelines sets out suggestions, which include starting from the pitlane to reduce the possibility of contact between crews on the grid; setting up bubbles of staff who would work together in a group and minimise contact with other members of their team and the wider paddock; and revising the podium ceremony.

Back-up teams, which are kept entirely separate to the race team are also offered as an option. These could replace any group with a confirmed Covid-19 case.

Formula 1 has already discussed plans to extensively test all paddock members and to travel together, isolated from the public. It has responded to the FIA document and revealed more details of the changes that it will be making to enable racing to continue.

Ross Brawn, F1’s managing director of motor sport, said: “The practises we have had in the past just can’t be done. The very packed grid that was a feature of F1 racing just can’t happen.”

Ahead of the race, cars will still assemble on the grid, but it will be a far cry from the celebrity- and camera crew-packed scenes of previous years.

F1 says that “minimal numbers of people will be allowed on the track and drivers won’t be lining up alongside grid kids – now known as Future Stars. “Things like the national anthem, you can’t have all the drivers grouped together and you can’t have our Future Stars stood in front of them,” said Brawn in an interview with the in-house F1.com website. “The Future Stars will still be part of the show virtually. They will have the uniforms sent to them and they’ll send us videos of them with a message which we can play so there are lots of things we can do to make it entertaining.”

After the race, there won’t be a visit to the podium at all, said Brawn. “The podium procedure can’t happen [as it does now], but we’re looking at doing something on the grid after the race. One option would be to line the cars up on the track and the drivers will stand in front of cars.

“We can’t present the trophies, as you can’t have someone in close proximity presenting a trophy, but we have worked it out, we have plans and procedures, we’re looking at how we can present it on TV.”

The FIA guidelines give further indications of what may change for the first races of the season but are not mandatory.

Much of the advice involves controlling risk in the first place, with a cut-back paddock. As well as limiting staff at the track to essential personnel only, this may also involve fewer temporary structures at circuits, to reduce the time and staff required to build them.

It could mean that the usual hospitality constructions are absent from early races, although they may come in useful to maintain distance between staff.

Grid procedures are given as an example of where the format of events could change, either being cur down – as with Formula 1 – or abandoned all together.

“Holding cars on the grid for an extended period prior to the start of the race can generate critical points where social distancing measures cannot be respected,” the document states.

“It could be considered to remove the grid procedure from the event schedule and start the formation lap from the garages.

“Suitable mitigations could be to limit the time of the grid procedure (less than 15 minutes) and the number of personnel allowed to work on the car on the grid, thereby significantly reducing the number of close contacts.”

Attempts to press ahead with the Australian Grand Prix in March were eventually abandoned when a McLaren team member tested positive for coronavirus.

To prevent a similar scenario being repeated, the FIA is calling for teams to keep staff working together in small groups and to identify understudies who could step in in if a fellow team member is unwell.

The document also raises the possibility of forming back-up teams who remain isolated and away from the track, but ready to replace the first team if members test positive for Covid-19. 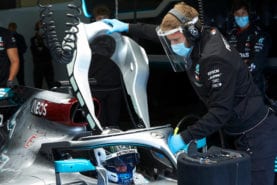 Mercedes has conducted a private test ahead of F1's return in July, with pit crew and drivers in masks

The FIA says that the idea may be “prohibitive” for a number of reasons, not least the number of people needed, but could be required if a series wants to keep a tightly-packed season on track. Several team members may need to be quarantined for 14 days if an infection is confirmed.

Because social distancing isn’t possible for all team members, the FIA suggests that teams work in bubbles. Staff will have contact with people in their bubble but avoid those in other bubbles – just as households are separated under the national lockdown policy.

Sub-groups are suggested within teams: the pit crew, data analysts and driver plus assistants could all be kept separate, for example.

Maintaining these bubbles may mean that teams have to take on more tasks, such as cleaning their pit area to avoid coming into contact with circuit staff.

Expect to see far more masks and other protective equipment at races too. Mercedes tested its one measures this week, where all staff wore masks – including drivers, when not in the car – and an additional visor was worn by the person strapping the driver in.