Delirium is usually reserved for parc fermé at Albert Park, where the race winners celebrate victories that kick off a new season in the perfect manner.

But on Friday in Melbourne this year, delirium came in the form of 34 hours without sleep. For teams, officials and journalists – a paddock bubbling with incandescent rage at the Australian Grand Prix developments.

On Tuesday, the COVID-19 situation was starting to escalate. But greetings between various team members and Formula 1 personnel by the baggage belt in airport arrivals were largely comedic attempts at touching elbows or feet or pretending to bump fists. There was even a salute or two.

One case within the paddock and the event would come crashing down. Surely the sport had accounted for such a situation?

The challenges to the coming F1 season were increasingly obvious: flight schedules between Melbourne and Bahrain for the following week’s race were being changed, and logistics for the second round looked to be an issue. But there was an air of confidence that Australia was going to be fine.

Fast forward a day and suddenly the reality of the situation hit home for everyone. Haas had two team members self-isolating after showing symptoms of coronavirus, and McLaren also had one. Results were due back on Thursday, the first official day in the paddock (although many had been present to see Renault’s new title sponsor and livery unveiled on Wednesday).

That night, the talk was was of just how much of a tightrope F1 was walking. One single case within the paddock and the whole event would come crashing down. But surely the sport had accounted for such a situation, hadn’t they?

Even if both F1 and the FIA had been naive enough not to prepare prior to the first tests being required, having team members in self isolation was as clear a wake-up call as you could wish for.

So as Thursday developed and more tests were required on paddock members, the assumption was that a response was prepared for every eventuality – as it was for other major sport series. The NBA was so ready for a case that it instantly suspended the whole league just before tip-off of the affected game. That doesn’t come on a whim.

Lewis Hamilton was certainly prepared. He knew he would get a question about the virus situation, and he wasn’t going to hold back. “Really very, very surprised,” that F1 was in Australia, facing a packed press room that was “really shocking” and an overall view that the risky commitment to racing showed that “cash is king”, there were soundbites galore.

But it wasn’t about getting a headline from Hamilton. There were widespread nods of approval and words of praise, because the six-time world champion was speaking his mind, and was making a lot of sense.

F1 was playing with fire by being in Melbourne, but collective responsibility had to be taken because we’d all committed to the trip with hope it would pass by smoothly. By the end of Thursday, there was only one organisation that appeared willing to take any responsibility and that was McLaren.

As soon as his team had communicated the positive test for coronavirus of one of its employees to the relevant health authorities, Zak Brown withdrew it from the race weekend. In what could be a really close midfield battle, he admitted the racer in him found it one of the hardest decisions to make, but the CEO found it one of the easiest.

And that’s because Brown was doing the only sensible thing and removing his team from a paddock that looked like having the potential to be a disaster zone once the first case was confirmed. Teams, organisers, media and the FIA all work in such close quarters that contact is almost impossible to avoid.

The announcement from McLaren dropped at nearly 10.30pm local time. Brown had given no warning because he had a clear plan of action in place. The same was expected of F1, the FIA, and the race promoter, the Australian Grand Prix Corporation (AGPC), but there was nothing.

And I mean, nothing.

What proceeded to follow was one of the most pathetic episodes of crisis management I have ever witnessed. The very obvious worst-case scenario had come to pass, leading to a team pulling out of the race, and a Tweet from F1 stating it was analysing what to do next was all that surfaced.

Formula 1 and the FIA have have been coordinating with all the relevant authorities on the next steps. Our priority is the safety of the fans, the teams and all personnel at the race.

The teams convened quickly at the Crown Hotel on the Southbank in central Melbourne. Instead of backing McLaren’s stance and taking the same one to protect their members, a long meeting led to a split vote over whether to continue or not with the weekend.

Uncertainty over the outcome was media-driven for a little while, before Formula 1 sources and a number of team members insisted the race was to be cancelled.

An official statement was expected from F1 between 3 and 4am – by now the night was getting away from everyone.

But the whole situation then descended into farce. The statement never materialised as meetings took place and nobody was able to agree. The teams couldn’t unanimously decide not to race, and all three of F1, the FIA and the AGPC pointed the finger of responsibility at each other in a game of chicken to avoid footing the bill.

The number of parties involved slowed the process down rapidly, and just served to highlight a lack of due care and attention.

Just one or two cases of coronavirus were deemed to be fine if the afflicted hadn’t come into contact with too many other people. Then the approach might be to just sweep them under the carpet and try to overlook the fact that during a pandemic, the virus had found its way into a tightly-knit circus that travels the world. Oh yeah, and one that just happens to be based in a major city for the weekend.

McLaren had forced the race’s hand and everyone knew it, but nobody from F1 or the FIA had the courage to stand up and do what needed to be done.

The lack of any information dragged through the night, and then – in a further twist – a local health meeting loomed into view in the early morning that would provide fresh advice to the race organisers. That advice was take the race behind closed doors or call it off completely. 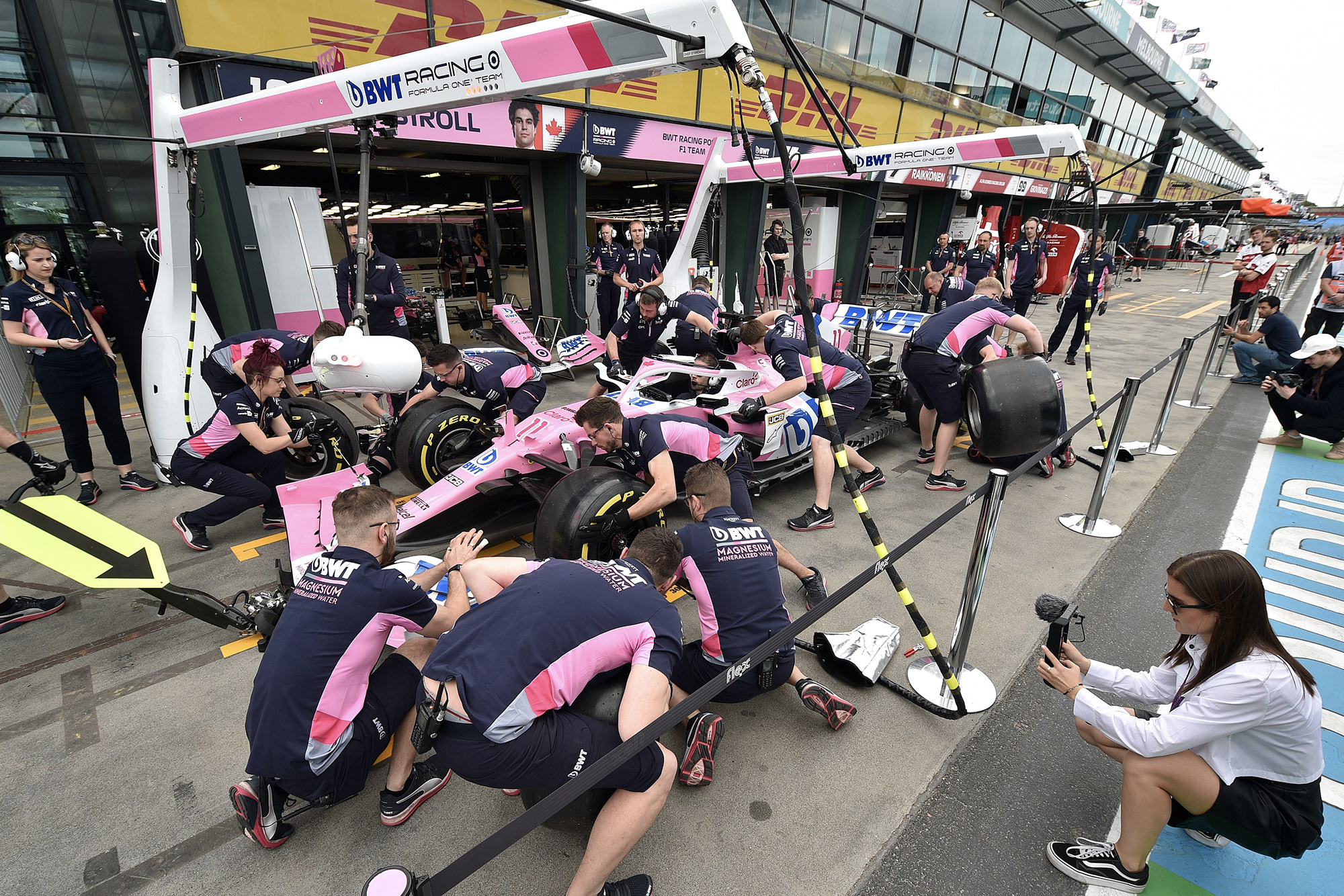 Still no information was provided, meaning teams and media all started to descend on the circuit – the very place the positive case had been – without knowing what they were supposed to do. Some teams practised pitstops, others practised their packing, but the lack of any word from the FIA and F1 meant a second team felt the need to add weight to McLaren’s initial hit.

Renault had not headed to the track; Mercedes and Ferrari had suggested they would not not roll out for FP1 if no action was taken. By this time, Sebastian Vettel and Kimi Räikkönen were already on a plane out of there.

To avoid matters getting that far, the defending champions – who at one stage appeared willing to continue – wrote a letter to both Liberty Media and the sport’s governing body calling for the race’s cancellation on safety grounds.

Finally, confirmation emerged that the race was off. But not before thousands of ticket-holding fans had arrived, congregated outside in the sort of mass gathering that authorities had wanted to prevent. 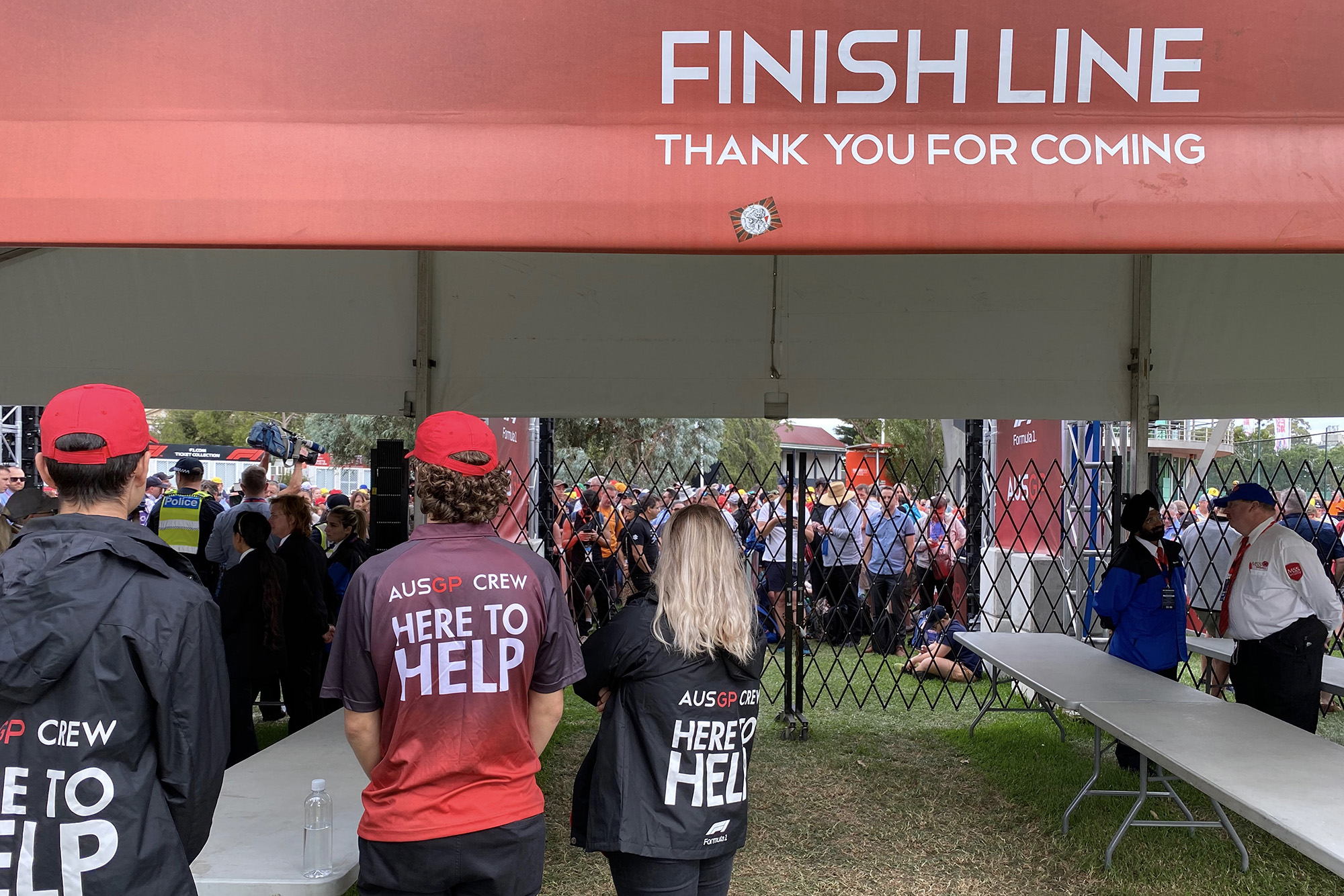 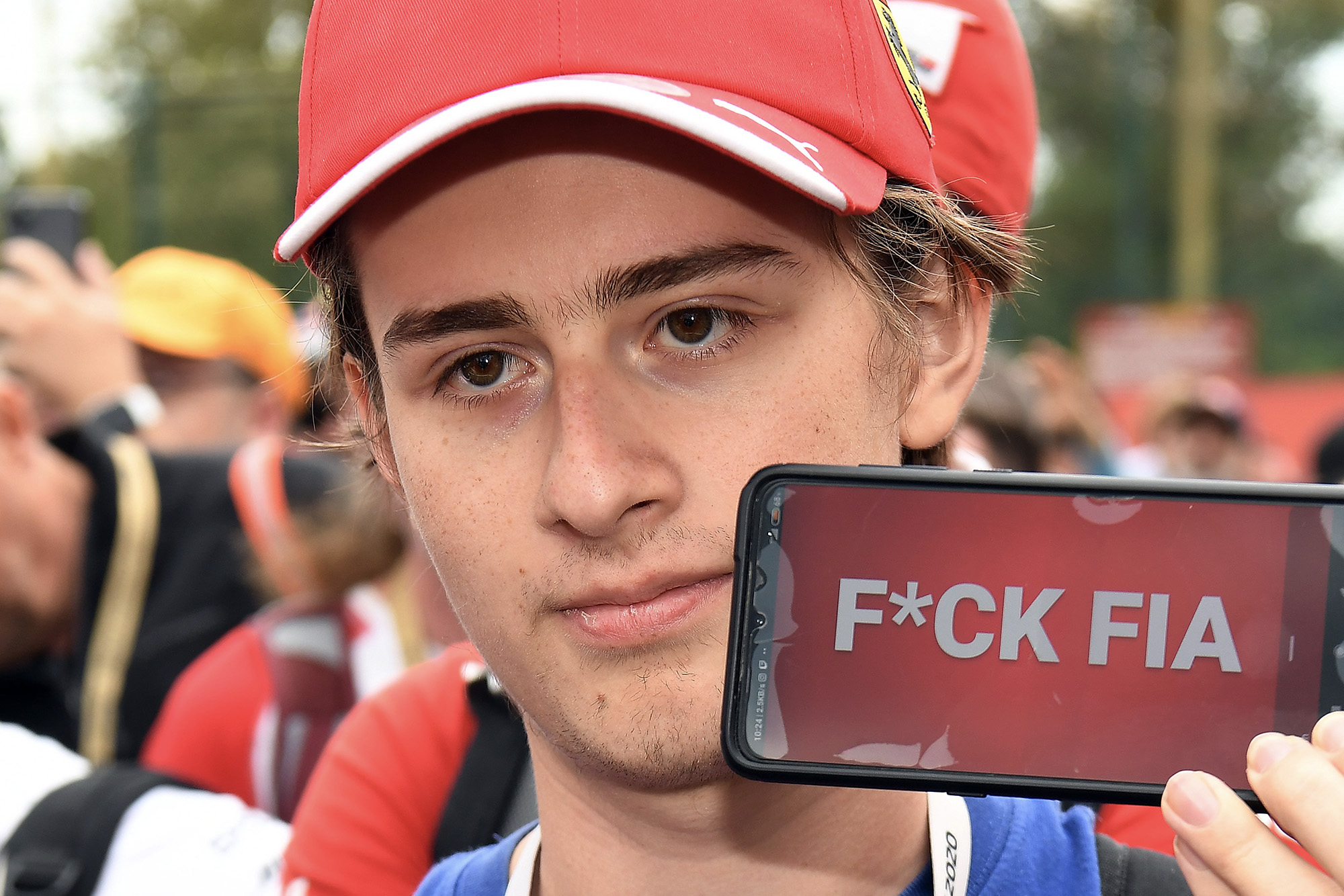 After a Thursday spent delivering a corporate line of having “trust in the FIA and relevant authorities”, there was a distant lack of the t-word in team statements following the cancellation, one that had at one stage looked in doubt.

The statement from the AGPC firmly placed the emphasis on F1 for cancelling the race, and in a later press conference it became clear that the details of exactly who pays for the shambles still needed to be thrashed out. A clear lack of responsibility remained, but at least refunds for spectators were confirmed.

That press conference was, of course, a gathering of hundreds of people in a close area, which just accentuated the lack of awareness of the situation. That Chase Carey and Ross Brawn both spouted similar lines that F1 had dealt with the situation well only magnified that disconnect with reality. 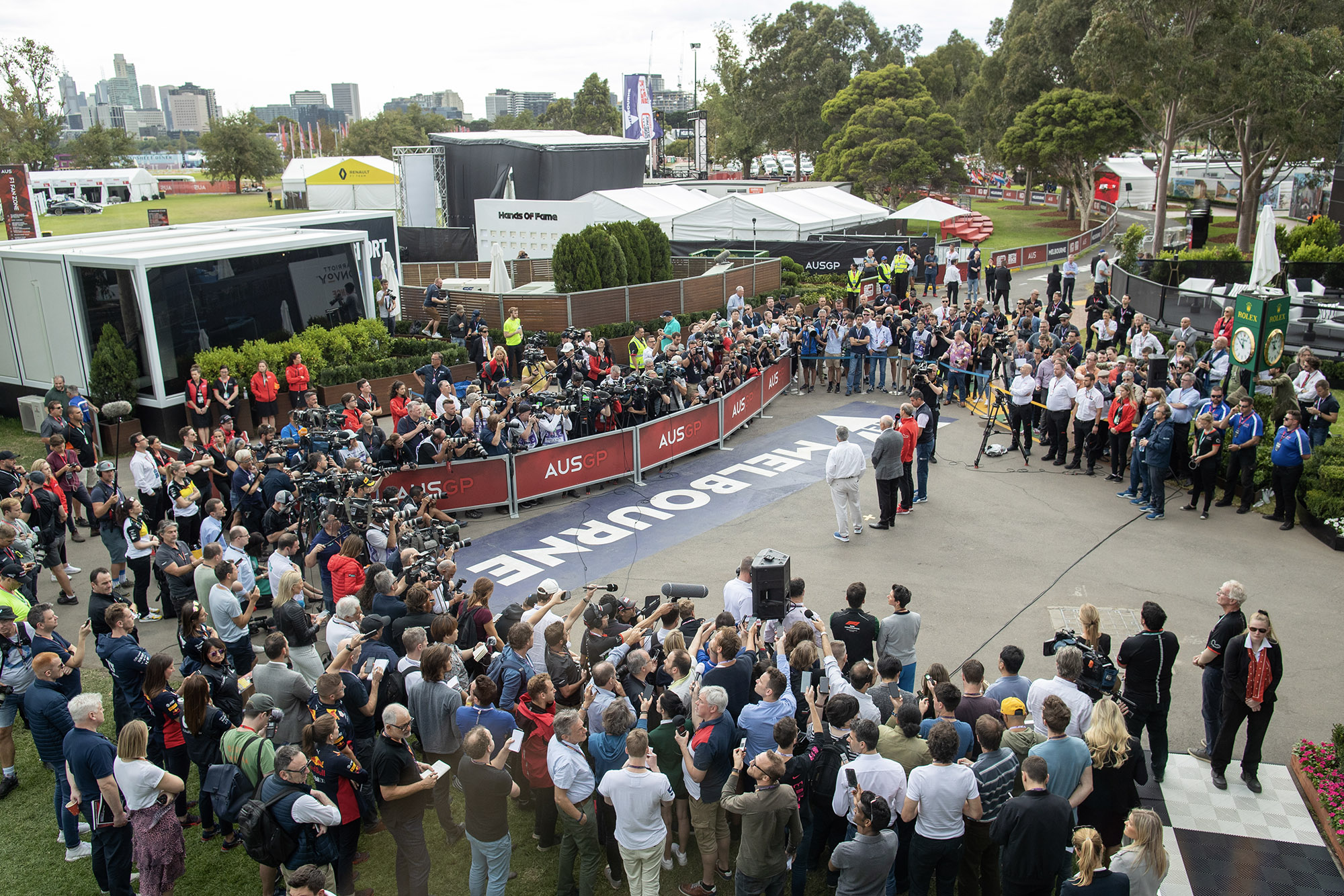 This was a shameful episode for the sport that it can’t afford to repeat, as the paddock scarpers from Melbourne on the first available flights.

It leaves at least 15 from McLaren behind in quarantine and the promoter of a major event picking up the pieces, all while — for sveral hours — a CEO remained unwilling to make a decision on the following round starting six days later, thousands of miles away.

There’s a world outside F1’s little bubble that is not carrying on as before, and the bubble might have burst for most but the leaders still seem intent on trying to hide within it.