‘Beat your team-mate’ is as old as the sport.

As racing motifs go, it’s up there with: ‘To finish first, first you must finish’ and ‘When the flag drops, the bullshit stops.’

Team-mate, therefore, is a misnomer. A bit of hate, mate, don’t do no harm. Indeed, it can be invigorating. Think Nigel Mansell versus Nelson Piquet at Williams or Rudolf Caracciola versus Luigi Fagioli (below with Alfred Neubauer in 1935) at Mercedes-Benz. The latter driver – nicknamed the ‘Abruzzi Robber’ despite the fact that he was neither a robber, nor born in the Abruzzo – had a mean streak and allegedly threw a wheel hammer at the Merc number one after a particularly ticklish 1937 Tripoli Grand Prix, by which time Fagioli was racing – and raving – for rivals Auto Union. The hammer missed, but ‘Caratsch’ got the point. (Should that be the blunt?). 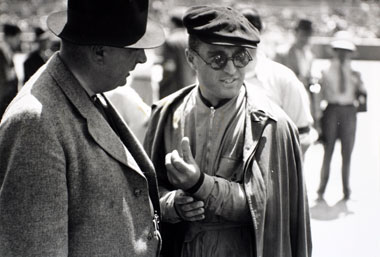 Is this what’s eating Lewis Hamilton? He knew where he was with Fernando Alonso – in a war – and Heikki Kovalainen – down the road. Jenson Button is different. Not only is he being beaten by him, the beating is being meted out in an infuriatingly polite fashion. Jolly fine fellow, ‘Our Jense’, but is he cranking up the niceness, old chap, because it’s getting to his team-mate?

Doing ‘battle’ with Button when he’s in this mood is akin to nailing jelly to a wall, or pushing water uphill. He is undoubtedly smoothly dictating terms at McLaren and Hamilton can now only play him at his own game: rev himself up without reaching ragged, which, given the current regulations, means ‘Game over!’ It’s a fine line that he must tread, because buttoning it up isn’t ideal, or his forte, either, and has manifested itself in occasional, ill-advised, sniping blurts that have turned some of his public against him and, more importantly, his (old) team towards Button. 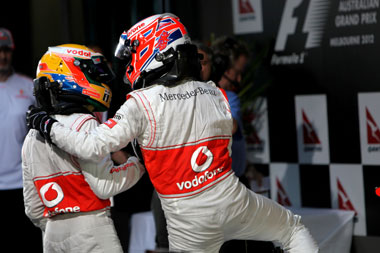 Hamilton needs to redress the balance quickly – become angry in a positive way, even though his mate is giving him no just cause – because Button’s victory in Australia was his most assured, most complete, for McLaren. Prior, Hamilton had been out-gambled, out fumbled and occasionally outpaced by Button, but even during his dark days of 2011 he was able to cling to the fact that he was widely deemed to be the faster of the two. That honour, though, was annulled the moment that Button jumped him at the start in Albert Park – and Hamilton, surprisingly tamely, acceded. Judging by his post-race demeanour, Hamilton’s pre-season assurances of a Spring-cleaned headspace are in danger of being rapidly cluttered, then junked. 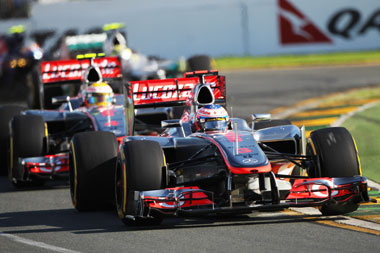 McLaren’s will be the most important internecine battle of the season, but it might not be the most intriguing, or the most fraught. That could be Toro Rosso’s. Have two young guns ever before been handed an opportunity to scrap for such an obviously fabulous prize: Mark Webber’s seat at Red Bull? That’s not guaranteed 100 per cent – Webber might yet become world champion, or Hamilton might soon be fancying a switch of team for 2013 – but it’s still a 23-carat carrot.

In theory, this was the case for Toro Rosso’s previous incumbents, Sébastien Buemi and Jaime Alguersuari, too, but their recent summary dismissal – and Webber’s 2011 plunge in form – have honed a much sharper edge on the new deal. Certainly, Daniel Ricciardo and Jean-Éric Vergne generated more excitement in one GP than since Sebastian Vettel graduated with honours from the Faenza-based team at the end of 2008. 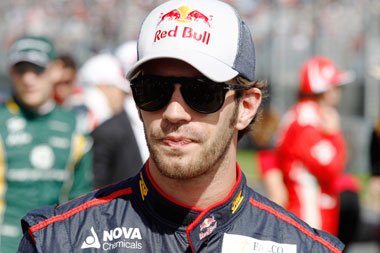 Ricciardo, the easygoing Aussie with an Italian passport, has been shadow-boxing his more intense French Formula 1 team-ahem-mate for several seasons. Each have finished second in the Formula Renault Eurocup, strung together dominant British Formula 3 campaigns – both with the excellent Carlin Motorsport – and been runner-up in the Formula Renault 3.5 Series. Vergne, not quite a year the younger, has been doing the chasing – and still is because of Ricciardo’s half-season F1 stint with HRT – but it’s too close to call now, as Australia proved: a tenth in Q2, and three in the race, with Ricciardo getting the nod each time.

F1 has been light on B-teams, the need for them generally obviated by junior formulae. Scuderia Sant’Ambroeus, commanded by the Machiavellian Eugenio Dragoni, ran a semi-works ‘Sharknose’ Ferrari for rookie Giancarlo Baghetti in 1961 – the wealthy Milanese sensationally won his first three F1 races in it before fading into obscurity – while Milan-based car mechanic Lorenzo Bandini tarried at the wheel of Scuderia Centro Sud’s uncompetitive Cooper-Maserati. (It would be Bandini whom Dragoni dragged to Ferrari in 1962 when he became Enzo’s team manager.) 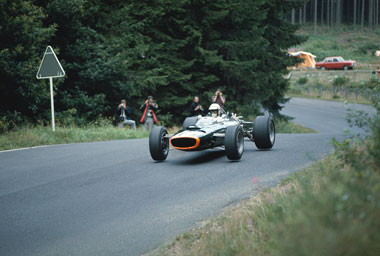 Reg Parnell’s privateer team was BRM’s F1 wet nurse for a time. It ran British F3 hotshots Chris Irwin (above in the 1967 German Grand Prix) and Piers Courage in 1967, but never at the same race. The former usually got the nod, was handed an unwieldy H16 as a ‘reward’ for this effort, and impressed some more by causing a disillusioned JYS embarrassment at the French GP: Irwin was quicker than him in the nimbler Tasman-spec P261 V8 and the H16 at the ‘Mickey Mouse’ Le Mans ‘Bugatti’ circuit. His career-ending crash in practice for the 1968 Nürburgring 1000km left us with a compelling what-might-have-been.

Off the top of my head I can think of no other obvious candidate for this Svengali role until Giancarlo Minardi entered F1 in 1985. This enthusiast found space in his heart, budget and team to school Italians Nannini, Fisichella and Trulli in the ways of F1. This theme was continued by Paul Stoddart, the team’s owner from 2001 – witness Fernando Alonso and Webber – and by Toro Rosso since 2006.

Something similar is occurring this season at Force India and Sauber. The former’s Nico Hulkenberg and Paul di Resta could perhaps be seen to be manoeuvering for Michael Schumacher’s seat at Mercedes-Benz, while Sergio Pérez, a Ferrari Driver Academy alumnus with money to burn and an uncanny knack of keeping his Pirellis cool, might follow the same Sauber-to-Scuderia route that a somewhat wilder and woollier Felipe Massa navigated in 2006. (This might happen sooner rather than later if the likeable Brazilian doesn’t pull his finger out.) The engagingly opportunistic Kamui Kobayashi could easily blow team-mate Perez’s campaign off course, of course, but it’s hard to imagine there being a Ferrari drive for him at the end of it.

Nope, Toro Rosso’s is the one to watch, as they each keep a glad eye on that ‘prize drive’ and their necessarily evil others on the far side of the garage. Oh, and one on the road, too. Tricky business, team-mates. Unless you’re Jenson Button of 2011-’12 vintage.