Racing, and all competitive sports, are, among other things, about winners and losers.

On Sunday at Spa-Francorchamps, it was questionable whether anyone could count themselves as a winner. Not even Max Verstappen. Or George Russell who joined him on the podium ahead of Lewis Hamilton.

“Obviously not the way I’d have liked to have scored my first podium,” Russell said. “A little bit of a strange feeling achieving it in this way but at the end of the day we’ve been rewarded for such a fantastic job yesterday. 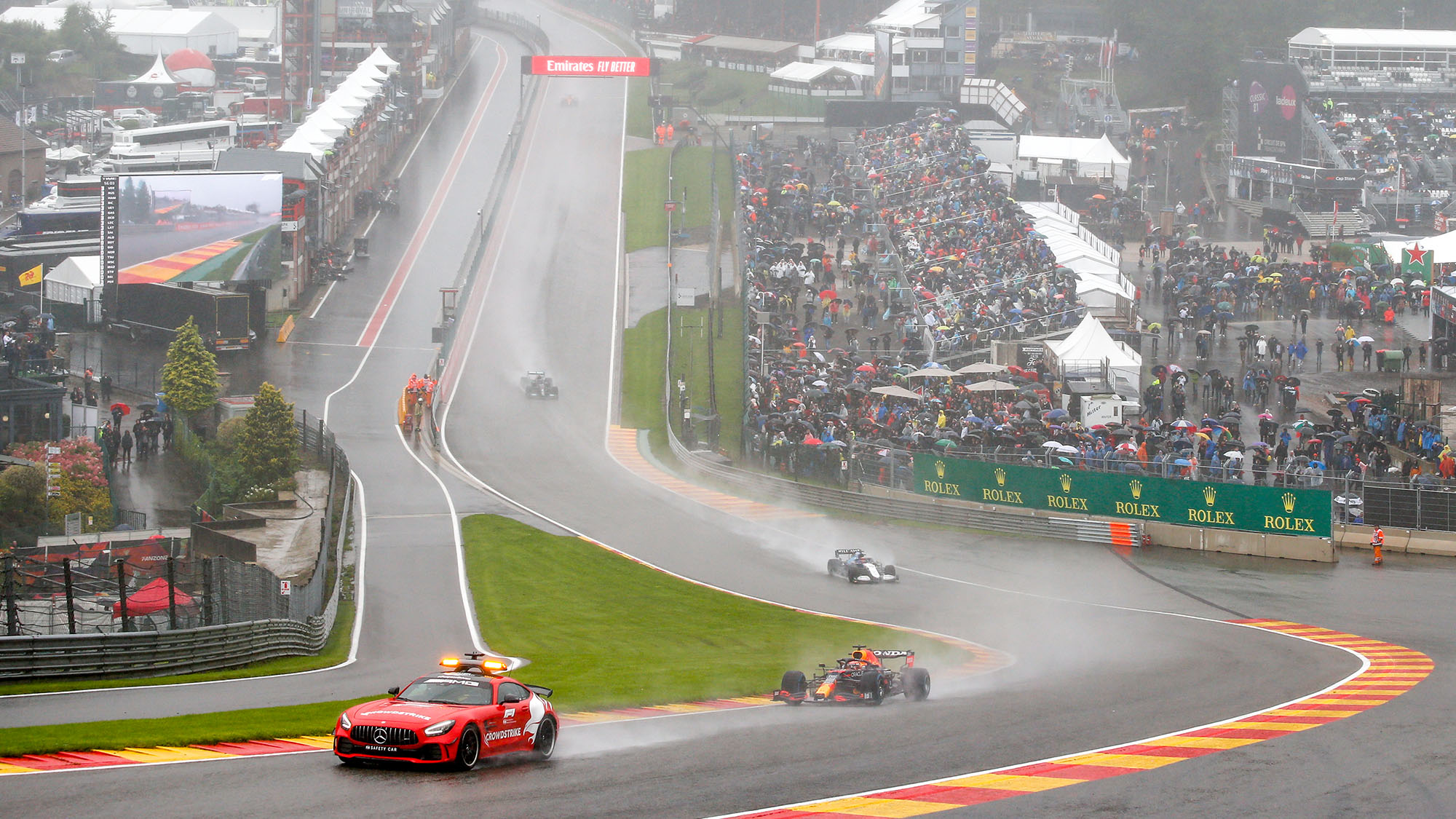 I’ll let George off slightly for his enthusiasm given he was officially awarded his first podium and his qualifying performance was quite frankly sensational, but there were clear losers who needed thinking of first and foremost, and that was the fans who spent hours in the cold, wind and rain, only to see cars crawling past them a few times behind a Safety Car after a near three-hour delay, in what was ironically described as a “race”.

At least that wasn’t something that was lost on the drivers. Russell himself did reference it, but Hamilton was most vocal about it.

“The fans were robbed of a race today. They probably should get their money back.”

“It’s a real shame,” Hamilton said. “We obviously can’t control the weather. I’m sure all of us love racing in the rain, especially here in Spa. It’s one of the greatest circuits in the world. I think today, I think just really disappointed for the fans.

“They stood out there for absolute hours in the rain, no covering in the grandstands – I think maybe on the pit grandstand there is – but cold and wet and particularly the kids. More importantly, they had to spend so much money with travelling, accommodation and then they didn’t get a race.

“Unfortunate, and I’m a little bit confused as to why they restarted the race because between the two hours when they stopped us the first time to the last time, there was no change in weather. But… yes… I mean I know why, but I do feel the fans were robbed of a race today and I think they probably should get their money back.” 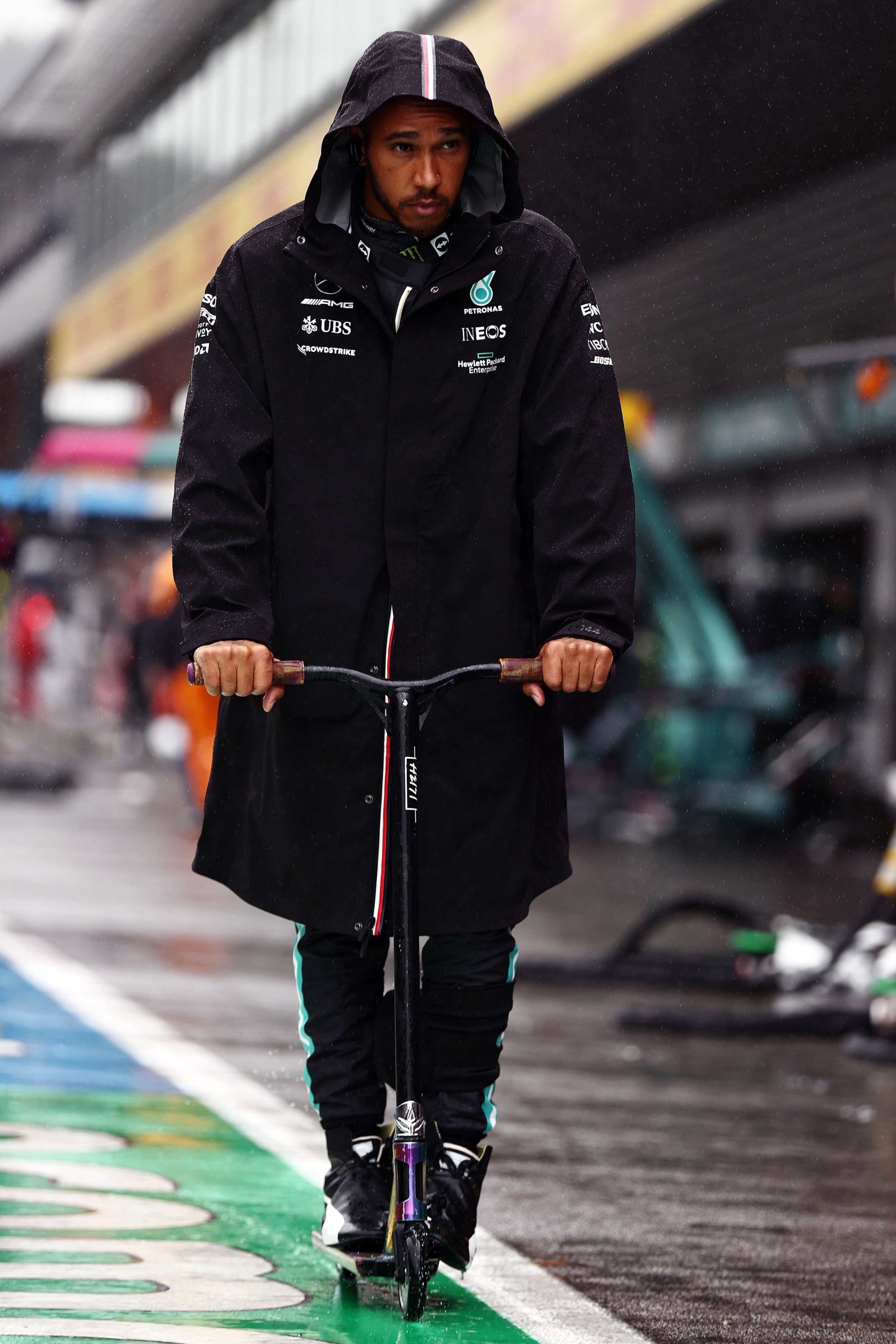 Hamilton scooted between pitlane and paddock during the rain delays

Hamilton would even expand on why he felt the afternoon panned out the way it did, questioning the commercial motives that could have been at play rather than the sporting one.

“There was no point at which we could race so there wasn’t a race, but there is a rule that says for it to be a legal race, it has to be – I think – a minimum of two laps so they knew that and they sent us out for two laps behind the safety car and that activates a bunch of things and I don’t know all the politics and the background.

“But my most concern is that the fans should probably get their money back, I think. And I don’t know if by doing the two laps it means they don’t and that’s… I just don’t think that’s what we want. We have better values than that as a sport.”

The official Belgian Grand Prix ticketing website states that no refunds are available unless the event is cancelled but leaving aside the commercial argument for another day, Hamilton raises a fair point saying there was no racing, so it wasn’t a race. But he didn’t focus on it, even though he lost points in the drivers’ championship to Max Verstappen.

Unsurprisingly it wasn’t a view fully shared by the driver who got to stand on the top step of the podium.

“Now in hindsight it was very important to get that pole position but of course it’s a big shame to not do proper laps but the conditions were very tricky out there,” Verstappen said. “I said at 3.30pm ‘let’s go’. I think the conditions were decent but of course the visibility was very low so I think if we would have started at 3 o’clock we had a better chance, but nevertheless after that it just stayed really wet and it kept raining.

“Of course it’s a win but it’s not how you want to win. I think today big credit goes to all the fans around the track, to stay here the whole day in the rain, in the cold, windy conditions, so I think they are actually the bigger winners today.” 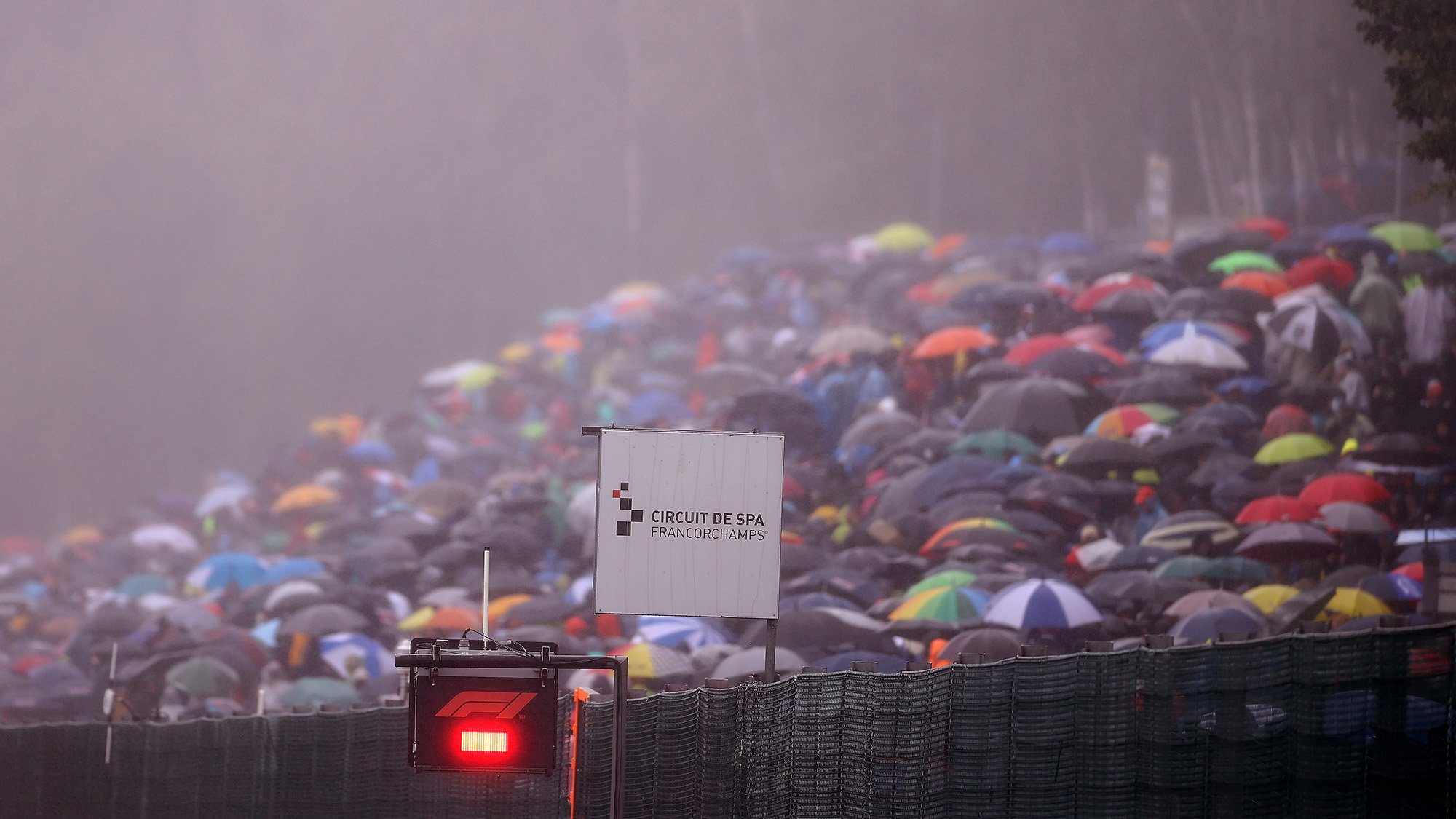 The winning feeling: fans endure the rain as cars remain in the pitlane

It’s debatable whether you can call the fans winners for what they had to endure, and it’s debatable you can call it much of a race win given the only laps were processional by regulation. As much as Verstappen deserves the biggest reward of the weekend for coming out on top in the only competitive session, there was nothing competitive about Sunday.

Even those who did well out of the situation were not comfortable with it, with Pierre Gasly’s sixth place providing him with a further three points. 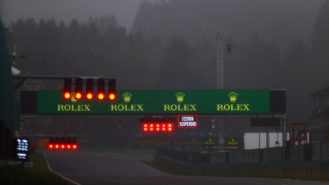 Max Verstappen has won a washed-out Belgian Grand Prix after completing just three racing laps behind the safety car. George Russell was classified second for a career-first podium, ahead of…

“But at the end of the day  this is not really the point – I feel like really bad for all the people that came here, travelled, waited hours under the rain to watch a Formula 1 race, and the only thing they got to see is a couple of laps from the safety car and F1 cars following. Really sorry for all those people.

And like Hamilton, Gasly was left pretty sceptical about the reasoning as to why there were any safety car laps at all.

“To be fair, yes [half points are wrong] – I think the whole point of getting the points is based on the race. I’m a bit surprised to be fair because I just feel they just put us out on track in the worst conditions at the end to get these three laps behind the safety car, when actually it was worse than before, just to allow these points to happen.” 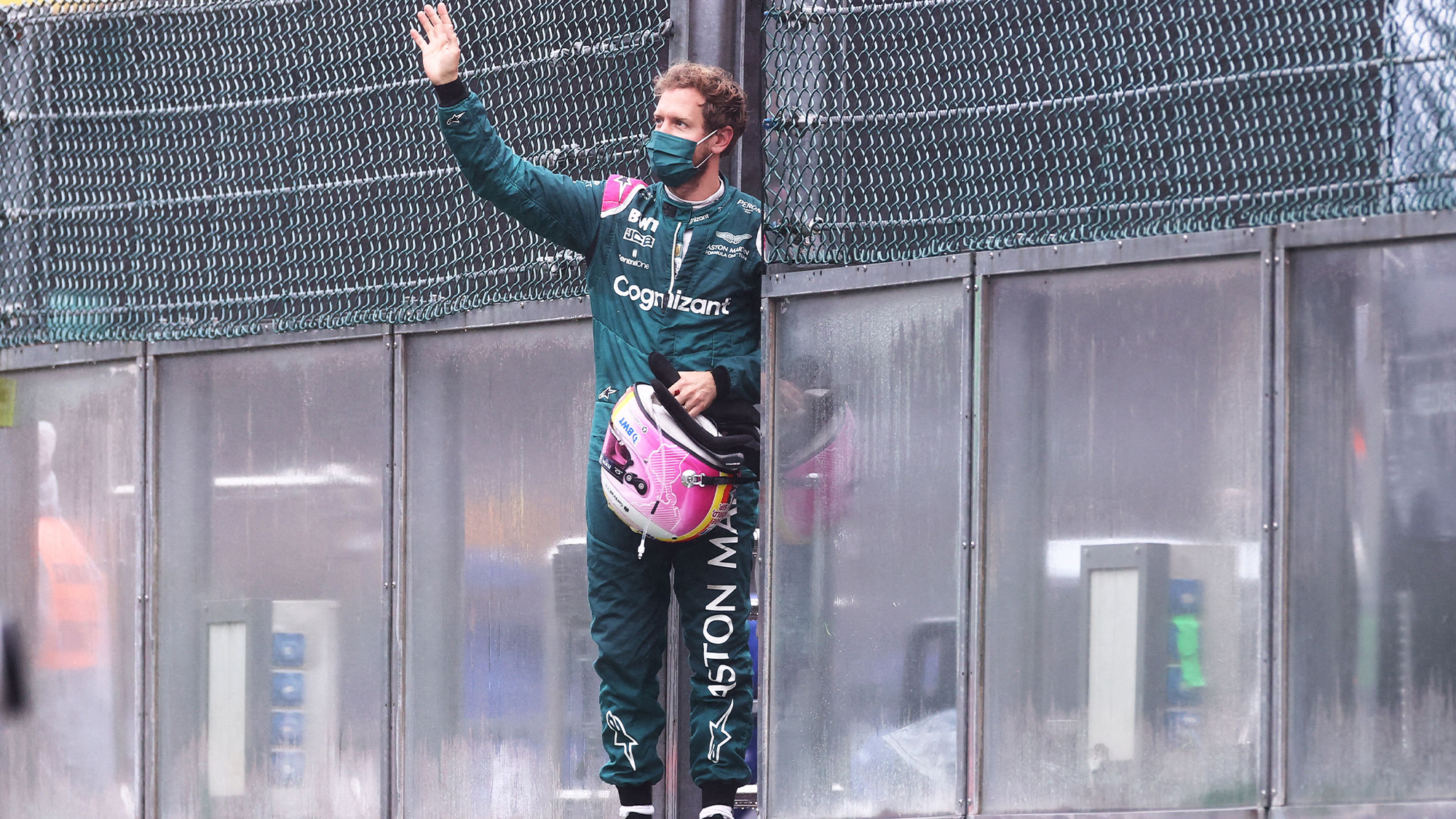 Vettel waves to the Spa crowd

Perhaps the strongest words came from the driver who had provided a scathing assessment of the way the FIA ran qualifying on Saturday, with Sebastian Vettel calling for a red flag before Lando Norris crashed early in Q3. Those words were heeded with the safe approach taken to the conditions on Sunday, but to get two laps in behind the safety car to ensure those who qualified well – like himself – were rewarded? He wasn’t impressed.

“What did we do today? I don’t know. I thought you had to do 25 percent of the race to get points? See how old I am!”

There have been plenty of thrilling chapters to the 2021 season so far, and a lot of highlights to look back on. But Spa certainly can’t count itself as one of them. 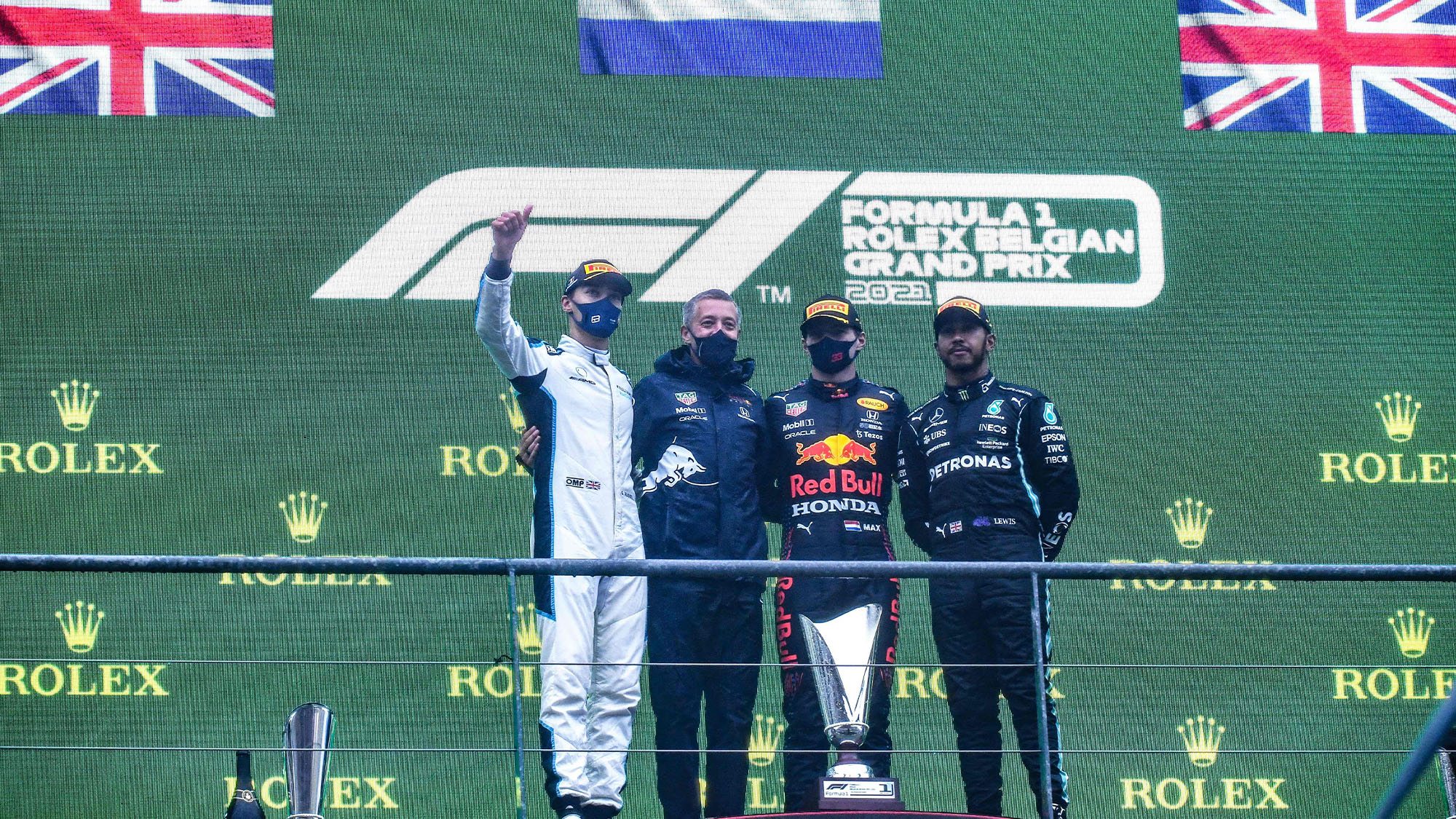 Muted celebration on the Spa podium