In the third and final part of this mini-series, we look at the team-mate comparisons of Fernando Alonso 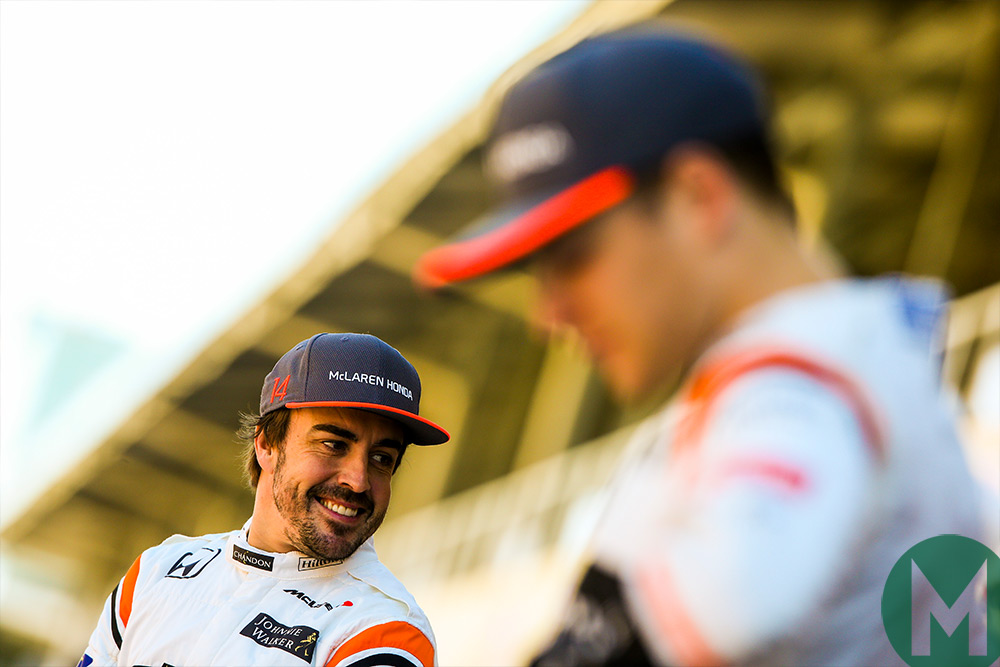 In 2017 he was the dominant force within McLaren against the highly rated rookie Stoffel Vandoorne, just as he has been dominant over every team-mate in terms of results, with the notable exception of Lewis Hamilton in 2007. In qualifying comparison, however, he was narrowly out-performed by Jarno Trulli at Renault in 2003 and very closely matched with him in ’04. Furthermore, the 2015 McLaren pairing with Jenson Button saw them matched to the thousandth of a second over the seven comparable events. Hamilton has been his strongest competitor in the race by race match-up, with Alonso defeating him only 6-5 in the 11 comparable races (54.5 per cent), and next is Button, who Alonso beat in just 57 per cent of the 26 races of straight comparison. Every other team-mate is comprehensively beaten in the race match-ups.

The stand-out qualities of Alonso’s driving are his adaptability to car traits and the pummelling, relentlessness of his race performances. His natural way is to bully the car into slow turns as the downforce is bleeding off – and he has no qualms about getting down and dirty with lots of steering lock and big inputs between turn-in and apex. It is not a pure style in the way of Button, Trulli or Räikkönen, and in a perfectly balanced car he can lose tiny fractions of speed to a more classic driver (see Button 2015). But it’s a style fantastically adaptable to any car trait.

If the balance is naturally oversteery into slow corners, he can induce an artificial understeer with the violence of his inputs. If it’s understeery, he can hustle it in with more than one bite of steering, upsetting the rear to get the initial response, modulating the brake pressure to help. He can keep doing these things all day, in any conditions. That’s a key part to that relentless quality. It’s also what allows him to drag much more from a difficult car than most drivers – and the key case study there is the 2014 comparison with Räikkönen in the awful Ferrari of that year, a car with a weak front end that simply refused to respond to Räikkönen’s small steering angle/modulate the weight with brakes technique. Alonso was typically half-a-second or more faster. The gap would likely have been nowhere near that in a perfectly balanced car.

Although the 2017 McLaren was a nicely balanced – albeit underpowered – car, in the early part of last year Vandoorne was struggling with adapting his technique to it. Brought up in the ART team’s F2 school of set-up that works perfectly there but less so in current F1, he was trying to carry maximum entry speed and small steering input, but the front was surrendering on him. He would frequently be quicker into the corner than Alonso, but would then have to wrestle away too much momentum to make the corner and his mid-corner and exit speeds were invariably down. With a rethink and some engineering help, he devised a better set-up and adapted his driving. Into the season’s second half was generally a much closer match in qualifying. In the races, Alonso’s outrageous opportunism and smart thinking continued to make him the dominant force.