There’s a hot rumour doing the rounds at the moment that Bernie Ecclestone is trying to put together a consortium to buy a significant chunk of F1 – and that Red Bull, Ferrari and potentially Mercedes could be part of that group. It’s unsubstantiated but let’s just go with it for a moment.

If one were a cynic, one might begin to put a few pieces together. The current majority shareholder CVC (with 35.5 per cent) has already gone on record as saying it would dismiss Bernie from his position with them were he to be found guilty of the bribery charge against him in the Munich court. But what if CVC was no longer the majority shareholder? Then regardless of the outcome in court, he could still potentially be in a position to continue to run the sport.

But to maximise his chances of being able to finance such a buying up of shares, reducing the value of the sport would be helpful. How might one go about reducing the value of the sport? Well, you could make a big deal of how the noise of the new cars is awful, for example. You could get close associates to agree with you very publically. Or you might say the quality of the racing was poor. That might do it.

So, in the lead-up to the Bahrain Grand Prix we hear from Ferrari that 78 per cent of its website respondents say they do not like the new F1. Then we hear the concern of both Bernie and Ferrari’s Luca Montezemelo about this fan backlash. But why are they so much more concerned about this backlash than the similar one against double points? If you were a cynic you might say it’s because this one meets their agenda.

If it should unfold this way then they would need to get around the potential problem of corporate compliance of major companies such as Mercedes regarding contracts with those convicted of a criminal offence (if Bernie were indeed to be found guilty).

But if it could be structured in such a way that Bernie was not a signatory within this consortium, but still effectively ran it – as a consultant, say? Would that work perhaps? Would having a different person front the consortium – Christian Horner perhaps – help?

In Malaysia CVC’s Donald Mackenzie had a very public meeting with Ecclestone and Red Bull’s Christian Horner. The following morning Mackenzie and Ecclestone had a long and animated breakfast with Mercedes bosses Toto Wolff and Niki Lauda. Before setting out for Bahrain, Ecclestone met in London with Montezemelo.

Of course it might all be very innocent – and they might simply be putting their heads together to discuss what they are going to be about satisfying all those disgruntled fans. Which do you go for: option a) or b)? 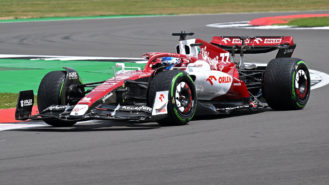