Mark Webber (1st)
A great weekend for the Australian, and for Australians in general as Casey Stoner also won at Phillip Island. The Red Bull looked like the car to have, but crucially Webber qualified well and didn’t put a foot wrong. Thankfully it wasn’t his first win as the podium ceremony was rather overshadowed – apparently there was quite a fuss being made over another driver elsewhere… 10/10

Robert Kubica (2nd)
Whatever Webber did, Kubica managed to stay with him. A quite superb race from the Pole and one that will be making the team at Renault rub their hands with glee. To start eighth on the grid and make it to the podium is no easy task in Formula 1 nowadays, even when so many people obligingly crash. 9.5/10

Lewis Hamilton (3rd)
If Kubica’s run to second was impressive, Hamilton’s run to third from 17th on the grid was inspired. He had the help of KERS to get past a few cars and was also quite lucky with the timing of the safety car after the first-lap mess, but he made the most of it. His race was no doubt a little less stressful than last year’s. 8/10

Sebastian Vettel (4th)
What a tremendous drive. One has to wonder what might have happened if he’d got qualifying right, as with the pace he had Vettel would’ve been right there fighting for the win. Some quite breathtaking overtaking manoeuvres from the German humbled many a driver. 9/10 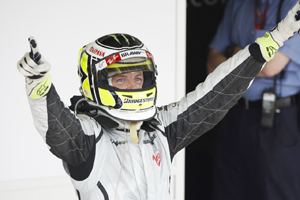 Jenson Button (5th)
Where to start? It looked like the championship was going to the last race of the season after a woeful qualifying session, but the 2009 World Champion showed us exactly why he deserves to be just that. The way he drove was more akin to someone who had nothing to lose, and this fearless approach put him right back in the pound seats. He benefited from other DNFs and an unlucky race from Rubens, but there’s no denying he is a very worthy champion. 9/10 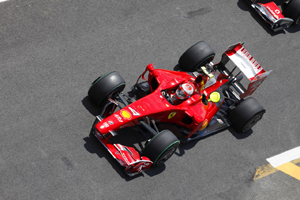 Kimi Räikkönen (6th)
A flying start came to little after he lost his front wing, but Kimi drove a great race thereafter. Not only did he have to stop early for a new nose, but he also had to contend with fuel gushing from Kovalainen’s McLaren – with fuel hose still attached – which briefly set the Ferrari on fire as it left the pits. He casually dusted himself off and carried on to score more points. Please Kimi, sort out a seat in F1 for next year… A very fiery 9.5/10 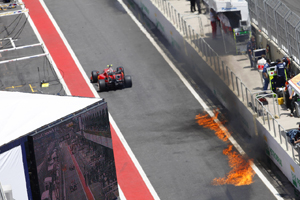 Sebastien Buemi (7th)
A superb qualifying left him sixth on the grid and although he lacked the pace to stay with the race leaders, he kept his nose clean and gave Toro Rosso two more very valuable points. Up to now Buemi had done little to impress, but after that performance I doubt he’ll have trouble landing a drive for next year. 9/10

Rubens Barrichello (8th)
He had to secure a good result here and he knew it. He turned pole into the lead and then raced away after the safety car drew in. But it wasn’t enough, and after his first stop he found himself fighting a losing battle. He’s been off the pace during the race before, but this time it was more costly than ever. A late puncture dropped him further down the points-paying positions – Rubens’ luck in Brazil seems to have changed very little over the last 16 years. 7/10

Kamui Kobayashi (9th)
What a debut for the stand-in Toyota driver. He knew as well as the rest of us that he had to pull it out the bag, as Toyota was keeping a very close eye on him with regards to next year. Weaving into braking zones to defend his position aside, Kobayashi was a breath of fresh air. He was on the pace and certainly not afraid of potential champions. If Button describes him as completely nuts, then I suggest that’s exactly who we’d like to see in the sport next year. 7/10 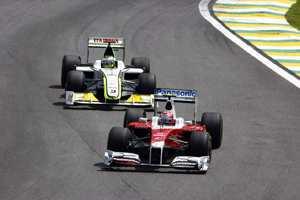 Giancarlo Fisichella (10th)
Sadly, another mediocre race for Fisichella. The Ferrari may be a hard car to get to grips with, but he’s had a few races in it now and really should be further up the grid. 5/10

Vitantonio Liuzzi (11th)
A huge smash in qualifying meant that the rest of the weekend was never going to be a walk in the park. After a gearbox change he started from the back of the grid, and he never looked likely to finish in the points in a fairly action-packed race. 7.5/10

Heikki Kovalainen (12th)
The Finn looked quite quick through practice, but after a bad qualifying session he made matters worse by colliding with Fisichella at Turn 2 on the first lap. He then drove off from his McLaren pit with the fuel hose still attached, and set fellow countryman Räikkönen alight. It was only thanks to the Brawn mechanics that he managed to get out of the pitlane at all. 5/10

Romain Grosjean (13th)
Even though he wasn’t far off Alonso in qualifying, the Frenchman went backwards in the race. It’s early days though and he has the pace and racing brain to make it work next year. 4/10

Jaime Alguersuari (14th)
To say, “I won’t get in the way of Jenson and his championship” before the race is, to me, not something a proper racer would say. He may be trying to keep his nose clean, but all he has to do is look at Kobayashi defending his position to see what he should have done if the other drivers are going to respect him. 4/10

Kazuki Nakajima (15th – RET)
He was going quite well until he misjudged how close he was to Kobayashi when exiting the pits. Clipping the rear of the car, Nakajima lost his front wing and went spinning off into the barrier at quite a rate of knots. Crasher Nakajima strikes again. A sad end to what could have been a good race. 3/10

Nico Rosberg (16th – RET)
Rosberg was driving a superb race and could have even finished on the podium, but a gearbox problem led to a retirement after only 27 laps. A real shame. 7/10

Nick Heidfeld (17th – RET)
What Heidfeld lacks in raw pace he makes up for in consistency, so you can imagine how irate he must have been feeling after his car ran out of fuel. He may have been down the grid in qualifying, but looking at how the BMW was performing in Kubica’s hands a points finish wouldn’t have been impossible. 6/10 (BMW fuel consumption analyst: 0/10) 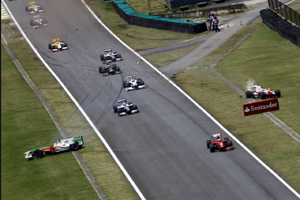 Adrian Sutil (18th – RET)
A strong qualifying session left Sutil third on the grid and even though Kimi overtook him on the first lap he looked set for a good one. Until, of course, Trulli tapped the rear of his car spinning him off into the barriers. See below… 7/10 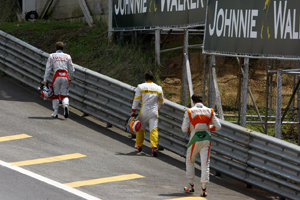 Jarno Trulli (19th – RET)
Trulli was barely alongside Sutil when he tried to go round the outside and yet when they were both taken out, after the Toyota clipped the rear of the Force India, it was Jarno who blamed Adrian. For me it was clearly Trulli’s fault and all he succeeded in doing by flying off the handle afterwards was to look like a petulant child. At the very worst it was a racing accident. Top marks to Sutil for being so mature about it. 0/10