You had to look twice to be certain, but there was no mistaking the boyish grin. Two young female fans had spotted their quarry as he strode towards his motorbike, parked discreetly among the cars on the cluttered infield. He posed happily for photos before blending in to the Saturday evening traffic. Two wheels, plain white helmet: Sebastian Vettel had adopted the old Damon Hill approach to Silverstone commuting… 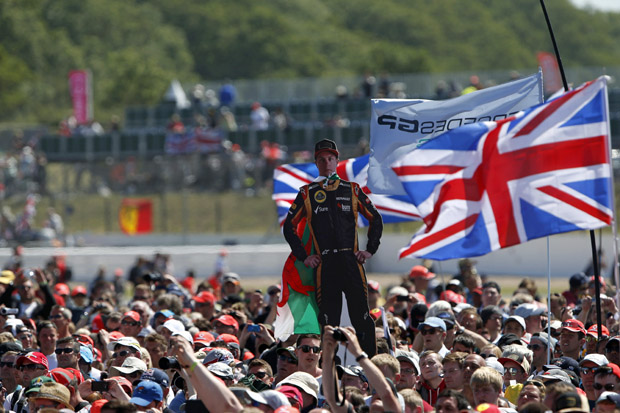 Unlike his suitors, Vettel would come away from the weekend without a prize of any kind. Exploding Pirellis might have captured the headlines, but his was an old-school, mechanical failure: he lost fifth gear and the rest of his transmission internals followed. He was only leading, mind, because Lewis Hamilton was the first of several to suffer a flailing Pirelli.

That prevented the Mercedes driver adding to a string of home victories. Between the end of F1 qualifying and the start of this season’s most contentious Grand Prix, Sam Bird (RUSSIAN Time) and Jon Lancaster (Hilmer) won GP2 races, while Jack Harvey (ART) won the GP3 opener. The Brits were on rather better form than the support race stewards (not the same bunch as their F1 counterparts), who concocted some bizarre decisions. Patrick Kujala was suspended from the second GP3 race, in the wake of a clumsy accident on Saturday, while Carlos Sainz was handed only a grid penalty following a slice of blatant thuggery against Scot Lewis Williamson. In the GP2 sprint, meanwhile, lapped Spaniard Sergio Canamasas delayed the points-chasing Jolyon Palmer before hitting the Englishman halfway through a legitimate – and somewhat overdue – pass. Canamasas was given a drive-through, which made no difference at all (given that he was already at the back) and is unlikely to serve as a future deterrent.

These were but a curious side salad to the main course of shredding Pirellis.

For all its old-tech scaffold grandstands, Silverstone’s F1 audience generates an atmosphere perhaps only Interlagos can match. The crowd’s hopes were deflated when Hamilton’s tyre failed as early as lap eight, the trigger for a splendid fightback, but the passion remained. Vettel was jeered when he pulled off and winner Nico Rosberg received a polite reception, but the loudest cheers were reserved for runner-up Mark Webber, possibly the most British Australian yet conceived. For a time there was a chance that the Red Bull racer might be promoted to first place, after Rosberg was found not to have slowed sufficiently for yellow flags, but that would have been a wholly unsatisfactory conclusion to an already messy afternoon. A reprimand was probably the most appropriate penalty, even though such misdemeanours are usually accompanied by a drive-through, or a 20s time penalty (which, in this case, would have dropped the winner to 11th). 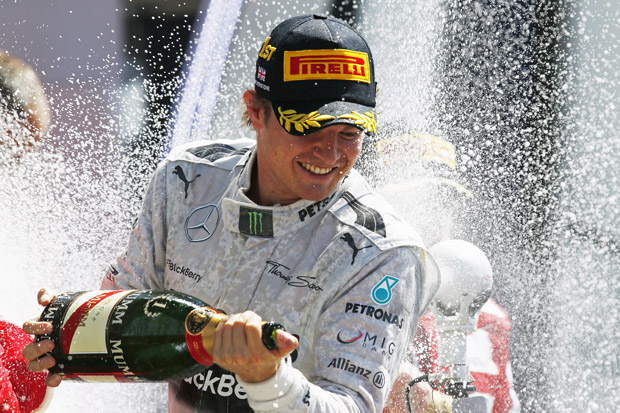 Earlier, Rosberg had almost collided with a couple of journalists as he emerged from the media centre loos following a pre-race pee. Peculiarly, Mercedes sent minders to accompany its drivers on this fortnightly routine – an unnecessary touch, you might think. His biggest potential problem, though, was a delaminating left rear. He sensed it just after passing the pits at the start of lap 42… but the safety car – dispatched so that remnants from Sergio Pérez’s freshly disintegrated Pirelli could be cleared – came to his rescue. He was able to cruise in at reduced speed, change to new hards and resume with his lead intact.

After the podium ceremony, the press posse headed straight to Pirelli, where motorsport director Paul Hembery was scheduled to host a news conference. He spoke only briefly, however. “Today’s problem was different from others we’ve had this year,” he said, “and we’re performing our analysis. We have to go away and understand what happened, but it would be pointless saying any more until we have all the facts.”

With that he was away, and understandably so, but others were more loquacious. 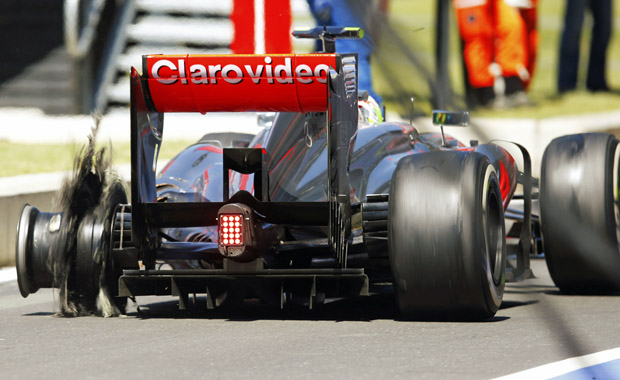 “We asked our drivers to stay off the kerbs as far as the left rear was concerned,” said Red Bull chief technical officer Adrian Newey, “then we raised the rear tyre pressures to shift the contact pressure more towards the centre, because most of the problems seemed to be around the inner shoulder.

“It’s a sad state of affairs. There have been a worrying number of tyre failures during the year. Pirelli appeared to come up with a solution for Montréal, but three teams vetoed that because they were worried it might suit some more than others. As a consequence of that short-sightedness we ended up with F1 putting on today’s worrying performance. After this, I’d be very disappointed if no action was taken. I don’t think teams should be involved in such a vote, though, because you’ll never get them all to agree.”

He revealed that Red Bull had been on the cusp of a possible tyre failure, too, for cuts were found in Vettel’s left-rear carcass after his opening stint.

“There are two issues,” he added. “One is the car that has the failure, but you also have 3kg or so of tread flying around. If that hits the following driver on the helmet, it doesn’t bear thinking about.”

Red Bull team principal Christian Horner added. “The first thing we consider is the safety of our drivers, so we needed to understand what was happening: was it a kerb, was it debris, was it something else? We told them to drive relatively conservatively, but it seemed pretty random because the failures happened to different compounds.

“The most logical thing would be go back to the tyres that previously served Pirelli so well. The problem there is that teams are always perceived to be chasing a competitive advantage, but we’ve won races on these tyres and I’d urge Pirelli to change purely on the grounds of safety. That comes above any performance criterion.”

After his unpleasant accident during qualifying for the 2009 Hungarian GP, when a piece of debris struck him on the helmet and left him nursing a serious head injury, Felipe Massa has a better appreciation than most of the sport’s potential perils. “What happened today,” he said, “was unacceptable. It’s not a matter of the soft tyre being better for one team and the hard for another, it’s about safety. Today was very dangerous for all 22 of us. People say it’s because of the kerbs, or debris, but it’s not the first circuit at which this has happened. Something has to be done for safety’s sake.”

Or, as team-mate Fernando Alonso put it: “It’s hard to believe these kerbs were the problem, because I’ve raced here with them for 12 years.”

Sunday will be remembered as a day on which the German national anthem rang out as expected, but not quite in the manner foreseen.