There is something reassuring about the sight of human litter gravitating towards bacon bap merchants at 6.15am – a fragment of landscape that’s very Silverstone. The catering areas are a little more organised than once they were, however. Laps of the track’s perimeter used to be an adventure at Grand Prix time, with a ramshackle collection of huts and stalls selling everything from stickers to overpriced ice creams via VHS tapes. You were never sure quite what you might find, but the individual long since surrendered to the homogenised. Even burger stalls now look mostly the same. 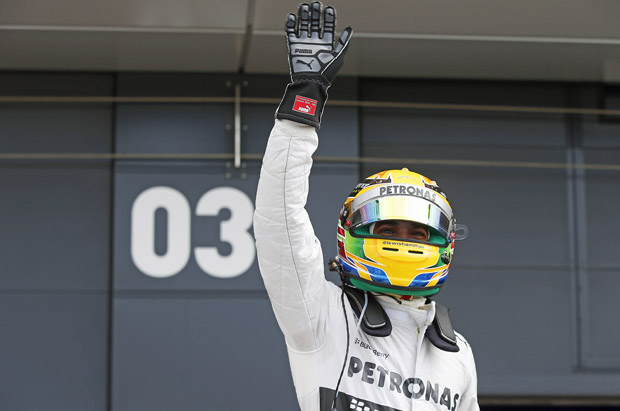 There will be a similarly uniform appearance at the front of the grid tomorrow, with Mercedes-Benz and Red Bull occupying the first and second rows respectively. Lewis Hamilton annexed pole for the second time at his home race, but this was done on merit with a stellar lap 0.352sec quicker than team-mate Nico Rosberg’s best. He last took a Silverstone pole back in 2007, but that was a trompe l’oeil occasioned by a deceptively light fuel load at a time when such variables remained influential.

The Englishman had been unhappy with his car’s balance during free practice, but some late set-up tweaks rescued his afternoon. “The car was great,” he said. “It has been hard fine-tuning it to feel comfortable, but the changes we made before qualifying helped. It’s still not perfect, though. Tomorrow is another matter and our Sunday performances are not quite as strong right now, so it’s going to be tough to keep Seb [Vettel] behind, but we’ll give it everything we’ve got. For the first time since 2008, I feel I have a car that allows me to compete here at Silverstone.”

Rosberg admitted he could do little about his sidekick’s pace. “It’s usually a close battle between us,” he said, “but it wasn’t today. That was a great lap by Lewis.”

Hamilton’s former team-mate Jenson Button was only 11th – but happy that McLaren is moving in the right direction. “Our car isn’t quick,” he said, “but it’s better than expected. I was happier during qualifying that I’d previously been this weekend and it was probably best not to make it into Q3. That would have left me 10th, so at least I’ll now be starting on the cleaner side of the track.” 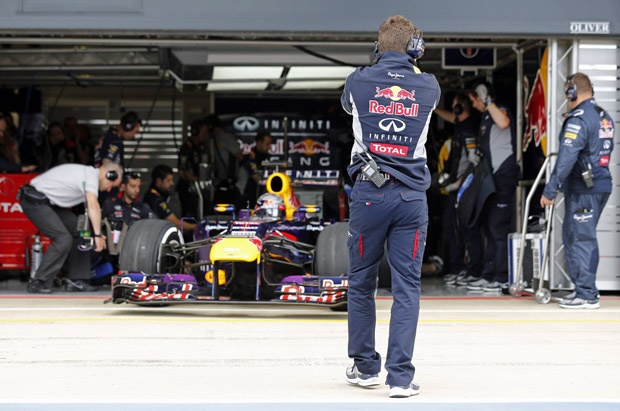 Although the Mercedes drivers had a couple of tenths in hand, championship leader Vettel remains favourite to give Red Bull a second straight Silverstone victory. “We’re not giving anything away to the Mercedes guys on purpose,” he said, “but they’re bloody quick on Saturday afternoons. I think third was our maximum today, but who knows what will happen tomorrow? We’re getting better, but so are they.” He qualified just 0.009sec ahead of team-mate Mark Webber, who is chasing a third British GP win after his successes in 2010 and 2012.

Paul di Resta was due to start fifth in Force India’s home race – and promptly dug into his book of 1970s football clichés: he was “over the moon”, apparently. His car was later found to be slightly underweight, however, a matter that has been referred to the stewards at the time of writing. If confirmed, the Scot is likely to be drummed to the back of the grid.

Daniel Ricciardo was an impressive sixth for Toro Rosso: the Australian has been confirmed as a possible candidate for the Red Bull seat Webber will vacate at the season’s end and underlined his credentials with a strong run. Team-mate Jean-Eric Vergne – one of his rivals for the job, alongside Kimi Räikkönen – was back in 13th.

Adrian Sutil (Force India) lines up seventh, ahead of Lotus duo Romain Grosjean and Räikkönen, with Fernando Alonso 10th. Pirelli has brought hard and medium compounds to Silverstone – and they tend to works less effectively on the Lotus and Ferrari chassis, which are traditionally gentler on tyres than their closest rivals. That said, the same rubber was used during the Spanish GP: like Silverstone, Barcelona is a track that favours aerodynamic efficiency and on that occasion Alonso qualified third. 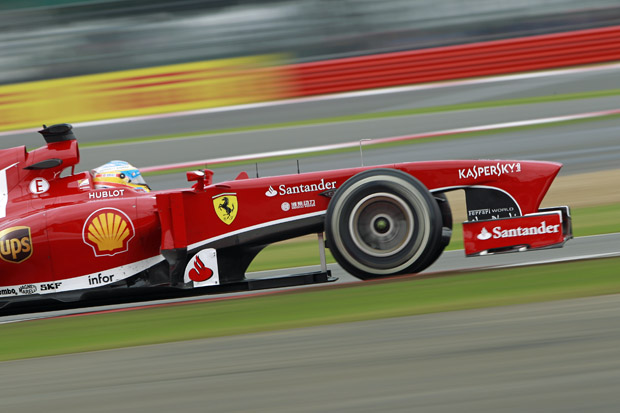 “Perhaps our new parts are not working as well as we’d expected,” the Spaniard said. “A few weeks ago, when we were a couple of tenths away from our rivals, it would have been hard to imagine that we’d now be a full second adrift. The car was good at the start of the year, but now we’re fighting just to make Q3. Things seem to be getting worse and worse.”