With the rain arriving ahead of the start, the various troubles for multiple drivers before even arriving at the grid, the drama at the start that never really ended until the chequered flag, one or two things might have passed you by during Sunday’s race.

The 2021 Emilia Romagna Grand Prix had a lot to live up to expectation-wise following the curtain-raiser in Bahrain, but boy did it deliver in spades as Max Verstappen struck back at Lewis Hamilton to claim his first win of the season.

Lando Norris rebounded from his deleted qualifying time to make it onto the podium with a brilliant drive for third, on what was a big day for his F1 career and his prospects against his highly-rated new team-mate, Daniel Ricciardo.

Here are a few of the things you might have missed during a frenetic Emilia Romagna Grand Prix. 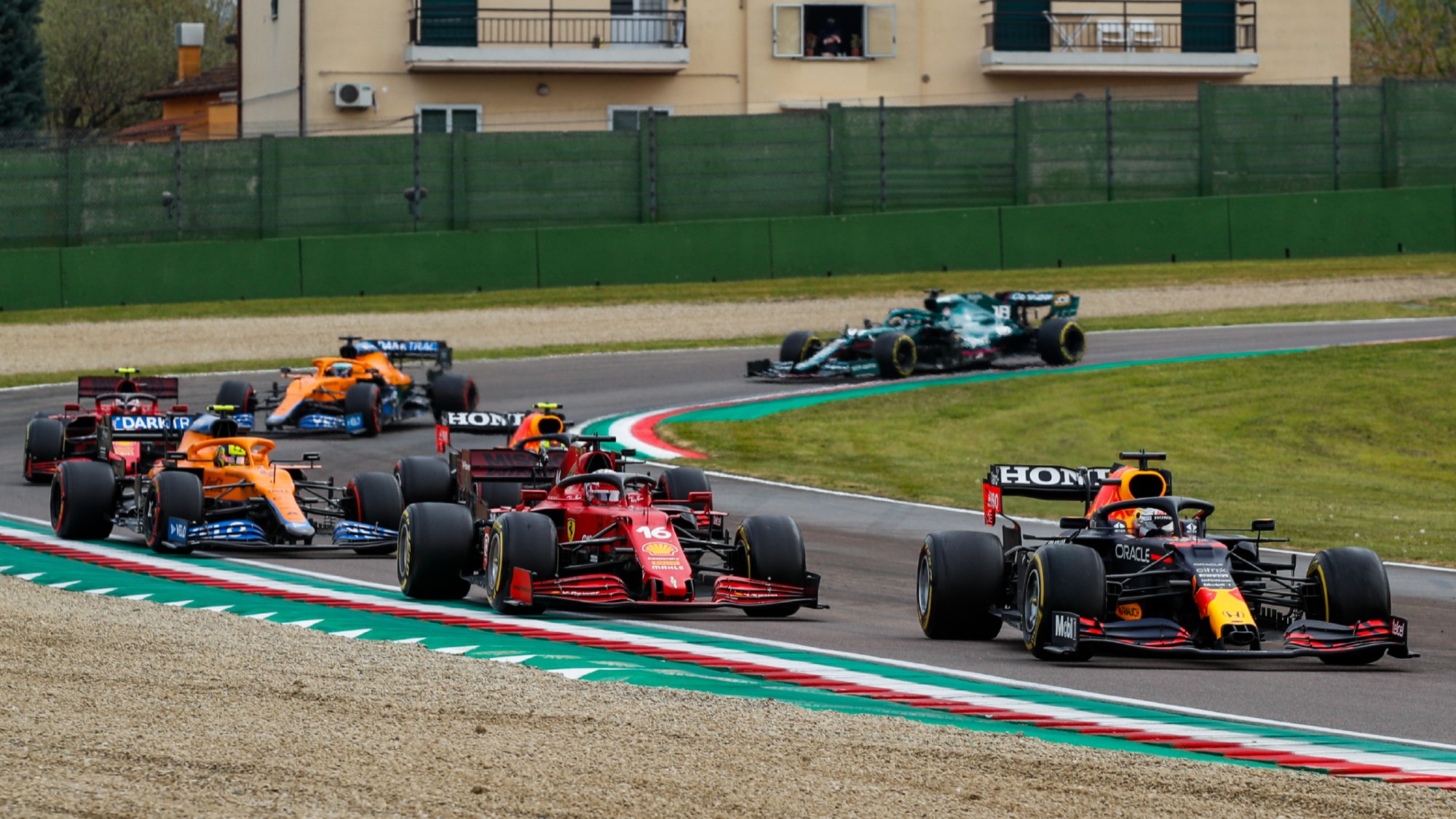 Leclerc could have overtaken Verstappen at the safety car restart

The Ferrari driver was very kind when race leader Verstappen got out of shape entering the first Rivazza corner about to launch into his race restart.

Charles Leclerc displayed incredible restraint in not overtaking the Red Bull, but should he have taken the opportunity? Earlier in the race when Sergio Perez went off the road at Piratella under the safety car, Ricciardo and Pierre Gasly were lightning fast to make sure the Mexican paid for his error.

Gasly even had to take action to avoid hitting Ricciardo ahead such was his speed to beat the Red Bull driver for position as the Mexican made it back onto track.

Leclerc’s situation was slightly more difficult though with his team radio going haywire for the remaining laps post-red flag. His distressed message about an earpiece while sat in the pitlane prior to the restart was never sorted, and the Monegasque driver finished the race without being able to hear his team.

Even while driving behind Verstappen on the out-lap, Leclerc had no idea the restart would be a rolling one, only the notion that it could be a possibility having been informed while out of the car in the pitlane. Had his engineer been quick enough over a functioning radio, Ferrari might have had a car leading the restart at Imola, a sight the Tifosi would have loved to see.

Verstappen’s prime slot on the grid 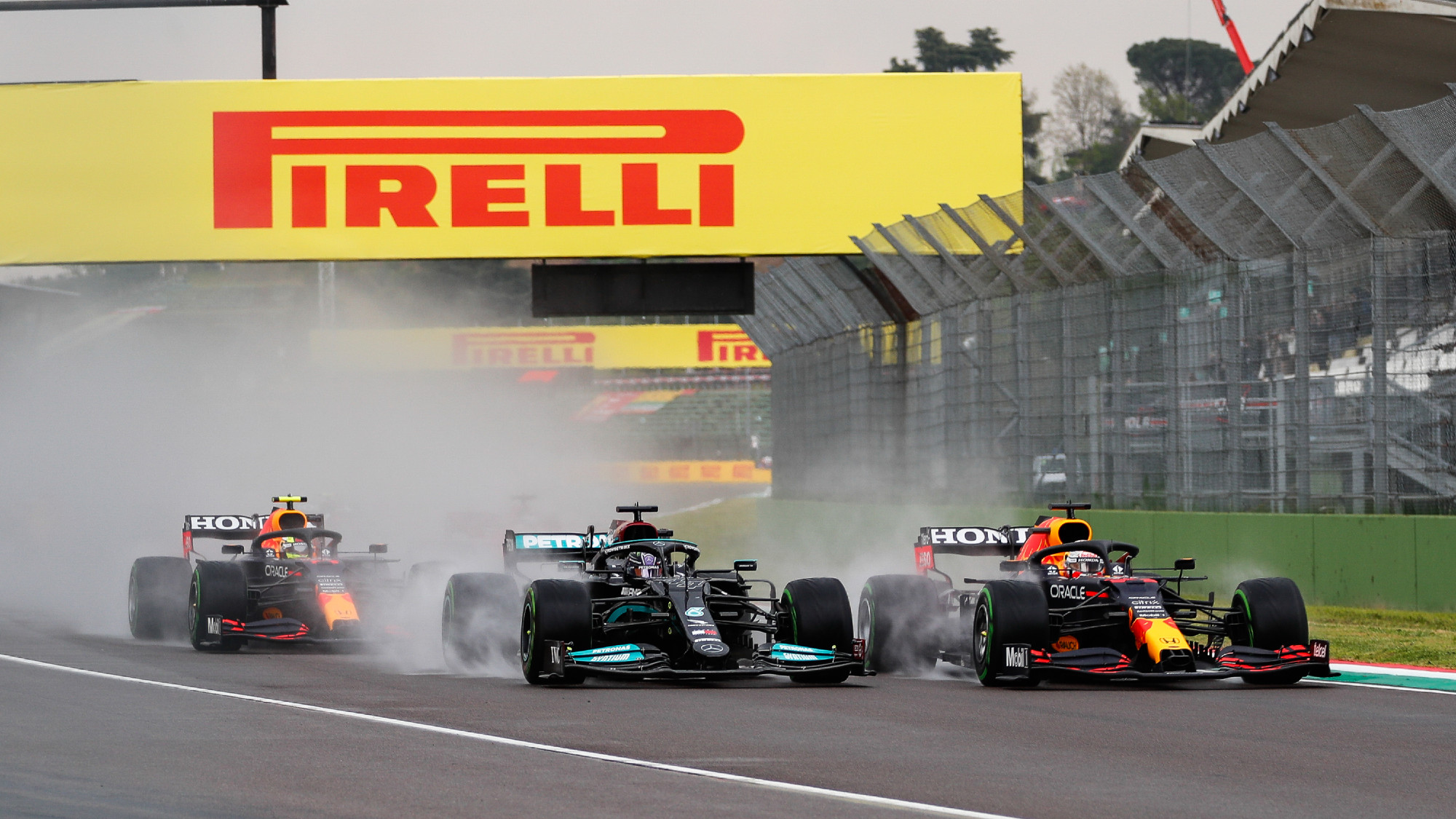 Verstappen got the perfect getaway to set up his Imola victory

The gazebos made an appearance on the grid ahead of lights out as mechanics worked to keep the grid slots as dry as possible, and it worked out perfectly for Verstappen.

His third-place slot was one of the drier-looking on the start/finish straight and as it turned out, probably the best one to be in at the sharp end of the grid.

As pole-sitter Hamilton and team-mate Perez launched off the front row and into the unknown, Verstappen’s second-gear launch was good but what tipped the scales in his favour was running into another dry slot ahead that the Mercedes had left behind.

It was the second phase of the start where the Red Bull made up the distance and with a gap just about wide enough for an RB16B, Verstappen was quickly alongside and nosing in front of his championship rival into the first chicane.

From that point on it was his race to lose and, barring a small snap and sideways moment at the race restart, he kept out of trouble and collected a valuable 25 points on a difficult day.

With just a single point in the standings between Hamilton and Verstappen, the smallest of things can make the difference and an extra few metres of dry track did in this case. 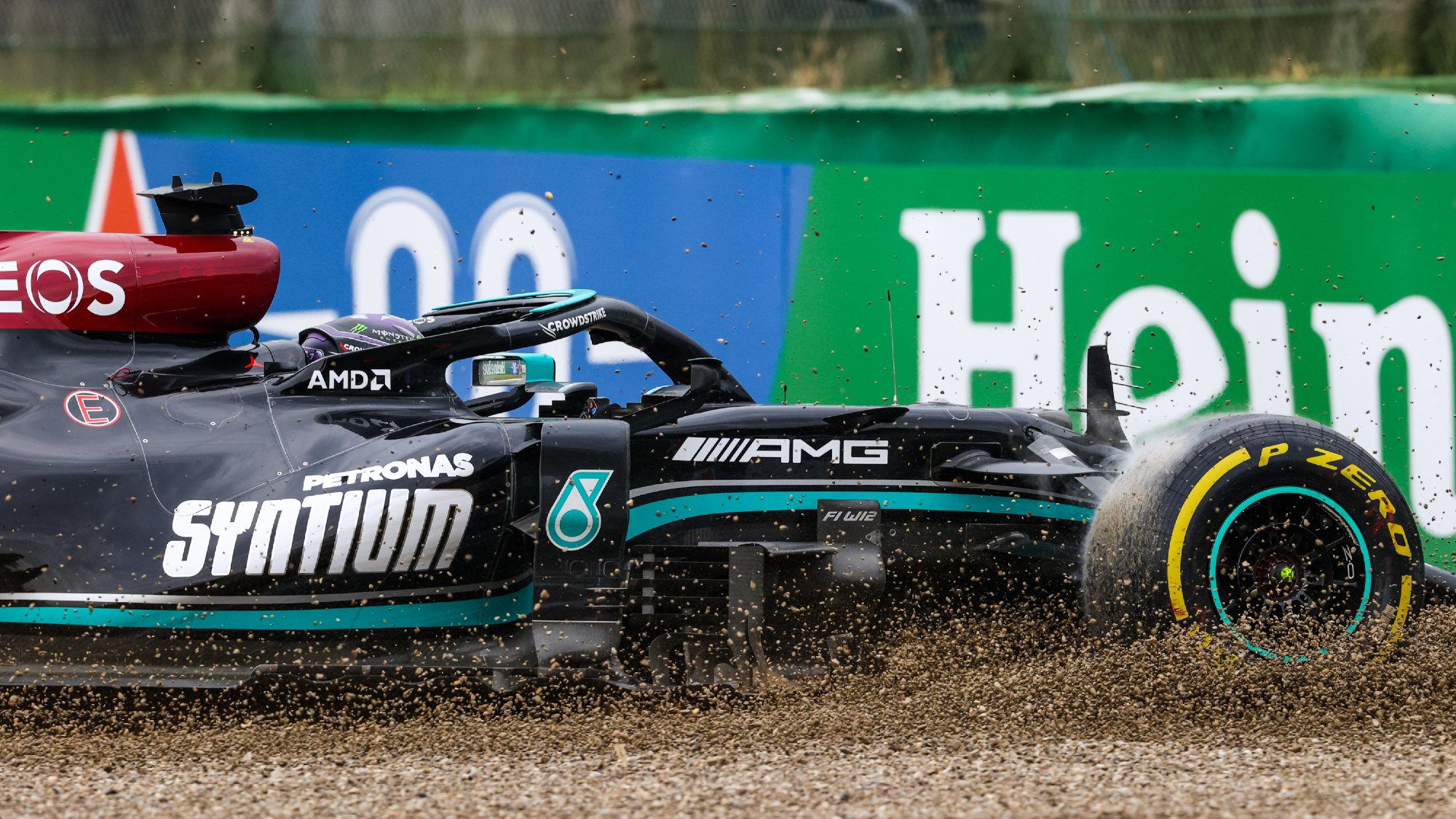 Hamilton’s trip through the gravel almost spelt game over, but he smartly selected reverse over first

With his front wing hanging off the car, limited space available to manoeuvre in and rear tyres perilously in the gravel trap, Lewis Hamilton flicked down the gears and, eventually, found reverse gear.

His quick thinking saved his race and eventually his title lead after a brilliant comeback drive helped along by a healthy slice of luck. Ultimately it was his decision to back out of the Tosa gravel rather than panic and dig himself into an even greater hole that put him on the path to second. And it was all within the rules. 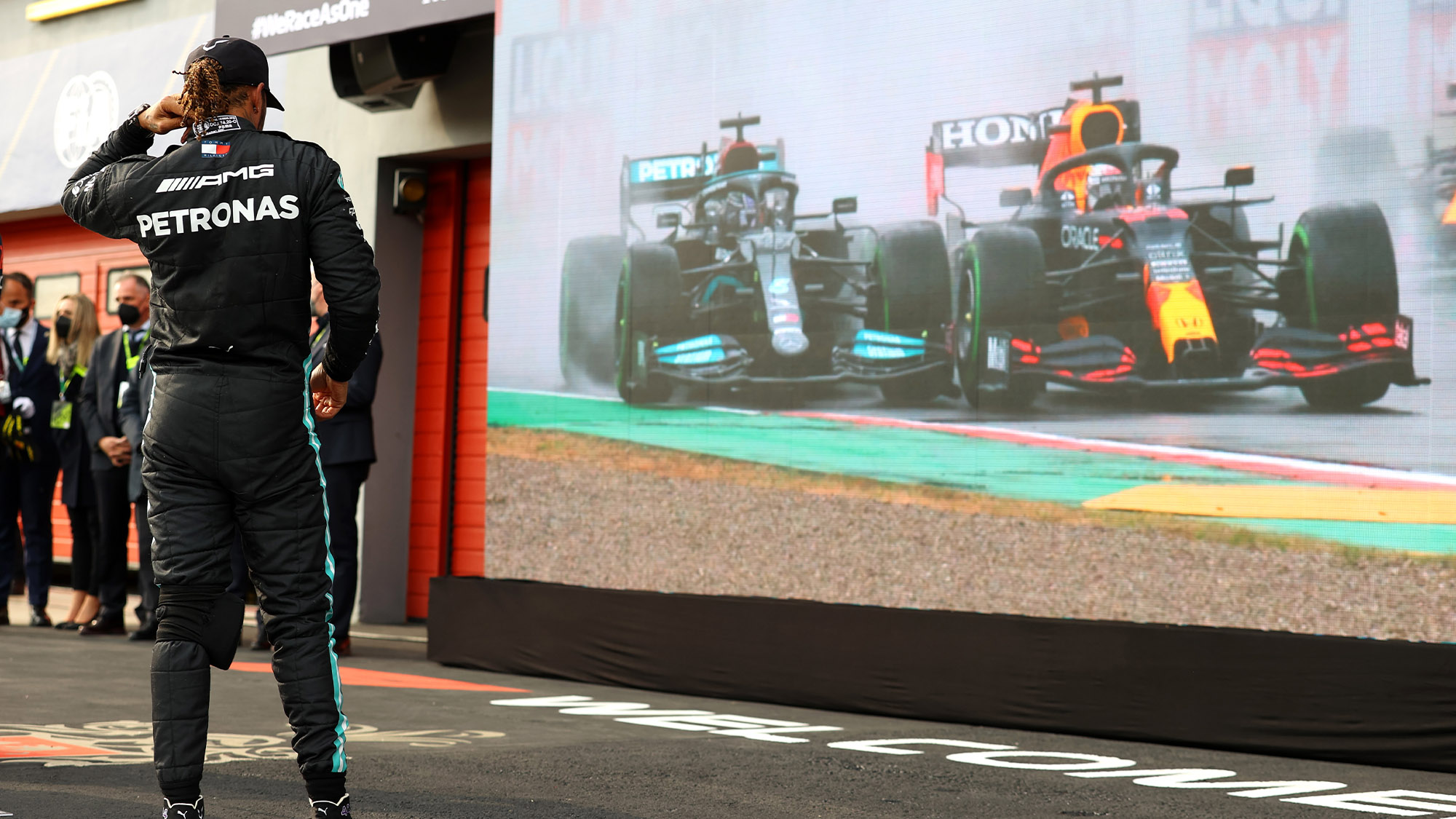 Why Hamilton was hampered and Bottas so slow at Imola

Max Verstappen stamped his authority on this race right from the start despite qualifying his Red Bull only third. Lewis Hamilton, having qualified his Mercedes on pole, became the chaser…

Reversing back onto a live track under yellow flags is within the confines of the regulations though had he done so in the pitlane it would have been another story.

Under the sporting regulations section 27, articles 27.3 and 27.4 cover this off with the following:

27.3: “Should a car leave the track the driver may re-join, however, this may only be done when it is safe to do so and without gaining any lasting advantage.”

27.4: “At no time may a car be driven unnecessarily slowly, erratically or in a manner which could be deemed potentially dangerous to other drivers or any other person.”

Section 28 confirms that such an action in the pitlane would contravene the regulations: 28.3 “At no time may a car be reversed in the pit lane under its own power.”

There is no specific rule that prevents reversing back onto the track safely and with yellows waving, Hamilton’s reversing away from the racing line was legal and a clever move too.

Tsunoda could have been key for Red Bull 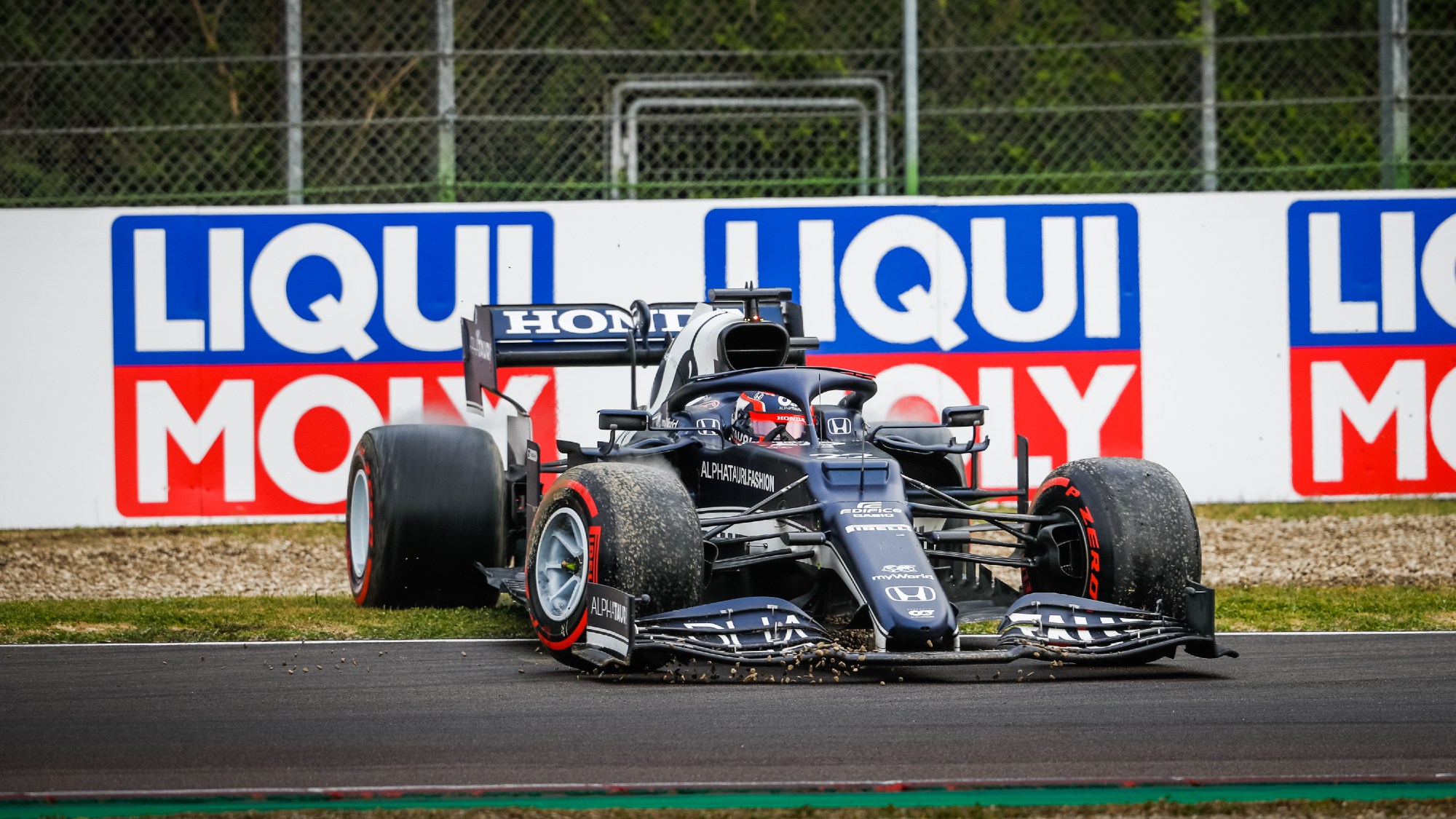 Yuki Tsunoda had an eventful weekend in Imola

At the race restart, Hamilton was down in eighth and Verstappen was leading, things were looking perfect for the Dutchman. By the chequered flag, he’d lost the fastest lap to his rival and found that black Mercedes pulled up alongside him in parc ferme in front of the board with the number two on it. Quite a surprise considering it was nosed into the barriers not long before.

But the title race might have taken another twist in his favour had Yuki Tsunoda kept his AlphaTauri on the track at Turn Two. The Japanese driver actually demoted Hamilton to ninth entering the Tamburello chicane on the restart but, having crept onto the wet part of the track to take the place, he was too eager on the throttle with damp tyres and flung himself off into the gravel.

Had the AlphaTauri have held position, it could have tipped the scales in Verstappen’s favour in the championship. While Hamilton was eventually able to clear all those in between himself and the race winner, an extra Honda-powered car would have cost vital time and crucially, tyre life.

He made it by Norris on lap 60 of 63 but it took several laps behind each driver ahead to clear them. A Tsunoda-shaped blockade likely would have capped Hamilton’s comeback with a best-possible result of third, handing the championship lead to Verstappen.

Ultimately the game of ifs and buts means nothing and the end result means that the 2021 championship is separated by a knife-edge heading into the Portuguese Grand Prix.