Ettore Arco Isidoro Bugatti was an aesthete from an artistic family. His paternal grandfather was an architect; his father designed avant-garde Art Nouveau furniture, jewellery and musical instruments; and his younger brother, tellingly christened Rembrandt, was a sculptor. 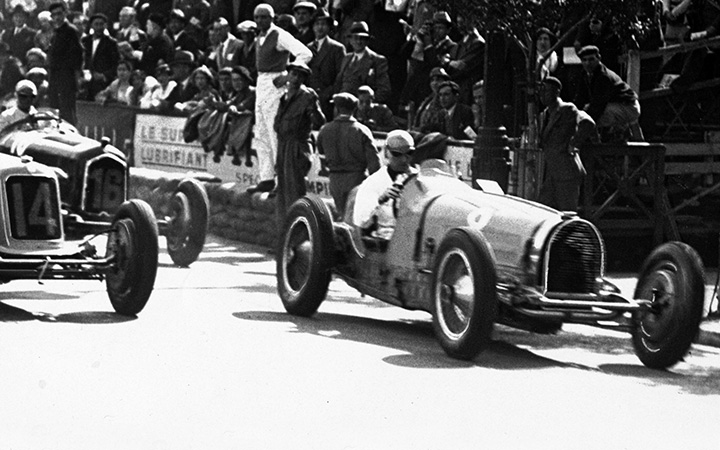 Form follows function in motor sport. Except for Ettore, a man without formal engineering training, they ran at the very least in parallel.

By 1933, tiring of racing’s demands and hopeful that his prodigious 23-year-old son Jean would soon be at the helm, he unveiled his final Grand Prix challenger.

The project had run very late – those magnificent, streamlined (122mph in 1934!) rail-cars had left Ettore short of spare logistical, mental and material capacity – and its end product was distinctly behind the times. 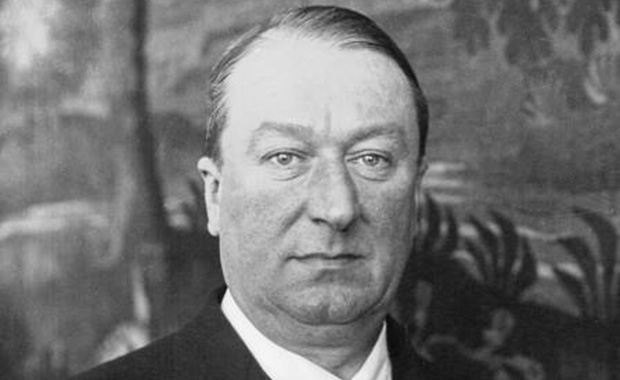 But it was beautiful, by God!

From its trademark horseshoe radiator – Ettore was a noted equestrian – to the riveted spine of its shapely tail, via those sumptuously swaged, beam-in-bend side rails, it was a visual symphony on piano wire wheels.

Those glorious rows of spokes supported only radial loads while providing a 10lb saving over Bugatti’s previous, similarly outlandish and striking, broad-spoke alloys; all torques instead were to be absorbed by interlocking serrations on rim and drum. The tubular front axle in turn was halved and threaded so that some small degree of independent rotation around a tapered inner ‘slug’ was possible.

A masterwork of the machinist’s craft. 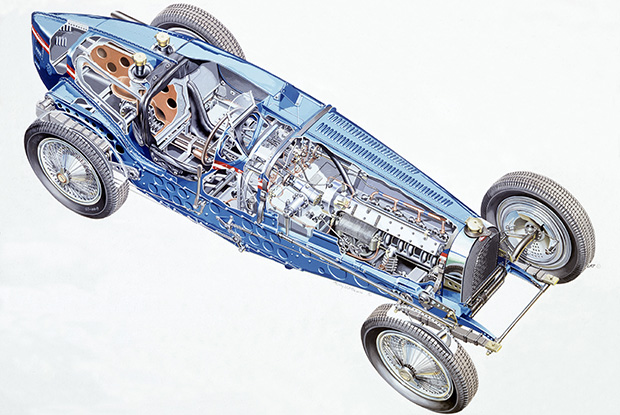 Ettore appeared content at the car’s rollout at his Molsheim HQ. Driver Achille Varzi, however, stared impassively down the lens. This was the icy Italian’s default, of course, but it’s not hard to imagine him ruminating darkly on the relative lack of streamlining, cable-operated brakes, exterior gear lever (operating a separate four-speed ’box), solid axles and friction dampers.

Impending word of state-sponsored, paradigm-shifting, hi-tech German contenders was already swirling around the paddocks, but Ettore had mulishly trod his well-worn path. An Italian-born pillar of the French establishment, who lived in the Franco-German bone of contention that was Alsace, and who would insouciantly marry bowler hat with plus-twos, he built exquisitely quirky cars that were successful, desirable and greater than the sum of their parts.

Their days of winning hundreds upon hundreds of events each season, however, were over. 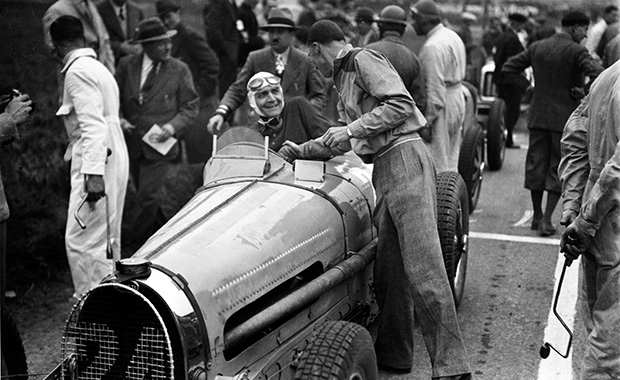 Robert Benoist on the grid before the 1935 Picardie Grand Prix

Type 59 would be the last purpose-built GP racer of note to feature the classic two-seater stance. Two years since Vittorio Jano’s Alfa Romeo Tipo B had proved comprehensively the benefits of the monoposto arrangement, Bugatti preferred still to site his driver low, alongside the drivetrain rather than above it. He emphasised this slinky MO with a shallow dry sump (beneath that Art Deco twin-cam straight-eight) and underslung rear axle with double-reduction final drive.

The eyes had it – but the naysayers won the day. Stubbornness had overtaken his genius.

Type 59 disappointed on its debut. Varzi finished fourth at the Spanish GP, the final major race of the season, and would never drive the car again. He signed with Alfa for 1934, the first year of the new 750kg Formula.

Despite careful drilling of its chassis rails, the Bugatti only just scraped under that limit – and then only if its magneto was illegally removed prior to scrutineering. And despite a mid-season increase of 500cc, to 3.3-litres, it remained underpowered and overwhelmed. 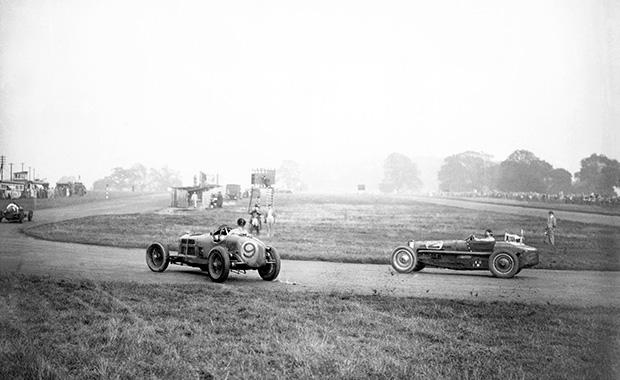 But in late July, at Spa 80 years ago – and therein lies this article’s tenuous link – it copped a break when Mercedes-Benz and Auto Union made a last-minute decision to stay away after local customs officials had threatened to levy a hefty duty on their drums of alcohol-based fuels.

Tazio Nuvolari stayed away, too, rather than drive his disappointing semi-works Type 59.

And the Scuderia Ferrari-run Alfa Romeos of Louis Chiron and Varzi hit trouble while holding a commanding lead. The Monégasque made a rare mistake and rolled at Eau Rouge, then a much slower corner than it is today, and Varzi retired a few laps later because of an engine problem.

All of the above allowed the Type 59s of Niçois René Dreyfus and team newcomer, Milanese aristo Antonio Brivio, both of whom had been delayed by early pitstops for new spark plugs, to finish 1-2. 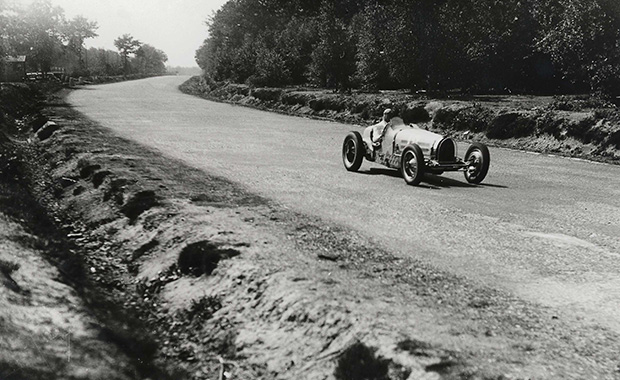 Thereafter this rakish machine’s greatest service was to prove how good Jean-Pierre Wimille was and indicate how good he would become. It also cheesed off rival French manufacturers with its adoption of skimpy wings and headlights to hoover the crumbs of comfort provided by a creaking nation’s insistence that its races be held for sturdy sports cars and not Germany’s GP supremacists.

Still in its GP guise, Wimille used it to score minor victories at Algiers (1934) and Deauville (1936), and dice regularly with Alfas and Maseratis, and very occasionally with the Silver Arrows: he came close to denying Mercedes-Benz a 1-2-3 in San Sebastian in 1935, having briefly got among them at the same track the previous year. He also finished second in Tunis in 1935 – behind Varzi’s distant Auto Union – and, with the Type 59 by now in its 4.7-litre form, at Long Island’s pecunious Vanderbilt Cup of the following year. 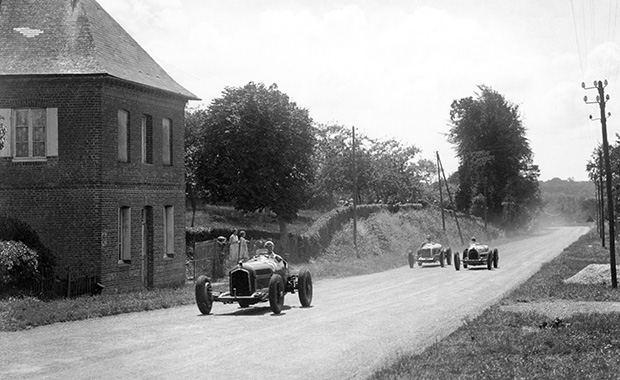 Winning had by then become a function of science, with very little room for those who let their art rule their head.

When Adrian Newey departs GP racing at this season’s end, and takes his pens, pencils and French curves with him, there will be no room whatsoever for those with any such thoughts.

Type 59 was the last GP car to achieve perfection while underachieving on the track. Its built-in obsolescence has long since faded, while its luminescent allure shimmers undimmed.

It’s as close to the spirit of a van Gogh that motor racing is ever likely to get. It must be cherished for that reason.