How cheaply can you watch F1 cars in action? And is it better value than going to a Grand Prix? Ed Foster and Jack Phillips headed to Barcelona to find out. 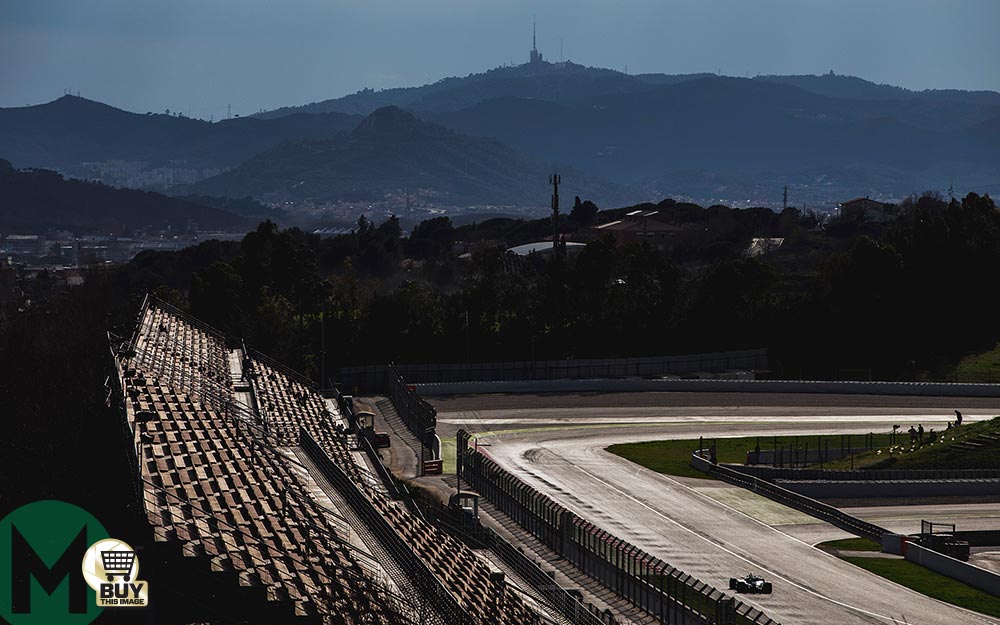 There are lessons to be learned here: book early and don’t be an idiot. We failed spectacularly on both fronts.

First case in point, the hire car. We were lured in by the 20 euro cost online and realisation that we had made a huge mistake only set in when we arrived at Goldcar. After an hour of hanging around in a queue that wasn’t moving we were informed that there was a 55 euro charge for fuel upfront and a 19 euro administration charge. Oh, and if we didn’t want to have 1200 euros blocked on our cards, we’d need to pay 56 euros for full insurance. Our 20 euro hire car cost suddenly looked like 115. It was an inauspicious start to proceedings.

Our easyJet flights came in at £138.75 each, which is a wonderful display of last-minute planning. I heard some had managed to get to Barcelona for less than £50 per person.

Once hiregate and the flight cost are reduced, however, you’re still looking at £120 or so to watch Formula 1 cars in action. Is it worth it? 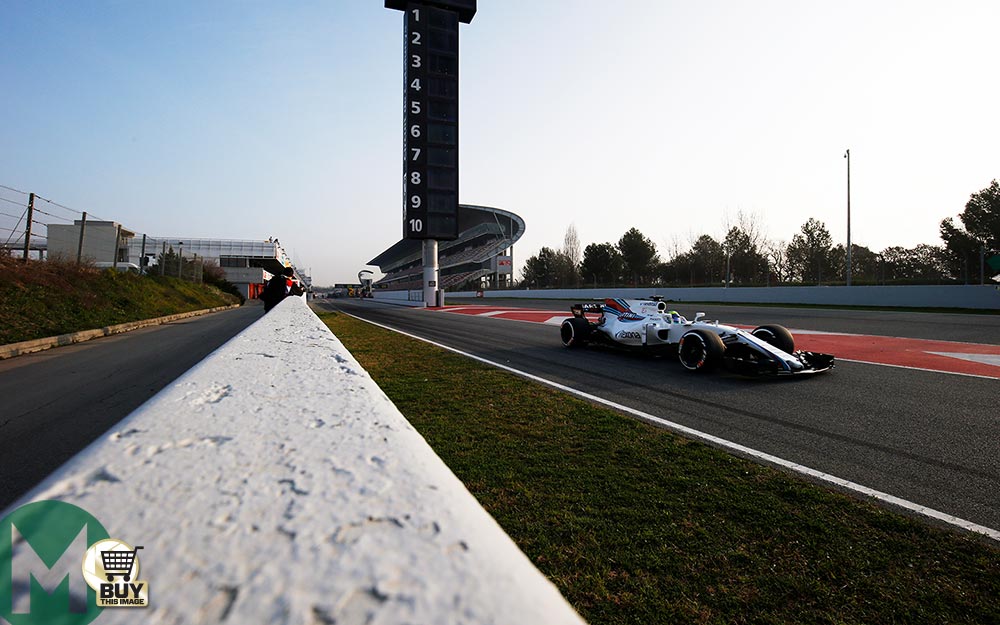 Yes, it was good to see the 2017 cars, which look great on track. More noise would be good, but here’s not the place for that debate. However, is it better value for money than other options such as a Grand Prix, the Goodwood Festival of Speed or Red Bull live demonstrations?

Let’s ignore the latter two as it’s rare to see the latest-specification cars and focus on a Grand Prix. Let’s also set aside the cost of hotels, hire cars, food etc. as the big difference is this: £15.34 to watch a test or £160 for a grandstand ticket on race day at the Italian Grand Prix. You can do it in a day (just) so let’s also ignore the cost of hotels. Interestingly, we did initially book a non-refundable hotel near Barcelona only to find out we’d booked it for the wrong week.

Bottas is still fastest, but Vettel has moved the Ferrari to within a couple of tenths – on harder tyres… #f1 #motorsporttoday

The £140-plus difference between a test and a race may seem a lot, but I promise you it is worth it. Testing is, well, testing. You can keep up to date via various live text streams/social media, but ultimately you’re watching cars pound round a track for reasons only the teams know about. There’s no sense of occasion and that’s what motor racing is all about – the drama of the race, the battles through the field. Yes, yes… some F1 races are processional, but the Italian Grand Prix at Monza for only £140 more? Exactly.

Other things that are worth bearing in mind at a test include watching an empty track for periods of time and then at others, only one team doing laps. On a race weekend you could of course go and see the shops or eat at the numerous food outlets during the breaks. During testing, not so much. There were one or two places to get food at Barcelona, but it was a case of ‘eat to satisfy, not to enjoy’. That said, watching Jack trying to order a burger in Spanish and receiving a bacon and cheese wrap was a particular highlight. Imagine what he’d end up eating if he was trying to speak Italian in, say, Monza on September 3? 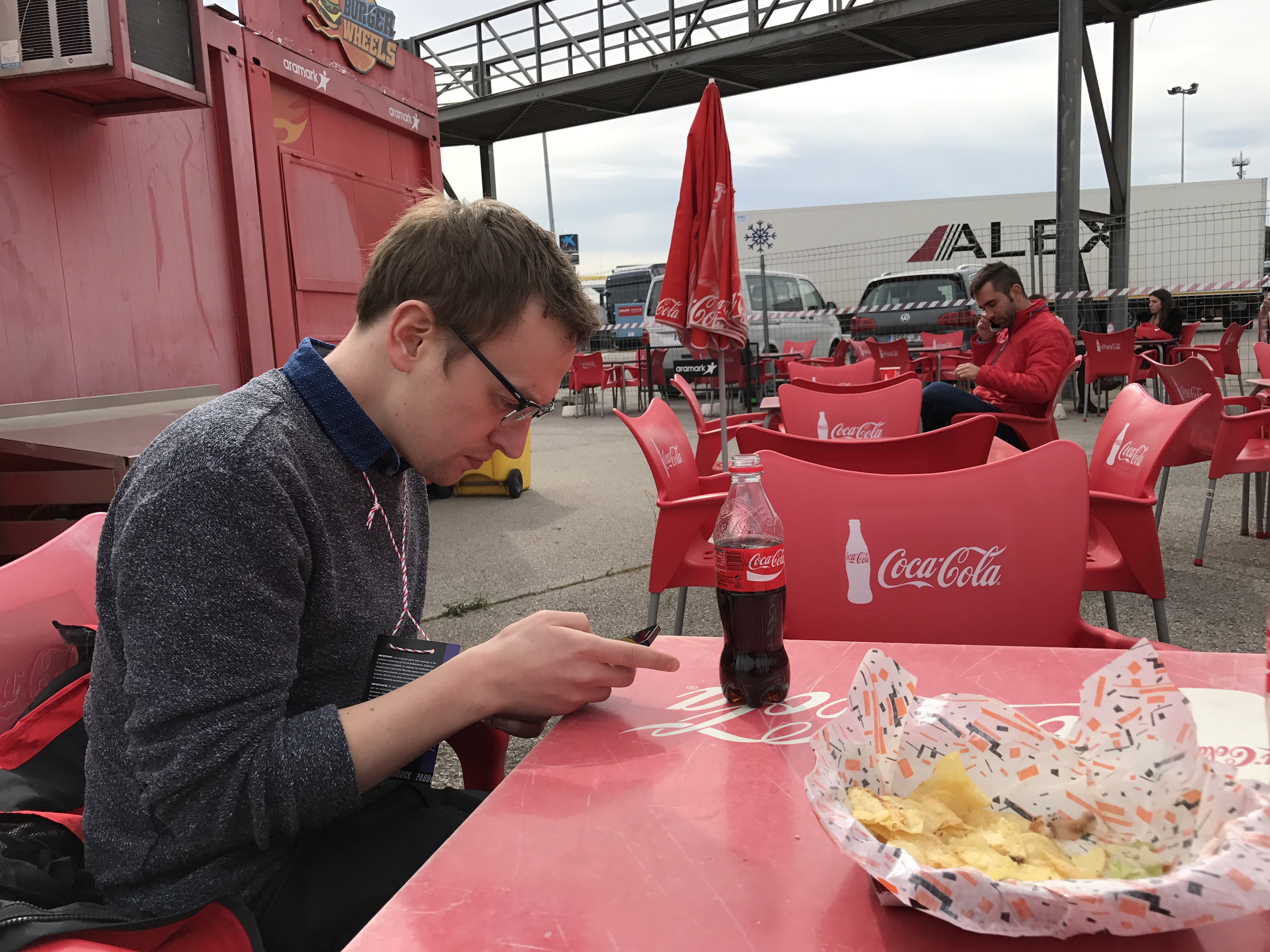 Testing, it should be made plain first up, is not often considered a spectator sport. The idea of watching usually solitary cars pounding around a circuit on a weekday is a tough sell.

But with Formula 1 being increasingly unobtainable for the average punter it’s a viable way to watch the best cars in the world at full tilt in the flesh, not behind a an expensive TV subscription.

Formula 1 is not the BTCC, the racing not the harem-scarum overtakes-every-turn kind, so the fact that they’re not racing is almost immaterial. Watching a four-time world champion at close quarters, throwing a high-downforce, now more powerful and faster F1 car around Catalunya is still an experience. The morning’s Uber driver pinning a move down the inside of a fellow cabbie at 4am wasn’t the day’s most exciting driving, after all, as I thought it might have been at the time.

Grands Prix are locked down. Ticket-holders are restricted to their zones and little else. Without a grandstand ticket the experience is limited at somewhere like Silverstone, as high advertising boardings restrict viewing – the viewers at home seeing a sponsor banner deemed more important than a paying spectator seeing what they paid hundreds of pounds to see. But at the test it’s unlimited grandstand access – to the ones open – and it’s a mere 18 euros to get in.

If you were to buy the full access ticket you get a tour of the paddock, too. As journalists it’s easy to overlook the appeal. But for fans it’s a unique experience to be wandering among the vast trucks as Daniil Kvyat nips across in front. That those tickets are sold out for both tests prove their worth, and at 50 euros (including admission) it’s not obscene.

At a Grand Prix you’ll watch one corner, and that will be your experience. But with it being a full day of testing you get the chance to enjoy the circuit, and Catalunya is a circuit to be enjoyed – not least for the permanent smell of cocoa wafting across it. It’s no Tilke-drome, fans can get close. Certainly closer than Silverstone, where you’re in one postcode and the driver on the apex is in another. It has a rustic charm, a stunning backdrop and is undulating like all race circuits should.

With cars running various programmes at various points, during the day you can see who is best where – the Red Bull steaming into turn one, the Ferrari firing stunningly through Campsa and the Mercedes on rails seemingly all around. At a Grand Prix you’ll notice x is best at y, and relying on TV screens for the rest.

And with Liberty seemingly pushing F1 into the digital age, the teams are finally able to experiment and utilise the digital media experts they are forced to underuse on weekends. So you might bump into Max Verstappen, sat in the grandstand, with a team shirt (Steve, in this case) and camera in his face.

Not in the car? Time to see the fans!  @Max33Verstappen makes an impromptu visit to the Turn 10 grandstand. #F1Testing #Red13ull pic.twitter.com/GVdWCOpOI2