Charles Leclerc has said that he would be happy to keep Sebastian Vettel as a team-mate next year because their relationship has always been good, even during last year’s on-track clashes.

In a relaxed interview from his Monaco home, the Ferrari driver said that he had never fallen out with Vettel, who is out of contract at the end of the year, and that he was looking forward to competing with his team-mate in virtual races.

Leclerc also suggested that a shortened 2020 season could result in a surprise champion because drivers will be taking more risks, knowing there are fewer chances to score points.

From the first race in Australia last year, when Ferrari imposed team orders to prevent Leclerc from challenging Vettel, the young pretender increasingly rattled the cage of his more experienced, world champion team-mate. It appeared as if he and Vettel were the best of enemies inside Ferrari.

Most public was the flouting of team orders in Sochi, and wheel banging at the Brazilian Grand Prix. The resulting punctures sent both out of the race, yet the damage done to their relationship seemed far more costly than that to their SF90s.

However, Leclerc says that the relationship between the drivers didn’t sour, despite their wounded egos. 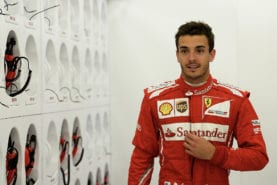 Jules Bianchi deserved Ferrari drive more than me, says Leclerc — and he'd have been faster

"There was lots more to come" from Jules Bianchi, says Charles Leclerc of his close friend, mentor and godfather

“It was good, even though we had a few problems on track, like in Brazil, or things like this,” said the 22-year-old Monégasque.

“I’m very happy with Seb. It has always been a good relationship, even though from the outside it was probably not seen as such. But it’s always been good between us.”

The current racing hiatus has meant that we have been waiting to see whether the drivers can maintain a more civilised union this year, in particular, should Vettel’s contract be extended.

Vettel revealed last week there was a possibility, with talks commencing over a new deal, he could sign prior to the first race of whenever the new season starts. On the other hand, there has since been speculation he has only been offered a one-year contract on significantly reduced terms.

Whatever the outcome, Leclerc insists he would have no qualms with Vettel continuing as his team-mate.

“I will welcome anybody but if Seb stays I will definitely be happy.”

Without any on-track racing at present, Leclerc is first eager to clash with Vettel again in the virtual world.

After turning to sim racing during the lockdown period, Leclerc has proven a dab hand, winning both Virtual F1 Grands Prix around Melbourne’s Albert Park and the Shanghai International Circuit, beating the likes of Red Bull’s Alex Albon and Williams pair George Russell and Nicolas Latifi.

He and other drivers also organised a charity esports series that raised funds for COVID-19 relief efforts. 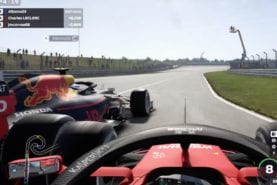 Formula 1’s Virtual Grand Prix series has been fairly chaotic for the most part, but race four was a much cleaner, closely-fought affair, as Charles Leclerc put a spectacular move…

Now Leclerc cannot wait for Vettel to get up to speed on a simulator he took possession of last week.

“I’m not racing against Seb yet but I will definitely send him a text very soon when he has finished his installation, to try and race against him a little bit, which will be fun,” said Leclerc.

Leclerc hopes he can continue to entertain the fans, to put a smile on their faces, as that was his aim when he opted to take up esports, in conjunction with streaming on Twitch, which he claims has offered insight to all as to his true self.

“I see how my mom and my brothers are here in Monaco, and also speaking with all of my friends,” said Leclerc.

Leclerc’s days at present are divided up between primarily training and practising on the sim, which he says also helps sharpen his reflexes.

Behind the scenes, he is attempting to cook, which he says he is “so very bad at”, so he is rustling up nothing more exotic than pasta and chicken at present.

Leclerc is also trying to learn piano and guitar, as well as reading a few books on the history of Ferrari.

Like any F1 driver, though, Leclerc cannot wait to return to real-world racing, and getting back behind the wheel of his SF1000.

As to when that day arrives, and as to how many races will be included in the championship, remains a mystery at present.

When the cars do fire up again, Leclerc is acutely aware of Ferrari’s place following what was a poor showing in pre-season testing by their incredibly high standards. 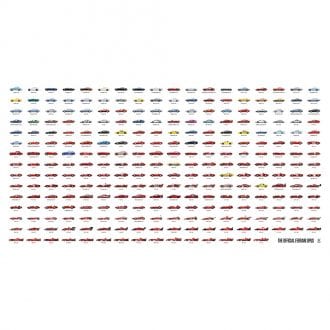 “We still haven’t done the first qualifying, so we are still left with the thoughts we had during testing, and testing was not easy, to be completely honest,” assessed Leclerc.

“I don’t think this whole situation will make a big change in the standing that we saw after testing, so for now, we are not favourites, and we know it.”

Leclerc feels a shortened title race, perhaps of around eight to 10 grands prix, throws up the possibility of there being a surprise champion, even himself, although for that to happen he knows he would have to take a riskier approach to the campaign.

“Obviously having fewer races people will want to take a bit more risk, so yes we might have some surprises, and it might be quite exciting to watch,” viewed Leclerc.

“If it means that it will be me, then I will be very happy but it’s difficult to predict. Mercedes and Lewis [Hamilton] will still be the favourites, even if it’s an eight-race championship.

“It’s going to be very difficult to beat them so I will probably risk a bit more on track, with risky strategies, risky overtakes, and maybe it will pay off, maybe it will not.”

In the meantime, we will simply have to continue to be entertained by Leclerc’s virtual racing prowess.