A little over five laps? Is that really as long as Pirelli’s soft tyre is going to last this weekend? According to Pirelli it is. When Rosberg was asked how long they might last he replied, “Half a lap? Just kidding… they don’t go very far, though.” And so the discussion of the Pirelli tyres rumbles on.

While the grandstands may not be packed, or indeed a quarter full, the limited number of fans won’t get to see much from any driver that looks like qualifying in ninth or tenth tomorrow. Forcing the tyres through an unnecessary heat cycle in Q3 will diminish their life still further and being faced with a pit stop as early as lap 4 is not going to appeal to anyone who looks like the slowest driver in the top 10 after Q2. The track will improve over the weekend, of course, but the soft tyre’s life span doesn’t look very promising at the moment. 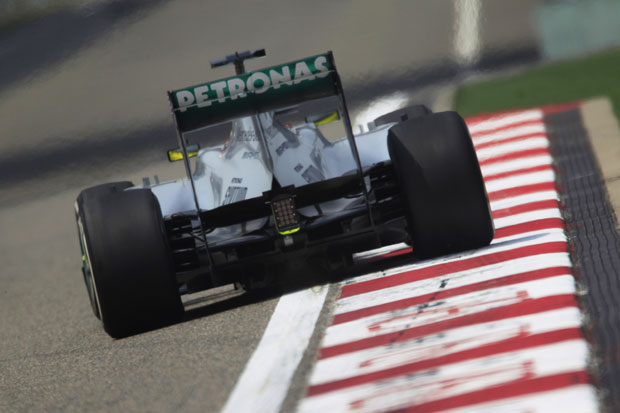 Practice one started slowly with only a handful of cars taking to the track in the opening quarter. Not that many of the marshals minded: they were quite comfortable inside their support vehicles, cigarettes in hand and a jam jar of tea sitting on the dashboard. Some of the security squad, which is as large as the Sky production team, also made the decision to take shelter from the sun by making the most of the bamboo at the end of the paddock. 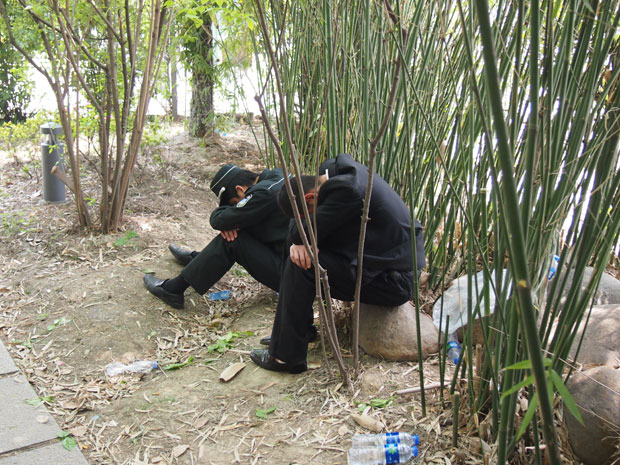 On track Rosberg and Hamilton had moved their way to the top of the timing sheets half an hour into the session. By the end of practice last year’s winner Rosberg was nearly a second faster than third-placed Webber. When the final half hour approached most drivers turned their attention to longer runs on the very green track.

While there is a Porsche Carrera Cup Asia race this weekend, the F1 cars were the first to go out on the rarely used circuit. Both the WEC and the WTCC visit the Shanghai Audi International Circuit in November, but as the name suggests the main client is the German car manufacturer, much to the detriment of the track’s workload this weekend as employees rush around trying to cover up the Audi advertising banners dotted around the circuit.

There was some excitement for the spectators in first practice away from the four-ring cover up with various drivers struggling to find grip. The McLarens of Button and Pérez may not be up at the sharp of the grid yet – their big upgrade, like many teams, is planned for the start of the European season – but it seems the car still has a weakness in the Chinese pit entry area. Hamilton’s 2007 Chinese Grand Prix ended in the gravel there and at the end of first practice Pérez’s car went straight on and came to rest against the barrier in exactly the same place. 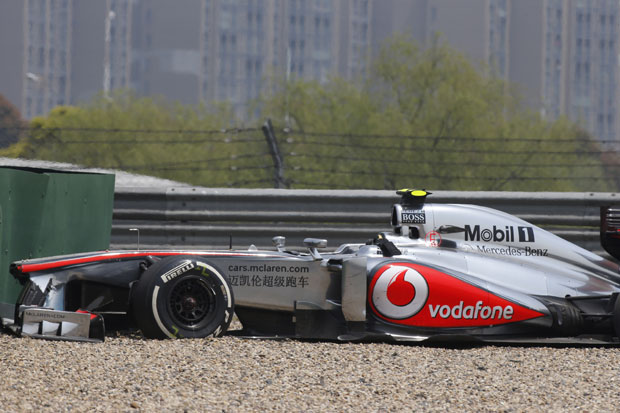 Second practice saw more focus on long runs, although it became clear early on that a ‘long run’ on the soft tyre was a bit of a misnomer. “Pole will be set on the soft tyre,” said Mercedes team principal Ross Brawn after FP2, “because it’s over a second of a lap faster. But it doesn’t last long.” It was Massa that set the pace during the afternoon session and while the Lotus of Räikkönen was second, Alonso, Rosberg and Webber all looked quick in third, fourth and fifth. Hamilton is still feeling a bit “uncomfortable” in the car, but finished in seventh behind Button.

As the post-practice interviews drew to a close I spotted Motor Sport columnist Mark Blundell in the paddock. “I was looking at the marbles on the track after that practice session,” he said of the tyre situation, “and I’ve seen the weather forecast for Sunday [sunny with highs of 21 degrees]. I’m not sure how the drivers are going to cope.” As Red Bull team principal Christian Horner was about to face the media in the FIA press conference talk inevitably turned to ‘Vettelgate’. “You know what I would have done if I was Webber?” he said. “I would have lamped him.” It’s lucky for Vettel that he’s not.

Whether we like it or not, conversation tomorrow is going to focus on, as Webber puts it, “that wonderful word: tyres”. That doesn’t mean that the fastest driver won’t be on pole and at the moment you’d be a brave man to say who it will be, which is just the way we like it.