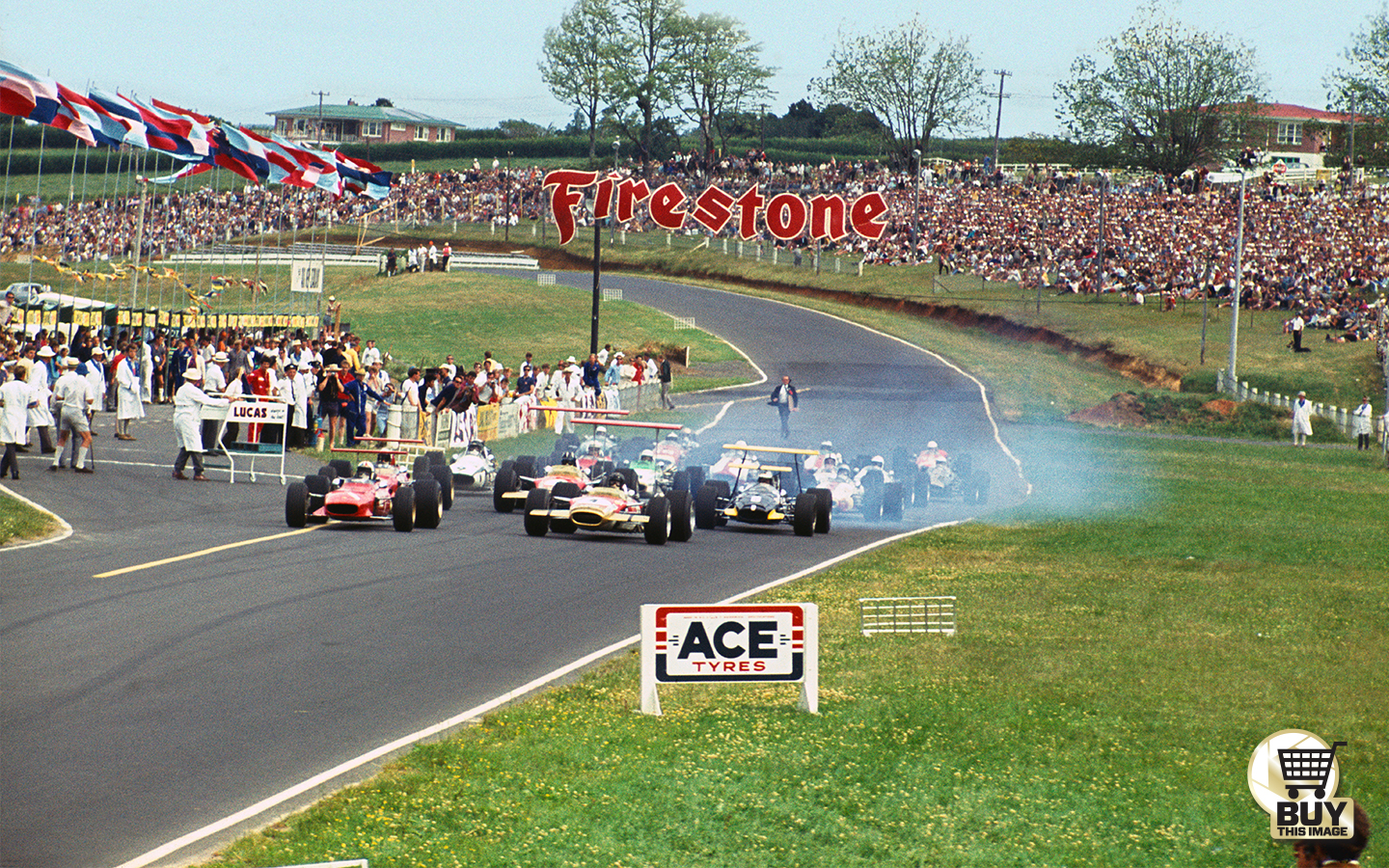 The late Chris Amon’s victory CV included: the outright win that set McLaren’s lucrative ‘Can-Am’ ball rolling; the final race at Germany’s daunting – walls, trees, ditches, banks – Solitude road circuit and the very next weekend a win from the back at Silverstone; the win that broke Ferrari’s Le Mans stranglehold – and broke Ford team-mate Ken Miles’ heart; a win on his Ferrari debut – another 24-hour effort, the second leg of endurance racing’s accepted Triple Crown – followed by a win on his first appearance in front of Monza’s adoring tifosi; no fewer than six defeats of Team Lotus – fronted by Jim Clark and Jochen Rindt no less – spread over consecutive Tasman Series; two victories in his home GP and at the track where he learned his craft as a precocious teenager; a defeat of world champion Jackie Stewart in identical Formula 1 cars; a win on his debut with Matra; another in the BMW that changed touring car racing forever; and one in the last Tasman race in New Zealand – for an obscure marque, whose only international victory this was.

It could – should – have been better. He had started 19 of his 96 world championship GPs from the front row and led seven for a total of 183 laps.

But it’s far, far from bad.

Especially when one considers that probably too much was expected of him too soon and too far from home; that his patron died unexpectedly after a routine medical operation; and that he lost his F1 drive with Reg Parnell Racing to a man-with-works-BRM-engine-attached.

Amon’s career was in grave danger of derailing when he was just 21.

He raced for McLaren, too – although the promised F1 drive never materialised.

Replacing Bruce, whose Cooper commitments at Monaco took precedence, he put McLaren’s M1A on pole for May’s opening round of the Canadian Sports Car Championship at Mont Tremblant – the twisting, tumbling circuit that would become his favourite – and romped to a two-lap victory once an early dice with the Chaparral of Hap Sharp ended when the American car’s drivetrain buckled. 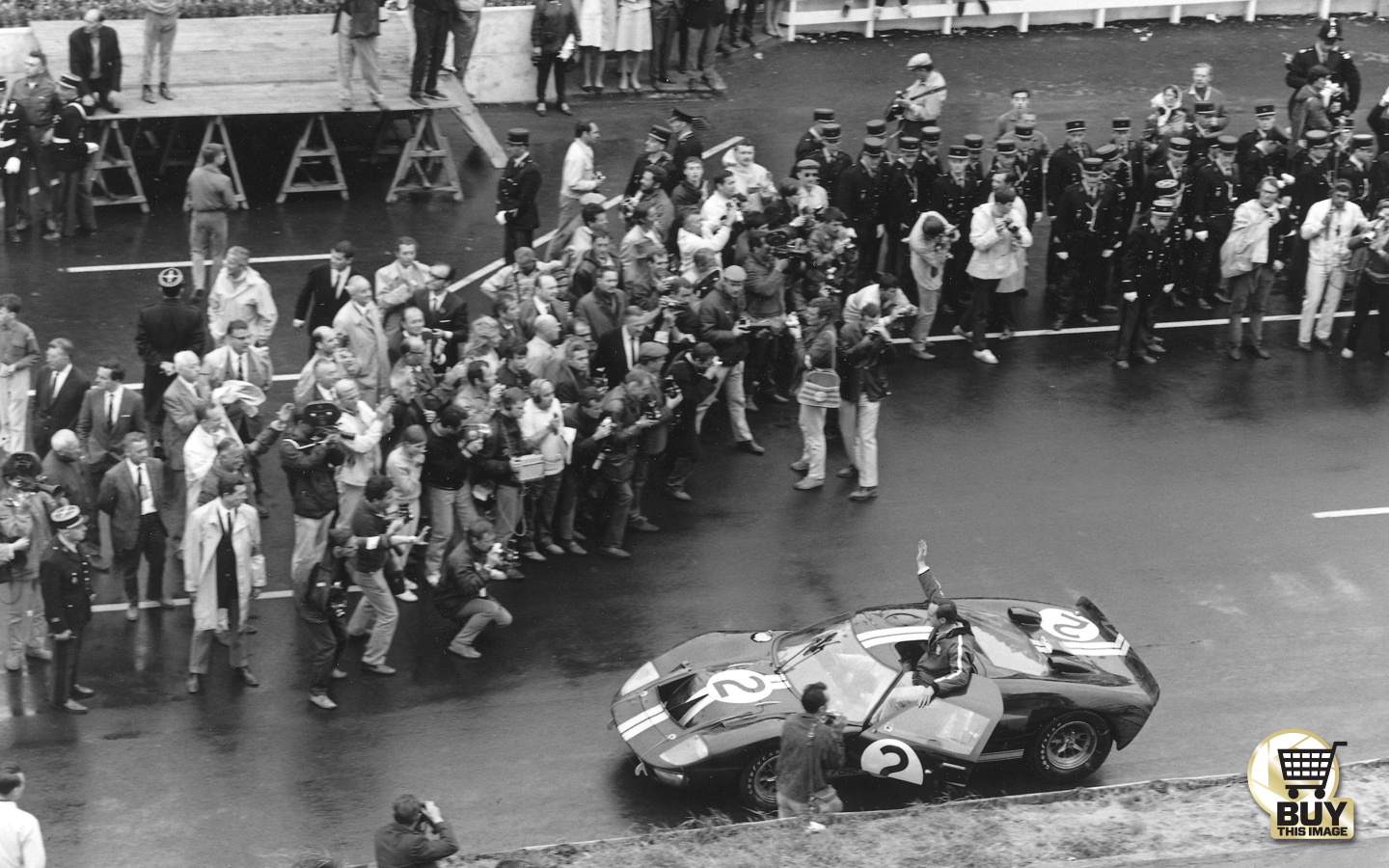 In July, he replaced Richard Attwood – who had taken that BRM engine to Zandvoort for the clashing Dutch GP – at Midland Racing Partnership and guided its Formula 2 Lola T60 to victory at the last Solituderennen.

Forced to start from the rear because he hadn’t practised, he was seventh by the end of the first lap, passed Hugh Dibley (Lola T70) and Frank Gardner (Lotus 30) for second place on lap three, and assumed the lead when John Surtees’ runaway Lola lost oil pressure on lap seven.

McLaren took Amon with him on Ford’s megabucks Le Mans campaign of 1966. The pressure was intense, but when his senior partner bawled “Go like hell!” as he clicked their MkII’s door shut, Amon’s natural talent kicked in.

The same was true when he arrived at Ferrari for 1967 – a farmer’s son from the other side of the world unprepared for and wary of a fractious team with more drivers than seats. Yet there he met “one of the nicest”, an ex-mechanic called Lorenzo Bandini, as disorganised in life as Amon. They clicked immediately – even though the new kid was as quick as the ostensible team leader – and put Ford to the sword at Daytona with their sumptuous and sonorous 330 P4.

Their burgeoning partnership won April’s Monza 1000km, too, the pounding they received from the bankings offsetting Ford’s absence.

But a fortnight later Amon drove through the choking smoke and smells of poor Bandini’s Monaco accident and emerged as team leader. Indeed, after Spa’s Belgian GP, where Mike Parkes was gravely injured and Lodovico Scarfiotti decided he’d had his fill of F1 at its most dangerous with a team at its most fraught, Amon was Scuderia Ferrari’s last man standing.

The party guy grew up quickly. 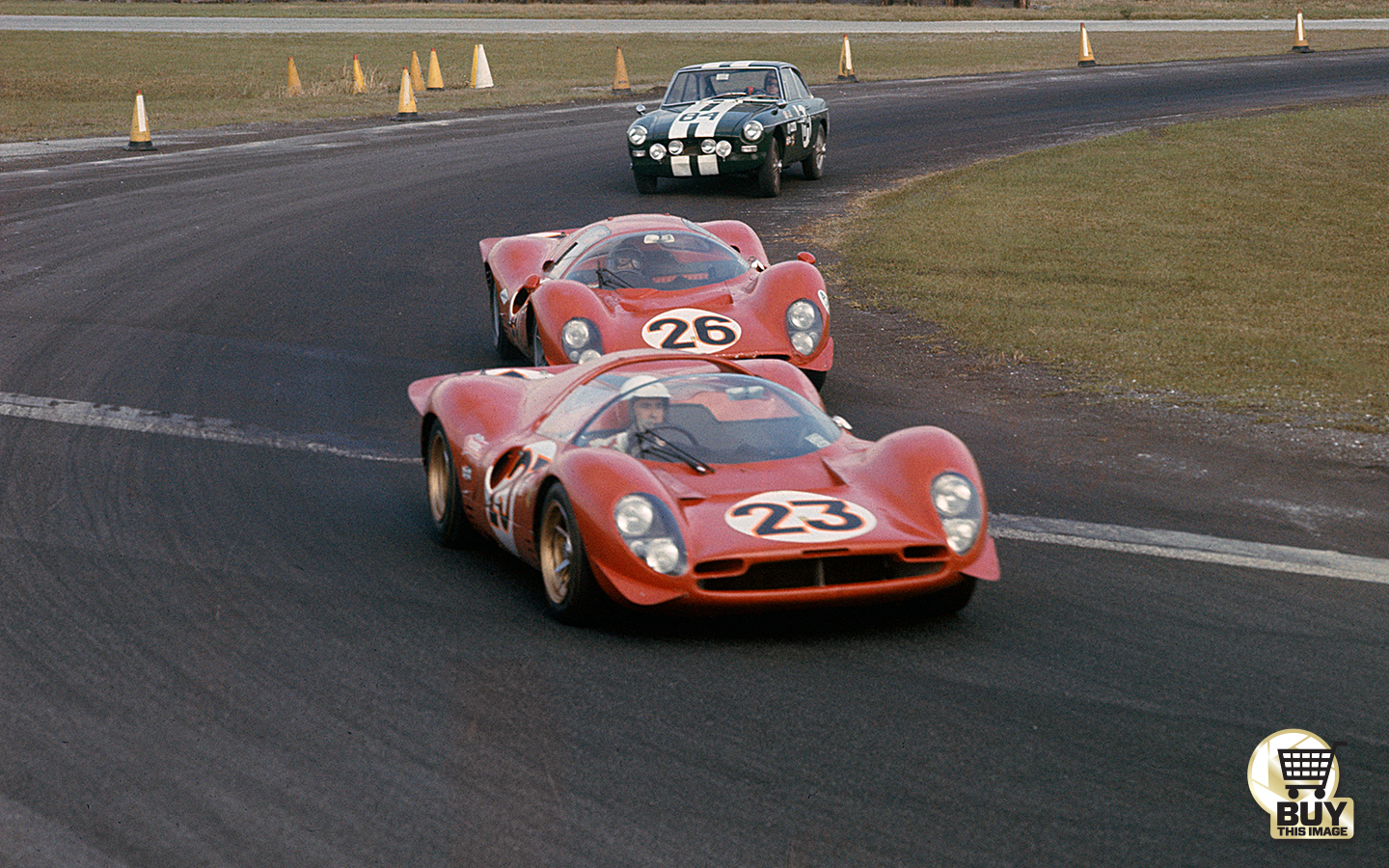 At the first-foot of 1968, driving an inspired combination of nimble F2 chassis and torquey but 10-year-old 2.4-litre V6, Amon gave Clark all he could handle in the Tasman Series, setting a lap record to increase his threat in the closing laps of Pukekohe’s New Zealand GP. At which point the Cosworth V8 of the leading Lotus 49T dropped a valve.

At Levin, Amon’s formative track, the local hero was again hassling when the sport’s benchmark dropped it, twice: the second time while attempting to retake the lead. Amon spun, too, but won.

The best Ferrari – 246T – that he ever drove was even better in 1969 with the addition of a rear wing; and better again when a button-operated solenoid from a Triumph 2000 allowed that addendum to be feathered at Amon’s will.

Having already again won at Pukekohe and Levin, he blitzed Team Lotus at Lakeside’s Australian GP and then clinched the title – the only one of his career – at Warwick Farm despite retiring because of an opening lap tangle with Piers Courage’s Brabham.

At the final round at Melbourne’s Sandown Park, a power circuit, a dramatic change of gearing and the extra 1000rpm this freed saw him breeze past Rindt on the back straight: “The look on his face!”

It was a different story in F1, however, with Ferrari’s V12 left breathless by a Cosworth, happier when in its original 3-litre form, doing what it was designed to do.

Amon simply had to have one and as a result fell for Max Mosley’s patter hook, line and sinker and joined March for 1970 as its ‘guaranteed’ main man. But then the fledgling constructor handed a car to Ken Tyrell for Jackie Stewart.

How could it not, in fairness?

The generally genial Kiwi occasionally lost it big time – his strops ranged from ‘white’ to ‘purple’ via ‘rainbow’ – and he was pissed off by the time of Silverstone’s International Trophy in April.

Despite flitting back and forth to Monza, where he was driving a Ferrari 512S in the 1000km, he qualified on pole and won the first 26-lap heat with some comfort. Thus he had no need to pass Stewart on Dunlop wets superior to Amon’s Firestones in the second heat, yet he closed dramatically as the track dried to make his point.

And score his first F1 win.

The second came in January 1971 with Matra.

The non-championship Argentine GP at Buenos Aires was another two-heat affair, and this time Amon won the second after finishing fourth in the first. He took no prisoners and revelled in the Matra’s handling – March’s 701 was a truck in comparison – but was worried about being lumbered with another operatic V12 that lacked the gruff DFV’s sharpness and punch… 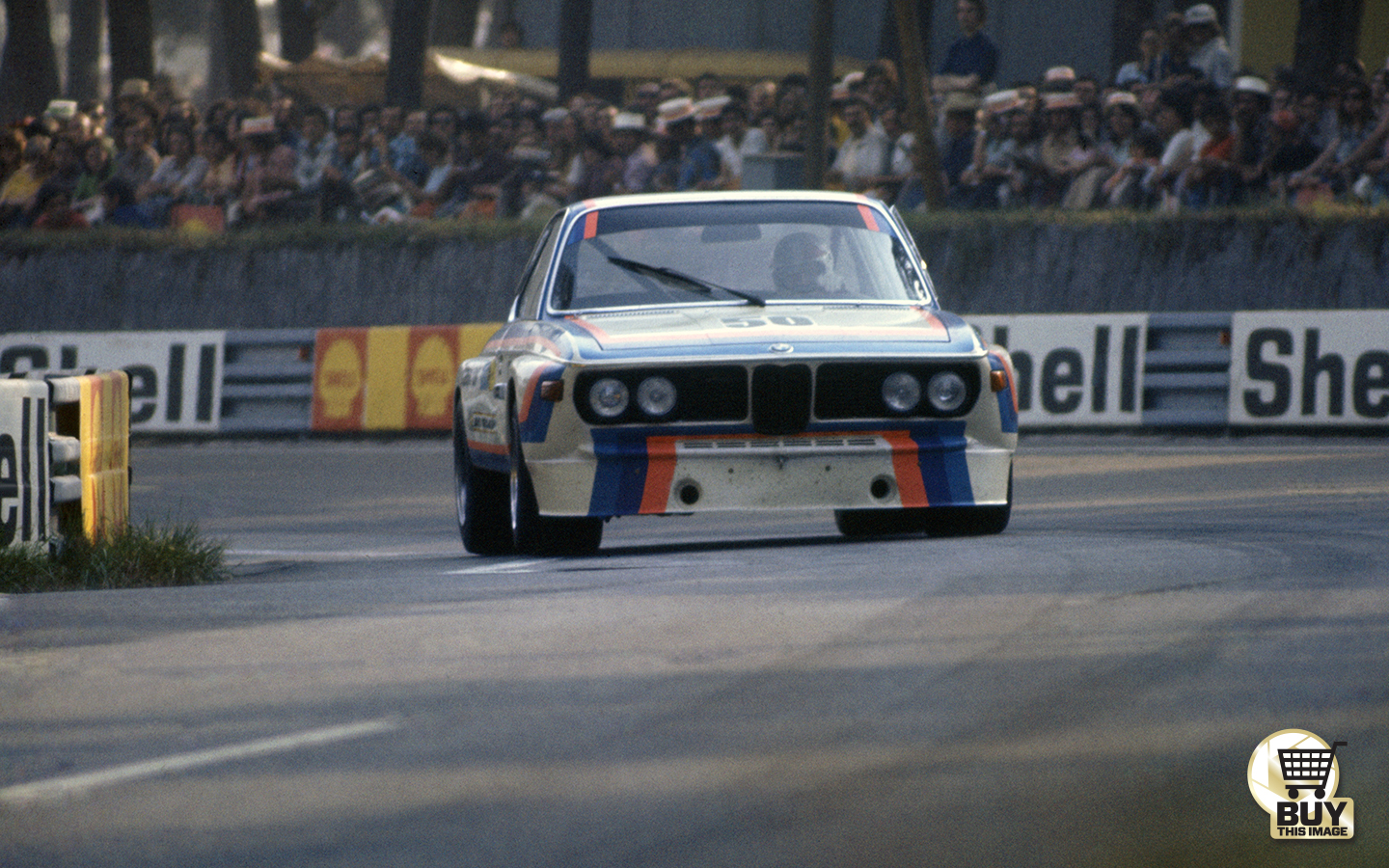 He still needed one – so badly that he rejoined March. This time they fell out even before the 1973 season began and he was sacked.

Amon did his best with Tecno but in truth had lost his mojo. Even ‘replacement’ drives with Tyrrell (in 1973) and BRM (1974) failed to reignite the spark.

He won the 1973 ETCC’s Nürburgring Six Hours, co-driven by Hans-Joachim Stuck on the occasion of BMW’s unveiling of its CSL’s ‘Batmobile’ wing package, and a continued single-seater career appeared to hinge on his building an eponymous car.

The Amon AF101 was a disaster – Chris was astounded when someone bothered to rebuild and race it again many years later – and his fade continued.

But then, driving a Formula 5000 Talon-Chevrolet, he won at Teretonga on New Zealand’s South Island in January 1975.

It came as a genuine surprise to many that he still had ‘it’. But he would prove it beyond doubt with underfunded Ensign in F1 in 1976 – until a sequence of narrow escapes from accidents, most not of his own making, convinced him that he no longer needed to do so.

Being comfortable in his skin was his ultimate and most important victory.