Fifty years ago, Jim Clark wrapped up his fifth home win. Thanks to Hamilton last weekend it’s no longer a British record unequalled 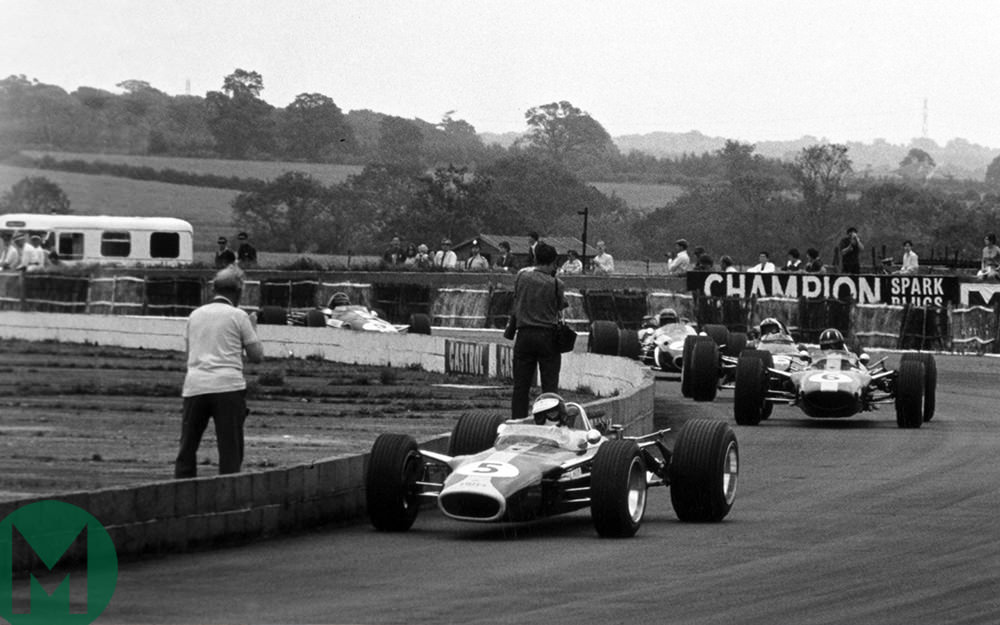 Lewis Hamilton matched Jim Clark in style and substance at Silverstone on Sunday: pole position, (metaphorical) flag to flag, fastest lap. Making the most of the best car and making it look easy.

I wonder if he wondered why everyone else was going slowly. He probably didn’t. But he had time to, as he always seems to when it’s all hooked up: those effortless, fuss-free sweeps of the wheel; the in-car that looks to be in slo-mo.

All Grand Prix drivers want to ace the start, punch out an early lead and control it thereafter, taking as little from the machine as possible – and preferably in front of an adoring home crowd. Very few get that opportunity. Fewer still are capable of it.

The anomalies stem from Hamilton’s failure to convert during his remarkable 2007 debut season and 2013; he finished third and fourth.

These ‘glitches’, however, are more than compensated for by his ineffable win, from fourth on the grid, in the wet of 2008.

The Scot, too, suffered glitches: collapsed front suspension and a sudden and thorough oil leak in 1960 and 1961 – when he was bound for points both times – and fading brakes in 1966.

At the latter race his 2-litre Lotus was underpowered and no match for the Repco-Brabhams of Jack Brabham and Denny Hulme, yet he stole the show with a charge from sixth to fourth after a half-distance pitstop for a top-up of fluid.

On all other occasions, he won:

He was in the minority at Aintree: he liked the place. He’d seen Stirling Moss win there for Mercedes-Benz in 1955.

It helped, too, that Clark had won its non-championship race of April. He had done so at the wheel of the ‘chicken coup’ – a reference to its engine cover – Lotus 24.

Now, though, he was at the wheel of the game-changing 25: a bathtub monocoque in which he reclined with insouciance.

On pole by six-tenths, he fended off an early challenge from John Surtees’ Lola, which was able to hold the Lotus – driven with “precise regularity” – but not catch it.

That Clark’s fastest lap was slower than his April best shows that he had something in hand, and he decided sportingly against lapping perennial rival Graham Hill’s BRM, which was hampered by worn rear tyres but running fourth nevertheless.

It was only Clark’s second GP victory.

Things were different by now, Clark arriving at Silverstone on the back of three consecutive GP victories – all on the same set of Dunlops!

His 25 boasted fuel injection and bore the broad central yellow stripe that one imagines, mistakenly, that it had always worn so iconic has it become.

As in the previous season, he had won the non-championship race at the host track – but this time he made a slow start from pole and was fifth going into Copse.

He was leading and pulling away by lap four.

The track was slick with oil, however, and his car’s handling was not au point due to a switch to smaller-section rear tyres in a bid for better acceleration.

Clark was also worried about fuel consumption due to a kink being found in a bag tank moments before the race. As a result he spent many of the later laps running on a light throttle in top gear.

“Leisurely for Clark is a racing speed for some others,” wrote Motor Sport’s Denis Jenkinson.

Hill never would win his home GP. But, by thunder, he tried.

His BRM harried Clark for 80 laps of busy Brands Hatch – the Kent track’s first hosting of the race – the gap between them never more than 7sec and varying as they negotiated backmarkers on a surface made slippery by oil.

Hill later explained how, in rowing parlance, he had been “pressing off hard” and “taking 10” – holding station between bursts of effort whenever his rival appeared to falter or was hampered.

Clark was more of a cricketer than a rower yet he, too, had been “taking 10” whenever a backmarker intervened, admitting later that he “could hardly believe so much effort was producing so little result” so strong was Hill.

Clark’s modified Lotus 25 was still setting lap records in the closing stages and yet its winning margin was fewer than 3sec.

The rest, bar Surtees’ distant Ferrari, had been lapped.

Clark and Hill, Lotus and BRM – only this time they were at Silverstone.

This race was less intense, Clark opening a substantial lead by mid-distance, but had a twist in its tail.

The Scot’s 32-valve Coventry Climax V8 began to go off song after 50 laps; the other example, in Dan Gurney’s Brabham, had failed on the warm-up lap.

Oil pressure sagging due to surge through Woodcote, Clark took to switching off the engine at this point, somehow maintaining the car’s balance through this daunting corner.

His was a consummate demonstration of skill.

Yet Hill, who had been pumping the brakes furiously since the third lap, was closing, taking 3sec from Clark’s lead to be 7.7sec behind with two to go.

The Englishman suffers in comparison with Clark, but his setting the fastest lap on the last lap was an astounding effort.

Yet still he fell 3sec short.

Hill had joined Clark at Lotus – its Ford paymaster keen to have two cars capable of winning with its new Cosworth DFV engine – but was suffering the familiar slings and arrows of this seat.

The team was scrupulously even-handed, but its newcomer was harder on equipment and hardly blessed with luck: Hill was touring – 60-70mph – into the pits during final practice when broken rear suspension turned his 49 sharply into a bank.

Boss Colin Chapman ordered all the mechanics bar one back to base at Hethel – they flew there – where they worked overnight to ready a tub that had been fabricated but not yet fitted, plumbed, etc.

The damaged car was used as a donor – once the transporter had found its way after suffering problems en route – but very little fitted easily due to updates incorporated in the new chassis.

The crash had been caused by a failed bracket and Clark’s car had to be modified overnight by mechanic Allan McCall in a Ford garage in Brackley.

In the mad rush, the team forgot about him the next morning and he had to endure a harum-scarum tow to a circuit surrounded and inundated by spectators’ vehicles.

Clark led, but was unhappy about a late decision – an unusual circumstance for him – to increase fractionally the camber of the left-front wheel.

Hill, meanwhile, was settling into his new car. It looked odd, with its aluminium ‘former’ rather than fibreglass nosecone, but felt good thanks to it being set-up using his typically fastidious notes.

He took the lead on lap 26 and held it for 29 – until his left-rear suspension adopted a drunken stance. Perhaps inevitably, an Allan screw had not been tightened sufficiently.

He returned following a 60-second stop only to suffer an engine failure after another nine laps.

The win, as was customary, was Clark’s.

Fifty years later it was Hamilton’s.

It’s not difficult to imagine Clark summoning an extra per cent of rear brake bias, or dialling a different engine map or diff setting – he had so much spare capacity, it would have come easily to him.

No, no, no, much better to drive the winning car onto a trailer and be towed around Silverstone by farm tractor by way of a lap of honour.