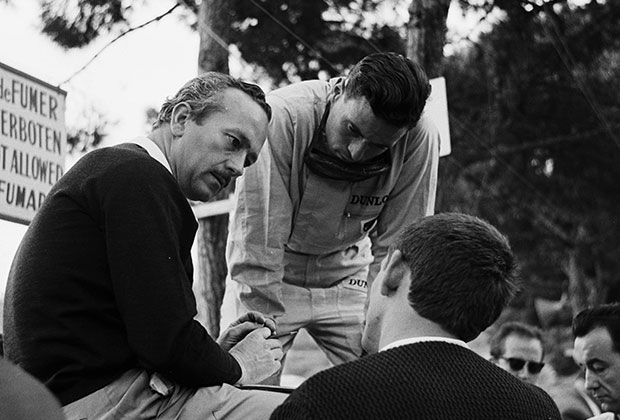 ‘The Terminator’ was troubled by the grip and speed generated on the grass at SW19. He strived to overcome his deficiencies and twice reached the final, only to meet a better man on the day.

Was ‘The Don’, who honed his craft on ‘shirtfront’ wickets baked by a Down Under sun, taken aback by the softer tracks and colder climate of the industrial NW? Unlikely. He was a superlative adapter. His first innings on English soil had resulted in a double-century – and no sward is lusher than Worcestershire’s New Road in April/May.

Before his career was done, Bradman had scored two undefeated hundreds against Lancashire at Old Trafford. Of course he had the necessary skills. It was the other stuff – illness, time lost to bad weather, the odd rash shot, the occasional good ball – that kept his Test average at Manchester below 30.

Clark had his ‘Lancashire’ moments. Four times in five years he won the non-championship Pau GP, its narrow streets deemed ideal for getting one’s Monaco eye in. And yet… 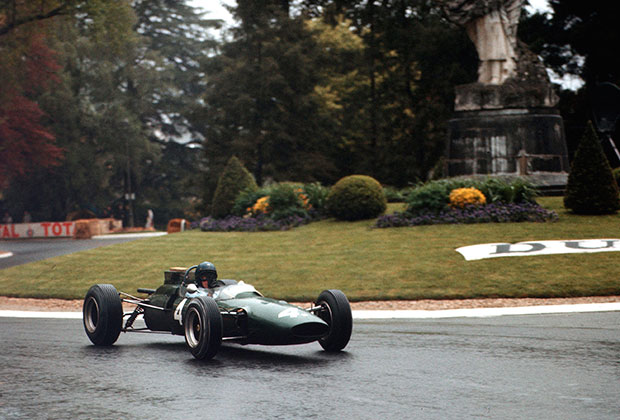 Slated to make his GP debut with Aston Martin at Monaco in 1960, instead he was freed by that F1 team’s (perpetual) unpreparedness to drive a Lotus in the Formula Junior support race. He started from pole and, despite a misfire, was running away with the race when its LT lead properly came adrift. His repair cost him a lap and he finished seventh. A portent.

In 1961, having moved emphatically to the top of the first session’s time sheet, he promptly crashed at Ste. Devote. Motor Sport correspondent Denis Jenkinson wrote that the usually placid Scot had been “looking almost wild”.

Having missed the remaining two sessions while his car was repaired, Clark sat on the outside of the front row – yes, he had been going that quickly that quickly – in a chassis he reckoned “kinky”. Also worried by oil smoke from his four-cylinder Climax, he had a soft plug fitted and waited until the final 10 seconds before firing it up.

Second at the end of the first lap, he went missing on the second. An electrical wire trapped during the rebuild had worn through. An even softer plug was fitted during the subsequent stop, but by the time Clark’s engine chimed, the leaders were on their seventh lap. Thus he was a footnote on Stirling Moss’s day of F1 days. 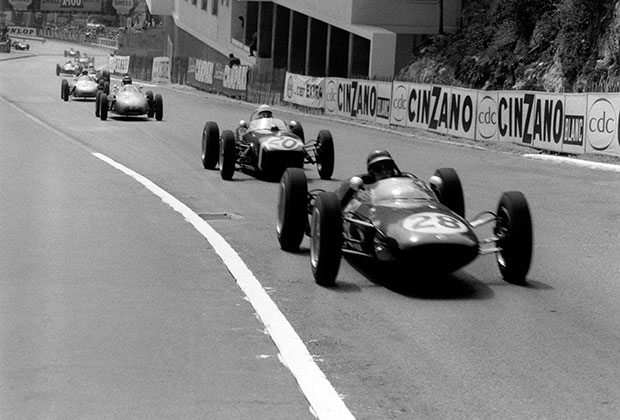 The latter’s career – and life – hung in the balance when Clark took pole by four-tenths at Monaco in 1962. Not that Jenks was impressed: “This little effort was more in anger than good driving, for he had become a bit short-tempered with the cinema comedy.” DSJ was referring to the film celebs clogging the Lotus pit: hardly shy Clark’s scene.

Hampered at the start by wild Willy Mairesse, he spent the early laps attempting to regain places – and a cylinder or two: another misfire. He cured it by switching the fuel pump off and on to weaken the mixture. Cockpit-management is nothing new.

By the time he lost the clutch on lap 12, Clark was, in modern parlance, pumped. Autocourse wrote: “His usual relaxed style had given way to a much more forceful one, with his face screwed up into a grimace of determination and his great natural skill now augmented by a great will to win.”

He was hounding the leading BRM of Graham Hill approaching mid-distance when his Lotus lost fourth and top gears. He dropped back, adapted and regathered, and got to within half a second of his race’s fastest lap before the Climax wilted a few tours later because of the extra strain. 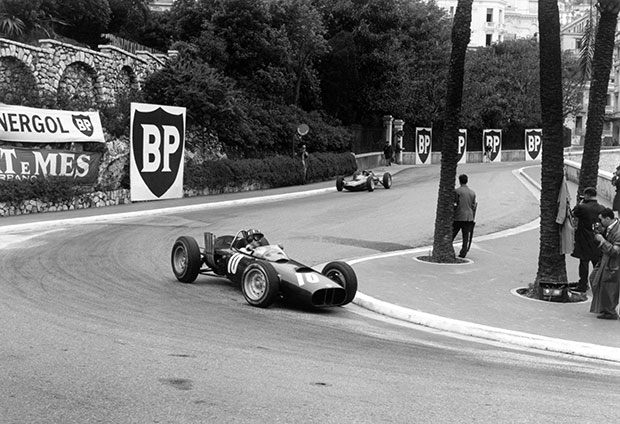 (I shall gloss over 1963 for reasons that will become clear in a future edition of the magazine. Suffice to say that the theme of Clark’s disappointment was maintained.)

Lotus’s Ford-backed bid to win the Indianapolis 500 had by this time contrived to blur Clark’s months of May: taxis, hire cars, even speedboats; private planes, turboprops and, thank God, Boeing 707s. Whatever it took.

In 1964, his US commitments forced him to miss the first day of Monaco practice. Jenks noted his mood: “He was not very happy having gone all the way to Indianapolis and not even having sat in the Lotus-Ford V8, as it was not ready for practice.”

On pole by only a tenth this time, his first lap was typically meteoric – and untypically clumsy. He clipped the bales lining the Chicane. The upshot showed itself on lap 23: his rear anti-roll bar worked loose and began to dangle. His response? To go yet faster, while giving craning officials a reassuringly cheery thumbs-up. Colin Chapman finally felt compelled to call his man in – just moments after the bar had slithered harmlessly to the gutter – and the lead was lost. 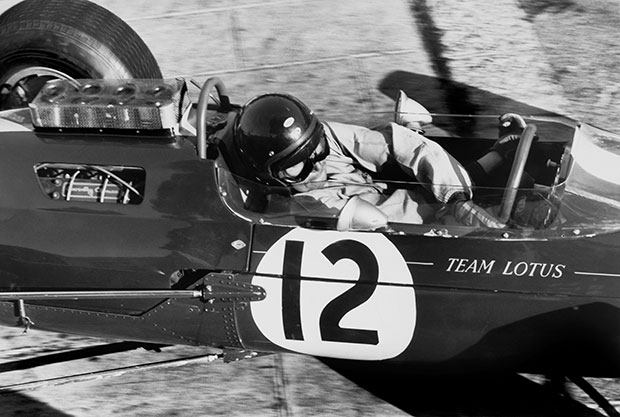 It might have been regained had the Lotus’s engine not, first, begun to fluff because of an ailing injection pump, and then lost its oil pressure. It seized on the final lap. Clark was classified fourth, four laps down.

His Indy schedule precluded any Monaco activity in 1965, whereupon he won at Indy. There’s a moral there.

According to Lotus mechanic Dave Lazenby, although Clark was quite open that he did not like being at ‘The Brickyard’ – the hoopla got to him, although the moolah helped – this was not a subject being constantly addressed. Clark was always positive. ‘Laz’ never saw him down. And he made no mention of a Monaco jinx.

Clark pipped BRM’s Jackie Stewart to Monaco pole in 1966. Again there was a sense from Jenks that this was not the usual assured, unruffled Clark: “… by hurling it [a 2-litre Lotus in a 3-litre category] into corners at ridiculous speeds.”  Admiration or admonishment? It’s hard to tell. Had Jenks tapped into something? There may have been no talk of a Clark/Monaco jinx, but there was an increasing buzzing weight of expectation. Talk was not yet of Hill being ‘Mr Monaco’. Rather it was ‘Will this year at last be Clark’s?’

Well, this year wasn’t. He got jammed in first gear at the start. And so began another charge, which included a pass on Hill for third at Ste. Devote that Jenks reckoned was “now or never”. He wrote: “Hill could do nothing but move over and make room.” 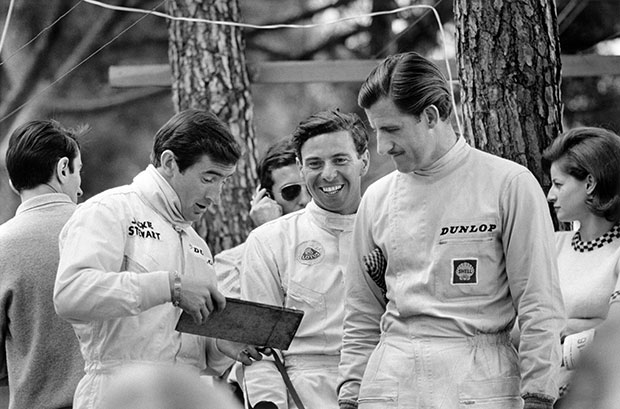 Later that same lap, the 60th, Clark’s left-rear hub carrier sheared. He was third at the time.

In 1967 Clark, again the fastest of the 2-litres in practice, decided to duck up the escape road at the Chicane on the second lap, because a multi-car accident appeared to be brewing on a slick laid by pole-sitter Jack Brabham. Once again he dropped to last place. Once again he embarked on a charge. Setting fastest lap after fastest lap, he was “hurling” – again – through Tabac when a rear spring carrier broke, causing him to spin, without injury, into the wall.

The truth was that a BRM was the thing to have at Monaco in this period. Fast enough to keep the pressure on, it was sufficiently sturdy to withstand its application. Team Lotus’s Monaco reliability record in contrast was direly fragile. No wonder Chapman was so delighted by new recruit Hill’s second place in 1967 (in a BRM-engined Lotus).

The message finally got through and a beefed-up Lotus 49, with a more adaptable Hewland gearbox in place of a ZF, arrived in time for Monaco 1968. It won. And completed a hat trick in 1970. 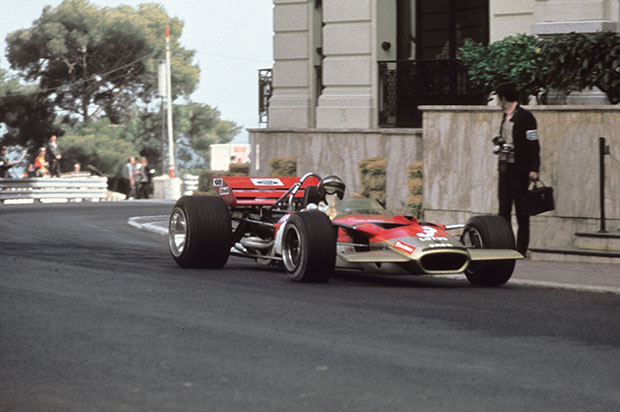 Tragically Clark was no longer alive to enjoy it.

You might reasonably think that he would have grabbed one, possibly two, of those victories given the opportunity. I, however, can’t escape the feeling that Monaco’s ‘other stuff’ had got into the head, under the skin, of a genius that habitually chewed his nails to the quick.

There is nowhere else like Monaco. And nobody was more starkly aware of that than Clark.