The Brazilian Grand Prix through the years 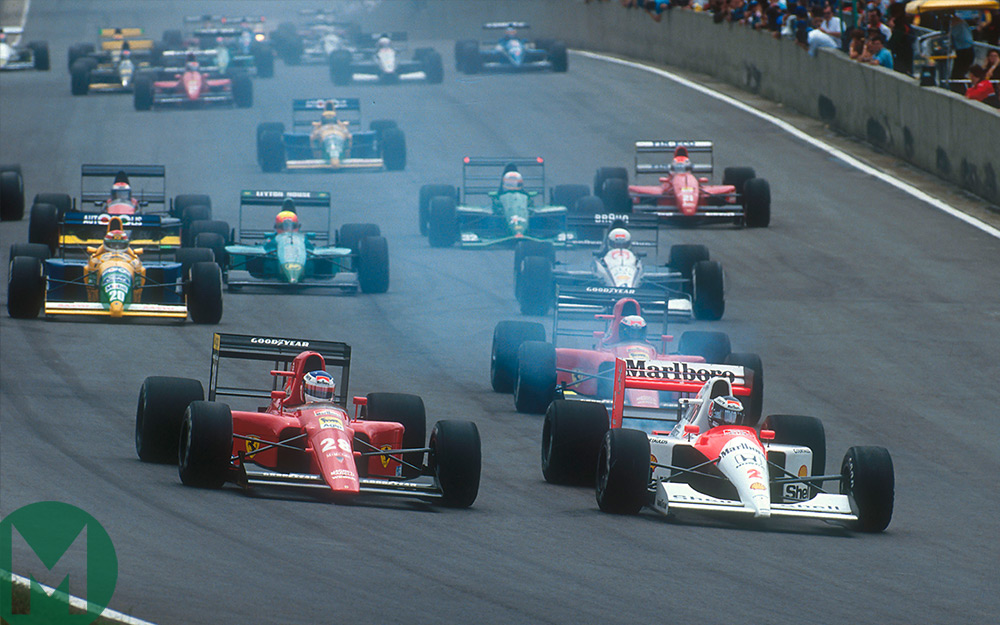 The Brazilian Grand Prix has been a round of the Formula 1 World Championship since reigning champion Emerson Fittipaldi won in 1973 for Lotus. He repeated that success for McLaren a year later after the race was stopped due to heavy rain following 32 of the scheduled 40 laps of Interlagos. In 1975 compatriot Carlos Pace (Brabham BT44B-Ford) beat Fittipaldi to score his only GP success at the circuit that now bears his name.

The race switched to Rio de Janeiro’s Jacarepagua circuit in 1978, where Carlos Reutemann (Ferrari 312T2) repeated his 1977 success to record Michelin’s first victory in F1. Emerson Fittipaldi finished in a popular second that day to score his family team’s best-ever result. Back at Interlagos, the Ligier-Fords of Jacques Laffite and Patrick Depailler dominated in 1979 with Laffite qualifying on pole position, setting the fastest race lap and leading all the way.

René Arnoux scored his maiden victory for Renault in 1980 before the race returned to Rio de Janeiro for the rest of the decade. Reutemann disobeyed Williams team orders to win in 1981 before Alain Prost benefitted when both Nelson Piquet and Keke Rosberg were disqualified amid the ‘water-cooled brakes’ row that overshadowed the following year’s event.

Suspension failure denied Derek Warwick victory on his debut for Renault in 1984 with Prost (McLaren-TAG Porsche) on hand to inherit once more. Nelson Piquet led Ayrton Senna in a Brazilian 1-2 in 1986 and Nigel Mansell won the 1989 race on his debut for Ferrari. Johnny Herbert’s Benetton was fourth that day despite pain from the injuries he suffered in the previous autumn’s Brands Hatch Formula 3000 race.

The race returned to a renovated and shortened Interlagos in 1990 with Prost scoring a record sixth Brazilian victory having switched to Ferrari. Senna lost the lead when he clashed with Satoru Nakajima’s Tyrrell while lapping him. He had to settle for third after changing his nosecone. Senna nursed his car home in 1991 to finally win his home race, the local hero almost too exhausted to celebrate. He repeated that success in the rain two years later as rival Prost spun out.

In 1994, Senna spun out of the lead on his Williams debut as Michael Schumacher scored his first victory of the season. That race also included the spectacular incident between Eddie Irvine, Jos Verstappen, Eric Bernard and Martin Brundle that led to Irvine being banned. Fuel samples taken in 1995 saw Schumacher (Benetton-Renault) and David Coulthard (Williams-Renault) originally disqualified from first and second although they were subsequently reinstated.

The eventual World Champion counted the Brazilian GP among his early victories for the next five years before Williams newcomer Juan Pablo Montoya was knocked out of the lead while lapping Jos Verstappen’s Arrows in 2001. David Coulthard then passed Michael Schumacher into the Senna “S” to claim the 10th GP victory of his career. The 2003 race was stopped when Mark Webber crashed and Fernando Alonso hit one of his wheels. Victory was originally awarded to Kimi Räikkönen but the stewards later declared Giancarlo Fisichella, who’s Jordan had entered the pits on fire as the chaos unfolded, a GP winner for the first time.

The Brazilian GP moved to the end of the season in 2004 when Montoya won his final race for Williams-BMW. The Colombian led a McLaren-Mercedes 1-2 a year later on the day that Fernando Alonso clinched his first title for Renault. Felipe Massa (Ferrari) scored an emotional home win in 2006 as Alonso was confirmed as World Champion once more. Interlagos remained the championship finale for the next two seasons – Räikkönen (Ferrari) beating the McLaren-Mercedes’ of Lewis Hamilton and Fernando Alonso by a single point in 2007 and the Englishman claiming the 2008 title on the penultimate corner of the race. Having changed to a new set of wets as the rain intensified, Hamilton made up more than 12 seconds on the last lap to pass Timo Glock’s dry-shod Toyota for fifth place to snatch the title from race winner Massa.

Jenson Button drove through the field to fifth position to clinch the 2009 championship for Brawn a year before Red Bull were crowned constructors’ champions thanks to a 1-2 finish courtesy of Sebastian Vettel and Mark Webber. Nico Hülkenberg, who had qualified on a surprise pole position for Williams in 2010, led the 2012 race for Force India before crashing into Hamilton to hand Button a final GP victory. Vettel survived contact on the opening lap with Bruno Senna and recovered from the back of the field to finish sixth and claim his fourth world title in a row.