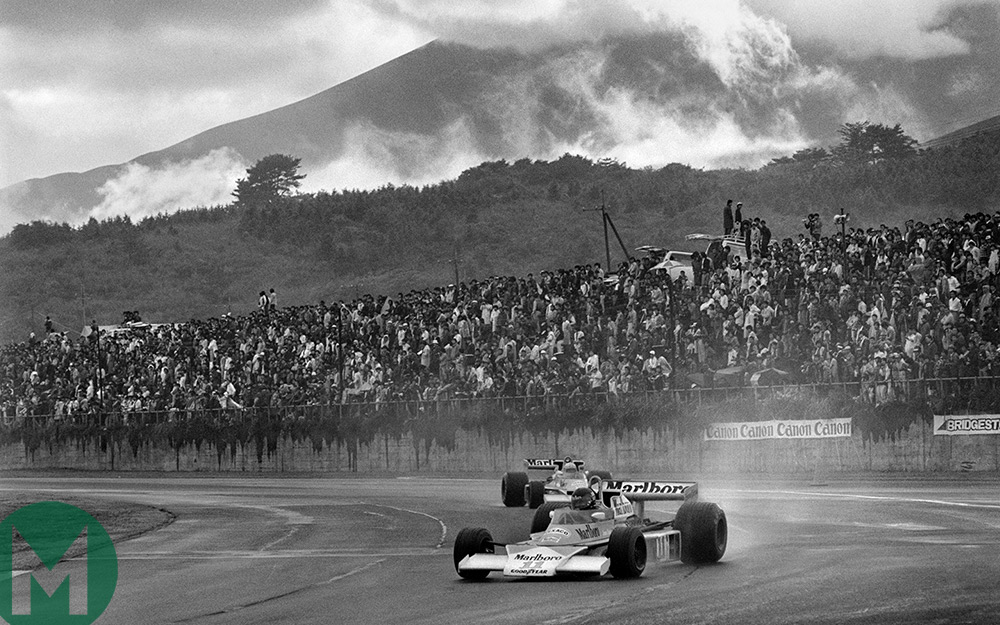 Think of the Japanese Grand Prix and images of classic championship showdowns come to mind.

The first year that Japan was included in the World Championship was 1976 and the race was blighted by torrential rain and poor visibility. Ferrari’s Niki Lauda famously retired his car rather than continue in the unsafe conditions and James Hunt clinched the title despite a late stop for tyres. Almost forgotten in all the drama was race winner Mario Andretti, who won a GP for the second time. Hunt scored his final GP win at Fuji 12 months later but that race was marred by a crash between Gilles Villeneuve and Ronnie Peterson. The Ferrari cartwheeled over the fence and two onlookers were killed.

That was the last Japanese GP for a decade and it was at Suzuki that it returned in 1987. Gerhard Berger scored the first of successive end-of-season race wins for Ferrari that year and Ayrton Senna recovered from a poor start in 1988 to snatch victory and the 1988 World Championship from McLaren-Honda team-mate Alain Prost. The two feuding McLaren drivers collided as they entered the chicane during the closing stages of the 1989 race with the Frenchman unable to continue. Senna returned to the track, changed his nosecone and passed Alessandro Nannini’s Benetton-Ford for the win only to be controversially disqualified, thus handing the title to Prost. Aguri Suzuki finished in a career-best third for Larrousse.

Prost moved to Ferrari for 1990 but they resumed their championship rivalry, which was decided in Senna’s favour when he drove Prost off the road at the start at Suzuka. That left Nelson Piquet to lead Roberto Moreno in a surprise 1-2 for Benetton-Ford. The following year, Senna clinched the title after Nigel Mansell’s Williams-Renault spun and the Brazilian handed the win to team-mate Gerhard Berger on the line.

In 1993, rookie Eddie Irvine drew Senna’s anger (and a post-race punch) when the Jordan driver repassed the race leader after being lapped. A year later saw heavy rain and injury to a marshal that forced the race to be red-flagged. Damon Hill drove one of the best races of his career to hold off Michael Schumacher on aggregate and set up a championship decider in Australia.

Hill was crowned 1996 world champion at Suzuka when Williams-Renault team-mate Jacques Villeneuve’s wheel fell off after a pitstop. McLaren’s Mika Häkkinen clinched both his titles at Suzuka (1998 and 1999), beating Ferrari on both occasions. Pole winner Schumacher stalled at the start and subsequently suffered a puncture in 1998 and Irvine could only finish third a year later, with Häkkinen the winner on both occasions.

Schumacher then beat Häkkinen in the rain-affected 2000 Japanese GP to become the first Ferrari world champion since 1979. He dominated in 2001 and led Rubens Barrrichello in a Ferrari 1-2 a year later on a day when Jordan-Honda’s Takuma Sato delighted his home crowd by qualifying seventh and finishing fifth. Schumacher survived contact with others and dropping to the back of the field to finish eighth to beat Kimi Räikkönen to the 2003 title by just two points.

Qualifying in 2004 was postponed to Sunday morning due to the threat of a typhoon, as it would be in 2010 once more. Wet weather mixed up the grid for the 2005 race and provided a classic. Räikkönen (McLaren-Mercedes) and Fernando Alonso (Renault) stormed through the field from 17th and 16th respectively. Räikkönen made an audacious last-lap pass to snatch victory from Giancarlo Fisichella with Alonso an equally impressive third.

The race moved to a revamped Fuji in 2007, where McLaren-Mercedes rookie Lewis Hamilton scored what seemed to be a decisive victory in the rain. However, he did not score another point and subsequently lost the title to Räikkönen at the final race. Hamilton crashed into Ferrari’s Felipe Massa in 2008 as Alonso scored an unexpected victory for Renault.

The Japanese GP returned to Suzuka in 2009 where the nimble Red Bull-Renaults excelled, Sebastian Vettel winning four of the next five editions of the race. He also finished in a conservative third position in 2011 to become the youngest back-to-back world champion in history. The loudest cheers in 2012 were reserved for Sauber’s Kamui Kobayashi, who finished third.

The 2014 race was a tragic affair, for Marussia’s Jules Bianchi was fatally injured when he crashed into a rescue vehicle that was removing another car.

Mercedes-Benz has dominated in recent years with Lewis Hamilton leading a 1-2 in 2014 and 2015 and Nico Rosberg winner 12 months ago.