Sepang and the Malaysian Grand Prix through the years 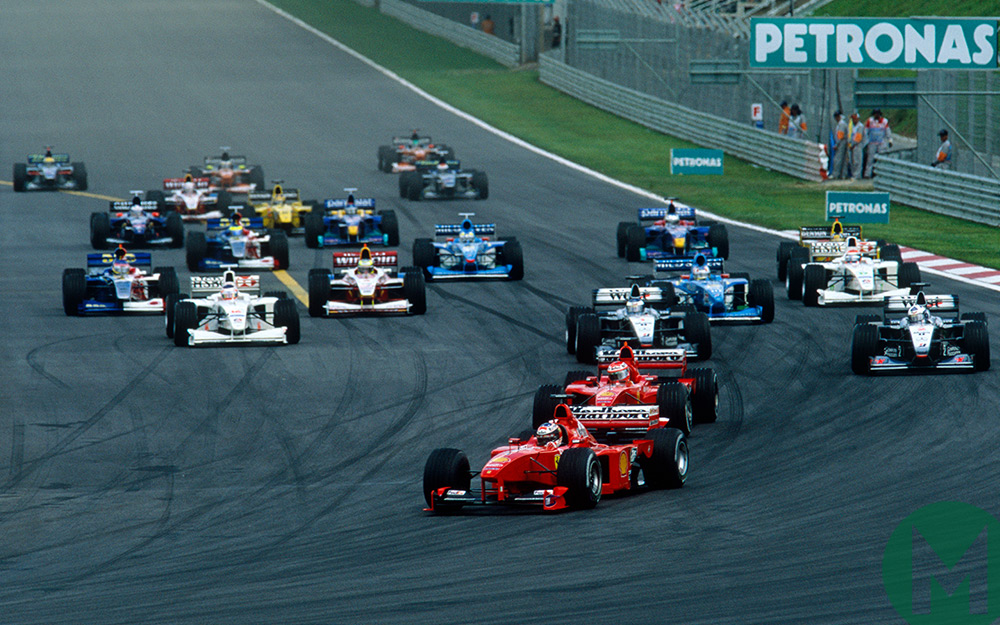 The Formula 1 World Championship visits Malaysia for the final time this weekend. Sepang has played host to the race since 1999 with sweltering heat and torrential downpours a feature.

That inaugural race marked Michael Schumacher’s return from the broken leg suffered during the British Grand Prix. He supported team-mate Eddie Irvine’s championship aspirations in a Ferrari 1-2 before both cars were disqualified for infringing bodywork rules. They were soon reinstated to give Irvine a four-point advantage ahead of the final race at Suzuka, although it was McLaren’s Mika Häkkinen who eventually prevailed.

The following year, newly crowned champion Schumacher won the final race of the year to clinch the constructors’ title for Ferrari. A rainstorm disrupted the 2001 Malaysian GP and forced both Ferraris off the track, although Schumacher and Rubens Barrichello recovered to claim another scarlet 1-2.

Michael Schumacher withstood Montoya’s pressure in 2004 while Jenson Button scored his first podium finish for BAR-Honda. Alonso dominated in 2005 to take the championship lead for the first time as second-placed Trulli gave Toyota its best F1 result. Giancarlo Fisichella, in 2006, won for the third and final time with Renault team-mate Alonso second after a refuelling error during qualifying compromised his strategy.

Alonso moved to McLaren-Mercedes in 2007 and both he and rookie team-mate Lewis Hamilton passed Felipe Massa’s pole-winning Ferrari during the opening lap. Alonso eased to victory with Hamilton second and Ferrari’s Räkkönen third. The Finn scored a decisive victory a year later after team-mate Massa, who had qualified on pole position once more, spun out of the race.

The 2009 race started two hours later than normal at 5pm local time but was stopped after 31 laps due to torrential rain. Championship leader Button (Brawn Grand Prix) was declared the winner when the race was eventually abandoned, with half points awarded for just the fifth time in history. In 2010, Sebastian Vettel jumped from third on the grid to snatch the lead from Red Bull colleague Mark Webber at the first corner. The German controlled proceedings throughout and he repeated that success a year later.

Sauber’s Sergio Pérez was sensational in the rain in 2012 and might have won but a half-spin that slowed his charge, which forced the Mexican to settle for second behind Alonso’s Ferrari. Sepang was then the scene of the ‘Multi 21’ row within Red Bull in 2013, when Vettel passed Webber for the win despite orders not to do so. Qualifying for the 2014 Malaysian GP was delayed by an hour due to heavy rain, but Hamilton qualified on pole and led all the way to victory. Nico Rosberg completed a Mercedes 1-2 in the race but that is the only time since it acquired Brawn in 2009 that the team has triumphed in Malaysia.

Vettel scored his first victory for Ferrari in 2015 in what was his record fourth Malaysian success. Last year Rosberg and Vettel collided at the start and Hamilton’s engine let go after 40 laps. That left Red Bull’s Daniel Ricciardo to score a popular victory from team-mate Max Verstappen and the recovering Rosberg.