A history of the Mexican Grand Prix 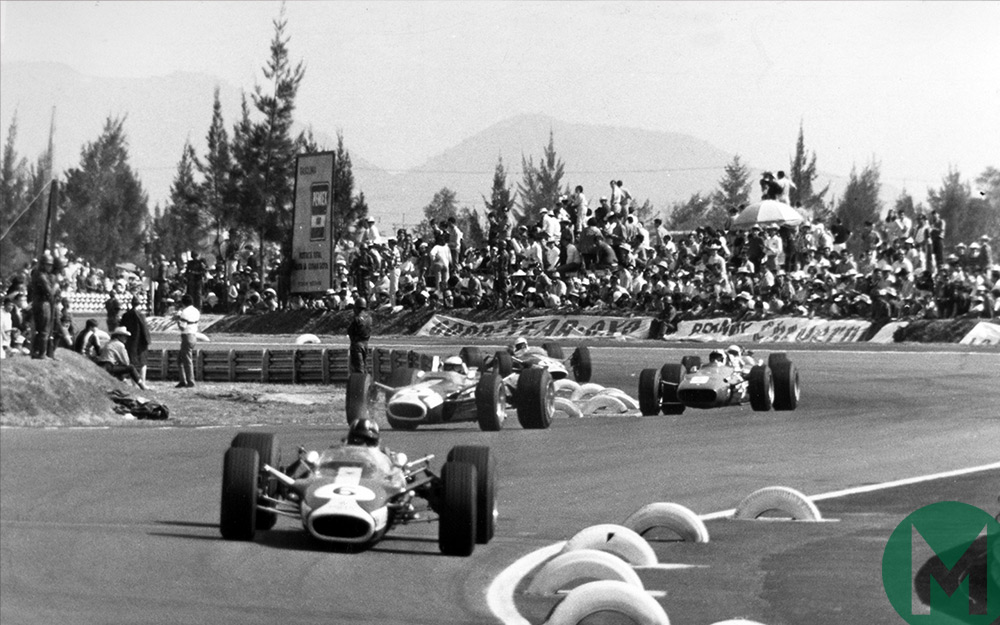 The Mexican Grand Prix has been run in three distinct eras since it was first held as a non-championship race in 1962. That event was overshadowed by the death in practice of local hero Ricardo Rodríguez. Jim Clark won the inaugural race after he took over team-mate Trevor Taylor’s Lotus 25-Climax.

A round of the World Championship from 1963 to 1970, México City was the setting for the dramatic conclusion to the 1964 season. Clark was on course to retain the title before his engine broke within sight of victory. Ferrari’s Lorenzo Bandini, who had earlier crashed into title contender Graham Hill’s BRM, pulled over to let team-mate John Surtees finish in the second-place he required to snatch the World Championship crown.

Richie Ginther won the 1965 Mexican GP – his only victory and a first for both Honda and Goodyear tyres. Twelve months later, Surtees scored his only victory for Cooper-Maserati to claim second in the 1966 standings. Denny Hulme clinched the 1967 World Championship by finishing third behind Clark’s dominant, if clutch-less, Lotus 49-Ford (pictured top led by Graham Hill). México City held the title decider once more in 1968 and Hill won both race and title for Gold Leaf Team Lotus. Neither Hulme nor fellow contender Jackie Stewart (Matra-Ford) finished in the points. Jacky Ickx led Clay Regazzoni in a Ferrari 1-2 in 1970 but the race was blighted by poor crowd control. Many of the estimated 200,000 crowd spilled over the barriers so that the cars raced between an unsafe wall of spectators.

Stripped of its championship status as a consequence, it was 1986 before México City was restored to the calendar, by which time the circuit had been renamed in honour of the Rodríguez brothers. Benetton-BMW’s Gerhard Berger ran without a tyre stop to score his breakthrough Formula 1 victory. The 1987 race was interrupted by Derek Warwick’s crash at the 180-degree Peraltada. Nigel Mansell beat Williams-Honda team-mate Nelson Piquet on aggregate to maintain a mathematical chance of winning a first world title.

On the Archive: The Rodríguez brothers

The McLaren MP4/4-Hondas of Alain Prost and Ayrton Senna dominated in 1988, a year before the Brazilian equalled Jim Clark’s pole record (33). He led all the way to a dominant victory in 1989 while Prost could only finish fifth after having to make an extra tyre stop. Prost switched to Ferrari for 1990 and came from 13th on the grid to head Mansell in a 1-2 for the Scuderia. Senna, who led for the opening 60 laps before being passed by Prost, was soon eliminated when his tyre exploded. This was also the race in which Mansell took second by passing Berger’s pole-winning McLaren-Honda around the outside of the Peraltada.

Senna rolled at the circuit’s most famous corner during qualifying for the 1991 Mexican GP while Riccardo Patrese beat Williams-Renault team-mate Mansell to pole position and then in the race. The positions were reversed a year later with Mansell heading a 1-2 for Williams. Michael Schumacher was third for Benetton-Ford, the first podium finish of his career.

That 1992 race was the last Mexican GP until 2015 when F1 returned on an updated circuit layout that included a stadium section before the Peraltada. Mercedes-Benz finished 1-2 in both 2015 and 2016 with Nico Rosberg winning the former and Lewis Hamilton last year. Both Max Verstappen and then Sebastian Vettel were declared as the third-place finisher in 2016 before penalties handed that position to Red Bull’s Daniel Ricciardo.