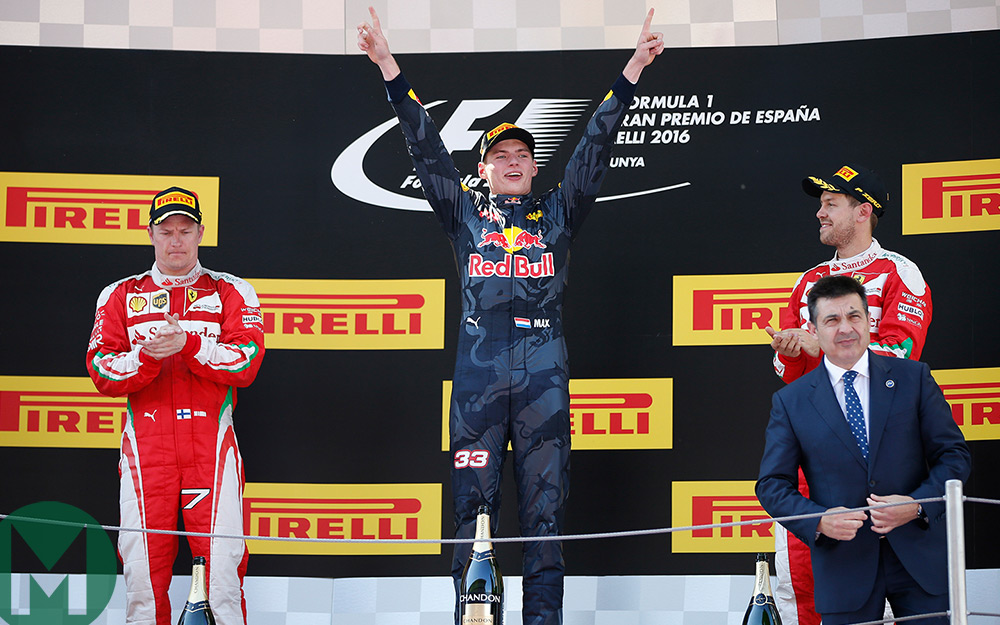 Last year’s dramatic Spanish Grand Prix was just one of many significant world championship races held in Spain so far. Max Verstappen won on his Red Bull debut 12 months ago, benefiting when the dominant Mercedes-Benz pairing of Lewis Hamilton and Nico Rosberg collided. In doing so Verstappen became the sport’s youngest winner, at 18 years and 228 days old it is a record that is unlikely to ever be beaten.

Pastor Maldonado was another first-time winner here when he scored an improbable pole position and victory for Williams in 2012 – the team’s first win since 2004 and on the weekend of Sir Frank’s 70th birthday. Post-race celebrations were interrupted by a pit fire, however. The Renault of the then-defending champion Fernando Alonso dominated in 2006 to the delight of the locals – his first of two victories in the event.

Michael Schumacher produced a masterful display of wet weather driving in torrential rain to score his maiden victory for Ferrari in 1996. The 1994 race was run under the cloud of the deaths at Imola of Ayrton Senna and Roland Ratzenberger and a number of frightening other accidents. That led to a temporary tyre chicane being installed for the race, which Damon Hill won after Schumacher’s Benetton-Ford stuck in fifth gear. The Catalunya circuit opened in 1991 with Nigel Mansell scoring a virtuoso victory following a wheel-to-wheel, 180mph duel down the long pit straight with Senna.

The same two drivers featured in the grandstand finish to the 1986 race – the first of five Spanish GPs held at Jerez. Senna’s Lotus-Renault just held on to beat Mansell’s Williams-Honda by a scant 0.014sec – the third-closest finish in F1 history. Driving an ill-handling turbocharged Ferrari, Gilles Villeneuve held off a queue of four more nimble machines for the last 20 laps at Járama in 1981 to record his sixth and final victory. The previous year’s race lost its championship status after Ferrari, Renault and Alfa Romeo all withdrew amid the acrimonious FISA/FOCA ‘war’. Alan Jones won after Williams team-mate Carlos Reutemann crashed into Jacques Laffite’s Ligier, but it was a weekend when politics overshadowed racing.

There were more politics in 1976 with James Hunt’s winning McLaren disqualified for being too wide. That decision was eventually reversed, the team fined $3,000 instead. The 1975 Spanish GP was a tragic affair that was halted after Rolf Stommelen’s leading Hill-Ford crashed over the barrier at Barcelona’s Montjuich Park street circuit, killing five spectators. Niki Lauda won his first GP at Járama in 1974, a year after Emerson Fittipaldi delivered Lotus’s 50th victory when team-mate Peterson retired from a secure lead.

Jackie Stewart scored March’s first victory (in just its second championship race) in a Tyrrell-entered machine at Járama in 1970. Held at Monjuich Park, the previous edition of the race saw both works Lotus 49s crash heavily following wing failure prompting an overnight ban on high aerofoils from the subsequent Monaco GP. Graham Hill won at Járama in 1968 in the first event since team-mate Jim Clark’s death.

That was the first world championship Spanish GP since Mike Hawthorn won the 1954 race on the streets of Barcelona’s Pedralbes district. It was there that Juan Manuel Fangio won to clinch his first title in 1951 after the tyres of rival Alberto Ascari delaminated during the race.