This week, in the sporting headlines, we have Schumacher the cyclist and Rooney the runner. How long before Hamilton the hurdler? 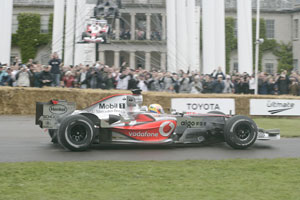 Martyn Rooney, having won his 400 metres in style, has his sights set on gold in Beijing. If only Wayne could run like that, what a footballer he would be.

I mention this as a distraction from rain and recession. Not sure which is worse, though the rain will probably cease before the recession. One man who hopes so is the Earl of March and Kinrara whose considerable powers of persuasion stop short at improving the weather. The 2008 Goodwood Festival of Speed starts tomorrow with a viewing of the Bonhams auction which this year is notable for an extremely valuable D-type Jaguar.

We will be there in force. I am using the royal ‘we’ here as the two chaps who own our magazine will be in attendance as well as the Editor-in-Chief, the Editor, the Publisher and many other lesser mortals from the ‘original motor racing magazine’.

We all very much hope to meet as many of you readers as possible at our tent in Goodwood Park. There will be champagne, a chance to talk to Nigel Roebuck and a complete range of our new DVDs containing the Motor Sport archives. End of plug.

I can tell you that today the Festival arena is looking a little sorry for itself. It’s cats and dogs, and soon to be toads, down here in sunny Sussex. By Friday, though, the place will be humming and this year’s display outside the front of Goodwood House will blow your mind. The supercars will be first out, at 8-45, while the rally cars will venture out into the forest just fifteen minutes later. Then it’s relentless action right through until 6pm when the historic Grand Prix cars will be on the hillclimb course. Pack your wellies and your umbrellas just in case – remember last year? But we all had fun anyway.

Now, a word of advice. You are probably familiar with Dougie Lampkin, the multiple world champion trials rider – if not, you soon will be. Throughout this coming weekend Dougie will be performing some completely insane stunts inside, and outside, Goodwood House. There is nothing this man cannot do with a motorcycle so prepare to be amazed and keep your eyes peeled. And bring your ear plugs – the dragster ‘cacklefest’ on the cricket pitch will demonstrate just how exciting these machines can be without actually going anywhere. 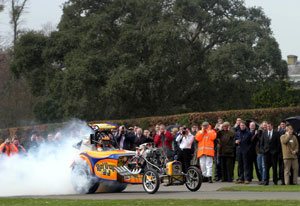 You won’t see any Rooneys or Schumachers, but you will see Lewis Hamilton. On Sunday he will drive his McLaren-Mercedes, a lap of honour in celebration of that wonderful victory last weekend. He must feel like he can walk on water. Perhaps he always has. And I’m personally looking forward to seeing all those Lolas in their 50th anniversary year. Then there’s Petter Solberg, one of the sport’s great showmen, in the WRC Subaru, and the new Airbus A380 will fly just for us, and… it goes on and on…