John Hugenholtz thought the project unfeasible at first sight. Soichiro Honda told him not to worry. 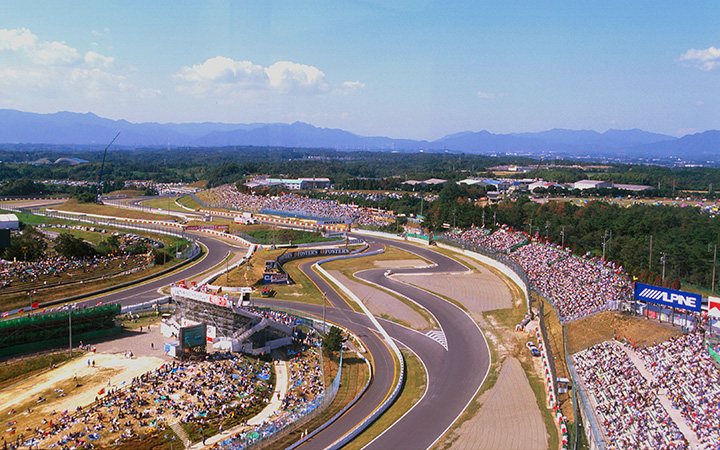 Within days the paddy fields were drained and bulldozed.

Honda had owned the land since 1959, but his layout for a test circuit was potentially fast but uninspiring. He needed help.

Hugenholtz had trained to be a lawyer and worked as a journalist. But motor racing was his passion and in 1949 he became the first director of Zandvoort. 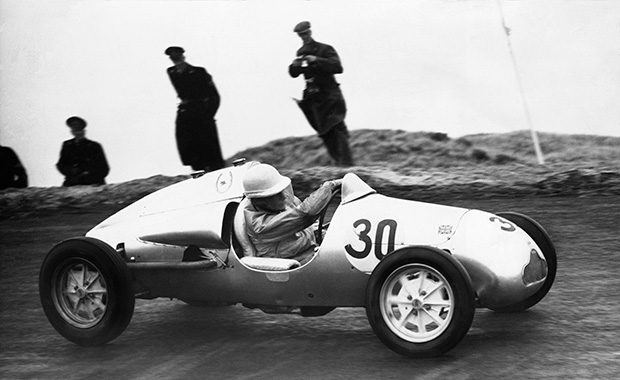 Though he did not design that circuit – Le Mans winner SCH ‘Sammy’ Davis did by adapting and incorporating communication roads built in the dunes by the Wehrmacht – he took careful note of its mix of sweeping bends and slow corners.

When Hugenholtz put that knowledge and passion into action, Suzuka was the result.

Like Davis, he planned to utilise as much of the existing network and move as little earth as possible.

He also wanted a balance between right- and left-handers: hence the crossover.

The original design contained three of them, but the two that coiled tightly where the famous Snake now slithers had been deleted by the time of sign-off in early 1962. 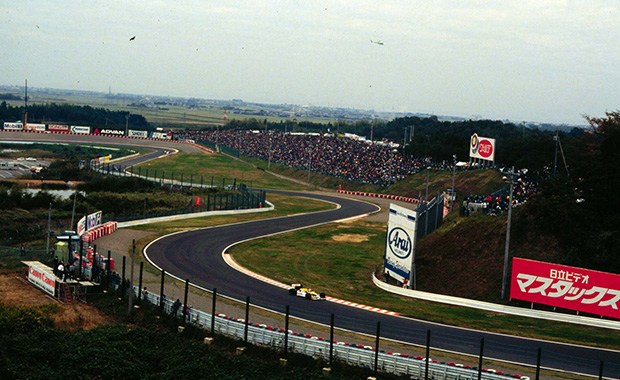 The track was ready for that November’s maiden Japanese Motorcycle Grand Prix. Its first GP for cars occurred the following May and was won by future Formula 1 team manager Peter Warr in a Lotus 23.

Although the circuit was well received by international competitors, it lost both GPs to go-ahead Fuji in 1966. The latter also ran a race for Indycars that same year. (Jackie Stewart won it in a Lola.)

But not until Fuji staged the inaugural World Championship Japanese GP for F1 in 1976 did Honda begin to stir.

Suzuka’s modifications included a re-profiled first corner, the creation of a double-apex right in place of a single sweeper at Degner, and the insertion of a chicane at the end of its 3.6-mile lap.

When Gerhard Berger’s Ferrari won the revived Japanese GP in 1987 – it had not been held for 10 years – the world at last got to see this Scalextric track made real. 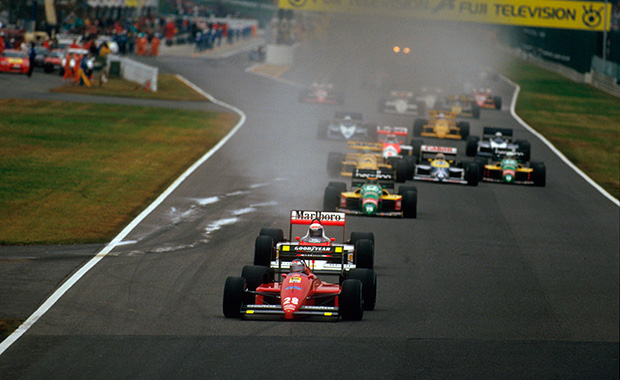 There’s much more to Suzuka than its crossover but there can be no doubt that this imaginative aspect caught the imagination. It seems such an obvious method of injecting challenge, gradient and interest within a smaller area that it’s a wonder why more have not adopted it.

Let’s face it, the world’s third permanent purpose-built circuit did.

The disused banking at Monza peers today between trees to loom above the road circuit’s downhill approach to Vialone, aka the Ascari Chicane. 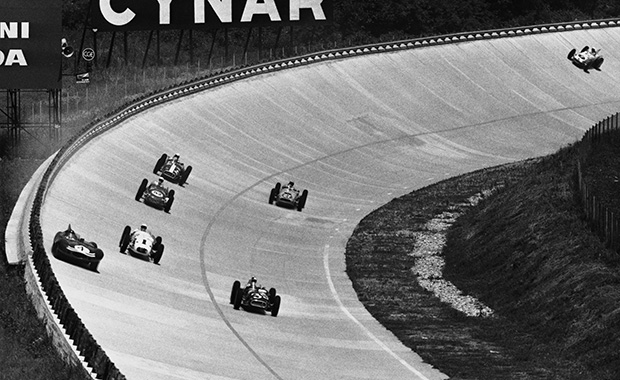 Those tracks were used in conjunction – unlike Motegi’s Twin Ring(s) – on many occasions. They were so disparate, however, that they never felt a satisfying whole.

Walled city Lucca in Tuscany provided the next example from 1935-38. Competitors in its Coppa Edda Ciano – named after Mussolini’s eldest daughter – charged atop wide Renaissance ramparts and above Porta Sant’Anna before looping right, through 360 degrees, to breach the defences via the right-hand ‘barrel’ of said gate.

Winners Mario Tadini, Felice Trossi and Luigi Villoresi had a few moments’ (albeit tree-lined!) respite on this 1.46-mile street circuit before invading the city via the equally squeaky Porta San Pietro.

Coupe René Le Bègue took place in the western Paris suburb of Saint-Cloud in June 1946 and was notable for the first post-war appearance – and a rare defeat for – the 158 Alfettas, plus the participation of Tazio Nuvolari. 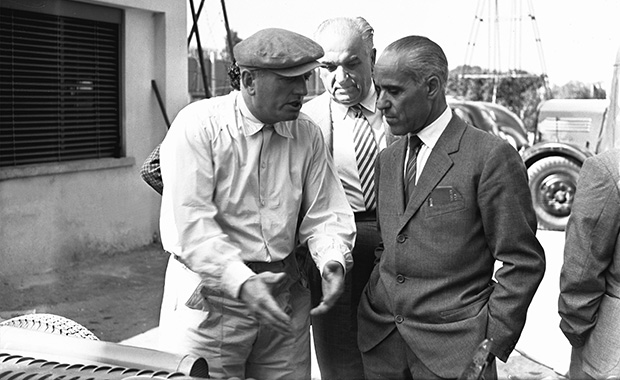 They were upstaged, however, by the monumental façade adorning the 832-metre tunnel that formed the spine of this 3.72-mile road circuit. The Nazis had stored explosives there during hostilities with a view to destroying the city. Now it housed L’Autoroute de l‘Ouest – and this one-off race was by way of an official opening.

Racers emerged from it in grandiose style before swinging left onto cobbled streets and doubling back to vault the autoroute just the other side of the entablature of the tunnel’s western entrance. Then they shot down a ramp and enjoyed a there-and-back blat along either carriageway before plunging into the echoing darkness.

After the Alfas of Jean-Pierre Wimille and Giuseppe Farina suffered gearbox problems, the path to victory was left open for the Maserati 4CL of Raymond Sommer.

Germany also accessed its motorway network – flyovers, interchanges and slip roads – to kick-start the sport after the war. 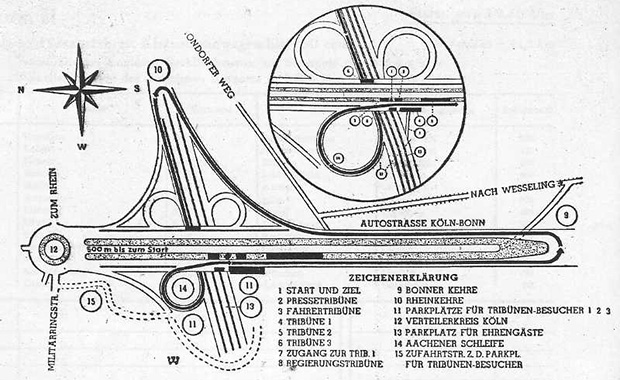 Kölner Kurs on the Cologne-Bonn autobahn hosted races as early as 1948, but lasted only two years.

This track included five hairpins and two crossovers – albeit on opposite carriageways of the same road – and was known as Autobahn-Spinne: the Motorway Spider.

The most notorious of this type was in newly oil-rich, militaristic Venezuela. Even indomitable Stirling Mossconsidered Circuit Los Procéres in Caracas, the unlikely venue for the deciding round of the 1957 World Sportscar Championship, extremely dangerous. His concerns proved well founded. 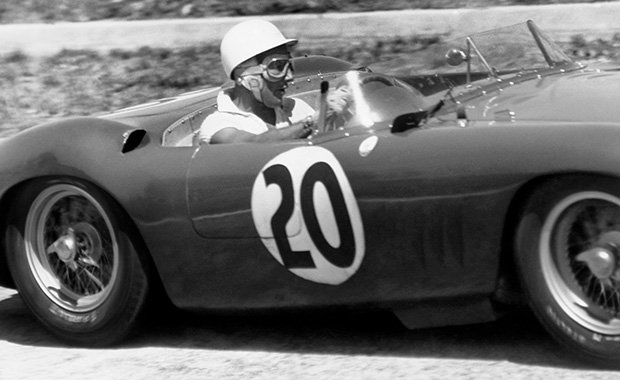 The bulk of its 6.17 miles consisted of parallel flat-out blinds along Autopista de el Valle. At its far end drivers negotiated consecutive clockwise 360s at a knotty double junction – Masten Gregory rolled his Temple Buell Maserati 450S there – and at the other they crossed the motorway before accessing it via roundabout and curving slip road.

Moss, a winner there in 1956, was leading when a backmarker blundered into the path of his 170mph Maserati 450S. Both cars were wrecked – the errant AC Ace-Bristol was cleaved by the impact – yet the drivers emerged relatively unharmed.

Maserati’s nightmare continued when Jo Bonnier’s 300S shed a wheel and collided with the remaining 450S of Harry Schell, which caught fire and burned to a crisp. Already straitened, the company buckled and went bankrupt.

Oh, and Scuderia Ferrari scored a 1-2-3-4 to guarantee the world title. 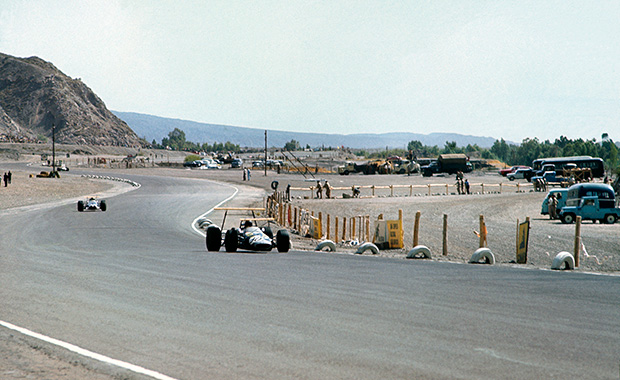 The latter, known as Autódromo General San Martín and abandoned in 1997, saw the Formula 2 works Marches of Marc Surer and Teo Fabi score a 1-2 in the first round of the 1978 Temporada.

The corresponding event of 1979 was for F3 cars and held at Autódromo Juan Fangio. Oscar ‘Poppy’ Larrauri’s Martini beat the March of Michele Alboreto in both heats.

Europe’s figure-of-eight contender was built in Finland: Ahvenisto, near Hämeenlinna. This twisting 1.9-miler began with a bang in September 1967 when Jochen Rindt, Jack Brabham and Jim Clark finished 1-2-3 in an F2 race. 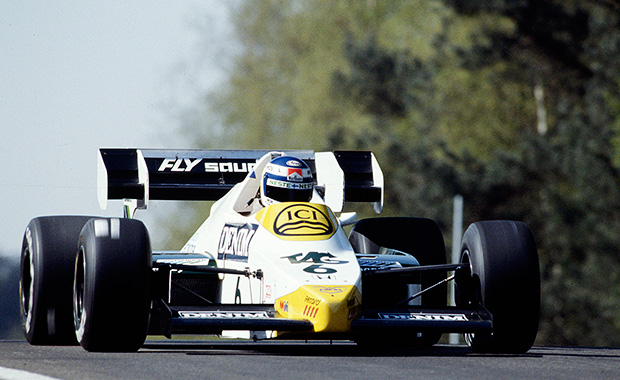 Its unofficial lap record was set by local hero Keke Rosberg during a demonstration of a Williams FW08C in 1984, but the venue would become better known as a regular European Rallycross date of the 1980s and ’90s.

More recently Bilbao’s street circuit included a crossover loop as a prelude to the first of two spans of the River Nervión. The track was used only once, in 2005, and eventual Renault 3.5 champion Robert Kubica shared its wins with Will Power.

In contrast, Sydney’s Oran Park was on the Australian Touring Car Championship’s calendar from 1971 to 2008’s Grand Finale, from Bob Jane to Jamie Whincup.

Opened in 1962, it did not receive its three-cornered, clockwise under-over until it landed the 1974 Australian GP. It hosted that event (for Formula 5000s) twice and Lola-Chevys won both times: Max Stewart in 1974 and Warwick Brown in 1977. 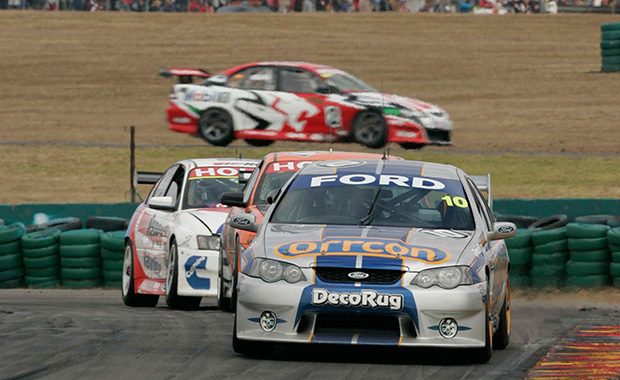 California’s Paramount Ranch made way for a Wild West theme park. And its crossover was partly to blame.

This first purpose-built track west of the Rockies was designed by racers Ken Miles and Dick Vanloren and situated on the 2400-acre ranch purchased from the Hollywood film studio of the same name.

Its two-mile layout included an awkward downhill left that funneled cars through its underpass.

Inaugurated in 1956, it operated for only two seasons. The fatal crashes of George Sherrard and Jim Firestone at its December 1957 meeting – the former’s XK120 struck a piece of unrepaired barrier and the latter’s Frazer Nash clipped the bridge’s concrete parapet – led to a loss of insurance and closure by common consent.

Before being reclaimed by nature, however, it featured in Elvis vehicle Spinout as well as first two Herbie films.

For every Suzuka there’s a Mendoza, a Bilbao, a Paramount Ranch. Hugenholtz and Honda got all their sums right and built something that was not only inspirational but also very difficult to match.

Only one has come close. And yet that has, to my knowledge, never held a race: Ferrari’s Fiorano.