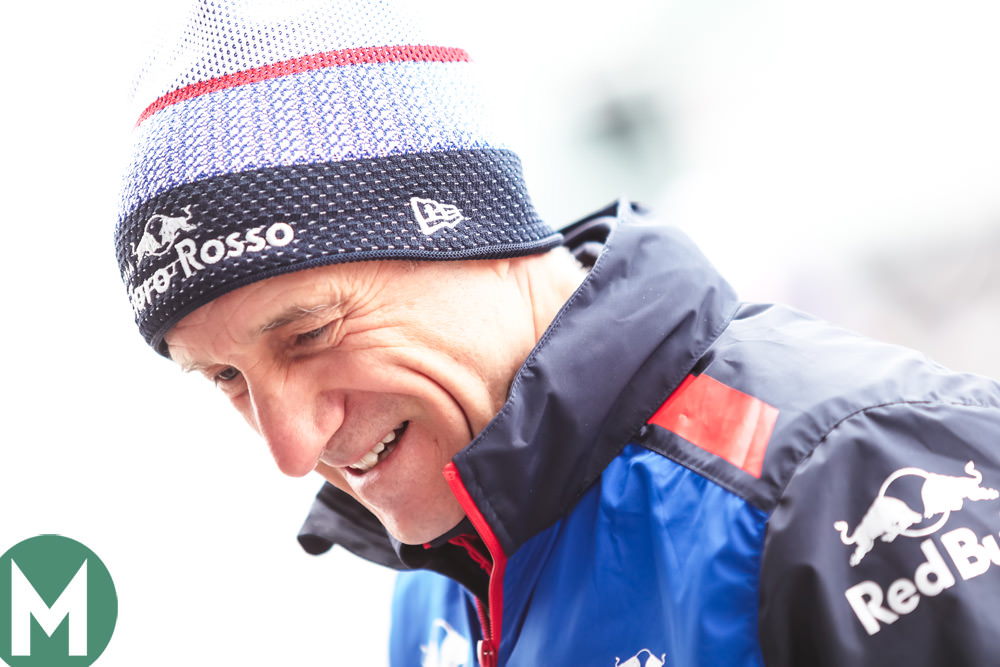 For Honda’s only Formula 1 customer team, Toro Rosso, there seems to be no sign of any of the same breakdowns ahead that ripped apart the relationship between McLaren and Honda.

Team principal Franz Tost puts the strong-starting relationship – established in a short period of time – down to seminars that prevented any culture shocks for the Italian outfit. On a rare break from the pitlane during a busy day of Tuesday testing, no doubt due to teams anticipating snowfall on the following day, Tost cut a relaxed figure.

“Of course there is a cultural difference, because we are in Italy and they are in Japan; we are European. There is a difference between the Japanese culture and the European culture. We have a fantastic relationship with Honda, we also have no problems with communication. We have also made some seminars to educate our people in the way of thinking. How they should approach everything with Honda. So far, I must say it works very well,” he said.

Those cultural differences may seem superficial, but Toro Rosso has emphasised the importance of working closely with its engine supplier. Negativity, for example, is expressed with a more nuanced set of expressions in Japan – answers need to be chosen carefully.

“[Our staff learned] how to write emails and how to respond to emails,” said Tost. “If replying to a Japanese member of staff, you should not say ‘no’, you should describe it in a gentler way. That because Japanese people understand and know things in a different way to us.”

A strong ‘no’ is avoided in Japan, and it’s one of the ways Toro Rosso has strengthened its relationship with Honda.

Drivers Brendon Hartley and Pierre Gasly also have experience competing away from home – particularly Gasly, who contested the 2017 Super Formula season in Japan. There is a possibility that Toro Rosso, which hasn’t yet announced a third driver, could field a Japanese driver.

“There’s no pressure [to field a Japanese driver],” said Tost, “but of course, for a Japanese company, it would be fantastic if a Japanese driver is sitting in the car.” With Honda getting ample space on the car and team uniforms, it may well have the pulling power to put one of its drivers into the car. Former McLaren reserve Nobuharu Matsushita and current Arden Formula 2 driver Nirei Fukuzumi come to mind.

The line-up is already strong enough for Tost’s liking, though sought-after Spaniard Carlos Sainz Jr jumped ship to Renault as part of the deal to switch engine suppliers late in 2017.

“Carlos was with us for three years and we educated him,” said Tost. “Just when he was very well formed for F1 we lost him, and that was a big disadvantage. It was simply because we were in the Renault contract and in order to terminate it we had to give Renault something, and it was Carlos. It was compensation.

The results of this partnership are already unearthing themselves, with Toro Rosso having completed 324 laps in the first F1 test – the most out of any team.  It’s a sharp contrast to the frustration McLaren faced in its four-year relationship with Honda, but was that down to the way the two manufacturers worked together?

Related: F1 testing: Inside the times

In 2014, former McLaren boss Ron Dennis said of Honda’s engine: “[Its progress is] mindblowing, the engine is a piece of jewellery. They are further ahead than expected. The competitiveness of the engine is without question.”

Jenson Button and Fernando Alonso both followed similar party lines and claimed that the engine would rival that of Mercedes, but morale dipped by 2015. In the final year of McLaren-Honda’s pairing, there was no hiding the fact that the two were at breaking point.

“The crucial moment was after the Barcelona testing,” said Eric Boullier late last year. “When we tried to work and help Honda to improve the situation in a very short time, including having discussions with the other engine manufacturers, and without going into details, it became obvious that they again would miss the target that we had agreed for the season. Then by the summer we knew that we had to take a decision, to stay or not to stay. When you look at the last three years it’s been a proper disaster for us in terms of credibility and getting new sponsors,” said the McLaren racing director.

Performance was a key factor in McLaren’s decision to cut ties with Honda – the irate figure of Alonso was a common sight last year – but the working relationship between manufacturer and its customer wasn’t helped by McLaren’s method, according to Honda.

Head of Honda motor sport, Masashi Yamamoto, implied strongly in late 2017 that the pairing was compromised early on.

“Working with McLaren,” said Yamamoto, “I’ve realised that they are a very big company which is very systematic. It’s obviously very strong because of that but at the same time they can find it hard to adapt to change. Compare that to Toro Rosso, it is a company that is growing.

“Take this for an example: if we compare both teams with different cuisines, let’s say McLaren is a very sophisticated French cuisine, that’s the way it is. Then Toro Rosso is more like a countryside, homemade delicious stew where you can add new ingredients.”

Tost and Toro Rosso faced their own battle with Renault last year after a series of engine failures late in the season, and a war of words ensued. While Honda’s poor reliability is fresh in people’s minds, Tost is adamant that the right decision has been made in switching to the manufacturer.

“Remember last year what happened to us? It can’t be worse [in 2018],” he said. “It is impossible. Therefore, I was absolutely not worried about [Honda’s reliability] because I observed that last year the Honda engine was much better than many people thought.”

Thus, Renault’s deal with Toro Rosso ended in sourness and McLaren’s with Honda ended bitterly, but Tost is confident that he can cook up a successful relationship with the Japanese engine manufacturer. After all, Tost loves Japanese food.

“It’s my most favourite cuisine.” Convenient, I replied. “Then the Italian and Austrian kitchens are second,” he chuckled.