Danny Sullivan ‘crashed’ at the Tyrrells’ long before he drove for them in Formula 1.

“Ken and Nora’s was the first place I stayed in the UK,” he says.

That was in 1971 – when the man who would become suave ‘Hollywood Danny’ was just a long-haired 21-year-old in rebellion against his parents.

The linkman in this transatlantic odd match was noted paediatrician and friend to the racing fraternity, Dr Frank Falkner.

Sullivan had been bumming around from job to odd job in New York for two years when this father of his best friend sought him out and gave him direction.

“Have you seen the contract Ken gave me? I can’t even afford to get to the races.”

“Frank was a special guy,” he says. “He took me to my first race – the 1971 Questor Grand Prix at Ontario Motor Speedway – and introduced me to Ken Tyrrell there.

“He even had his son pick me up from the airport and drive me in his Mini to their house in Surrey.

“I stayed for three or four months. Then they said, ‘Look, we love having you, but you’ve got to find your own way.’”

Sullivan got a job at the nearby Bell & Colvill garage and found a flat close to the railway station in East Horsley.

How F1's high-wing era came to a dramatic end

Fifty years ago, Lotus team-mates Graham Hill and Jochen Rindt survived two of the more spectacular shunts in Formula 1’s history. Both suffered a sudden collapse of a ‘skyscraper’ rear…

More importantly he found his calling.

“I went to the Jim Russell Racing School [at Snetterton] on the advice of Jackie Stewart to Frank,” he says. “The caveat was that if I had the talent I could pursue racing as a career – and if not that I should return to university.

“When Jim said, ‘Hey, he’s one of the best we’ve ever had’ – I really believe he told everybody that so they would keep coming back – it was good for me.

The rest of the 1970s were spent hustling for drives and sponsorship to climb the ladder: Formula Ford, Formula 3 and Formula 2.

By the early 1980s, however, Sullivan’s F1 dream seemed to have passed him by. He was back in The States racing Can-Am.

Luckily for him Tyrrell sponsor Benetton was casting its eye over the lucrative American market.

“I got invited to a test at Paul Ricard in late November/early December 1982,” says Sullivan. “There were a whole bunch of drivers there and I was the last to go.

“Actually I had started to walk away from it and was getting out of my driving suit when my backer Garvin Brown – the heir to everything from Veuve Clicquot to Jack Daniel’s – said, ‘What are you doing?’

“I replied, ‘Have you seen the contract Ken just gave me?’ It was something like $10k for the first year, plus 40% of the prize money – and Ken would tell how much the prize money was.

“I even had to cover my own expenses. ‘Garvin, I can’t even afford to get to the races.’

“The start wasn’t my idea. I got hit from behind and had to swerve around the car in front.”

A successful run led to a second invitation from ‘Uncle Ken’ – this time to the long pre-season tyre test at Rio.

“I sat there for eight days while they worked with [established number one] Michele Alboreto. Eventually I did a few laps before they fitted a used set of qualifiers. That was my test: five or six laps.

“I was only a couple of tenths slower than Michele and Ken said, ‘Well, you’ve selected yourself.’”

A solid if unspectacular performance in the subsequent Brazilian Grand Prix was followed by one of undoubted promise at Long Beach: Sullivan ran as high as fourth – ahead of the charging McLaren of eventual winner John Watson – before a tyre vibration relegated him to eighth, albeit still ahead of Alboreto.

“I was living at Brentwood in LA then because the European season hadn’t started yet,” he says. “But Ken called me on a Tuesday: ‘Michele can’t do the Race of Champions [he was busy sharing a Lancia with Riccardo Patrese at Monza’s clashing opening round of the World Endurance Championship]. Get on a ’plane. Come over.’”

This time Sullivan ‘crashed’ in Greenwich with old F3 sparring partner Russell Wood, who insisted on maintaining their tradition of a pre-race curry.

Where perhaps one or two too many glasses of wine were drunk.

The start from the outside of the third row would go even better: “It wasn’t like I had this great idea to dive around the outside. I got hit from behind and had to swerve around the car in front.”

In this fashion Sullivan not only passed the Arrows A6 of former world champion Alan Jones – in the second and final race of his abortive first comeback – but also drew alongside Watson.

He hung around the outside at Paddock before completing the move on the McLaren MP4/1C on the brakes as he angled towards the apex at Druids. 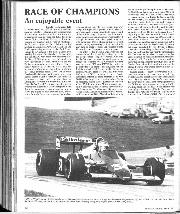 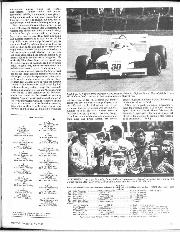 Brands Hatch, April 10th  It would have been difficult to find a weekend more unsuitable for staging a non-championship Formula One race than April 9th/10th, for in the International calendar were…

May 1983 Issue
By Denis Jenkinson

“A move learned from all those years racing Formula Fords at Brands,” says Sullivan. “I had got passed a lot there, too. A useful spot.”

The green Tyrrell 011 was now third behind the leading Ferrari 126C of René Arnoux and the pole-setting Williams FW08C of Keke Rosberg, the reigning world champion.

The turbo Ferrari’s tyres soon faded and Rosberg took the lead on the seventh lap. Sullivan moved up to second that same lap but not before the leader had established a useful advantage.

“I had raced Keke in Formula Atlantic and Can-Am, as well as F1,” says Sullivan. “Clearly he was a very talented guy but I never felt that I was so much slower than him that I had to worry about it.

“Ultimately, however, in terms of the normally aspirated F1 cars of that time the Williams and the McLaren were a little bit better than the Tyrrell.”

Yet the gap between them was coming down on this occasion. Sullivan would be on the champion’s gearbox by mid-distance in this 40-lapper.

What’s more, Rosberg’s left-rear Goodyear was showing the strain. A commentating James Hunt was adamant that the Finn would have to pit sooner rather than later.

“It didn’t frigging slow [Keke] down much,” says Sullivan. “He was really hustling and that tyre was hanging on remarkably well.

“When Benetton went away my appeal in terms of sponsorship went too.”

“He was a master of that kind of stuff. Dancing the car on the throttle. Hadn’t his mother been a rally driver?”

The laps ticked by and Sullivan tried an outside move at Druids on the last of them only to be shown the grass at the exit.

Sullivan’s second place would remain the best result of his single season of F1, though a fifth place at Monaco – won by a ‘dancing’ Rosberg – was the most significant.

“For a rookie year I couldn’t have asked for a better group than Tyrrell,” he says. “Ken was a great manager. Roger [Hill] and Roland [Law], all the mechanics, were super. And Maurice [Phillippe] was a really good designer.

“Had I been with a ‘world championship’ team my capabilities then weren’t going to match what it was capable of.

“I had a number of good performances and Ken seemed pleased. It’s just that when Benetton went away my appeal in terms of sponsorship went too.

“Obviously I hadn’t done enough for Ken to feel that he could keep me on. He asked Garvin for a big number and Garvin baulked. I understood that.”

Instead Sullivan began – with three wins in 1984 for Doug Shierson’s team – a storied Indycar career that would bring him victory in the 1985 Indy 500 and the 1988 CART title, both with Roger Penske’s outfit.

“After my Indy win I had some backers and, given a decent opportunity, I think I could have gone back to F1 for a couple of years. I was in great physical shape and its ‘youth movement’ hadn’t quite started yet.

“It didn’t happen but I felt good enough to have stayed in F1.

“And I had become a real Europhile – which was real strange for some hick from Kentucky.”