Onofre Marimón was killed during practice for the 1954 German Grand Prix. Seven years after the event his compatriot Juan Manuel Fangio wrote: “No death on the track, I think, has ever moved me as did this bitter loss of my gay young friend. It seemed then, and still does today, a cruel trick of fate that he, with so much to live for, should have been singled out to die upon the verge of a race track.”

Fangio had promised Marimón’s father Domingo, an old rival in those chopped and rodded cross-country Chevys, that he would take care of his son. He meant it, too. Those were the days when a man could still be considered a raw hot shoe at the age of 29. 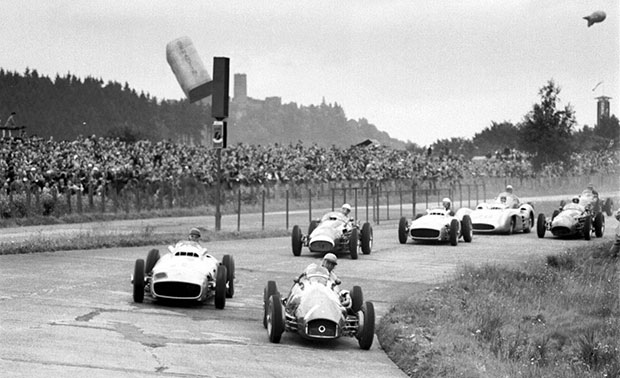 Privately, he won for his dear departed friend ‘Pinocho’.

The day after the accident, despite showing sufficiently pale on the grid to warrant Fangio’s solicitous concern, he started the race but, consumed by sadness, felt compelled to hand his Ferrari over to Mike Hawthorn. There’s always somebody waiting to jump in – that is also motor racing’s way.

Friends Fangio and González felt the same yet acted differently. Response to loss can vary even without the intensification and added complication of the pressure of professional competition and completion.

Racing drivers’ reaction to tragedy stands them apart as a hardy – some think foolhardy – breed. Denied the safe distance of anonymity, they must make their decisions while cocooned by proximity and immediacy. 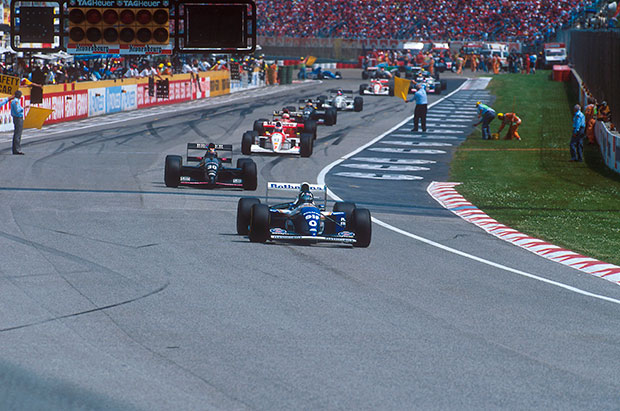 At Imola 19 years ago, Williams switched off the power steering system on Damon Hill’s FW16 and sent it back into battle.

It wasn’t quite so glib of course. A team of great integrity and vast experience had analysed the data, translated its driver’s feedback, assessed the situation, and then – as Patrick Head would admit months later – taken a risk, as racers do.

Hill’s nosecone was knocked askew at the restart and he plunged to last place because of the resultant pit stop. Thereafter he charged to sixth in a car that even the fastest driver of the era – whom Damon supposed to be at the very least gravely injured because of an inexplicable accident – considered tricky to drive.

Some might consider that wrongheaded. I consider it astoundingly brave: The Right Stuff in the circumstances.

Ayrton Senna’s death, of course, threw a black veil over Imola 1994. The eclipse of the man in the yellow helmet retrospectively occluded all else. Roland Ratzenberger’s fatal accident during Saturday afternoon’s qualifying is almost a footnote. The meritorious reaction of his Simtek team-mate David Brabham is a footnote. 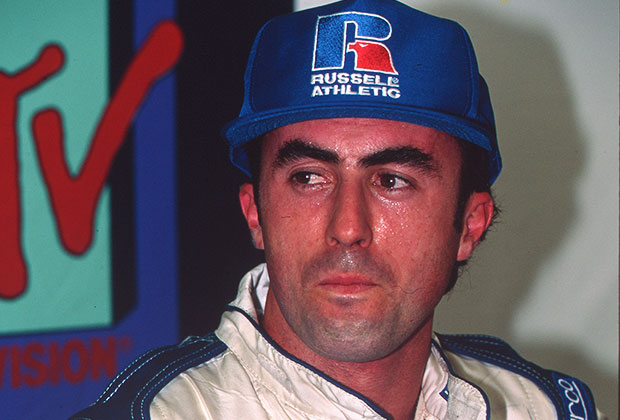 Not that this honourable Wimbledon-born Australian has ever expected or sought headlines for the story that follows:

“I had not experienced anything like it and so it was difficult to know what to do.

“I tried to find out as much as I could about Roland’s accident; certainly I don’t think the team tried to hide anything from me. We watched the video footage and checked the telemetry and knew that his front wing had come off.

“We could also see that he had left the circuit the lap before: he had slowed down and zigzagged. He was deciding whether to come in and have it checked or go for another lap.

“The team made reinforcements to the wing but weren’t exactly sure why it had come off; we thought that maybe it had got loose when Roland went off the road. So I was given the option by the team to say ‘That’s it.”

“I made the decision to do the morning warm-up. I said that if it didn’t feel right then I wouldn’t race. The team was totally supportive of that. 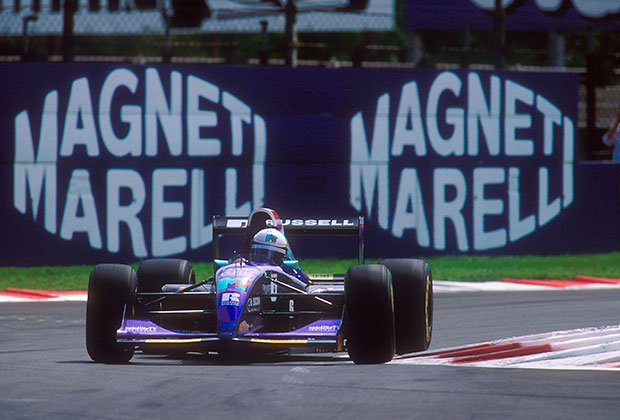 “I don’t know if they sent me out on empty tanks or not but I ended up mid-pack. The fact that the car felt competitive didn’t influence my decision, however. It was when I came into the pits and saw that the very dark cloud above the team had turned grey that I made my decision: to race. We were a small, new team struggling to survive, I could feel a slight lift among them, and I knew that we had to get on with it.

“Also I knew Roland well enough to know that he would have told me to get back out there.

“The adrenalin in my body was very different. I’ve had this feeling only twice in my career. The other occasion was when my young son was burned at Knockhill and I went with him to hospital and so missed the morning BTCC race there in 1995.

“I returned for the afternoon race and had no control over my body. My right leg was jumping all over the place because of whatever was coursing through me. [He subsequently equalled his best result of a difficult season with BMW: fourth.]

“At Imola it took quite a few laps for that to settle down. 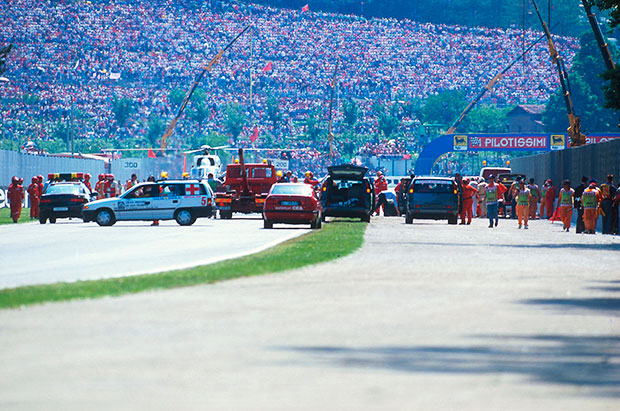 “I thought a Tyrrell had crashed. The dust was just settling when I got there and I saw a bit of blue. It was only after the red flag that I realised that it was Ayrton. There were rumours, but not once did I think he had gone. I wasn’t thinking, ‘This is getting worse. I’m getting out of here.’ I was going to push ahead. If something happened then it was meant to be.

“It helped that I had a duel with Eric Bernard’s Ligier. The Simtek wasn’t fast and often we had lonely races. If that had happened at Imola I would have had more time to think about my situation.

“My wife was pregnant and I think she had it much tougher than I did. She probably had doubts about the car and yet had to watch me drive away in it.”

And then ‘Brabs’ crashed on his 28th lap.

He has his reasons to refuse to confirm if a steering failure caused it: “A puncture was the official line.”

“Any failure that weekend was going to frighten you. No real damage was done, though. I just hit a bunch of tyres. But I do remember feeling that that was enough. 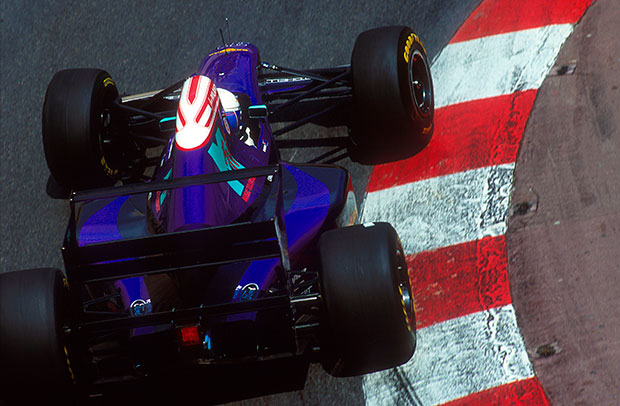 “However, it was only when I got home that night that what I had been through started to sink in. It was only then that I knew for sure Ayrton was dead – I read about it on teletext, I think. There was no big letting go of emotion but there were tears in my eyes.

“People view death in different ways. Mine allows me to move forward quite quickly. Some outsiders thought we should not have raced, that it was in bad taste. I based my decision purely on what I felt to be right and not what others might think, good or bad. I have never regretted it.”