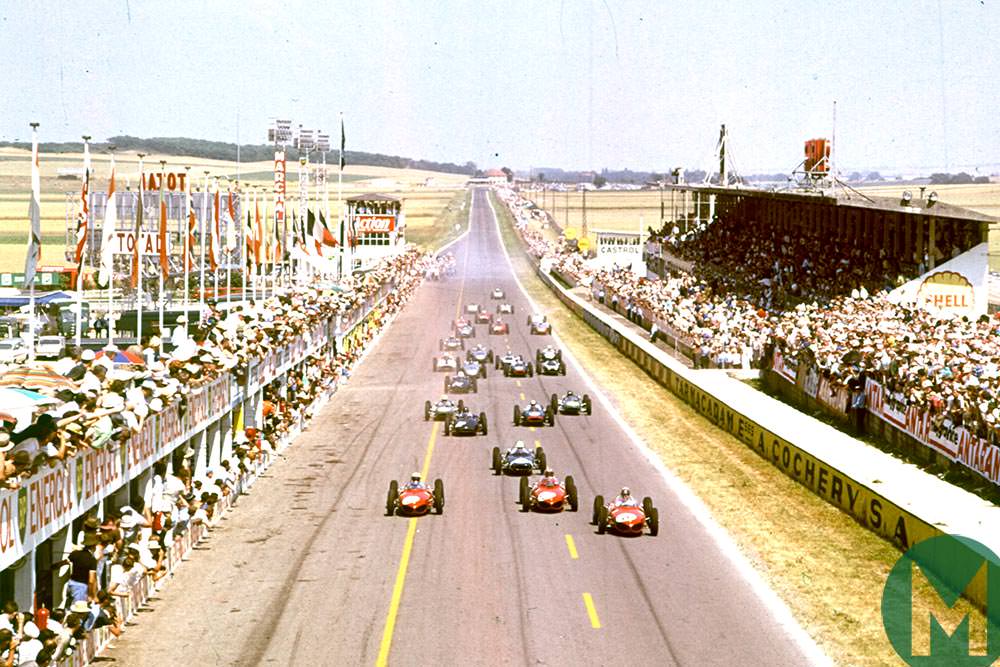 1927 America’s first Formula 1 World Champion Phil Hill was born in Miami in 1927. That moment of triumph came amid tragedy for he clinched the title at the 1961 Italian Grand Prix on the day that Ferrari team-mate and title rival Wolfgang von Trips and 14 spectators were killed. Hill won three GPs and 14 rounds of the World Sportscar Championship during his career, including the Le Mans 24 Hours on three occasions.

1930 Stuart Lewis-Evans was born. The son of a star of Britain’s 500cc Formula 3 scene, Lewis-Evans was a member of the successful Vanwall squad the won the inaugural Formula 1 Constructors’ Cup in 1958. He finished fourth on his championship debut for Connaught in the 1957 Monaco Grand Prix and qualified on pole position for that year’s Italian GP having switched to Vanwall. A full-time member of Tony Vandervell’s team in 1958, Lewis-Evans was third in Belgium and Portugal but suffered fatal burns when he crashed during the final race of the season in Morocco.

1981 Roberto Guerrero led Eje Elgh in a 1-2 for the black Maurer-BMWs at Thruxton in round three of the 1981 European Formula 2 Championship. Both were protested after the race and Elgh disqualified on a technicality but was reinstated on appeal. Riccardo Paletti finished third for Onyx Race Engineering. Also driving March 812-BMWs, Thierry Boutsen (works) qualified on pole position and Marc Surer (Marcus Hotz Racing) led before his tyres degraded.

1985 Ayrton Senna gave a masterclass in wet weather driving to score his maiden Grand Prix victory in the Portuguese GP at Estoril. He qualified his Lotus-Renault on pole position in the dry and then led all the way in terrible conditions to beat Michele Alboreto’s Ferrari by over a minute. Elio de Angelis would have completed a Lotus 1-2 but finished fourth after running wide and suffering a slow puncture. Conditions were so adverse that team managers tried to get the race stopped early and Alain Prost crashed on the straight while chasing de Angelis for second.

1946 Motor racing was quick to return to the continent after World War II and Nice held the opening major race of the 1946 season. Luigi Villoresi’s Scuderia Milano Maserati 4CL dominated proceedings by qualifying on pole position and winning comfortably. The Italian led from the start before taking three minutes to refuel. He recovered to pass Raymond Sommer’s Alfa Romeo 308, which had lost first and second gears, to cruise to a comfortable victory.

1975 Popular Canadian star Greg Moore was born in British Columbia in 1975. He graduated to the Champ Car World Series as a 20-year-old and won five times during his four seasons with Forsythe Racing. Fifth in the 1998 standings, he had just signed a long-term deal with Team Penske when he was killed during the 1999 Marlboro 500 at Fontana. 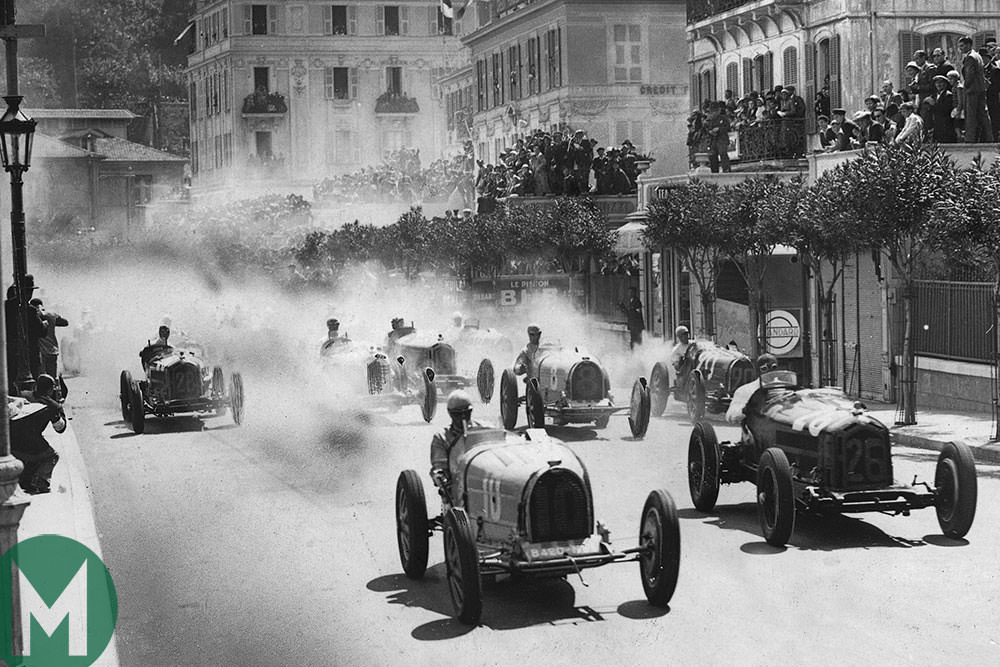 1933 Achille Varzi won a famous race-long duel with Tazio Nuvolari at the Monaco Grand Prix (pictured) when his rival’s Alfa Romeo broke down on lap 99 of 100. Nuvolari was disqualified after his mechanics helped him push the car over the line. On the suggestion of clerk-of-the-course Charles Faroux, practice times were used to decide the grid for a Grand Prix for the first time and Varzi qualified on pole position. Baconin Borzacchini inherited second-place at the finish and Philippe Etancelin ran third before his differential failed. Rudolf Caracciola fractured his thigh so badly in practice that he was out of racing for a year.

1962 Stirling Moss suffered injuries during the Glover Trophy at Goodwood that ended his racing career. The race was won by Graham Hill’s new BRM V8 but Moss lost three laps in the pits to rectify gear selection issues. He lapped at record pace once he returned to the track before crashing his UDT-Laystall Lotus-Climax at St Mary’s. Moss spent a month in hospital and eventually announced his retirement from the sport.

2000 The British Grand Prix was held in Easter and the meeting was marred by the inevitable poor weather. Heavy rain forced waterlogged car parks to be closed during practice although race day was dry. Rubens Barrichello’s Ferrari led from pole position but David Coulthard (McLaren-Mercedes) made the most of that small mistake to take the lead into Stowe on lap 31. Barrichello retired and Mika Häkkinen chased his team-mate across the line in a 1-2 for McLaren.

1983 German Formula 1 driver and endurance race winner Rolf Stommelen was killed during the Riverside’s IMSA race in 1983. He was third in the 1970 Austrian Grand Prix for Brabham and counted three victories in the Daytona 24 Hours among his 11 major World Sportscar successes. The best result he achieved at Le Mans was second in 1979 when sharing Dick Barbour’s Porsche 935 with owner and Hollywood star Paul Newman.

2005 The last 11 laps of the 2005 San Marino Grand Prix were superb (pictured, below) as seven-time champion Michael Schumacher harried the Renault of young rival Fernando Alonso. The Spaniard withstood the pressure to score his third win in a row by just 0.215sec. Not that British television viewers saw all of the action for ITV went to an advertising break as the race reached its conclusion. Kimi Räikkönen qualified his McLaren-Mercedes on pole position and led before his driveshaft failed. The third-placed BAR-Honda of Jenson Button was disqualified and his team was excluded from the next two races as a consequence. 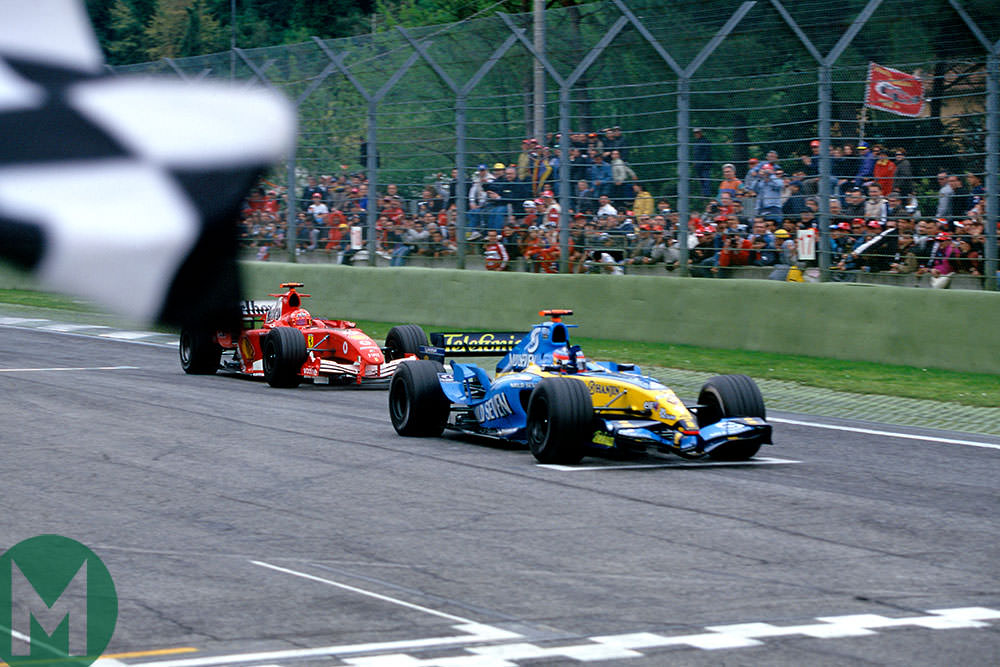 1928 Frank Lockhart was killed during a Land Speed Record attempt on Daytona Beach in Florida.  His career at the top of North American racing was brief but successful. The rookie arrived at Indianapolis without a ride in 1926 and took over Peter Kreis’ Miller when the more experienced driver fell ill. Lockhart qualified 20th and took the lead on lap 60 before pulling away from the field. He was two laps ahead of the nearest challenger when rain forced a result to be declared after 160 of the scheduled 200 laps had been completed. Lockhart was runner-up in that year’s AAA National Championship and won another nine such races before his untimely death two years later.

1981 Felipe Massa was born 37 years ago in São Paulo. The Brazilian won 11 of the 267 Grands Prix he started and was championship runner-up in 2008. He was only denied that year’s title by Lewis Hamilton’s dramatic pass of Timo Glock’s Toyota on the last corner of the Brazilian GP.

1982 Didier Pironi controversially ignored signs from the Ferrari pit-wall to “SLOW” to deny team-mate Gilles Villeneuve in the San Marino Grand Prix (pictured, below). Only 14 cars turned up when the majority of the FOCA teams boycotted amid the ‘water cooled’ brakes dispute. However, the race appeared to be a classic to those in the grandstands. Renault locked out the front row in qualifying and René Arnoux enjoyed a great race with the Ferraris before retiring. Michele Alboreto finished third for Tyrrell, the team racing because it had a new Italian sponsor for that race.

2001 Popular veteran Michele Alboreto was killed at the Lausitzring while testing an Audi R8 in preparation for the Le Mans 24 Hours. Alboreto was a five-time Grand Prix winner who challenged Alain Prost for the 1985 championship during his five seasons with Ferrari. He retired from Formula 1 at the end of 1994 and subsequently won the 1997 Le Mans 24 Hours. 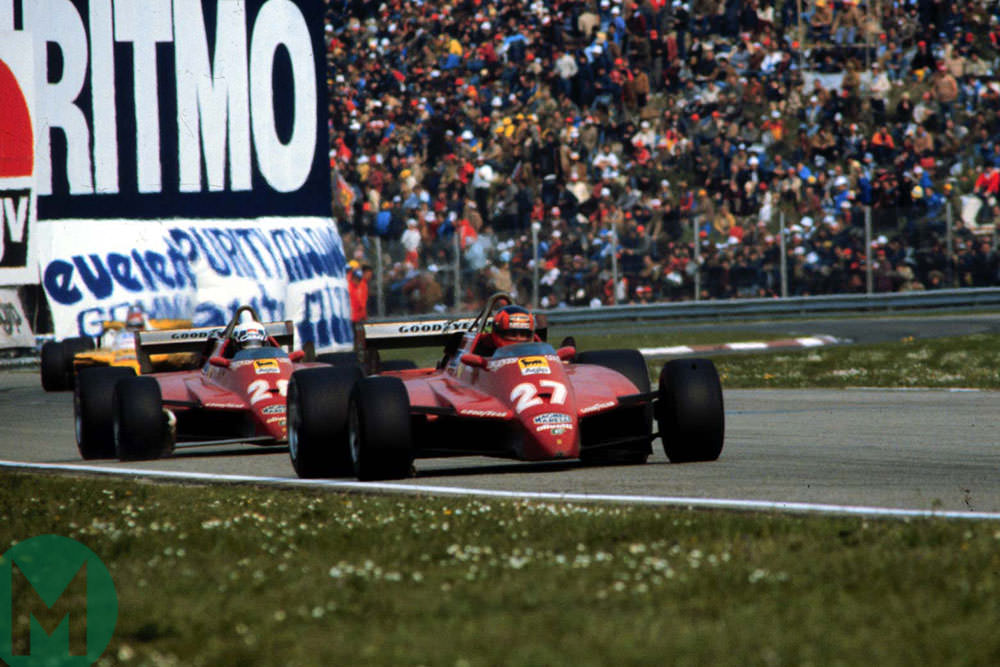 1937 Jean-Pierre Beltoise was born 81 years ago. The Parisian started 86 Grands Prix during his career with Matra, Tyrrell and, most famously, BRM. The highlight was the 1972 Monaco Grand Prix when he scored a dominant victory in one of the wettest races in championship history. He died in January 2015.

1970 Chris Amon may not have won a World Championship Grand Prix but he counted two non-championship Formula 1 races among his victories. His breakthrough came in the 1970 International Trophy at Silverstone where his works March 701-Ford defeated the similar Tyrrell entry of Jackie Stewart on aggregate. Amon qualified on pole position and won heat one before Stewart, who had triumphed in the previous week’s Spanish GP, led the second race from start to finish. Amon made sure of outright victory by shadowing the World Champion to the finish.