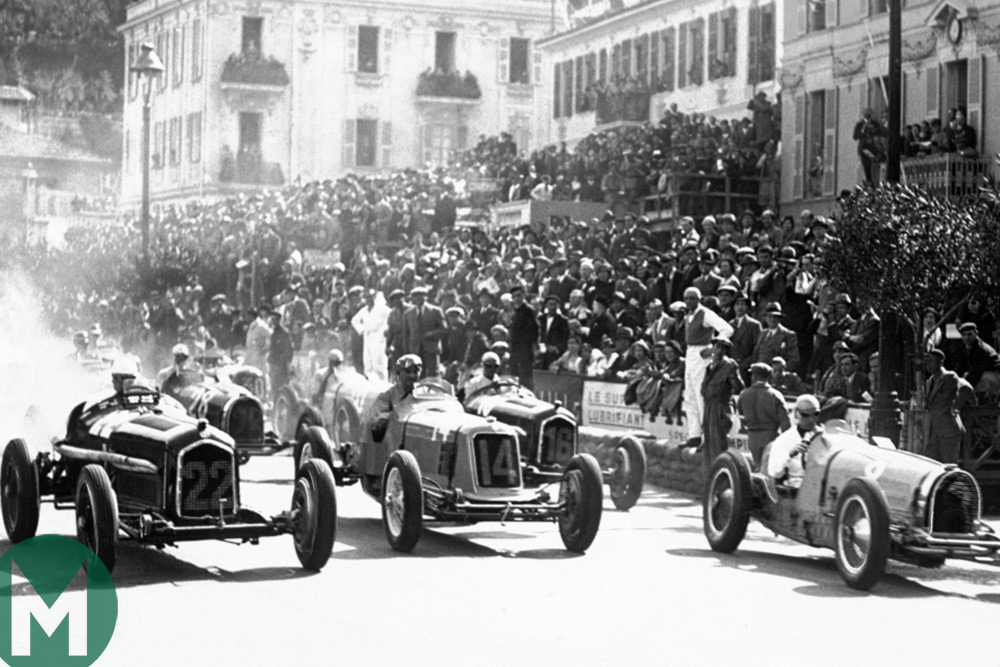 1908 Count Carlo Felice Trossi was born in his ancestral castle in Biella 110 years ago. The first President of Scuderia Ferrari when it was formed in 1929, Trossi was an Anglophile who completed his education at Leeds University. Whilst not from the top drawer as a driver, he won the 1947 Italian and 1948 Swiss Grands Prix for Alfa Romeo before he succumbed to cancer in 1949.

1975 The 1975 Spanish Grand Prix was a sad affair that started with a driver boycott and ended in tragedy. Practice was interrupted by protests about the unsafe Armco barriers around Montjuich Park’s picturesque street circuit but the race went ahead nonetheless. Rolf Stommelen’s Hill was in the lead of a Grand Prix for the first time when his rear wing support failed on lap 25 and five onlookers were killed in the resulting accident. The race was stopped with Jochen Mass declared the winner and half points awarded

1974 Niki Lauda scored his breakthrough victory at Járama 44 years ago. It was also Ferrari’s first success since the 1972 German Grand Prix. Lauda qualified on pole position for a second successive race but lost out to Ronnie Peterson (Lotus) at the start. On a drying track, Lauda assumed control once the leaders changed to slicks and he beat team-mate Clay Regazzoni by 35.61sec. Lotus were delayed by slow pitstops and both Peterson and Jacky Ickx retired.

1991 Ayrton Senna led Gerhard Berger in a McLaren-Honda 1-2 at Imola in 1991. A heavy downpour moments before the start saw the Ferraris of Alain Prost and Jean Alesi spin off on the parade lap and lap three respectively. Riccardo Patrese’s Williams-Renault led the opening nine laps but retired and it was J.J.Lehto (Dallara-Judd) and Pierluigi Martini (Minardi-Ferrari) who came third and fourth, albeit a lap behind the McLarens.

1996 Jacques Villeneuve (Williams-Renault) led all the way to his first Grand Prix victory, although it was no easy victory. Team-mate Damon Hill qualified on pole position but both he and Michael Schumacher made relatively slow getaways. In search of his first win for Ferrari, Schumacher was up to second by lap 26 and he caught Villeneuve with 15 laps to go. Villeneuve was baulked by backmarkers two laps from the finish but, try as he might, Schumacher could not pass and the Canadian rookie prevailed by 0.762sec. Half a minute later, less than a second covered David Coulthard (McLaren-Mercedes), Hill and Rubens Barrichello (Jordan-Peugeot) at the finish. 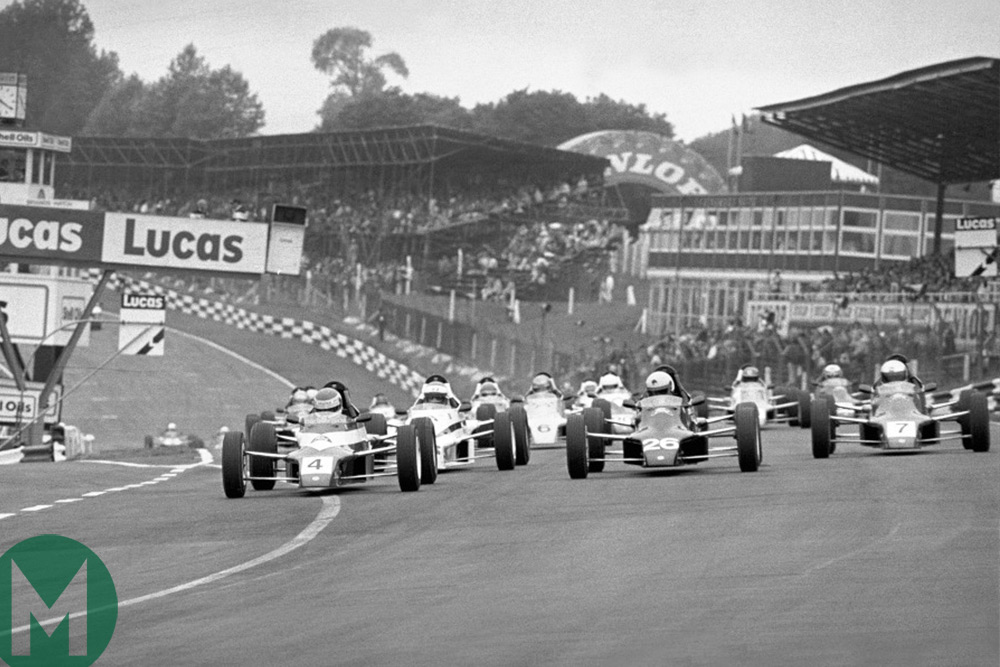 1951 Seven-time NASCAR Champion Dale Earnhardt was born in Kannapolis, North Carolina. ‘The Intimidator’ won 76 Cup races during his 25 years in stock car racing’s top division. He won the Daytona 500 in 1998 but was killed in an innocuous-looking accident during that same race three years later.

2002 Rob Walker, perhaps Formula 1’s greatest privateer, died in 2002. He raced as an amateur before World War II and finished eighth in the 1939 Le Mans 24 Hours. Walker first entered a World Championship Grand Prix in 1953 and Stirling Moss and Maurice Trintignant won the opening two GPs of 1958. Moss won another six GPs in Walker’s navy blue-and-white colours, including famous victories in Monaco in 1960 and 1961. Jo Siffert won the 1968 British GP before Walker disbanded his team at the end of 1970.

1920 Duncan Hamilton was born in Cork in 1920. This imposing figure started five World Championship Grands Prix but is best known for his victory for Jaguar in the 1953 Le Mans 24 Hours and the classic car company he founded. Hamilton and regular co-driver Tony Rolt returned to Le Mans to finish second in 1954 and he included five top six finishes in his nine appearances in the race. He retired from racing in 1959 and died in Dorset in 1994.

1994 The 1994 San Marino Grand Prix will always be remembered as one of Formula 1’s most tragic weekends. The 33-year-old Roland Ratzenberger was a popular addition to F1 when he finally graduated at the start of that season – he had won the 1986 Formula Ford Festival (above) before sporadic success in Formula 3 and Japanese racing led to his opportunity with Simtek. He had finished 11th on his debut at the Pacific GP but was killed during qualifying at Imola. A sombre weekend continued with Ayrton Senna’s fatal accident on the following day.

1884 Racing driver and motor sport administrator Earl Howe was born in Mayfair. He had already served in World War I and as a Member of Parliament when the 44-year-old nobleman first raced seriously in 1928. He shared the winning Alfa Romeo 8C with Tim Birkin in the 1931 Le Mans 24 Hours – a victory that drew a congratulatory message from Benito Mussolini for their “victory for Italy”. Howe was President of the British Racing Drivers’ Club from 1929 until his death in 1964.

1955 Stirling Moss won the 1955 Mille Miglia for Mercedes-Benz with Motor Sport’s Continental Correspondent Denis Jenkinson reading the carefully prepared roller notes. They survived a couple of brushes with the straw bales that marked some corners to lead when they entered Rome. Another spin on the climb to the Radicofani pass almost ended in a ditch but Moss continued on to Brescia and a famous victory. Juan Manuel Fangio’s 300SLR finished second to complete a Mercedes 1-2.

1983 Patrick Tambay won the San Marino Grand Prix in Ferrari number 27 less than a year after the death of Gilles Villeneuve. Riccardo Patrese appeared on course to deny that popular result but he lost the lead by overshooting his pit box when he stopped for fuel. Patrese charged back onto Tambay’s tail and retook the lead with less than six laps to go only to crash immediately at Acqua Minerali.

1994 The terrible San Marino Grand Prix weekend, that had already claimed the life of Roland Ratzenberger, concluded with Ayrton Senna’s fatal accident. The triple World Champion had qualified his Williams-Renault on pole position and was leading the race when he crashed at Tamburello. Michael Schumacher (Benetton-Ford) won the restarted race with Nicola Larini second for Ferrari but those were mere details on a black weekend for the sport. 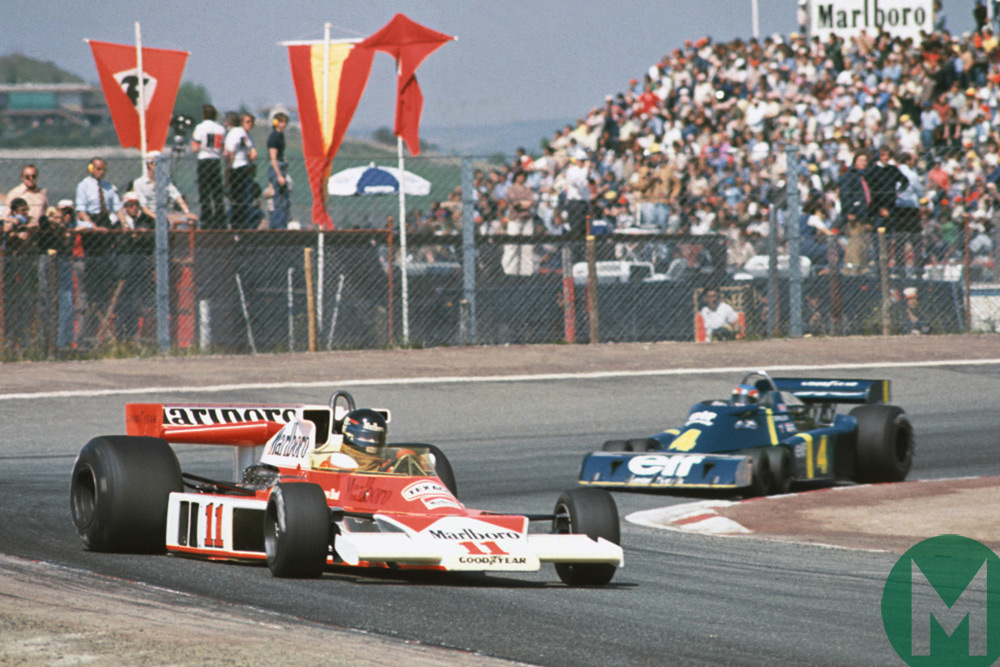 1976 Ferrari had won all three races in 1976 when the Formula 1 circus arrived at Járama for the Spanish Grand Prix. James Hunt’s McLaren qualified on pole position but it was championship leader Niki Lauda, nursing a broken rib sustained in a tractor accident, who narrowly led the first 32 laps. Both Hunt and team-mate Jochen Mass eventually overtook Lauda although the German’s engine expired with 10 laps to go. Hunt duly beat Lauda by 30.97sec but his McLaren was originally disqualified for being too wide. That decision was finally overturned on appeal two months later. Patrick Depailler qualified third on the debut of the six-wheel Tyrrell P34 and both Alan Jones and Tony Brise made their first F1 starts in this race.

1986 29-year-old Henri Toivonen was killed on the Tour de Corse. The son of former European Champion Pauli, the younger Toivonen initially held single-seater ambitions but switched to rallying when the money ran out. His World Championship breakthrough came when he won the 1980 RAC Rally for Talbot and he repeated that success in 1985 when driving for Lancia. Winner of the following year’s Monte Carlo Rally, Toivonen’s death robbed the sport of one of its most promising stars.

1924 Legendary Formula 1 team owner Ken Tyrrell was born in East Horsley in 1924. It was with Jackie Stewart as his lead driver that Tyrrell enjoyed his greatest days – winning the World Championship in 1969 (as Matra International), 1971 and 1973. François Cevert, Jody Scheckter, Patrick Depailler and Michele Alboreto all won races for the team but it gradually fell into decline. He eventually sold and it was re-branded as British American Racing in 1999. Ken Tyrrell died in 2001.