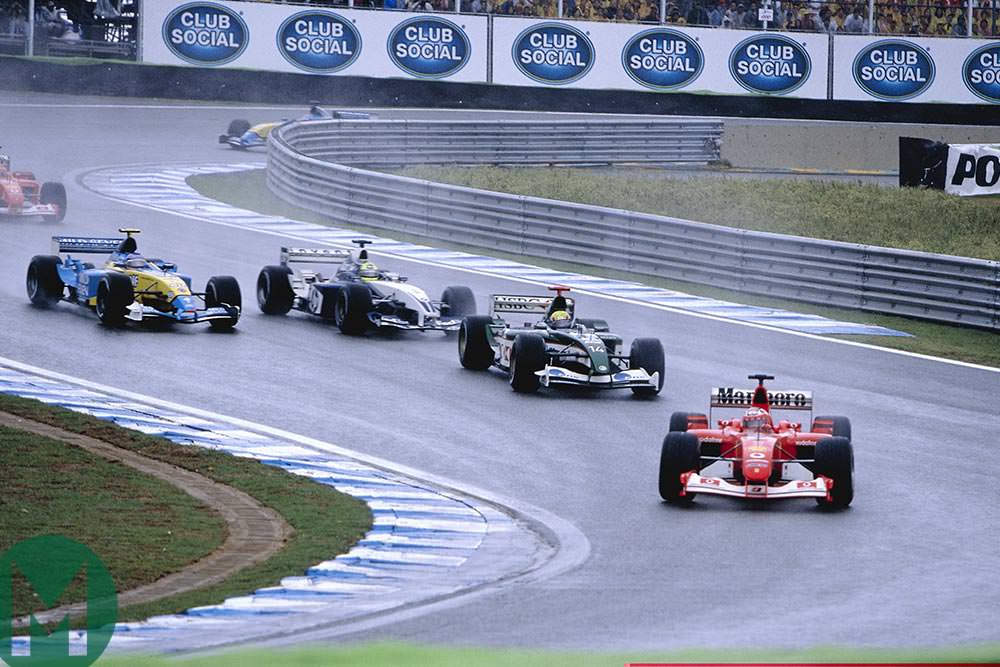 1909 Pre-war titan Hermann Lang was born near Stuttgart and he joined Mercedes-Benz as a mechanic as it prepared to return to Grand Prix racing in 1934. Lang was chosen as a reserve driver following a test at the start of 1935 and soon became a full member of the team. He scored consecutive victories at Tripoli from 1937-39 and won the Belgian and Swiss Grands Prix during 1939. He returned to racing after World War II and won the 1952 Le Mans 24 Hours.

1952 The first Formula 1 race of 1952, the Valentino Grand Prix, was a non-championship race that would have a great baring on the next two seasons. Ferrari was the only works team to arrive at Turin’s parkland circuit for Alfa Romeo had withdrawn and BRM scratched its three-car entry. Luigi Villoresi led a Ferrari 1-2-3-4-5 with no significant opposition. The World Championship organisers took heed of the Valentino GP grid and switched to Formula 2 rules for 1952 and 1953 rather than risk a series of undersubscribed, one-sided processions.

2003 The 700th race to count towards the World Championship was a chaotic affair that was only settled a week later. Heavy rain and accidents triggered four safety car periods and Rubens Barrichello and David Coulthard both led before Fernando Alonso crashed into Mark Webber’s wrecked Jaguar. The race was stopped with Kimi Räikkönen’s McLaren initially declared the winner. Jordan protested and Giancarlo Fisichella was found to have started an all-important 56th lap just six seconds before the red flag and so was leading at the crucial moment. Winner for the first time, Fisichella received his trophy two weeks later at Imola.

1968 Jim Clark was killed at Hockenheim during the Formula 2 Deutschland Trophy 50 years ago. The 32-year-old was the sport’s greatest star at the time and his death was mourned around the world. World Champion in 1963 and 1965, he had won a then-record 25 Grands Prix as well as the 1965 Indianapolis 500.

Related: All of this week’s Jim Clark features

1974 33,000 spectators watched James Hunt score Hesketh’s first Formula 1 victory in the International Trophy at Silverstone. He was 1.7sec quicker than anyone in practice and made a poor start from pole position. Jochen Mass led the opening lap for Surtees but Ronnie Peterson’s Lotus was soon through. The recovering Hunt made light work of the midfield and was on Peterson’s tail by half distance. He took the lead as they entered Woodcote for the 28th time and eased to a popular home win. Peterson, who had suffered lurid oversteer throughout, retired with engine failure.

1973  Jackie Stewart won a dramatic International Trophy at a wintery Silverstone despite spinning out of an early lead. That left Peterson’s Lotus 72-Ford on course for his maiden Formula 1 victory until an untimely snowstorm. He spun at Becketts and Stewart, who had stormed back from sixth to second, was through by the time he had recovered. Emerson Fittipaldi qualified the sister Lotus in pole position but blew his engine at the start.

1979  Gilles Villeneuve qualified on pole position and led all the way to victory in the 1979 Long Beach Grand Prix. Jody Scheckter damaged his front wing at the start but passed the Tyrrell of Jean-Pierre Jarier and Patrick Depailler’s Ligier to complete a second successive Ferrari 1-2. Alan Jones drove a fine race in the nimble Williams FW09-Ford to finish in a promising third position. 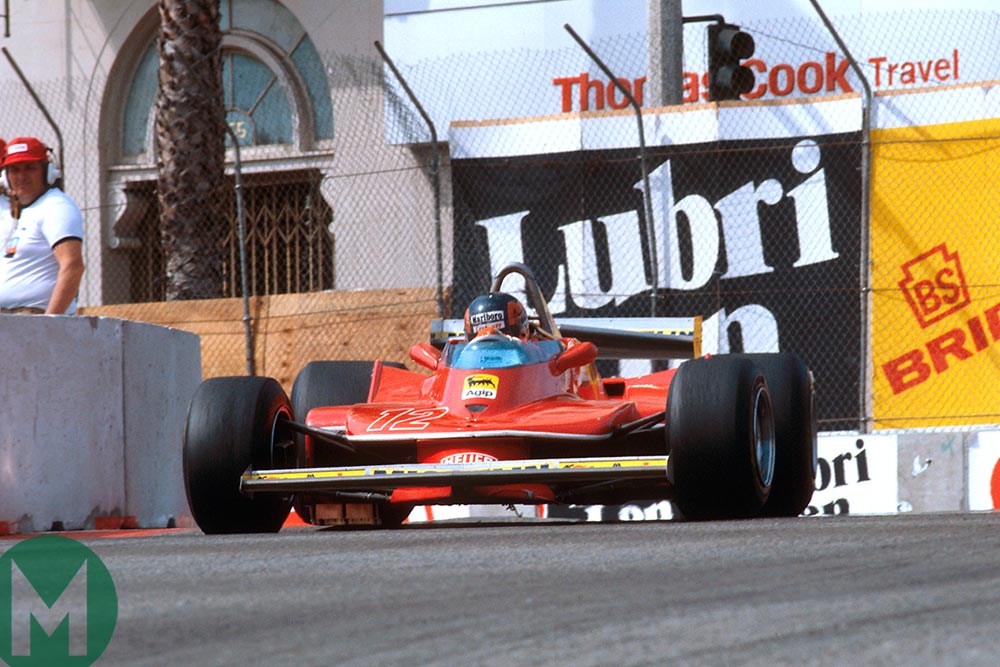 1971 1997 World Champion Jacques Villeneuve was born in St-Jean-sur-Richelieu, Quebec. The son of Ferrari legend Gilles, Villeneuve came to the fore by winning the Indianapolis 500 and IndyCar World Series in 1995. He graduated to Formula 1 a year later with Williams and started his debut in Australia from pole position. He pushed team-mate Damon Hill for the title until the final race and was crowned World Champion at the second attempt after the tense 1997 European Grand Prix at Jerez. It seemed impossible at that point that Villeneuve would not win another GP.

1929 Mike Hawthorn, Britain’s first world champion, was born in Yorkshire. The “Farnham flyer” won three Grands Prix for Ferrari during the 1950s and snatched the 1958 title at the final race despite Stirling Moss winning four races to his one. Hawthorn immediately retired from the sport and was killed in a road accident in January.

1983 The last non-championship Formula 1 race to be held was the 1983 Race of Champions at Brands Hatch. The entry may have been disappointing but it proved “an enjoyable event” according to Motor Sport. World Champion Keke Rosberg (Williams-Ford) qualified on pole position with the sole Ferrari of René Arnoux alongside. The Frenchman led for six laps before his tyres degraded and Rosberg assumed control. All was not well with the Finn’s tyres either and Danny Sullivan, driving the best race of his short F1 career closed in for an unlikely win. Rosberg just held on to beat Sullivan’s Tyrrell by 0.490sec. Alan Jones was third on his second and final appearance for Arrows.

1976 James Hunt won the International Trophy for the second time in three years, the famous non-championship race named in honour of the lamented Graham Hill this year. Hunt dominated the meeting by qualifying on pole position and leading all the way to victory. Vittorio Brambilla chased the McLaren during the early laps and finished second – 11.24sec behind at the flag. Jody Scheckter was third and 1.41sec covered fourth to sixth but it had been a processional race. Bette Hill was on hand to present the Graham Hill Trophy to England’s new hero.

1993 Circuit owner Tom Wheatcroft finally realised his ambition when Donington Park held a round of the Formula 1 World Championship. The 1993 European Grand Prix is best remembered for rain showers and the mastery of Ayrton Senna. No match for the Williams-Renaults in the dry, Senna’s McLaren-Ford passed four cars on the opening lap and lapped everyone bar Damon Hill on the way to a famous victory. Alain Prost made seven pitstops as the conditions changed but still finished third. Rubens Barrichello’s Jordan-Hart ran third in the closing stages before retiring. 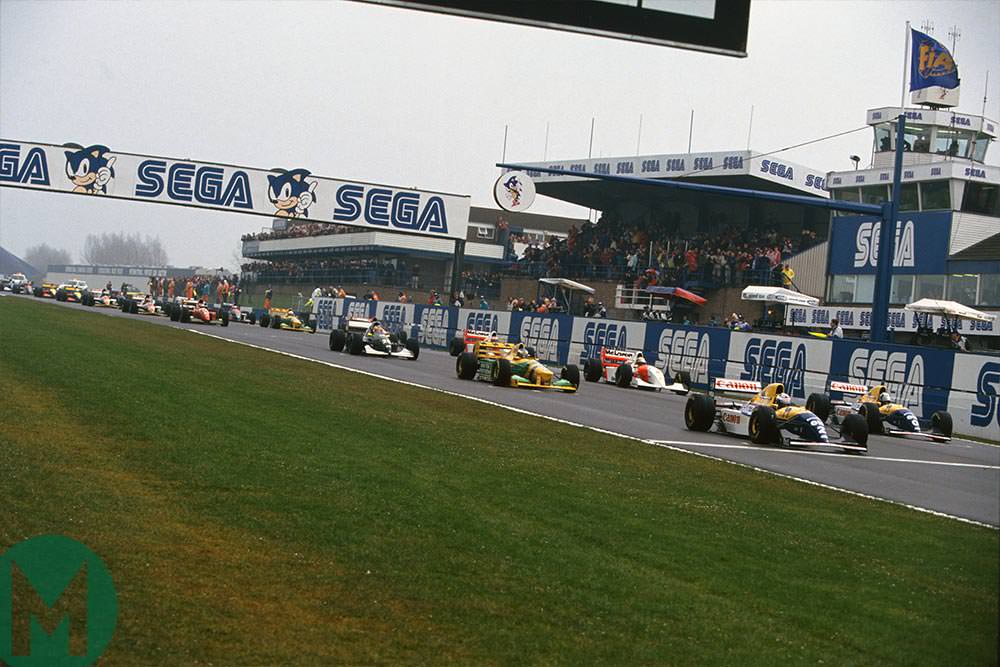 1942 Argentinian Formula 1 star Carlos Reutemann was born 75 years ago. “The new Fangio” won 12 Grands Prix but ultimately missed out on the world title or home win he craved. The closest he came to the former was in 1981 when a strangely lacklustre drive in the Las Vegas finale handed Nelson Piquet the title by a single point. His nine championship Argentine GPs (he also finished third in the non-championship race in 1971) were generally met with hysteria in the grandstands. He qualified for his World Championship debut in the 1972 race in pole position and he was two laps from victory in 1974 when a lead came loose.

1962  Formula 1 driver and double Le Mans winner Ron Flockhart lost his life in an airplane accident in 1962. Thirteen Grand Prix starts included finishing third in the 1956 Italian GP for Connaught and his Ecurie Ecosse Jaguar D-tyre scored back-to-back victories in the Le Mans 24 Hours that year and the next. Flockhart was attempting to set a record time flying between Sydney and London when he crashed near Melbourne in 1962.

1970 Pedro Rodríguez was imperious during the 1970 BOAC 1000Kms at a very wet Brands Hatch. The Mexican dominated before handing over the Gulf/John Wyer Porsche 917K to Leo Kinnunen and they finished five laps clear in a 1-2-3 for the Stuttgart marque. Ferraris qualified first and second but endured a troubled race.