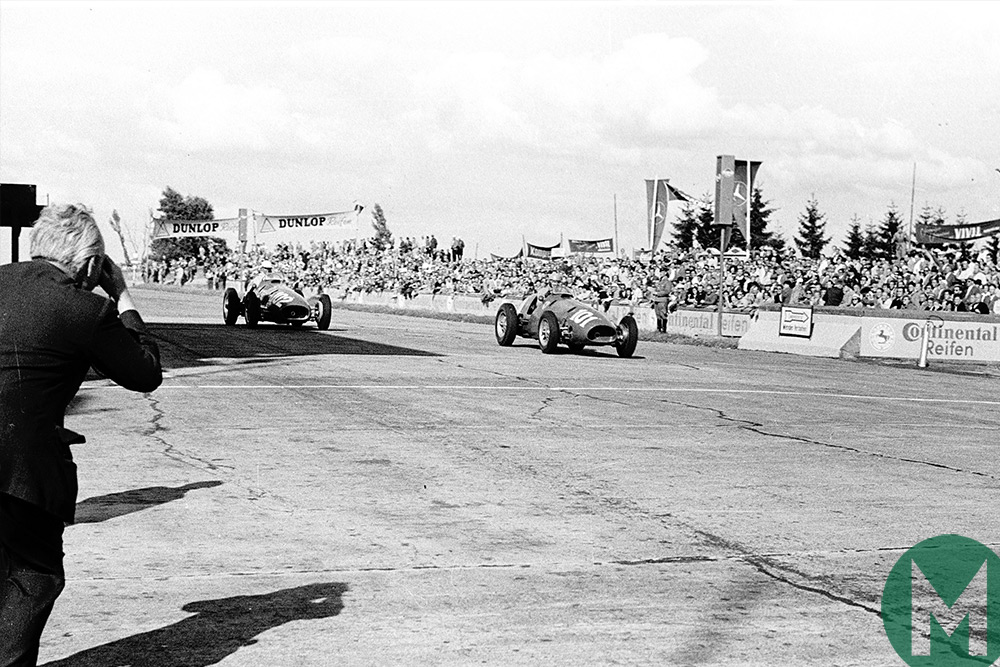 1952 Alberto Ascari utterly dominated 1952 and victory in that year’s German Grand Prix clinched his first world title. His fourth win in a row seemed in doubt when he pitted with two laps to go to replenish oil but he re-passed team-mate Giuseppe Farina to win by 14.1sec. Ferraris finished 1-2-3-4 with Jean Behra fifth for Gordini.

1958 The 1958 German Grand Prix was a tragic affair, for Peter Collins was killed when he crashed while chasing Tony Brooks’ Vanwall for the lead on lap 11. Ferrari team-mate and close friend Mike Hawthorn retired a lap later, leaving Brooks to drive unopposed to victory. The lead Vanwall of Stirling Moss had retired early so the Cooper-Climaxes of Roy Salvadori and Maurice Trintignant completed the top three on a joyless day.

2008 Ten years ago, McLaren’s Heikki Kovalainen was the beneficiary when Felipe Massa’s Ferrari engine failed with three laps of the Hungarian Grand Prix to go. It was Kovalainen’s only Formula 1 victory. Team-mate Lewis Hamilton qualified on pole position but suffered a puncture and finished fifth.  Toyota’s Timo Glock scored his first podium finish in second, with Kimi Räikkönen third for Ferrari.

1957 The 1957 German Grand Prix was a special day for Juan Manuel Fangio. The reigning champion qualified his Maserati 250F on pole position and pitted from the lead to refuel after 11 laps. The stop took an eternity and Fangio was almost a minute behind the non-stopping Lancia-Ferraris of Mike Hawthorn and Peter Collins when he resumed. He lapped at record pace to close on the leaders. He passed both Englishmen with a lap to go to win a World Championship GP for the last time and clinch his fifth world title.

1968 The 1968 German Grand Prix was run at a soaked Nürburgring with Jackie Stewart scoring perhaps his finest victories (pictured below). Still troubled by a wrist injury sustained in a Formula 2 race at Járama, Stewart qualified sixth but took the lead on the opening lap of the Nordschleife and dominated thereafter. His Matra-Ford beat Graham Hill by over four minutes to close to within four points of the Lotus driver. The Ferraris of Jacky Ickx and Chris Amon had qualified 1-2.

1985 Michele Alboreto (Ferrari) came from eighth on the grid to win the 1985 German Grand Prix at the new Nürburgring after he barged passed Keke Rosberg’s Williams-Honda and Alain Prost spun his McLaren-TAG. Teo Fabi had qualified a Toleman-Hart on pole position for the first time for what was an important race in the history of Formula 1 broadcasting: François Hesnault drove a third Renault that carried a Thomson on-board camera and footage was included in the live feed for the first time. 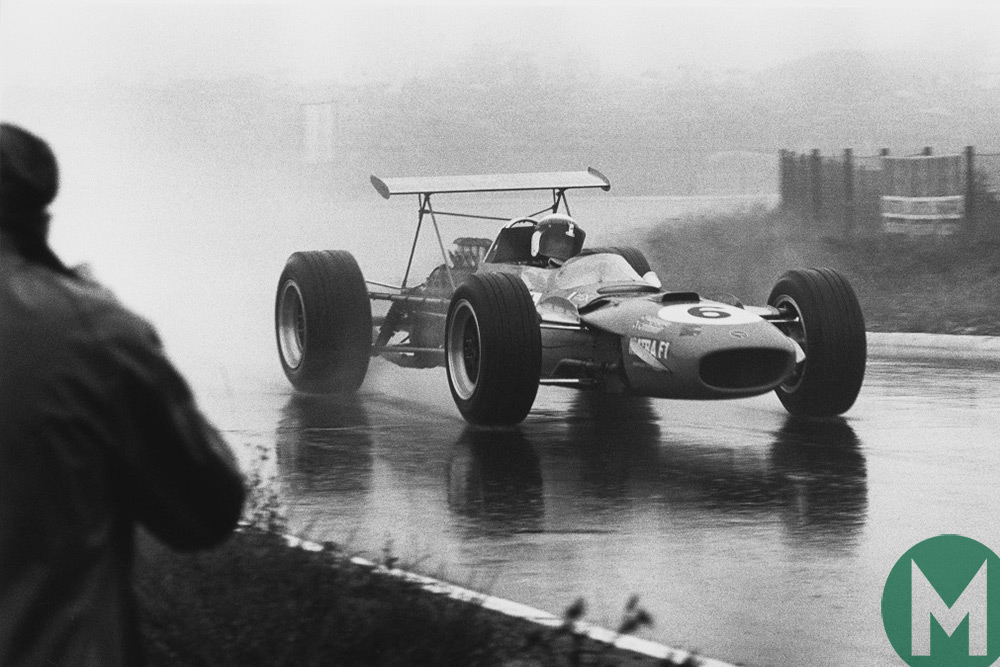 1930 One-time Grand Prix winner Richie Ginther was born in Hollywood in 1930. Phil Hill’s riding mechanic in the 1953 and 1954 Carrera Panamericana, he raced at Le Mans for the first time in 1957 and turned professional in 1960, joining Ferrari and second in that year’s Italian GP. Fifth in the 1961 World Championship, he raced for BRM for three seasons from 1962 and finished as runner-up with team-mate Graham Hill in 1963. He moved to Honda in 1965 and won the Mexican GP – a first for manufacturer and Goodyear tyres as well. He retired from racing in 1967 and died while on holiday in France in 1989.

1968 Rally legend Colin McRae was born 50 years ago on this day in Lanarkshire. The son of five-time British champion Jimmy McRae, the second-generation star scored 25 WRC wins for Subaru and Ford, and became Britain’s first World Rally Champion when crowned in 1995. He started a World Championship event for the last time in 2006 but was killed in September 2007 along with his son and two family friends in a helicopter accident near his home.

1924 The Brooklands Gazette as launched on this day in 1924 as “the only Organ devoted entirely to the Sport of Motor Car and Motor Cycle Racing and Competitions.” The monthly magazine was renamed Motor Sport in August 1925.

1961 Stirling Moss scored the final Grand Prix victory of his career, at the Nürburgring on this day in 1961. Run in changeable conditions, Moss’s Rob Walker-entered Lotus 18/21-Climax took the lead on the opening lap of the German GP and was 20 seconds clear of the battling shark-nose Ferraris at the finish. Wolfgang von Trips passed Phil Hill on the last lap to snatch second-place. Jack Brabham gave the new Climax V8 its debut – qualifying on the front row and leading before he crashed on the opening lap.

2006 The Hungarian Grand Prix is normally run in baking hot conditions but it rained for the 2006 race. Pole-winner Kimi Räikkönen (McLaren-Mercedes) established a commanding lead before pitting and his challenge was ended when he crashed into Tonio Liuzzi’s Toro Rosso on lap 26. Fernando Alonso’s Renault lost when a wheel was not attached correctly when he pitted for slicks. Jenson Button had started 14th but his Honda was now in the lead. He completed the remaining 18 laps to score his first F1 victory with Pedro de la Rosa (McLaren-Mercedes) and Nick Heidfeld (BMW Sauber) second and third respectively. 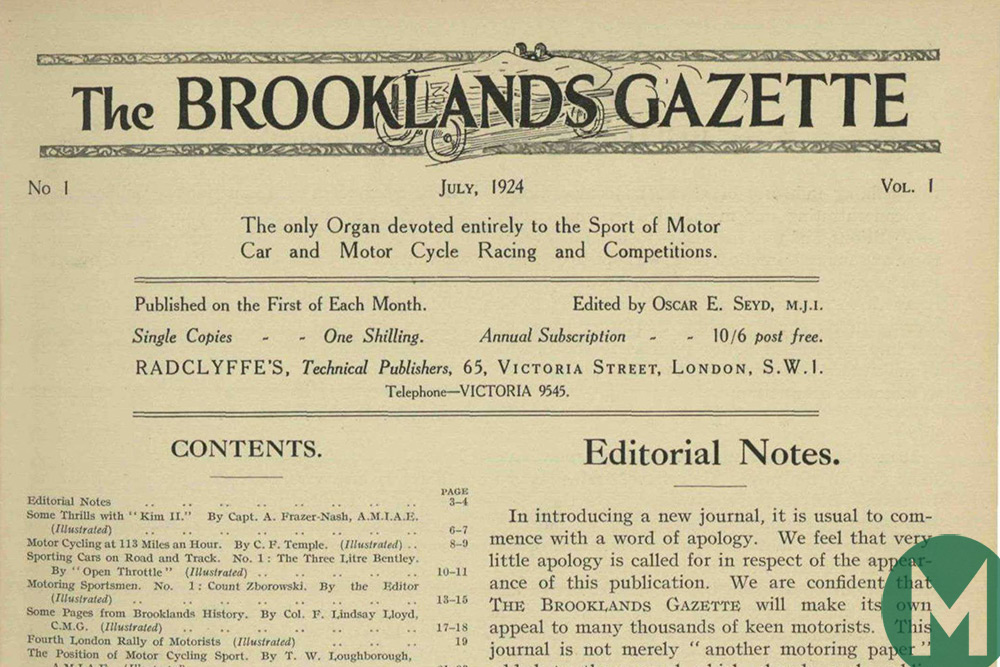 1926 The first Grand Prix to be held in Britain took place at Brooklands on this day in 1926. The event was held on an anticlockwise course with chicanes inserted on the starting straight. Nine cars lined-up for the start and the Talbots of Albert Divo and Henry Segrave led before Robert Benoist’s Delage took control. The Frenchman was slowed by a broken exhaust so team-mates Robert Sénéchal and relief driver Louis Wagner won, beating local hero Malcolm Campbell’s Bugatti by ten minutes.

1982 Championship leader Didier Pironi had already secured pole position for the 1982 German Grand Prix by almost a second when he crashed into the back of Alain Prost’s Renault as rain fell during Saturday practice. The Ferrari somersaulted three times before hitting the barrier and it took half-an-hour to cut Pironi free. He was taken to hospital in Heidelberg with a broken arm and fractured legs and did not race in Formula 1 again.

1904 Italian star Achille Varzi was born near Milan on this day in 1904 Tazio Nuvolari great rival in the late-1920s and early-1930s, Varzi won the 1931 French Grand Prix and 1933 Monaco GP (Clip below) as well as the Targa Florio (twice) and Mille Miglia that decade. His fortunes faded after joining Auto Union in 1935 but he returned to racing after World War II with Alfa Romeo. He was killed during practice for the 1948 Swiss GP.

1953 1992 Formula 1 World Champion and 1993 Champ Car Champion Nigel Mansell celebrates his 65th birthday. One of the most spectacular drivers of his generation, Mansell won 31 of his 187 Grand Prix starts in a career that included spells with Lotus, Williams, Ferrari and McLaren. Having just won the World Championship in 1992, Mansell defected to the Champ Car World Series with Newman-Haas Racing and won that title at the first attempt.

1982 The day after championship leader Didier Pironi was seriously injured during practice, Ferrari team-mate Patrick Tambay lifted the gloom a little by scoring a popular maiden Grand Prix victory at Hockenheim. Nelson Piquet’s light-fueled Brabham-BMW was securely ahead when his crashed into Eliseo Salazar’s ATS while lapping the Chilean. The reigning champion then proceeded to attack the backmarker live on television, such was the frustration of losing the German GP. René Arnoux was second for Renault but McLaren’s John Watson lost a crucial podium finish when his suspension broke.