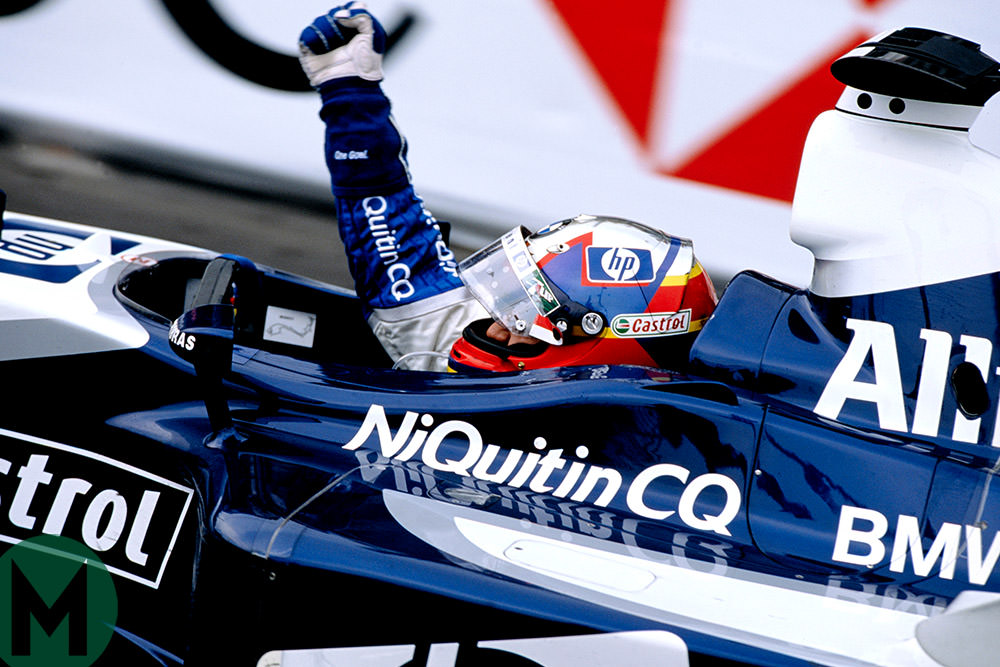 1947 Former McLaren Formula 1 team principal Ron Dennis was born on this day in 1947. He worked for the Cooper and Brabham Formula 1 teams before running his own successful F2 teams during the 1970s and 1980s. Dennis’s Project Four Racing hired John Barnard with the intention of graduating to F1 but instead Dennis negotiated a Marlboro-funded merger with the struggling McLaren team in 1980. That prompted an era of rare domination with Niki Lauda, Alain Prost and Ayrton Senna winning seven drivers’ titles in eight years during the ‘80s and ‘90s. Mika Häkkinen was World Champion in 1998 and 1999 and Lewis Hamilton delivered the team’s most recent success 10 years ago.

1959 Grand Prix driver and leading television commentator Martin Brundle was born in 1959. He started 158 GPs from his debut in 1984 with second in the 1992 Italian and 1994 Monaco GPs his best results for Benetton and McLaren respectively. 1988 World Sports-Prototype Champion for Jaguar, Brundle won the Le Mans 24 Hours two years later also driving for the marque. He retired from F1 at the end of 1996 to join ITV television’s F1 commentary team and has since worked for the BBC and Sky Sports.

1986 The 1986 Le Mans 24 Hours was marred by the death of Jo Gartner during the early hours of Sunday morning. His Kremer Brothers Porsche crashed on the Mulsanne Straight when travelling at almost 200mph and the popular Austrian was killed instantly. Derek Bell shared the winning works Porsche with Al Holbert and Hans-Joachim Stuck to become the most successful British driver in the race with four wins to that date.

2003 Juan Pablo Montoya (pictured, above) became the second man to win both the Indianapolis 500 and the Monaco Grand Prix with victory in the latter, emulating Graham Hill’s feat 31 years earlier although the Englishman also won the Le Mans 24 Hours. Montoya will make his debut at Le Mans this month. The so called “triple crown” has been a major talking point recently due to Fernando Alonso’s attempt to win last year’s Indy 500 and appearance at Le Mans this year. Montoya took the lead of the 2003 Monaco GP during the first pitstops before withstanding Kimi Raïkkönen’s pressure to score Williams’s first win in the Principality since 1983. 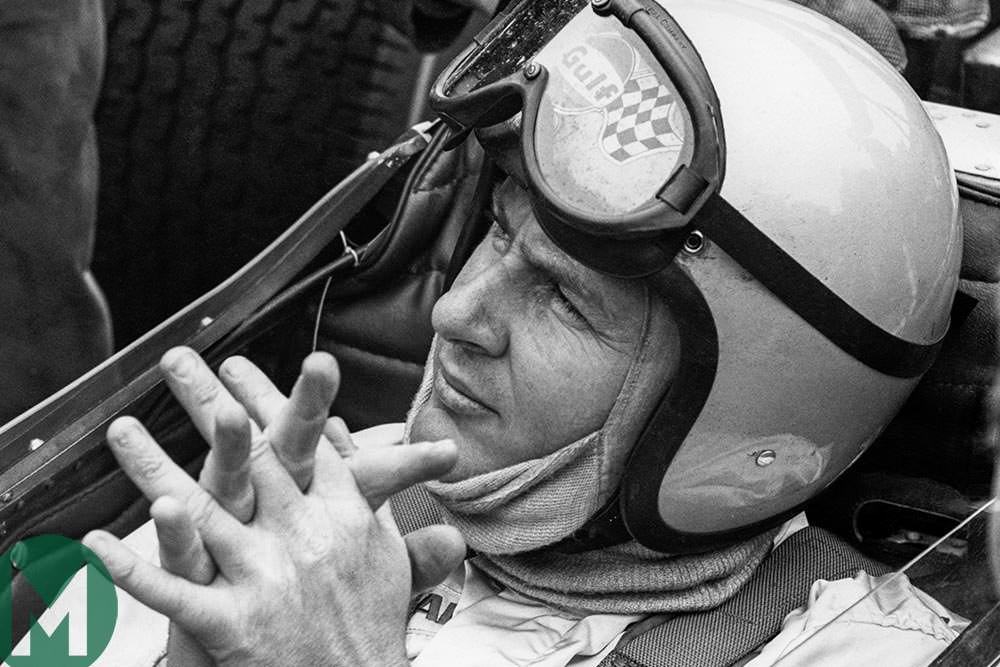 1923 Henry Segrave drove a Sunbeam to victory in the Grand Prix de l’Automobile Club de France at Tours on this day 95 years ago. It was the first success for a British driver in a major continental Grand Prix. He led the race a year later before being delayed and won the 1924 San Sebastian GP. His focus switched to the land speed record from 1926. The first man to average over 200mph, he was knighted in 1929 a year before losing his life in a Water Speed Record attempt on Lake Windermere.

1970 Bruce McLaren was killed as he tested a Can-Am car at Goodwood. Formula 1 runner-up in 1960 when driving for Cooper, his fourth and final Grand Prix victory (the 1968 Belgian GP) was also the first for the team that he founded. He won the 1966 Le Mans 24 Hours for Ford and was twice crowned Can-Am champion as McLaren-Chevrolets dominated the lucrative series.

1991 The end of the 1991 Canadian Grand Prix was a dramatic affair. Nigel Mansell (pictured, below) qualified on the front row in a Williams-Renault 1-2 and he led from the start, over a minute ahead of Nelson Piquet’s Benetton-Ford as he entered the final lap. Then, as he exited the last corner of the last lap, Mansell’s engine stalled and his car coasted to a halt. Piquet duly passed his stricken rival to score the 23rd and final victory of his Formula 1 career. Riccardo Patrese started from pole position but finished third after puncturing a tyre. Stefano Modena was second for Tyrrell and Jordan finished fourth and fifth. 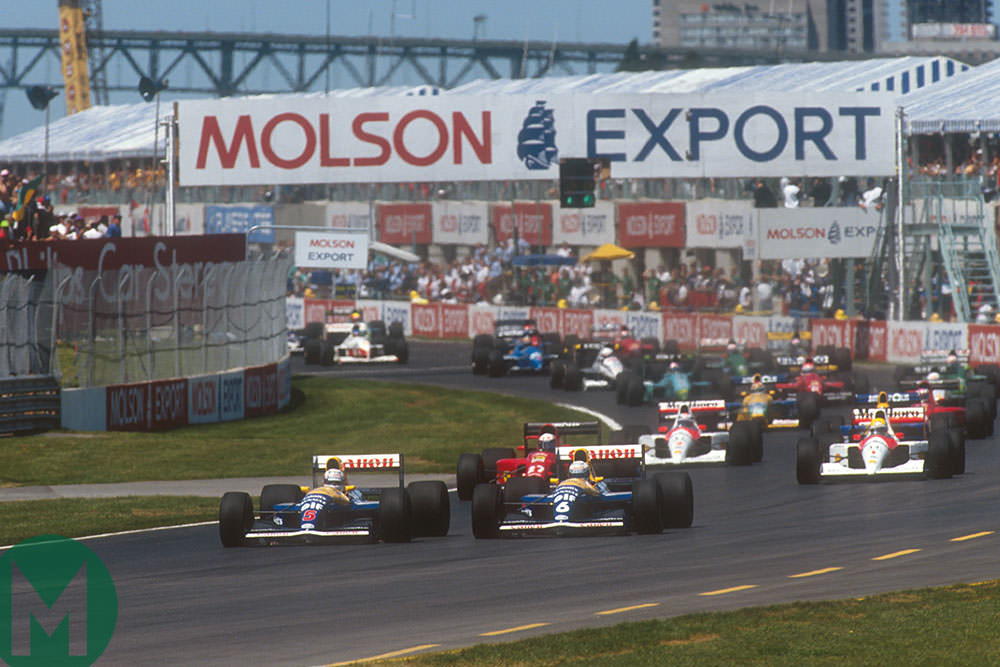 1956 Peter Collins scored his breakthrough F1 win in the Belgian Grand Prix, his third race since joining Ferrari. Spa-Francorchamps was wet at the start and Collins ran third in the early laps behind the Maserati of Stirling Moss and pole winner Juan Manuel Fangio. The world champion took the lead on after four laps and Moss shed a wheel to leave the Lancia-Ferraris running 1-2. When Fangio’s transmission failed on lap 24, Collins was left to ease to victory.

1984 Ayrton Senna (pictured, below) was denied a famous victory for Toleman when the 1984 Monaco Grand Prix was controversially stopped due to heavy rain. He was closing rapidly on Alain Prost’s McLaren-TAG when clerk-of-the-course Jacky Ickx decided the conditions were too dangerous to continue. Third on the road, Stefan Bellof’s Tyrrell was also closing on the top two at that time. Nigel Mansell started from the front row and passed Prost on lap 11 to lead a GP for the first time. The Lotus driver pulled away but hopes of a maiden victory were shattered when he crashed on the climb up to Casino Square. 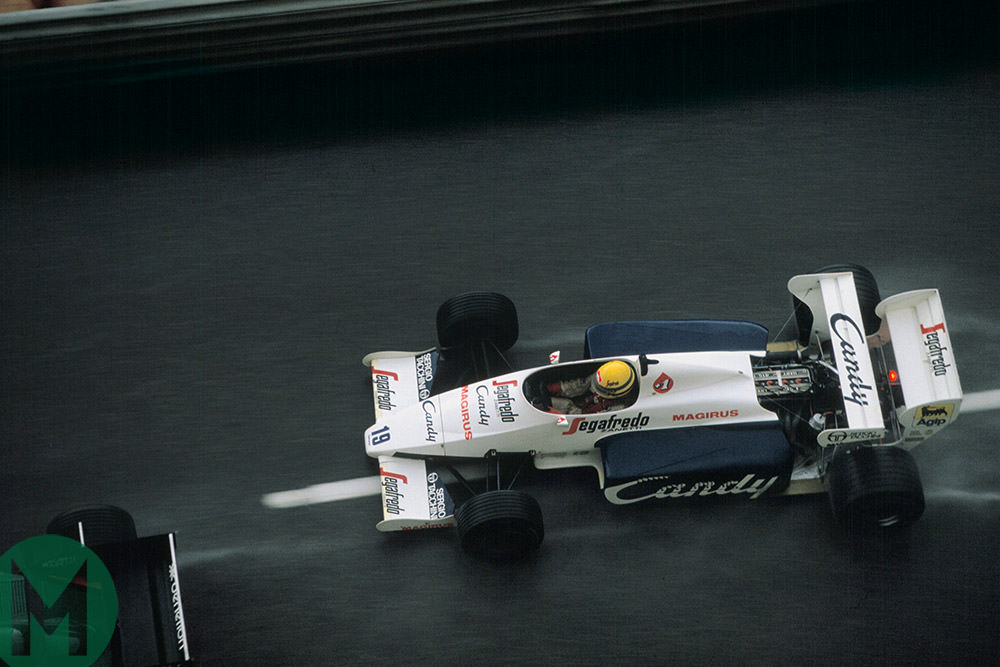 1967 The Ford-Cosworth DFV, the most successful engine in Formula 1 history, made its debut at Zandvoort on this day in 1967. Graham Hill’s new Lotus 49-Ford qualified on pole position and led with ease until the camshaft broke. Jim Clark had had a troubled practice in the sister car and only lined-up eighth on the grid. He charged through the field and passed world champion Jack Brabham for the lead on lap 16. Clark then reeled off the remaining 75 laps to score a famous victory.

1977 The 1977 Belgian Grand Prix was held at a wet Zolder on this day. Mario Andretti’s Lotus 78-Ford dominated qualifying and claimed pole position by 1.54sec. However, the American hit John Watson’s Brabham-Alfa on the opening lap so it was left to team-mate Gunnar Nilsson to save Lotus’ day by claiming his only GP win. It was a chaotic event and David Purley’s Lec briefly led as faster drivers changed tyres. Niki Lauda seemed in command but spun while trying to lap the Lec. Nilsson passed the Ferrari once the rain returned and won by 14.19sec. Ronnie Peterson was third in the six-wheel Tyrrell.

1983 Sixteen years and a day after Jim Clark scored the first victory for the Ford DFV, Michele Alboreto (below) won the Detroit Grand Prix with its development, the DFY. It was the 155th and last victory for the venerable old V8 and was also Tyrrell’s final Formula 1 success. René Arnoux’s Ferrari led before retiring and Nelson Piquet, like Alboreto running non-stop, lost the lead when he had to change a punctured a tyre. Ford engines filled five of the top six positions. 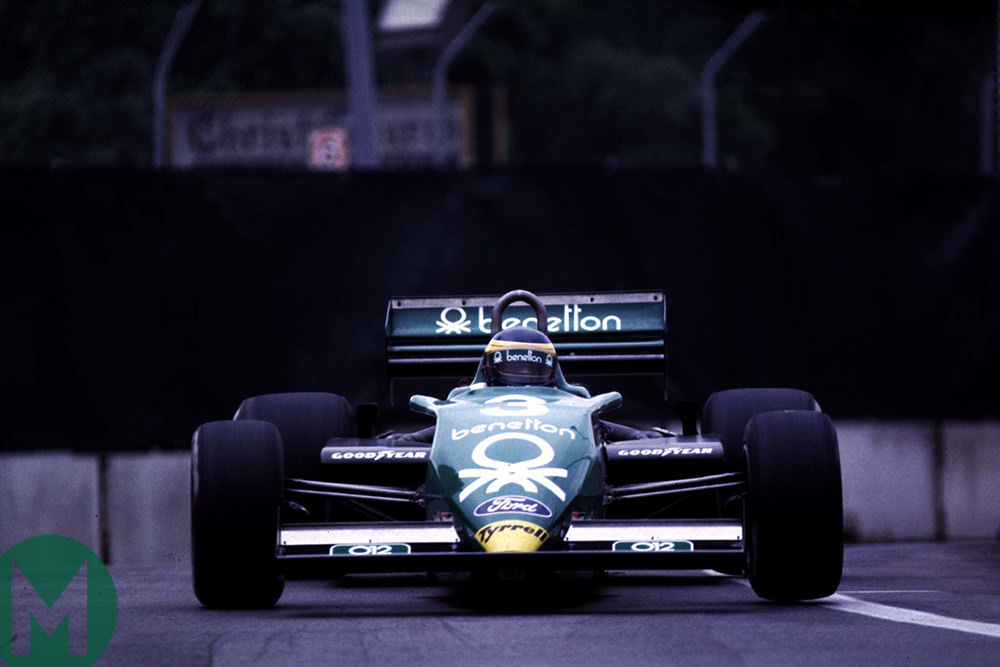 1960 Jack Brabham (Cooper-Climax) led all the way at Zandvoort to claim his first victory of the year. Stirling Moss initially gave chase but dropped to the back of the field when he punctured a tyre on lap 17. He then charged back through the field at record pace and just failed to take third from Graham Hill (BRM) on the last lap. Innes Ireland finished second on the day that Jim Clark made his World Championship debut as his Lotus team-mate.

1982 The first Detroit Grand Prix was held on the city’s streets on this day in 1982. John Watson only qualified his McLaren 17th but he charged through the field during the race. 13th when the race was stopped after six laps, the Ulsterman passed car-after-car with a series of precise overtaking manoeuvres, including taking three cars on lap 33 alone to move into take second-place. He then closed in on Keke Rosberg’s leading Williams before passing him on lap 37 to claim a breathtaking victory. 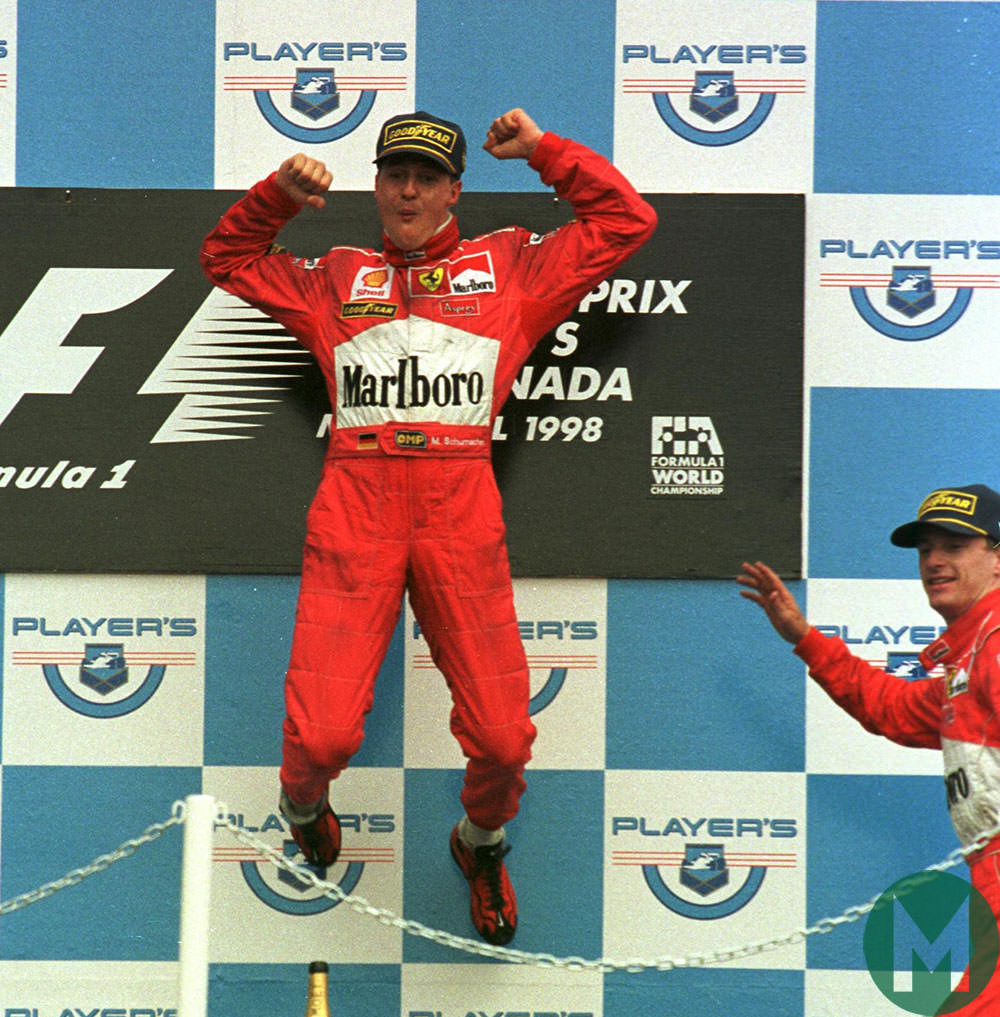 1970 Pedro Rodríguez scored the second victory of his Formula 1 career at Spa-Francorchamps in 1970. The March-Fords of Jackie Stewart and Chris Amon initially battled for the lead but Rodríguez’s BRM picked them off by lap five. The ever-unlucky Amon shadowed the Mexican for the rest of the race but could not find a way through – losing by 1.1sec. It was BRM’s first victory since 1966 and Rodríguez’s final F1 success. Stewart’s engine failed after 14 laps.

1998 Michael Schumacher (above) recovered from a stop-go penalty to win the Canadian Grand Prix 20 years ago today. That penalty was for barging Williams’s Heinz-Harald Frentzen off the road as Schumacher returned to the track after his first pitstop and Williams protested the result without success. The race was twice stopped by spectacular accidents at the start. The Benettons of Giancarlo Fisichella and Alex Wurz finished 2-4 with Schumacher’s Ferrari team-mate Eddie Irvine third.