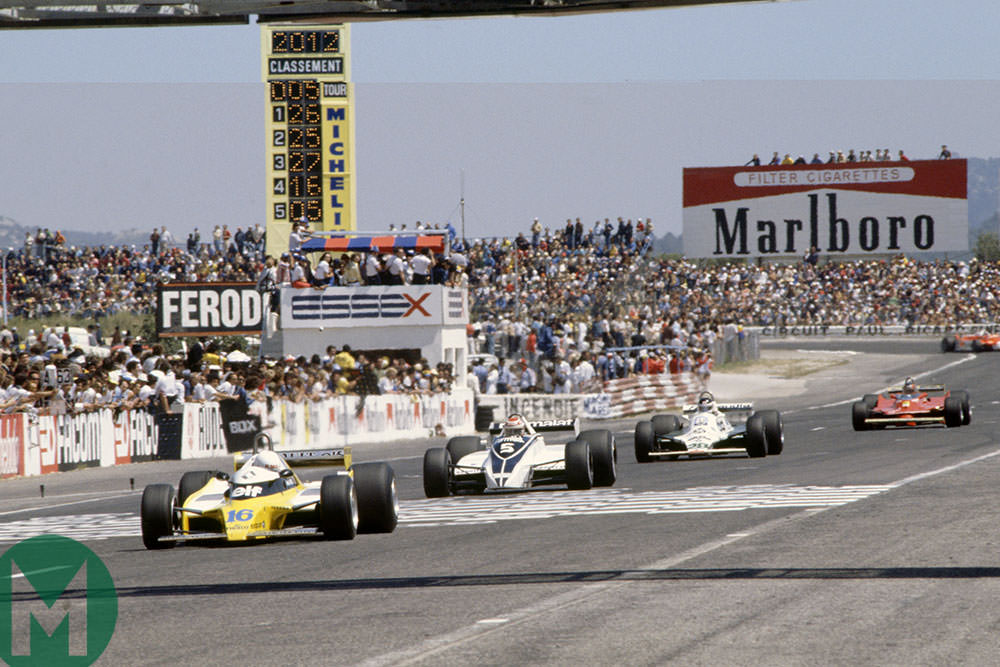 1902 The Automobile Club de France organised the major city-to-city race of the year since 1896. An ambitious route from Paris to Vienna was chosen for 1902 and 118 cars started with Marcel Renault’s 16hp light car the surprise winner by 35 minutes. There was a simultaneous race for the Gordon Bennett Cup (Coupe internationale) which stopped at Innsbruck with Selwyn Edge’s Napier the only finisher. Renault was killed during the ill-fated Paris-Madrid less than a year later.

1980 Qualifying for the 1980 French Grand Prix (start, above) provided hope of a home victory with French drivers in French cars filling the top three grid positions. Alan Jones had other ideas. He qualified his Williams fourth and gradually worked his way past René Arnoux and Didier Pironi before closing on race leader Jacques Laffite’s Ligier as the Frenchman’s tyres went off. Jones then took the lead and eased to victory which he celebrated by lapping Paul Ricard with Union Jack unfurled. Pironi also passed his ailing team-mate to finish second.

1966 The 1950 World Champion Giuseppe Farina was driving to Reims for the 1966 French Grand Prix when he lost control of his Lotus Cortina and crashed into a couple of telegraph poles near Chambéry in the Alpes. The Italian was killed instantly.

1975 Ralf Schumacher was born 43 years ago in Hürth-Hermühlheim. The younger Schumacher scored six Grand Prix wins during a career spent in the inevitable shadow of seven-time champion Michael. He graduated to Formula 1 with Jordan in 1997 and, in two seasons, delivered three podium finishes and promotion to Williams in 1999. BMW engines helped Schumacher to win six times and he finished in the championship top five from 2000 to 2003. Three well-paid seasons with Toyota proved disappointing as Schumacher’s unfulfilled F1 career drew to a close. 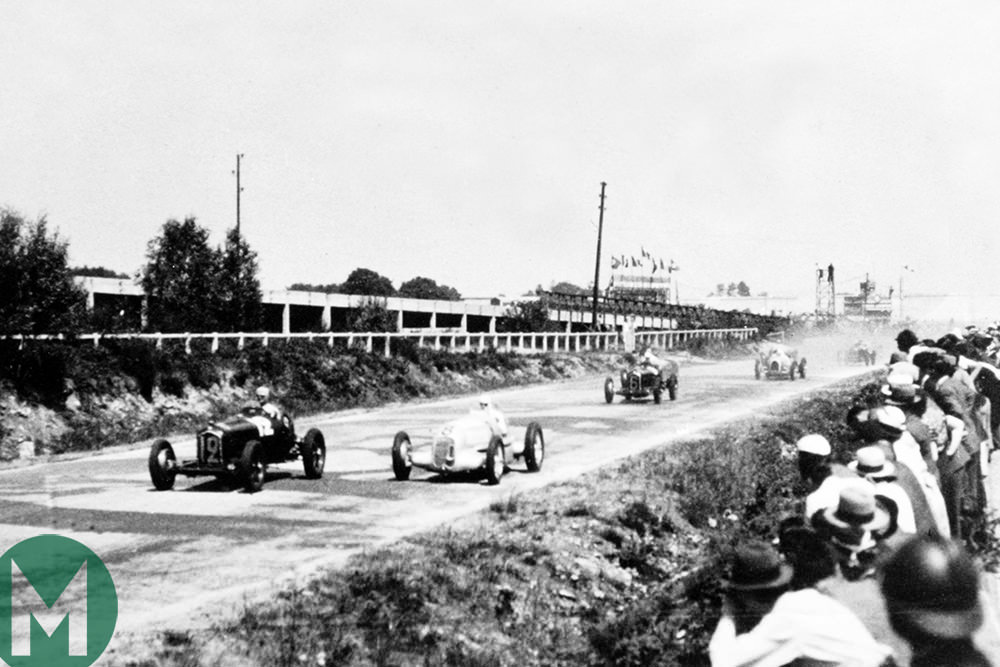 1934 The German Mercedes-Benz and Auto Union teams made their Grand Prix debut (above) at Montlhéry on this day in 1934. With state funding and modern technology, there was little doubt that one of the newcomers would win. Driving an old-fashioned Alfa Romeo ‘P3’ for Scuderia Ferrari, Louis Chiron came from the third row of the grid (with more than a hint of a jump start) to lead the opening lap. Hans Stuck’s Auto Union was soon ahead but, one-by-one, the new cars failed before half distance. That left Chiron to lead a surprise Alfa Romeo 1-2-3 in the French Grand Prix.

1973 A couple of weeks after his last-gasp defeat in Sweden, Ronnie Peterson benefited from a collision between Lotus team-mate Emerson Fittipaldi and McLaren’s inexperienced Jody Scheckter to score his breakthrough Formula 1 victory in the 1973 French Grand Prix. Scheckter had been outstanding at Paul Ricard: qualifying on the front row and leading for 41 laps before Fittipaldi’s lunge. Peterson reeled off the remaining 14 laps with François Cevert (Tyrrell) and Carlos Reutemann (Brabham) over 40 seconds behind at the finish.

1979 The 1979 French Grand Prix was notable for Jean-Pierre Jabouille scoring Renault’s first F1 victory but is best-remembered for the famous duel for second-place between Gilles Villeneuve and René Arnoux. During the last couple of laps, the young chargers repeatedly banged wheels and changed positions, on and off the track, before Villeneuve snatched second at the finish. The Renaults qualified on the front row but Villeneuve led for the opening 46 laps before his tyres degraded. That allowed Jabouille to take the lead and Arnoux close in but Villeneuve was not to be denied second.

1989 Daniel Ricciardo celebrates his 29th birthday today. The 2009 British Formula 3 Champion graduated to Grand Prix racing in 2011 by making his race debut for HRT. He spent the next two seasons with Scuderia Toro Rosso before being promoted to the senior Red Bull Racing squad in 2014. That season was the making of Ricciardo for he outshone four-time champion Sebastian Vettel and won three times. Third in the World Championship that year and in 2016, Ricciardo now has seven GP victories to his name. 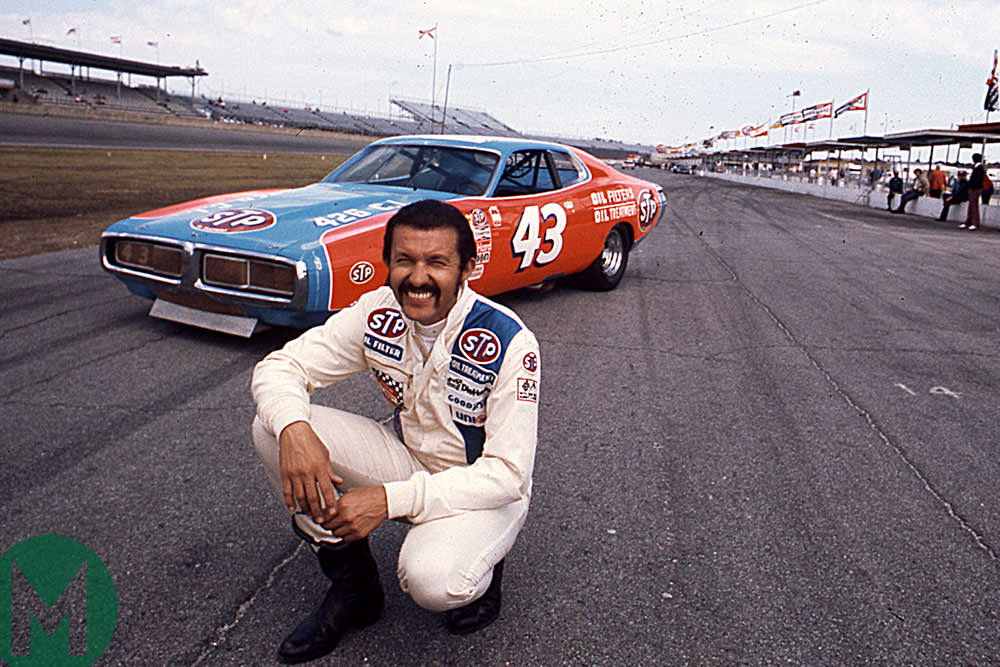 1937 Richard Petty (above, in 1973) was born on this day in Level Cross, North Carolina. The son of three-time NASCAR champion Lee Petty, ‘The King’ made his senior stock car debut in 1958 and he scored the first of his 200 victories (plus two as a relief driver) at Charlotte Fairgrounds in 1960. Runner-up for three years in a row, he was the first driver to win the NASCAR title on seven occasions. He also won the Daytona 500 seven times before retiring in 1992.

1961 Giancarlo Baghetti won the first two minor Formula 1 races he started but he only qualified 12th for his World Championship debut in the 1961 French Grand Prix. Driving a semi-works Ferrari Dino 156, Baghetti was on hand when the dominant factory cars retired. He battled the Porsches of Dan Gurney and Joakim Bonnier with Baghetti beating the American by just 0.1sec on his debut.

1966    The third round of the 1966 World Championship provided Jack Brabham with his first victory since 1960 and an important place in history. Lorenzo Bandini’s pole-winning Ferrari was leading by 25 seconds when his throttle cable broke which left Brabham’s Brabham-Repco to win the French Grand Prix. It was the first time a driver had won a World Championship race in a car bearing his name.

1977 Dijon-Prenois was the scene of a mighty duel for the lead of the 1977 French Grand Prix between James Hunt, John Watson and Mario Andretti. The reigning champion led from the start but poor handling restricted him to third at the finish. Watson’s Brabham-Alfa then controlled the race until his tanks ran dry on the final lap. Andretti took advantage, when Watson’s engine spluttered, to snatch victory.

1987 Ferrari team leader Sebastian Vettel (below, with Michael Schumacher in 2012) was born on the day in Heppenheim in 1987. He scored a point on his Formula 1 debut when deputising for BMW Sauber’s Robert Kubica at the 2007 United States Grand Prix. The next season and a half with Scuderia Toro Rosso included pole position and victory in the wet Italian GP in 2008. Promoted to Red Bull Racing a year later, Vettel won four successive titles during a dominant run from 2010. He moved to Ferrari in 2015 and now has 50 GP victories to his name. 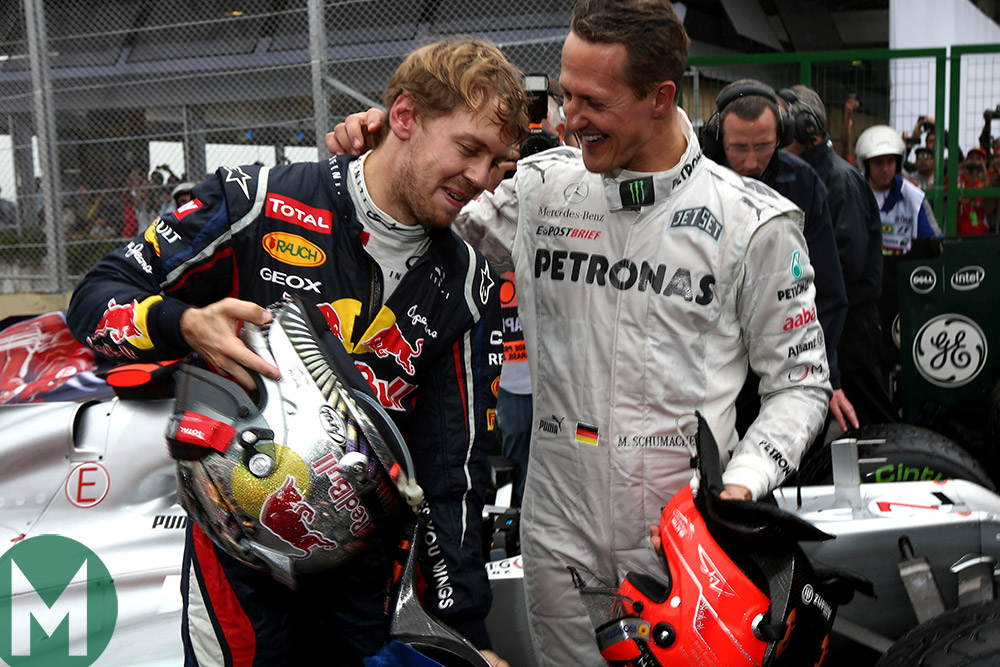 1914 The threat of war in Europe was the backdrop to the 1914 Grand Prix de l’Automobile Club de France on the roads outside Lyons. This just added to the tension for what was one of the great early GPs. Cars started in pairs at 30 second intervals and Max Sailer’s Mercedes led the opening five laps on adjusted time before retiring. Georges Boillot, winner for the last two years and the hero of France, held a narrow advantage over the Mercedes of 1908 winner Christian Lautenschlager. The German took the lead with three 23-mile laps to go and led a Mercedes 1-2-3 when Boillot retired.

1948 René Arnoux celebrates his 70th birthday today. He made his debut in 1978 with Martini but it was with Renault and Ferrari that he won seven times and often excelled in qualifying. He challenged for the 1983 title for Ferrari but was dropped after the 1985 Brazilian Grand Prix. He returned with Ligier but rarely rediscovered that sparkle during four seasons with the team.

1954 Mercedes-Benz made its Formula 1 comeback at Reims in 1954 with three W196 streamliners lining up 1-2-7 on the grid. It was a dominant return with Juan Manuel Fangio and debutant Karl Kling lapping the opposition and leading all the way to a famous 1-2 victory. Hans Herrmann set the fastest race lap in the third car. That victory came 40 years to the day after winning the 1914 race. 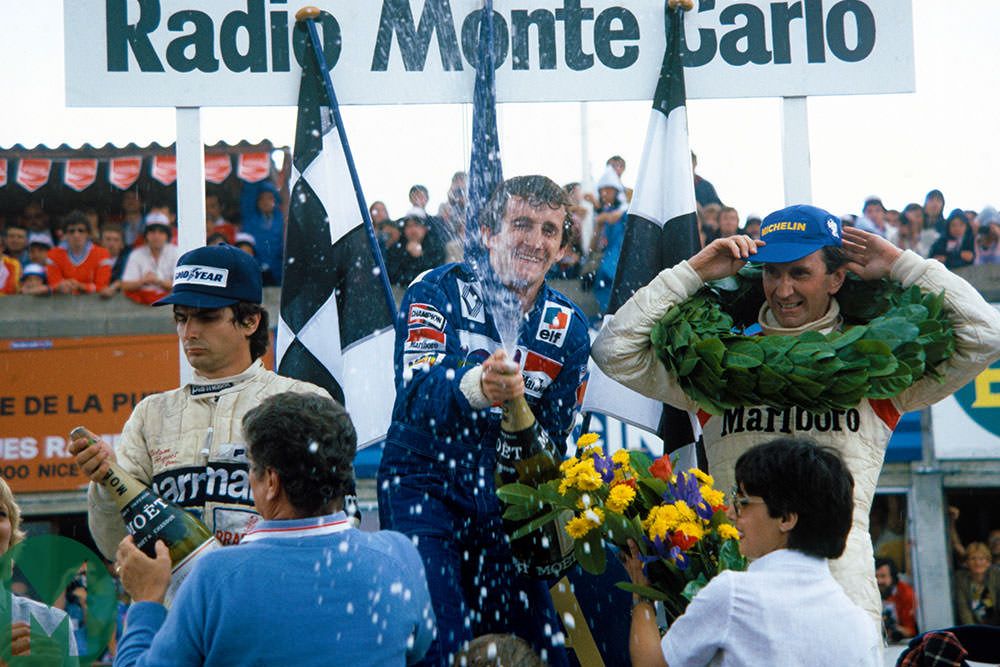 1981 Alain Prost (Renault, above) scored his first Formula 1 win in the French Grand Prix at Dijon-Prenois when rain played its part. This was the first event since Goodyear returned to F1 by supplying Brabham and Williams and Nelson Piquet’s BT49C was leading when the heavens opened after 58 laps. Goodyear did not have the soft tyres required for the restart and Piquet slipped to third on aggregate. John Watson finished second for McLaren.

1992 This was another race to be run in two parts due to rain. Nigel Mansell led Riccardo Patrese in a Williams-Renault 1-2 in the 1992 French Grand Prix to equal Jackie Stewart’s 27 wins, the most for a British driver at that time. The class of 1992, Williams locked out the front row and Patrese was in the lead when light rain prompted a red-flag after 18 laps. He retook the lead on the restart but reluctantly obeyed team orders by letting Mansell passed after a couple of laps. Martin Brundle was third for Benetton and both Lotuses scored points.