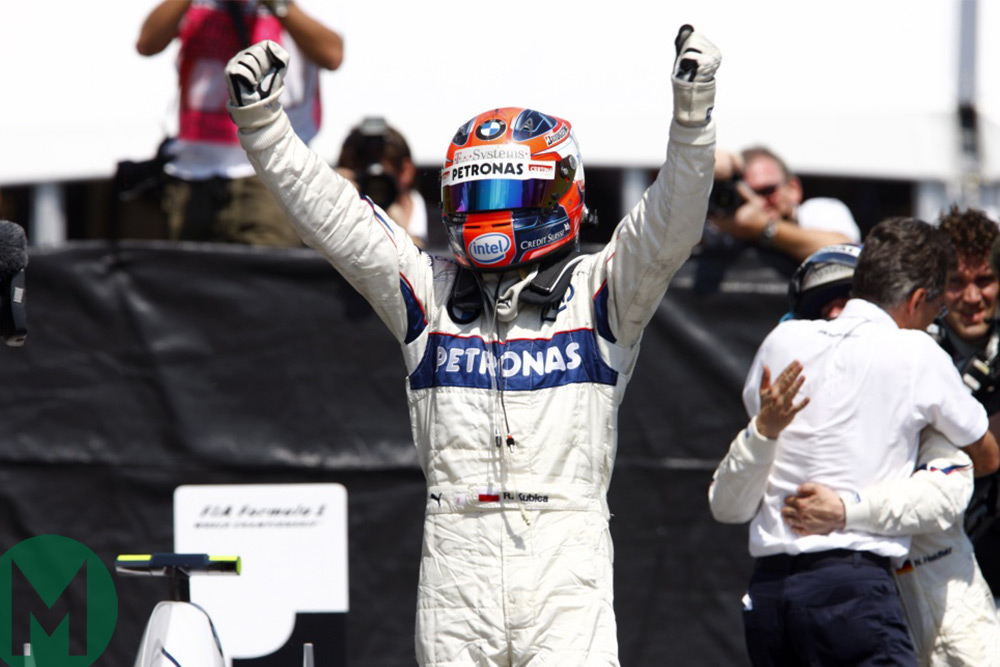 2008 A year after surviving a spectacular accident during the 2007 Canadian Grand Prix, Robert Kubica became the first Polish driver to win a world championship race. Lewis Hamilton started from pole position and led early on. He pitted when the safety car was deployed and failed to see the pit exit was closed to let the safety car past. He braked too late and crashed into Kimi Räikkönen’s stationary Ferrari, eliminating both cars. Kubica re-joined and the one-stopping Nick Heidfeld completed a 1-2 for BMW Sauber. David Coulthard was second for Red Bull Racing.

2014 In just his sixth race for Red Bull, Daniel Ricciardo snatched his maiden Grand Prix win at Montréal by passing Sergio Pérez of Force India and then Nico Rosberg’s down-on-power Mercedes late in the race. Pérez’s fine showing ended in a high-speed accident with Felipe Massa, and it was Sebastian Vettel’s Red Bull that finished third.

1898 The “Abruzzi Robber”, Luigi Fagioli, was born on this day 120 years ago. At 53 years and 21 days old, he is the oldest driver to win a round of the Formula 1 World Championship. That was the 1951 French Grand Prix when he handed his third-placed Alfa Romeo 159 to Juan Manuel Fangio, whose car had been delayed. Fangio took the lead on lap 51 and won. Fagioli had been a star of the pre-war GP scene, winning the 1933 Italian GP in a Scuderia Ferrari Alfa Romeo and successful for Mercedes-Benz in the 1934 Italian (with Rudolf Caracciola), Spanish and 1935 Monaco GPs. He died from injuries sustained in the 1952 Monaco GP for sports cars.

1968 It is 50 years since Bruce McLaren scored the first victory for his eponymous new marque at the 1968 Belgian Grand Prix. Chris Amon’s Ferrari started from pole position but both he and subsequent leader John Surtees retired. Denny Hulme’s McLaren then led before being sidelined and Jackie Stewart ran out of fuel with a lap to go. That left McLaren to inherit a historic victory – emulating Jack Brabham as a GP winner in a car that bore his name.

1979 Klaus Ludwig, Don and Bill Whittington won the Le Mans 24 Hours for the Kremer Brothers, but actor Paul Newman’s second-place finish attracted most attention outside the specialist press. This was a Porsche 1-2-3-4, although the works cars did not finish. Heavy rain fell throughout the night and continued into Sunday, making this the slowest edition of the race since 1958. The Kremer Porsche 935-K3 spent more than an hour being repaired by Don Whittington out on the Mulsanne straight but there was no Hollywood ending for the car Newman shared with Rolf Stommelen and owner Dick Barbour as it was also delayed.

2007 Having finished on the podium at the first five races of his rookie Formula 1 season, Lewis Hamilton converted a first pole position into his maiden Grand Prix win in Canada. There were four safety car periods, including one triggered by Robert Kubica’s huge barrel-roll at the hairpin. Kubica’s BMW Sauber team-mate Nick Heidfeld finished second with Alex Wurz third for Williams. 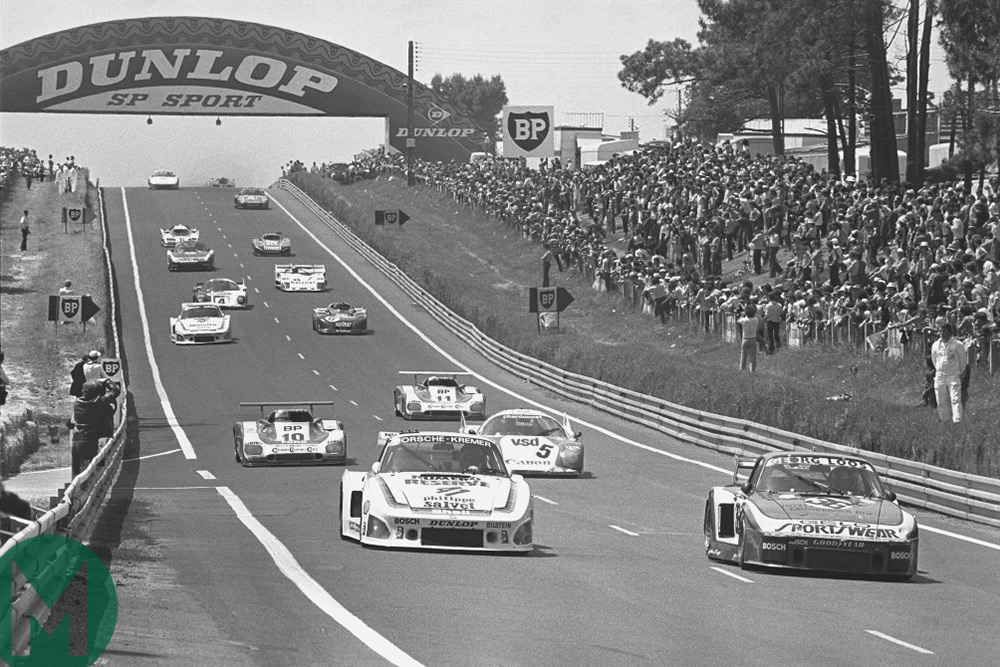 1939 Sir Jackie Stewart was born on this day in Dunbartonshire in 1939. He made his Formula 1 debut for BRM in 1965 and won at just the eighth attempt. He moved to Ken Tyrrell’s Matra International team in 1968 and clinched his first world title a year later. Tyrrell was a constructor in his own right when Stewart dominated the 1971 season. He then beat the Lotus-Fords in 1973 in what was his last season before retirement. Stewart won a then-record 27 of the 99 GPs he started.

1955 The worst loss of life in motor racing history occurred when the Mercedes of “Pierre Levegh” was launched into the crowd opposite the pits at Le Mans. The Frenchman and more than 80 spectators were killed, but the race went on. The Juan Manuel Fangio/Stirling Moss Mercedes led before being withdrawn and Mike Hawthorn and Ivor Bueb’s Jaguar continued on to a sad victory.

1967 Dan Gurney and A.J.Foyt drove a Shelby American Ford GT40 MkIV to victory in the 1967 Le Mans 24 Hours. Fords had run 1-2-3 during the night but Mario Andretti crashed and third-placed Bruce McLaren picked up a puncture on the debris. The New Zealander was fourth after further delays and a pair of Ferrari 330P4s finished second and third. Gurney then became the first driver to spray champagne to celebrate victory on the podium.

1972 Graham Hill shared the winning Matra-Simca MS670 with Henri Pescarolo at Le Mans to become the first driver to win that race, the Monaco Grand Prix and the Indianapolis 500. Matra-Simcas finished first and second, and a third-placed Matra only retired with 90 minutes to go. Veteran Joakim Bonnier led during the early stages but was killed after colliding with another car and crashing into the trees.

1995 Jean Alesi celebrated his 31st birthday by winning the 1995 Canadian Grand Prix for Ferrari. Starting a GP for the 91st time, Alesi appeared on course for yet another second-place finish when he passed both Gerhard Berger and Damon Hill. But the electronics in Michael Schumacher’s leading Benetton-Renault gearbox went haywire to leave the popular Frenchman to score an emotional victory. Rubens Barrichello and Eddie Irvine finished second and third for Jordan-Peugeot. 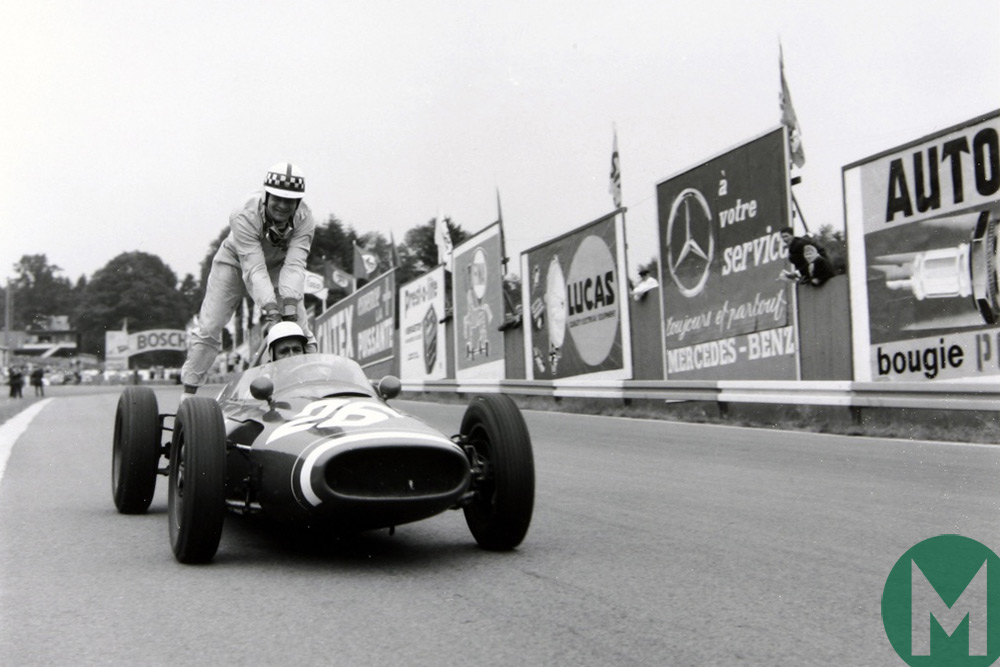 1930 The first driver to win a Grand Prix for Team Lotus, Innes Ireland was born on this day in 1930. He joined Lotus in 1959 and finished fourth in Holland on his GP debut. A distant fourth in the 1960 World Championship, he won the following year’s United States GP. Despite that success, Ireland left the works Lotus team and did not win another championship race. Described by Stirling Moss as “the James Hunt of my era,” Ireland succumbed to cancer in 1993.

1988 A huge crowd including a large British contingent watched Johnny Dumfries, Andy Wallace and Jan Lammers win the 1988 Le Mans 24 Hours to deliver the marque’s first Le Mans victory since 1957. Roger Dorchy broke the 400kph barrier on the Mulsanne straight for WM-Peugeot. During the night, the Jaguar battled the Hans-Joachim Stuck/Klaus Ludwig/Derek Bell Porsche for the lead before limping home in fourth gear; winning by less than a lap.

1930 1923 French Grand Prix winner Sir Henry Segrave was killed on Friday, June 13 1930 during a Water Speed Record attempt on Lake Windermere. His new charge Miss England II hit a log and capsized. A mechanic drowned but Segrave was recovered to hospital. He briefly regained consciousness but succumbed to his injuries later that day.

1976 The Swedish Grand Prix had a reputation for throwing up an unexpected result and the 1976 race was unique. The six-wheel Tyrrell P34-Fords of Jody Scheckter and Patrick Depailler qualified in first and fourth positions but it was Mario Andretti’s Lotus that led the opening 45 laps until his engine broke. That left Sckeckter and Depailler at the head of the field. They completed the remaining 27 laps to score a historic 1-2 – the only Formula 1 victory for a six-wheeled car. Chris Amon ran fourth for Ensign before he crashed when his suspension broke at half-distance.

1964 Dan Gurney dominated the 1964 Belgian Grand Prix for Brabham by qualifying on pole position, lapping even faster in the race and leading by 40sec with a couple of laps to go. He made a precautionary stop for fuel but there was none in his pit. Sent on his way, he ran out of fuel on the last lap. New leader Graham Hill’s fuel system failed so Bruce McLaren appeared set for victory until he lost power at La Source and coasted across the finish line on the decent to Eau Rouge. Jim Clark, who had been delayed by an unscheduled pitstop, passed the stricken Cooper before the chequered flag. Unaware that he had won, Clark promptly ran out of fuel at the same point of the track as Gurney, who told him of his success.