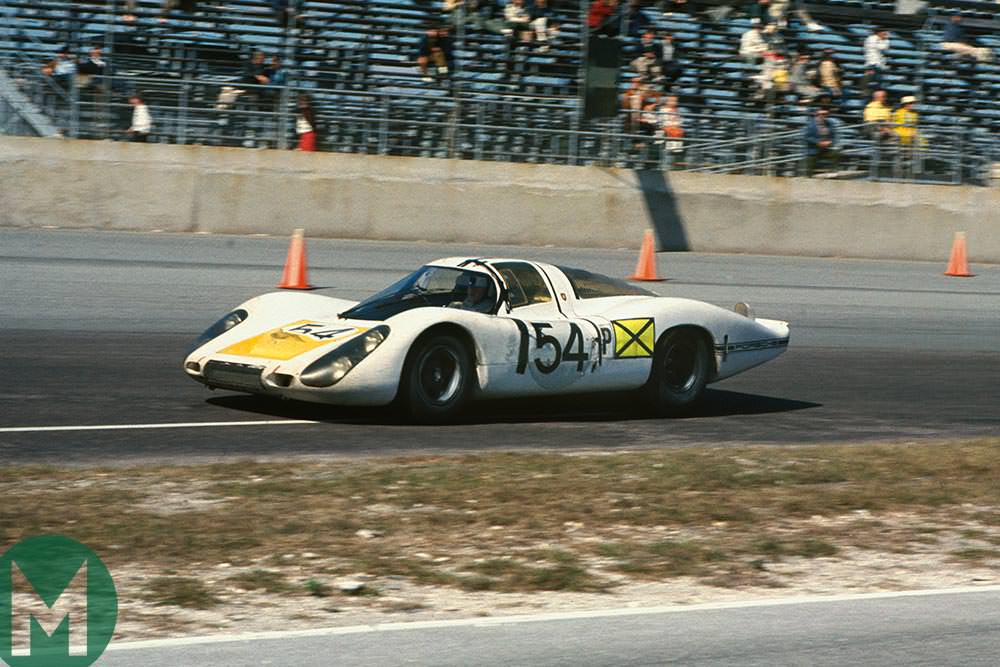 1939 Sports car team boss and sometime racing driver Jochen Neerpasch and March Engineering founder Robin Herd were born on the same day in 1939. Neerpasch’s racing career included winning the 1968 Daytona 24 Hours before graduating to management with Porsche, Talbot and then Sauber-Mercedes. Herd formed March Engineering in the winter of 1969/70 with Max Mosley, Alan Rees and Graham Coaker with ambitions to sell cars in Formula 1, F2 and F3. The marque eventually won three Grands Prix and 77 European Formula 2 races – more than any other manufacturer.

1981 Grand Prix driver and motorcycling legend Mike Hailwood was killed in a road accident near his home in Birmingham. He was collecting the evening’s take away dinner when he hit a lorry that was making an illegal U-turn on a dual carriageway and his daughter also lost her life in the tragedy. “Mike the Bike” won nine world titles on two wheels and was crowned 1972 European Formula 2 Champion for Surtees. His best result in a Formula 1 Grand Prix was second at Monza in 1972.

1986 Nelson Piquet began his first season with Williams by leading Ayrton Senna (Lotus-Renault) in a Brazilian 1-2 at Rio de Janeiro’s Jacarepagua circuit. Senna had qualified on pole position (with his countryman alongside) but could not match the Williams-Honda’s fuel consumption in the race. Nigel Mansell crashed on the opening lap when challenging Senna for the lead and Alain Prost, who recovered from 13th on the opening lap to lead, retired with a blown engine.

2003 Twenty three-year-old Kimi Räikkönen scored his breakthrough victory for McLaren in the 2003 Malaysian Grand Prix. Youth was to the fore at Sepang for Renault. Fernando Alonso became the youngest pole position winner in history, a record since surpassed by Sebastian Vettel. It was a rare ‘off’ day for reigning champion Michael Schumacher who finished in a lapped sixth after an eventful race. He crashed into Jarno Trulli’s Renault on the opening lap, pitted to replace his front wing and was handed a drive-through penalty for causing an avoidable accident.

1967 Jochen Rindt (Roy Winkelmann Racing Brabham) won Snetterton’s opening round of the new European Formula 2 Trophy following a wheel-to-wheel dice with Graham Hill (Team Lotus) on Good Friday. They both equalled the lap record and Rindt passed his rival on the penultimate lap and survived a late lunge at the final corner to win by inches – both drivers officially credited with the same race time.

1985 Reigning Formula 2 champion Mike Thackwell won the very first Formula 3000 race at a cold and wet Silverstone. It was the New Zealander’s third victory in the International Trophy in five years. F3000 was devised as a replacement for the under-supported F2 using 3-litre engines and existing F2 chassis regulations. Old F1 cars were also allowed in that first season but did not challenge the purpose-built March or Ralt chassis.

1991 An exhausted and emotional Ayrton Senna finally won the Brazilian Grand Prix for the first time. He qualified on pole position and led all-the-way despite a gearbox that “went crazy” in the closing stages. The McLaren was jammed in sixth by the end and Senna beat Riccardo Patrese by 2.991sec as a consequence. The local hero had to be lifted from his car in parc fermé such was the exertion needed to win for the 28th time in F1. 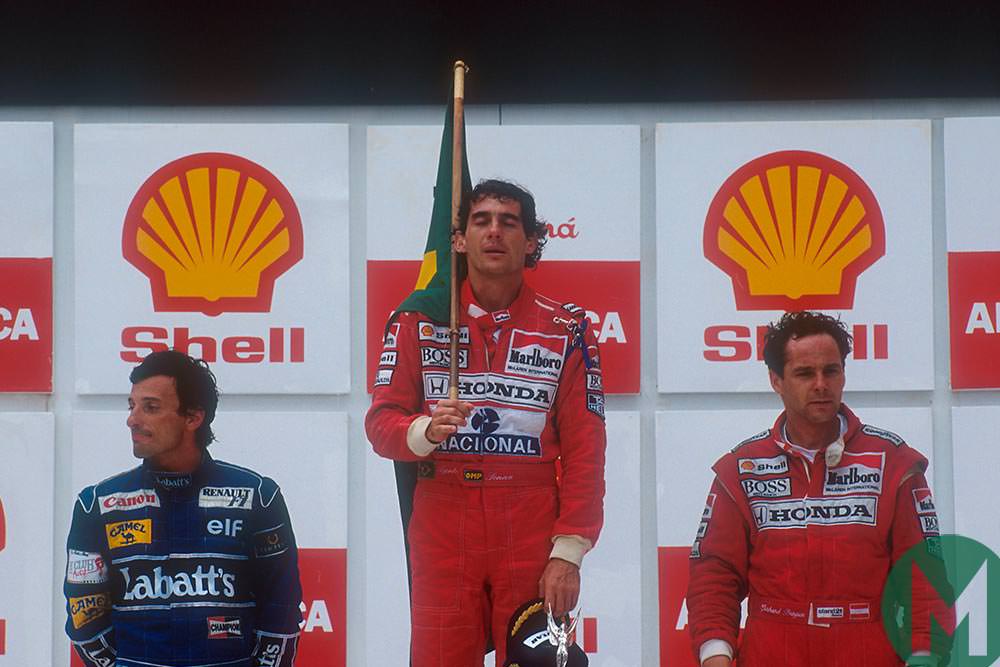 1972 Ferrari’s perfect start to the 1972 World Championship of Makes continued in the Sebring 12 Hours with a third successive 1-2 finish. Jacky Ickx and Mario Andretti repeated their victory at Daytona with Ronnie Peterson and Tim Schenken second once more – the 312Bs finishing more than 20 laps clear of their closest challenger. The Scuderia won every round of that year’s championship except for the Le Mans 24 Hours where it withdrew, claiming that its V12 engine would not last the distance.

1984 Alain Prost beat Keke Rosberg at Rio de Janeiro to win the opening Grand Prix of 1984. Prost’s replacement at Renault, Derek Warwick seemed on course for victory when he took the lead on lap 39. He had banged wheels with Niki Lauda’s McLaren early in the race and a deserved win was lost when his left front wishbone broke. The event was notable for the quality of the debutants that included Ayrton Senna, Stefan Bellof and Martin Brundle.

1990 The Brazilian Grand Prix returned to truncated Interlagos after a 10-year absence in 1990 and Ayrton Senna qualified on pole position and led the race with ease. But Satoru Nakajima’s Tyrrell slid into the McLaren while being lapped on lap 41 and Senna dropped to third place as he replaced the nosecone. That handed a 40th career victory to his arch-rival Alain Prost (Ferrari) with the second McLaren of Gerhard Berger second.

1952 Didier Pironi was born near Paris on this day in 1952. He won the 1980 Belgian Grand Prix for Ligier before moving to Ferrari for the following season. It was during the first half of 1982 that Pironi established himself as a leading contender in what was a controversial and tragic period for the team. Pironi ignored team orders to “slow” during the closing stages at Imola and team-mate Gilles Villeneuve raged about the perceived treachery. Villeneuve was killed 13 days later during qualifying at Zolder and Pironi, who led the championship after winning in Holland, was seriously injured at Hockenheim and did not race in F1 again.

1958 Elio de Angelis was born in Rome to wealthy businessman Giulio in 1958. He started 90 GPs for Lotus – more than any other driver – and won twice. He scored Lotus’s first victory in four years by withstanding Keke Rosberg’s pressure to win the 1982 Austrian Grand Prix by just 0.050sec and then inherited nine points in the 1985 San Marino GP when Alain Prost’s underweight McLaren was disqualified. A concert standard pianist, de Angelis was third in the 1984 World Championship before moving to Brabham in 1986 but the 28-year-old was killed during testing at Paul Ricard in May.

1989 Nigel Mansell scored an unexpected victory on his debut for Ferrari in the Brazilian Grand Prix. His Ferrari 640 had been troubled throughout qualifying as the team tried to sort the temperamental new electro-hydraulic gearchange but the system ran faultlessly when it mattered. Ayrton Senna and Gerhard Berger were eliminated at the start and Alain Prost could only finish second after losing his clutch. Just 10.493sec covered the top four finishers with the impressive Johnny Herbert fourth on his debut for Benetton despite injured ankles sustained in the Brands Hatch Formula 3000 accident in August. 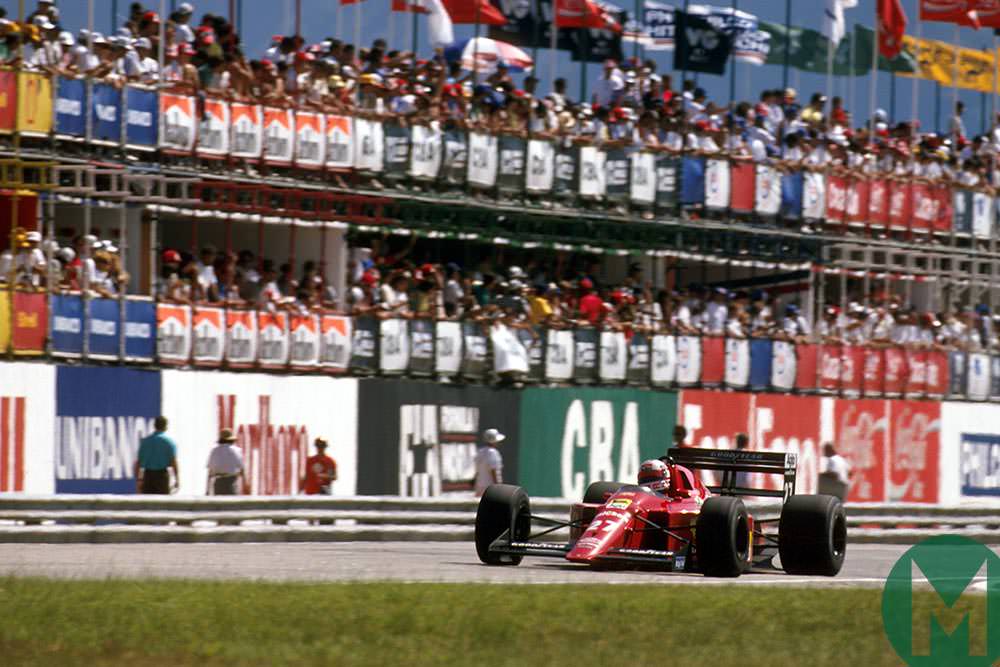 1983 The McLaren MP4/1C-Fords of John Watson and Niki Lauda came from 22nd and 23rd on the grid to finish first and second in Long Beach. Keke Rosberg crashed into Patrick Tambay while passing the leading Ferrari and then hit Jean-Pierre Jarier and Jacques Laffite at the next corner. Laffite was able to continue in the lead but slipped to fourth when his tyres degraded. It was the last time the Long Beach Grand Prix was part of the F1 World Championship.

1971 Thirteen-time Grand Prix winner David Coulthard was born in Twynholm. Williams test driver in 1994, he replaced Ayrton Senna after the Brazilian was killed during the San Marino GP. The young Scot was chosen ahead of Nigel Mansell to partner Damon Hill in 1995 and his promise was confirmed by victory in that year’s Portuguese GP and third in the standings. He spent the next nine seasons with McLaren-Mercedes and scored the team’s first victory in 49 races in the 1997 Australian GP. However, it was team-mate Mika Häkkinen who won back-to-back World Championships at the end of the millennium. Twice third in the standings, Coulthard finished as runner-up to Michael Schumacher in 2001. He raced for newcomers Red Bull Racing from 2005-08 before retiring from Formula 1.

1994 The 1994 World Championship opened in Brazil with victory for Michael Schumacher’s Benetton-Ford. Ayrton Senna qualified for his Williams-Renault debut in pole position but spun while chasing Schumacher in the closing stages. Jos Verstappen made his debut as Schumacher’s team-mate but was eliminated in a crash that also took out Martin Brundle, Eddie Irvine and Eric Bernard. The race saw the return of refuelling pitstops for the first time since 1983.

1952 Promising Englishman Tony Brise was born Dartford. A champion in both Formula 3 and Atlantic, Brise won the 1975 Long Beach Grand Prix (for Formula 5000 cars) and emerged as a true star of the future during that year’s Formula 1 World Championship. He finished sixth in Sweden but was killed in the plane accident that also claimed the life of team owner Graham Hill and four others.

1976 Clay Regazzoni scored an emphatic victory on the streets of Long Beach where he qualified on pole position and led Niki Lauda from start-to-finish, eclipsing his team-mate for once. Patrick Depailler (Tyrrell-Ford) qualified on the front row and survived contact with James Hunt’s McLaren to finish third.

1993 Ayrton Senna revelled in the conditions when rain arrived during the Brazilian Grand Prix. The Williams-Renaults of Alain Prost and Damon Hill ran 1-2 in the dry but were no match for Senna as soon as the heavens opened. Hill finished second but Prost crashed into Christian Fittipaldi’s Minardi when he lost control. It was McLaren’s 100th Grand Prix victory. 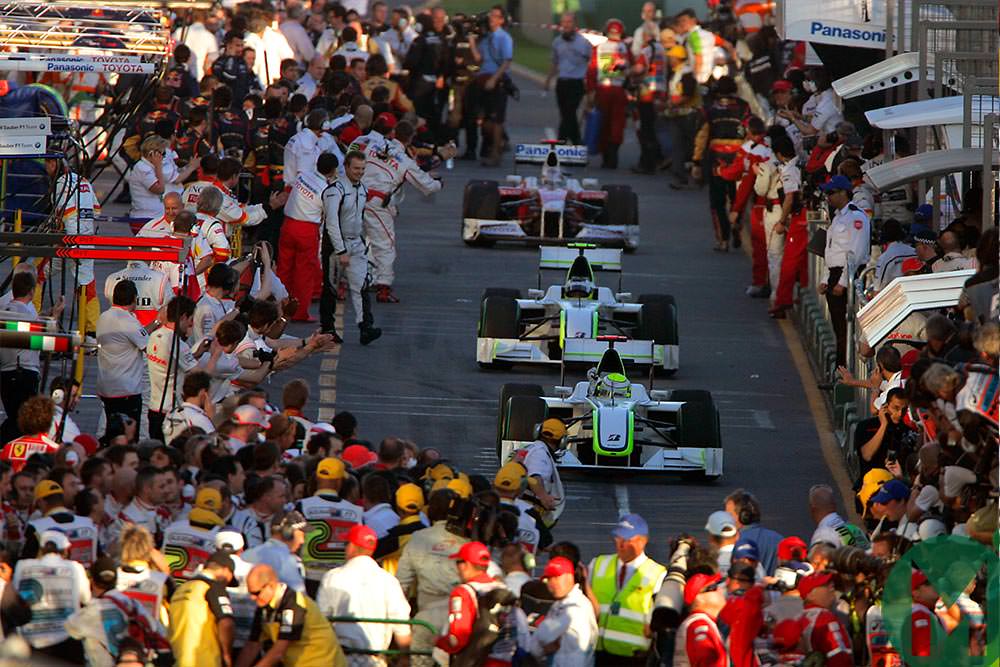 1981 Carlos Reutemann disobeyed Williams team orders to beat Alan Jones in the wet 1981 Brazilian Grand Prix, ignoring repeated JONES-REUT signals from the pit wall. The rain was so heavy that the race had to be stopped a lap early when two hours had elapsed. Riccardo Patrese (Arrows) finished third to continue his good early season form and Marc Surer gave Ensign its best-ever GP finish by coming fourth. Nelson Piquet’s hydro-pneumatic Brabham was the star of qualifying but he wrongly chose slick tyres for the race.

2009 Brawn Grand Prix emerged from the ashes of the Honda Formula 1 team to dominate the 2009 Australian Grand Prix. Now powered by Mercedes-Benz engines, Jenson Button and Rubens Barrichello qualified on the front row and dominated the race. Button led all-the-way at the start of his championship-winning campaign and Barrichello completed a dream 1-2 when Sebastian Vettel and Robert Kubica crashed into each other in the closing stages. Lewis Hamilton originally finished fourth but was later disqualified for misleading the stewards.