The milestones from this week in motor sport, from the Archive and Database 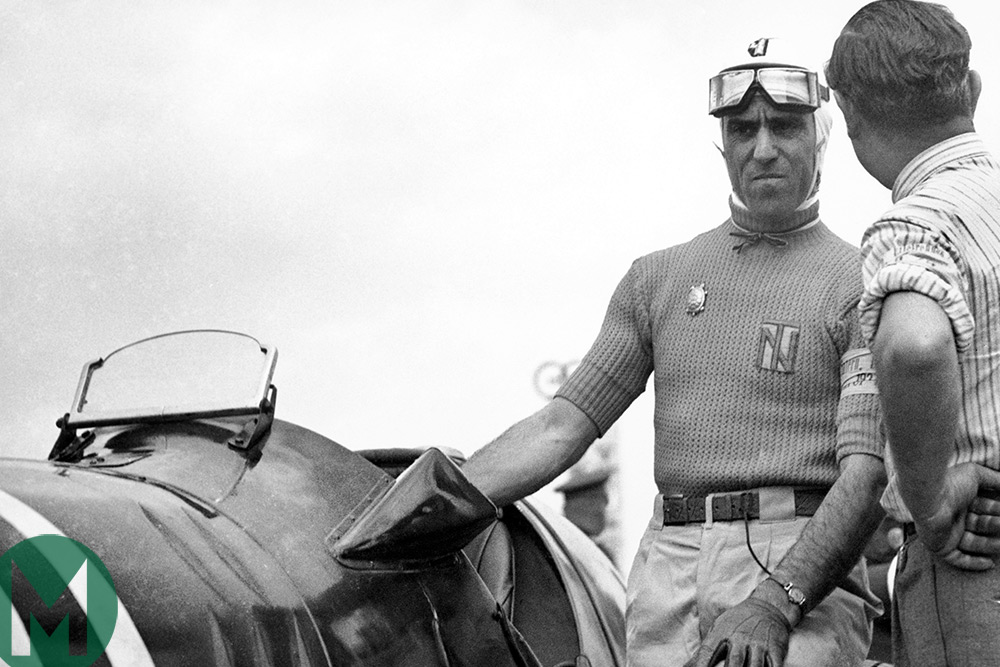 1892 Pre-war Grand Prix and Le Mans winner Tazio Nuvolari is born. The fourth son of a wealthy farmer, Nuvolari raced motorcycles during the early 1920s and was crowned Italian 500cc champion in 1924. He was also winning car races by that time, although he was injured when he crashed an Alfa Romeo P2 when the gearbox broke during a test. Nuvolari sold land to buy a Bugatti T35 and rode his final bike race in 1930. Victory in that year’s Mille Miglia and Tourist Trophy was followed by further successes in the 1931 Targa Florio and Italian GP. By this time the man to beat, Nuvolari snatched last-lap victories in the 1933 Le Mans 24 Hours and 1935 German GP. That Nürburgring win was despite driving an out-of-date and underpowered Alfa Romeo against the mighty works Mercedes and Auto Union teams. He finally joined Auto Union in 1938 and won both the Italian and Donington GPs. It was appropriate that he should win the final race before World War II – the 1939 Yugoslav GP – and Nuvolari briefly raced after peace was restored to Europe although his health was fading. He died in his hometown of Mantua in 1953.

1958 Former Grand Prix driver and Champ Car race winner Roberto Guerrero is born. Winner of the 1981 Thruxton Formula 2 race, the popular Colombian graduated to Formula 1 with Ensign in 1982. He remained with the renamed Theodore Racing Team for another season but two years at the back of the grid yielded little in the way of results. He switched to the Champ Car World Series and finished second in the 1984 Indianapolis 500. He won at Phoenix and Mid-Ohio in 1987 when driving Vince Granatelli’s fluorescent orange March-Cosworth but lost the Indy 500 when he stalled during his final pitstop. Seriously injured when he crashed while testing at Indy, he returned at the start of the 1988 season but did not win again. By now an occasional driver, Guerrero qualified on pole position for the 1992 Indy 500 only to crash on the warm-up laps. He switched to the new Indy Racing League in 1996 and started his last such race in 2000.

1973 Red Bull Racing team principal Christian Horner is born. The Englishman gave up his own racing career to establish Arden International in Formula 3000, for whom Björn Wirdheim and Vitantonio Liuzzi won successive titles. Horner became Formula 1’s youngest team principal when appointed by newcomers Red Bull in 2005 and the team won both drivers’ and constructors’ titles for four years in a row from 2010.

1906 Founder of the motor company that bears his name, Soichiro Honda is born. He ran a car repair business before World War II but stopped his own racing career when he injured an eye in an accident in 1936. The Honda Motor Company began manufacturing motorcycles in 1948 before expanding into vans and cars from 1962. It entered Formula 1 two years later, and Richie Ginther won the 1965 Mexican Grand Prix at the end of the 1.5-litre era. John Surtees scored victory for the marque in the 1967 Italian GP but Honda withdrew from the championship following Jo Schlesser’s death in 1968. It returned as an engine manufacturer in 1983 and won the constructors’ titles for six successive seasons from 1986 with Williams and then McLaren. Soichiro Honda retired from the company he founded in 1973 and died in 1991.

1876 Successful French pioneer racing driver Victor Hémery is born. He joined Darracq’s competition department in 1900 and scored his first major victory for the marque in the 1905 Circuit des Ardennes. Darracq entered two cars in the Vanderbilt Cup on Long Island at the end of the year and Hémery inherited another international race win when the pacesetting Vincenzo Lancia collided with a slower car. Hémery briefly held the Land Speed Record (at 109.65 mph) that December and he was in the field for the inaugural Grand Prix de l’Automobile Club de France at Le Mans in 1906. He left Darracq in 1907 and drove a Benz into second position in the 1908 French GP before repeating that result in the American Grand Prize of 1908 and 1910. He started the 1922 and 1923 French GPs before running a garage business in Le Mans.

1981 Three-time Le Mans winner André Lotterer is born in Duisburg. Despite success in the junior categories and being named as Jaguar’s Formula 1 reserve driver when just 21 years old, it was in the twin disciplines of sports car racing and Formula Nippon that Lotterer established his reputation. Double Japanese GT Champion, he finally won the Formula Nippon title in 2011 after finishing as runner up on two occasions. He joined Audi’s endurance racing team in 2010 and was crowned world champion in 2012 when sharing with Benoît Tréluyer and Marcel Fässler. He started a Grand Prix for the only time when he was the surprise replacement for Caterham’s Kamui Kobayashi at the 2014 Belgian GP.

1948 Tragic Swedish Formula 1 star Gunnar Nilsson (below) is born. He was a late starter to the sport but the 24-year-old made his Formula 2 debut during his first season racing cars. He won the 1975 British Formula 3 Championship for March and was drafted into Lotus’s Grand Prix line-up when countryman Ronnie Peterson walked away after one race of the 1976 season. Nilsson finished third in his third F1 start at Járama and repeated that result at the Osterreichring. He also won that year’s Martha 1000 Kms at the Austrian venue when sharing a BMW 3.5 CSL with Dieter Quester. Nilsson then passed Niki Lauda’s Ferrari in the wet 1977 Belgian GP to score the only GP win of his two-year F1 career. Due to lead the new Arrows team in 1978, Nilsson was diagnosed with cancer and died a month before his 30th birthday.

1957 Another star to lose his life before his time was born today: Stefan Bellof. He burst onto the international stage by winning the opening two races of the 1982 European Formula 2 Championship as an unheralded newcomer to the series. He joined Porsche’s sports car team in 1983 and won three times when partnered by the experienced Derek Bell. That success continued in 1984 as Bellof combined winning the World Endurance Championship with his maiden Formula 1 campaign, in which he drove a normally aspirated Tyrrell-Ford. Bellof starred at Monaco when third on the road but the team was eventually excluded from the championship. He remained with Tyrrell for 1985 but switched to Brun Motorsport to defend his sports car title. Fourth in the Detroit GP that year, he was killed when he crashed while disputing the lead of the 1985 Spa 1000 Kms. 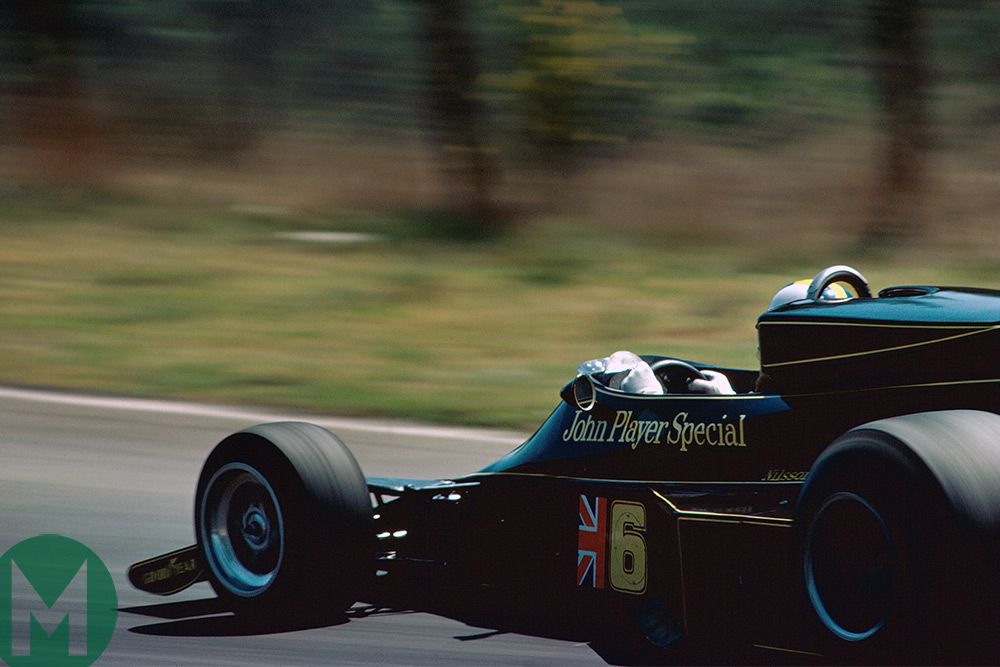 1943 Jacques Laffite is born. Successful in the junior categories and 1975 European Formula 2 Champion, the Parisian was a surprise second for Williams in that year’s German Grand Prix. He joined the new Ligier team in 1976 and scored podium finishes in Belgium, Austria and Italy before recording a breakthrough victory for marque and driver alike in the 1977 Swedish GP. Ligier switched from Matra to Ford engines in 1979 and Laffite won the opening two races of the year. He won the 1980 German GP as he finished fourth in the World Championship for a successive season. Ligier reverted to Matra-power in 1981 and Laffite won twice to challenge for the title until the final race in Las Vegas. Once again fourth overall that year, he returned to Williams for two disappointing seasons in 1983 and 1984. Back with Ligier from 1985, Laffite was equalling Graham Hill’s long-standing F1 starts record (176) when he was injured in the startline accident that stopped the 1986 British GP.

1887 Pietro Bordino is born in Turin. A star of the Fiat team that dominated Grand Prix racing during the 1920s, he led the 1921 Italian GP before retiring and scored board track victories in what is now the IndyCar Series at Beverly Hills and Cotati during 1922. He crashed out of the lead of that year’s French GP when his axle broke in the closing stages but led the Italian GP from start-to-finish at the new Monza Autodrome. A weekend of rare dominance was completed by victory in the supporting voiturette race. Bordino was killed when his Bugatti hit a dog and crashed into a river while practicing before the 1928 Circuito di Alessandria.

1995 Colin McRae wins the RAC Rally to clinch the World Rally Championship – the first British driver to do so. McRae and co-driver Derek Ringer set the pace for much of the event and eventually beat team-mate and title rival Carlos Sainz 36 seconds.