This week’s major milestones from history, via the Archive and Database 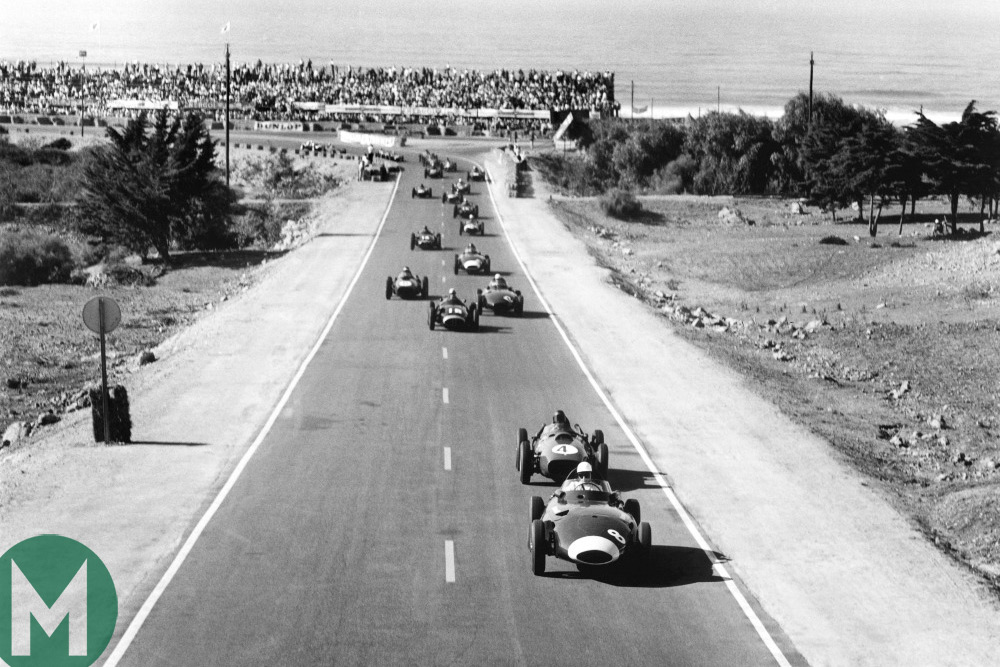 1958 Casablanca’s Ain-Diab district holds the world championship-deciding Moroccan Grand Prix. Stirling Moss, who had already won three times during 1958, and Mike Hawthorn vied for the right to become Britain’s first world champion. Hawthorn qualified on pole position for Ferrari with Moss’s Vanwall second on the grid. Moss led from start to finish but Hawthorn, whose only victory that year came at Reims, finished second to clinch the title by a single point. There was tragedy for Moss’s team-mate Stuart Lewis-Evans was severely burnt when his engine failed and car caught fire. The 28-year-old died in hospital in East Grinstead six days later.

1978 Former Lotus driver Gunnar Nilsson succumbs to cancer in London’s Charing Cross Hospital. The Swede graduated to Formula 1 in 1976 and finished on the podium in his third race. He won the following year’s wet Belgian Grand Prix after team-mate Mario Andretti crashed on the opening lap. Nilsson was due to lead the new Arrows team in 1978 but was too ill to race on.

1984 Estoril hosts the final Grand Prix of the season. The season had been dominated by the McLarens of Alain Prost and Niki Lauda, and the Frenchman led the team’s fourth 1-2 finish of the year. Lauda only qualified 13th but finished 13.425sec behind his team-mate to clinch his third world championship by half a point – the closest winning margin in history. Ayrton Senna qualified and finished third in his final race for Toleman. Nigel Mansell had been set for second place, which would have denied Lauda the title, until his Lotus ran out of brakes and retired.

1990 For the third year in a row, the Alain Prost versus Ayrton Senna title fight is decided at Suzuka. In contrast to the unsatisfactory conclusion 12 months ago, it was now Prost who needed to win to keeps his hopes alive for another race. Senna qualified his McLaren-Honda on pole but was furious when he was not allowed to start from the “clean” outside line. Prost made the better start but Senna simply drove into his rival’s Ferrari in the first corner, eliminating both cars in a high speed crash. Nelson Piquet led Roberto Moreno in a Benetton 1-2 with Aguri Suzuki completing the podium finishers for Larrousse.

2007 The dramatic 2007 Formula 1 season concludes with a three-way title fight in Brazil. Seven points covered rookie championship leader Lewis Hamilton, McLaren team-mate Fernando Alonso and Ferrari’s Kimi Räikkönen before the race. Hamilton qualified second but dropped to eighth when he ran wide while attempting to pass Alonso in the early laps and he lost further time to a gearbox issue. He recovered to finish seventh, but Räikkönen snatched an unlikely title by a single point from both McLaren drivers when he won the race. Felipe Massa was denied a home victory when he obeyed team orders to let Räikkönen past and Alonso eventually finished third. 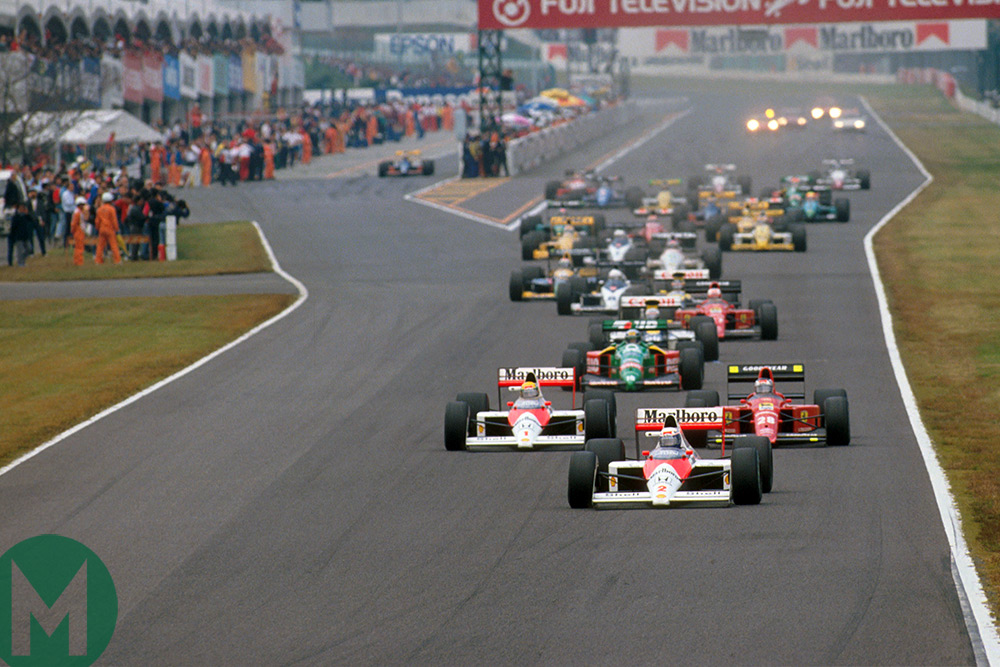 1938 Donington Park hosts the German Grand Prix teams for the second time. Postponed by three weeks due to the Munich crisis, the race was won by Tazio Nuvolari’s Auto Union after the great man recovered from an extra pitstop to change a spark plug. Hermann Lang was second for Mercedes despite fading brakes with team-mate and local hero Richard Seaman third after losing a lap when he spun on oil approaching the Old Hairpin.

1989 The Japanese Grand Prix is dominated by the McLaren-Hondas of Alain Prost and Ayrton Senna. Senna was 1.730sec quicker than his rival in qualifying but it was Prost who made the better start and still led with six laps to go. Needing to win to keep his title hopes alive, Senna attempted to pass into the chicane but was hit by Prost’s MP4/5. The Frenchman was out but Senna rejoined, replaced his broken front wing and retook Alessandro Nannini’s Benetton to win on the road. However, Senna was controversially disqualified for returning to the track at the wrong place. Prost was therefore confirmed as world champion for the third time, with Nannini winning a GP for the only time.

1966 Double Champ Car champion and Paralympian gold medalist Alex Zanardi is born. The Italian started 41 Grands Prix for Jordan, Minardi, Lotus and Williams but it was in America that he enjoyed motor racing success – winning back-to-back CART titles in 1997 and 1998 for Chip Ganassi Racing. He was seriously injured when the series visited the Lausitzring in 2001 with both legs amputated above the knee. He returned to touring car racing and enjoyed success in a new sport – Zanardi winning handcycling gold medals in the 2012 and 2016 Paralympics.

Related: “I’ve started to think the accident was the greatest opportunity of my life”

1994 Dale Earnhardt wins the AC Delco 500 at Rockingham to clinch the NASCAR title for a record-equaling seventh time in 1994. His Richard Childress Chevrolet Lumina beat Rick Mast’s Hoosier-shod Chevy to the line by 0.06sec to tie Richard Petty’s title haul.

1965 The Mexican Grand Prix signals the end of the 1.5-litre era and proves a significant event for Richie Ginther, Honda and Goodyear. The American qualified on the second row and passed the pole-winning Lotus of Jim Clark on the opening lap. Ginther was never headed again as he scored a first victory for driver, team and tyre company alike. Dan Gurney’s Brabham-Climax gave chase throughout, but he finished 2.89sec adrift of his countryman after 65 laps of México City.

1971 Grand Prix winner and sports car star Jo Siffert is killed during the non-championship Victory Race at Brands Hatch. Siffert qualified on pole position for BRM but made a poor start and was running fourth when he crashed on the approach to Hawthorn. The race was abandoned with BRM team-mate Peter Gethin declared the winner of the unhappy event.

1976 Heavy rain makes conditions treacherous for the Japanese Grand Prix at Fuji. Niki Lauda (Ferrari) entered the race with a three-point advantage over McLaren’s James Hunt but the Austrian withdrew after two laps of the race, believing conditions to be too dangerous to race. Needing to finish third to snatch the title, Hunt led until a drying track forced him to pit for new rubber with five laps to go. He recovered from fifth position to take the crucial third place and the world title on his penultimate lap. Mario Andretti scored Lotus’s first victory for two seasons, with Patrick Depailler’s six-wheel Tyrrell second.

1964 Graham Hill, John Surtees and Jim Clark enter the Mexican Grand Prix with the chance of winning the world championship. Third would have been enough for Hill to prevail and he was running in that position when he was rammed by Lorenzo Bandini’s Ferrari. Clark started from pole position and was on course for victory and the title when he retired on the last lap, handing victory to Dan Gurney’s Brabham. Bandini slowed to let Ferrari team-mate Surtees finish second and beat Hill to the championship by a single point. Surtees remains the only man to win the world championship on two and four wheels.