This week’s major milestones from history, via the database 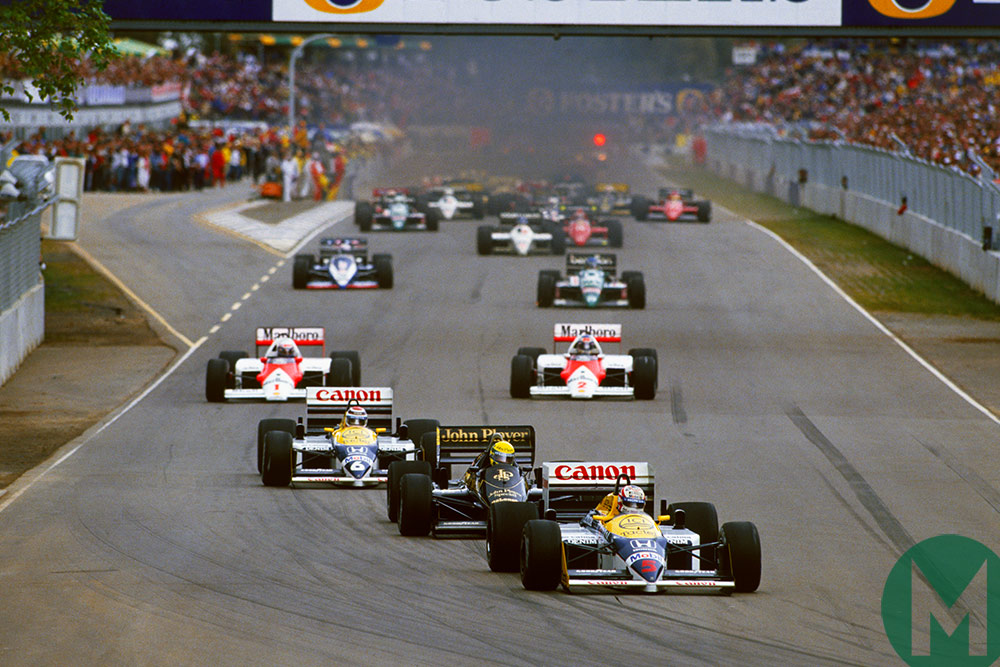 1986 The 1986 Formula 1 World Championship was decided on this day in Adelaide after a dramatic three-way title fight. Nigel Mansell entered the race with a points advantage over McLaren’s Alain Prost and Williams team-mate Nelson Piquet. The Englishman was running in the third position that would have delivered the title when his rear tyre punctured at high speed on the Dequetteville Terrace to spectacularly end his hopes. Race leader Keke Rosberg (McLaren) had exited in similar fashion on his last appearance before retirement so Piquet pitted as a precaution leaving Prost, who had fresher rubber due to a previous puncture, to cruise to victory and a second world title.

1997 For the second time in four years, the world championship was decided by a collision on this day in 1997, but this time Michael Schumacher was not the beneficiary. He crashed into Jacques Villeneuve’s Williams as his Canadian rival moved for the lead on lap 48 of the European Grand Prix at Jerez. Schumacher was out but Villeneuve was able to drag his damaged car to the line in third position to snatch the title. The FIA excluded runner-up Schumacher from the 1997 standings for deliberately driving into a rival. Mika Häkkinen and David Coulthard passed Villeneuve on the last lap with the Finn a GP winner for the first time.

1991 The World Sportscar Championship visited the remote Japanese circuit at Autopolis for the only time in 1991. Teo Fabi arrived for that season’s last race with a 10-point lead over Jaguar team-mate Derek Warwick with Peugeot’s Philippe Alliot and Mauro Baldi five points further adrift. Fabi qualified on pole position and finished third with co-driver David Brabham to clinch the title. The Peugeot was delayed and Warwick, driving solo, finished second but it was not enough. The race was won by the Mercedes of young Formula 1 drivers Karl Wendlinger and Michael Schumacher.

2013 It is five years since Red Bull’s Sebastian Vettel won the Indian Grand Prix to clinch the World Championship for the fourth successive year. He celebrated with a series of spectacular doughnuts that landed a $25,000 fine from the FIA. Team-mate Mark Webber retired so Nico Rosberg’s Mercedes finished second, almost 30sec behind his countryman. 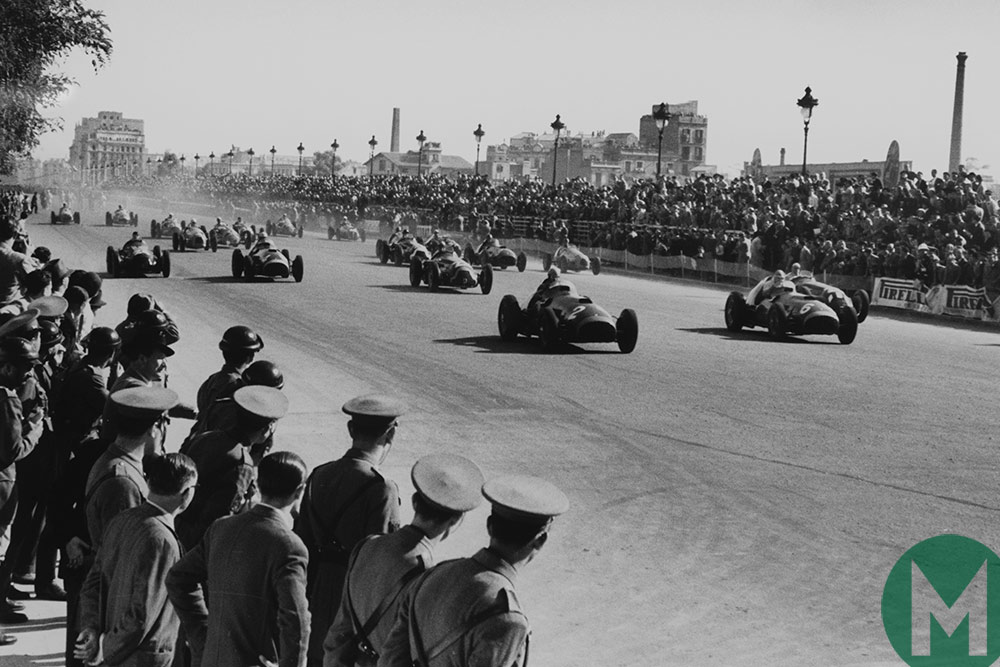 1930 Today is Bernie Ecclestone’s 88th birthday. Formula 1’s ‘ringmaster’ for 40 years, Ecclestone raced in 500cc Formula 3 during the 1950s and was Jochen Rindt’s manager a decade later. He acquired Brabham in 1972 and Nelson Piquet won the 1981 and 1983 World Championship for the team. Ecclestone was instrumental in reshaping the sport in his role as chief executive of the Formula 1 Constructors’ Association and then as its commercial rights holder from 1995 to 2017.

1951 The 1951 Spanish Grand Prix (above) on the streets of Barcelona’s Pedralbes district provided the scene for that year’s Formula 1 decider between Alfa Romeo’s Juan Manuel Fangio and Ferrari team leader Alberto Ascari. Ferrari had won the last three GPs and Ascari qualified on pole position but an incorrect choice of wheel size led to their tyres overheating on race day. All four Ferraris suffered delaminating tyres during the early laps so Fangio eased to victory and his first world title. José Froilán González was second for Ferrari with Giuseppe Farina (Alfa Romeo) third. Ascari recovered to finish fourth but was six points adrift in the final standings.

1991 Alain Prost joined Ferrari in 1990 with the hope of beating arch-rival Ayrton Senna but he was dropped with immediate effect on this day in 1991 after a dismal winless season. Openly critical of the team as it could not match either McLaren or Williams that year, Prost’s relationship with management deteriorated to the point that he was replaced by Gianni Morbidelli for the final race of the season in Australia.

1906 Inaugural Formula 1 world champion Giuseppe Farina (below) was born in Turin on this day in 1906. He won half of the six Grands Prix during that 1950 season to beat Alfa Romeo team-mate Juan Manuel Fangio to the title. Farina scored another two such victories before retiring from the category at the end of 1955. He made a couple of ill-fated attempts to qualify for the Indianapolis 500 before giving up the sport completely two years later. He died in a road accident on the way to the 1966 French GP.

1988 Pole winner Ayrton Senna recovered from a poor start and 14th position to win the Japanese Grand Prix to clinch the 1988 World Championship, 30 years ago today. McLaren team-mate Alain Prost was no match for the Brazilian when it drizzled and the double champion finished 13.363sec behind. Thierry Boutsen was third for Benetton and Ivan Capelli’s Leyton House March-Judd briefly led before retiring. 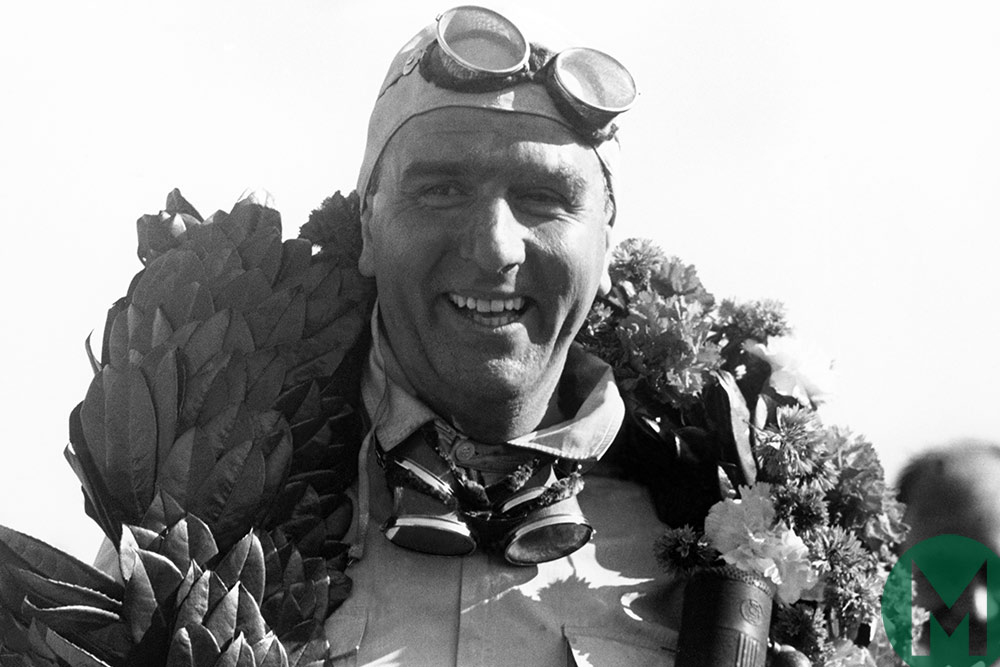 1941 British sports car star Derek Bell celebrates his 77th birthday today. Bell started nine Grands Prix and is a race winner in Formula 2, and he won the Le Mans 24 Hours on five occasions. He took the World Sportscar champion in 1985 with Hans-Joachim Stuck and solo in ‘86. The 1971 Buenos Aires 1000Kms was the first of 21 victories in endurance championship races. He remains active at historic festivals and was inducted into the Motor Sport Hall of Fame in May 2016.

1962 Local hero Ricardo Rodríguez was killed during practice for the inaugural non-championship Mexican Grand Prix in 1962. Already a works Ferrari driver, the 20-year-old won the Targa Florio and finished fourth in the Belgian Grand Prix that year before driving a Rob Walker Racing Lotus 24-Climax at México City. He had just lost pole position on the first day of practice when he returned to the track only to crash in the 180-degree Peraltada corner with fatal consequences.

1998 It is 20 years since Mika Häkkinen clinched his first World Championship at Suzuka. Title rival Michael Schumacher qualified on pole for Ferrari but he stalled on the grid so started from the back. Needing to finish in the top two to have any chance of snatching the title, Schumacher carved his way through the field to third position before a puncture ended his race. Now confirmed as champion, Häkkinen beat the second Ferrari of Eddie Irvine by 6.491sec with McLaren team-mate David Coulthard third.

1946 1980 Formula 1 world champion Alan Jones turns 72 today. This gritty Australian won the 1977 Austrian Grand Prix for Shadow but it was with Williams that he emerged as the class of the field – winning four times in 1979. Third overall that year, he scored another five victories in 1980 to beat Brabham’s Nelson Piquet to the World Championship. He retired at the end of 1981 before making unsuccessful returns with Arrows and Haas Lola.

2008 Needing to finish fifth to clinch the title in his second Formula 1 season, Lewis Hamilton appeared to have lost out when a late shower forced him to change to wets, slipping out of the top five when passed by Sebastian Vettel’s Toro Rosso. With Ferrari rival Felipe Massa scoring the emotional home victory required to claim the title, Hamilton entered the final lap 13 seconds behind Timo Glock’s dry-shod Toyota but passed the German on the last corner to win the world championship for the first time.