This week’s major milestones, via the Archive and Database 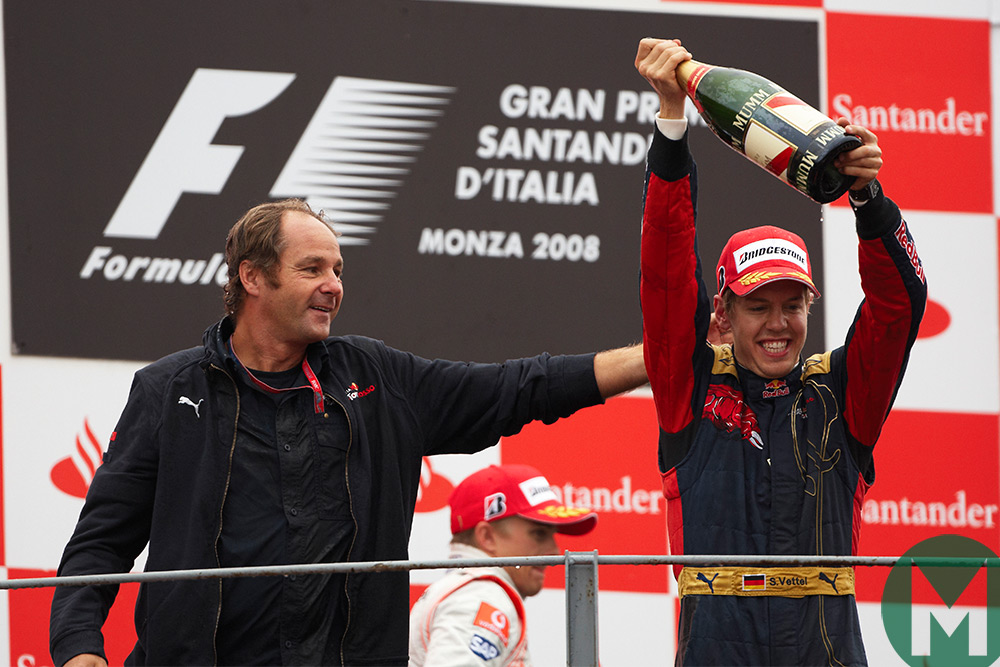 2008 It is 10 years since Sebastian Vettel converted a surprise pole position into victory for Scuderia Toro Rosso at a very wet Monza. That established a new record for the youngest Grand Prix winner to date and was the first, and so far only, win for the team formerly known as Minardi. Heikki Kovalainen qualified and finished second for McLaren-Mercedes but no one could touch Vettel that day.

1881 Famed Italian/French car manufacturer Ettore Bugatti was born into an artistic family in Milan. He established his company in the Alsace town of Molsheim, near Strasbourg, in 1910 and resumed manufacture when World War II ended. Bugatti was among the leading Grand Prix marques of the 1920s, with the T35 dominant by the end of the decade. Bugatti won the Le Mans 24 Hours in 1937 and 1939 but its founder died in Paris in 1947, after which Motor Sport noted that “the motoring world has lost one of its most picturesque, best known and yet most enigmatic personalities.”

1924 Meteoric American star Jimmy Murphy was killed at Syracuse. Murphy only raced for five years but he achieved much during that time. He was the first American to win a Grand Prix when he triumphed in the 1921 French GP for Duesenberg (below). He qualified on pole position and won the following year’s Indianapolis 500, leading 153 laps. National champion that year, he was on course to repeat that success when he crashed at Syracuse while trying to pass Phil Shafer for the lead. Murphy had amassed enough points by that time to be posthumously awarded a second national title at the end of the season.

2007 The first British driver to win the World Rally Championship, Colin McRae lost his life in a helicopter accident near his home. His five-year-old son and two family friends were also killed. The son of five-time British Champion Jimmy, the younger McRae won 25 WRC events between 1993 and 2002 and secured the 1995 title when driving for Prodrive and Subaru. 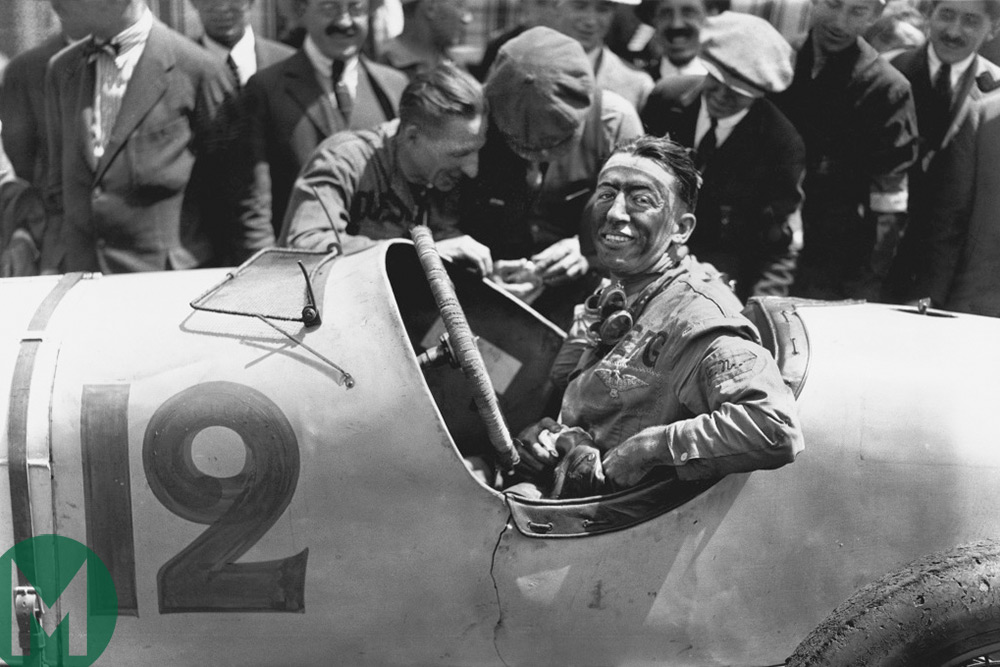 1888 This is a week for influential car makers for Walter Owen (“W.O.”) Bentley was born in Hampstead. He formed Bentley Motors with his brother in 1919 and a privately-entered Bentley won the 1924 Le Mans 24 Hours. A works team was entered in 1925 without success that year or the next. Bentley ended the decade as the class of the Le Mans field – winning for four years in a row from 1927-30. Despite that success and Wolff Barnato’s investment, Bentley Motors was in financial trouble at the time and its assets were acquired by Rolls-Royce in 1931. W.O. died in 1971.

2001 The Italian Grand Prix was overshadowed by the recent terrorist attacks on New York’s Twin Towers and Alex Zanardi’s terrible injuries suffered during the Lausitzring Champ Car race. Juan Pablo Montoya’s Williams-BMW qualified on pole position (his third in four races) and the Colombian scored his breakthrough Formula 1 victory after Rubens Barrichello’s Ferrari was delayed while refueling. Montoya’s team-mate Ralf Schumacher beat a subdued Michael Schumacher into third – the Ferrari driver had attempted to persuade the grid ‘not to race on the opening lap‘.

1929 Four-time Formula 1 runner-up, Sir Stirling Moss was born. The son of a dentist – also a sometime racing driver – Moss made his Grand Prix debut in 1951 and starred with a privately-entered Maserati 250F during 1954. That earned promotion to Mercedes-Benz for 1955 and he won the first of 16 Grand Prix victories at that year’s British GP. He raced for Maserati in 1956 before joining Vanwall for a couple of seasons. Moss finished second in the championship from 1955-58 and was third in 1959 when driving Rob Walker’s Cooper-Climax. There was sports car success as well with the 1955 Mille Miglia, with Motor Sport’s Denis Jenkinson alongside, a highlight of his 12 World Sportscar Championship race wins. Moss was forced to retire when he was injured at Goodwood in 1962.

1955 Stirling Moss celebrated his 26th birthday by winning the RAC Tourist Trophy at Dundrod with John Fitch and a Mercedes-Benz 300SLR. It was a dominant day for the German marque with Juan Manuel Fangio/Karl Kling and Wolfgang von Trips/André Simon/Kling completing a 1-2-3 finish. Moss led from the start but dropped to third when he punctured a rear tyre. He caught and passed Kling and Mike Hawthorn’s Jaguar D-type before the latter’s engine expired on the penultimate lap. The race was marred by three fatal accidents and Dundrod was not used again.

1960 Damon Hill was born on this day, the son of Formula 1 driver and future double World Champion Graham. Damon was a late convert to car racing but he joined Williams as test driver in 1991. His F1 debut during the following season came with an uncompetitive Brabham. Hill replaced Nigel Mansell in the Williams race team in 1993 and was winning races by the end of the season. He battled Michael Schumacher for the title in 1994 after leading the team when Ayrton Senna was killed at Imola. Hill finally won the title in 1996 but was not retained for 1997. A disappointing season with Arrows was followed by a last victory during a couple of final seasons with Jordan.

1975 Stock car racing superstar Jimmie Johnson was born in California on this day in 1975. He became the first driver to win five titles in a row as he dominated the Cup from 2006-10 and has since added another couple of titles. He made his senior NASCAR debut for Rick Hendrick in 2001 and he continues with the team today.

1989 Mauro Baldi and Kenny Acheson won the Spa 480kms for Sauber-Mercedes. The Italian was in particularly fine form, taking pole position and surviving contact with Vern Schuppan to establish a race-winning lead. That closed Baldi to within five points of team-mate and championship leader Jean-Louis Schlesser who lost second when he ran out of fuel on the last lap. Bob Wollek and Frank Jelinski therefore inherited second for Joest Racing.

1948 The Goodwood Motor Circuit opened 70 years ago with an eight-race card. P.de F.C.Pycroft’s Pycroft-Jaguar led the first race for closed bodied normally aspirated 3-litre sports cars throughout its three laps. Other race winners that September day included Stirling Moss (his first ever victory on a racing circuit, above), Dennis Poore and Reg Parnell.

1992 Then-reigning world champion Nigel Mansell announced that he was defecting to the IndyCar World Series rather than defend his Formula 1 crown. Unhappy that Williams was signing Alain Prost for 1993, Mansell instead joined Newman-Haas Racing with immediate success. Victory on his debut in Surfers Paradise was one of five wins as he clinched the IndyCar title.

1909 Designer and car constructor Ferry Porsche was born in Vienna in 1909. The son of Ferdinand Porsche who was chief engineer for Austro-Daimler, Ferry Porsche worked for his father before building his own lightweight sports car in 1948 – the Porsche 356. His new marque was soon successful at Le Mans with a 356 winning its class in 1951. Porsche died in 1998 but the marque he established remains the most successful in that sports car classic with 19 outright victories to date.

1971 The Canadian Grand Prix was held at a wet Mosport Park. Jackie Stewart (Tyrrell-Ford) and Ronnie Peterson (March-Ford) diced for the lead until the Swede hit a backmarker on lap 32. That left Stewart to win by half a minute ahead of the delayed Peterson. Mark Donohue finished third on his Formula 1 debut in a Penske-White Racing McLaren-Ford.

1873 Ferenc Szisz, the winner of the first Grand Prix – the 1906 Grand Prix de l’Automobile Club de France – was born in Hungary. Szisz’s Renault AK beat Felice Nazzaro’s Fiat by more than half an hour after two days of competition on the streets around Le Mans.

1970 A new marque made a sensational Formula 1 debut on this day in the Canadian Grand Prix. Jackie Stewart qualified the new Tyrrell 001-Ford on pole position and led for the opening 31 laps of St-Jovite before his stub-axle broke. That left Jacky Ickx to lead Clay Regazzoni in a Ferrari 1-2 as he maintained an outside chance of beating Jochen Rindt’s points tally.