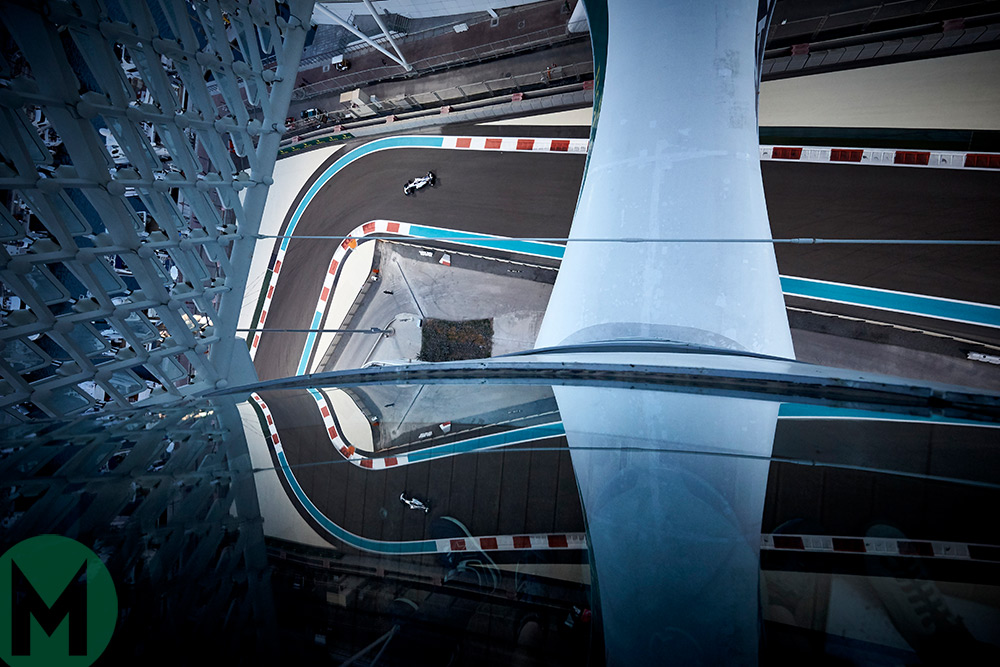 I think we can all pretty much agree that this year’s race will not go down in the history books as an all-time classic.

It’s a funny one actually, because at this track we’ve had plenty of drama – in 2010, for example, and last year with the battle between Nico and Lewis, which was interesting and intriguing in the big picture of the World Championship. But if we look at the races on their own as individual races, in both those instances the drama came from people not being able to overtake. Essentially, Nico wasn’t able to pass Lewis last year and going back to 2010 the drama came from Fernando Alonso and Mark Webber not being able to pass people like Vitaly Petrov and come through the traffic.

So I’m not quite sure that the track layout itself provides an exciting end to the World Championship. They’ve got a lot of options in terms of tracks, and that’s something that needs to be looked at.

We want a finale where people are fighting and really attacking each other on the race track and we’re not trying to look too hard to get a story out of it.

We had a race, however, and Valtteri Bottas showed great strength and character by winning. If you look at his performances since the summer break he’s really struggled relative to Lewis. Since Monza, and Spa – all through that bad run of races – he struggled, and in Interlagos it was the first time we started to see signs of a recovery with pole position. He was absolutely gutted not to win the Grand Prix, but at least there was a sign that he was starting to rediscover that form.

Honestly, in the first half of the year, he was one of the real standout performers. His qualifying laps in Monaco, race performance in Russia and in Austria were both very, very convincing, and I was very pleased to see how his first half of the season had gone.

This weekend in Abu Dhabi was really strong for him. He looked a little bit behind Lewis through free practice, but he worked at it and chipped away, and when it came to qualifying he did what we’re used to Lewis doing. When it got to Q3, he took it up a notch and that lap he did on the first lap of Q3 was pretty special – right up there with some of the best qualifying laps we’ve seen this season.

Lewis piled on the pressure, and when it came to the final laps he couldn’t improve enough and that was a big marker for Valtteri, to beat Lewis in a street fight. Don’t forget, he didn’t get to do that in Brazil after Lewis’ accident. When he spoke post-qualifying at Interlagos he said, “I regret not having Lewis here because I think it would’ve been a great battle,” and this weekend showed that it was a great battle, with hardly any time between them.

In the Grand Prix he did a really good job again. Toto said to me before the race that they were free to race – he was going to let them run flat-out – with absolutely no team orders to race for victory and fight each other.

Valtteri delivered a faultless start, but after the pitstop, Lewis really ramped up the pressure. He sat there on his gearbox and got within DRS a couple of times, but Bottas responded beautifully. He didn’t crack under pressure and if we look at the races he’s won this year – Russia, Austria and here – on every occasion he’s had a four-time world champion hunting him down, keeping him under pressure and on none of the occasions did he crack.

Hats off to him. It’s a great way to go into the winter and it will give him a lot of confidence; it shows great strength and character to deliver when the chips are down.

This is a similar thing I talked about earlier this season with Stoffel Vandoorne. When things were going against him, it would’ve been so easy to crumble under the pressure of being Fernando Alonso’s team-mate and just become a number two, but he responded from Silverstone onwards and really pushed Fernando hard and I thought the same of Valtteri, so really well done from him.

Ferrari, from what I understand, shouldn’t really read too much into the gap of being 20 seconds back because when you watch the race they just went further and further backwards from the Mercedes, but then towards the end Sebastian unleashed the fastest lap of the Grand Prix on lap 55.

Valtteri ultimately went quicker than Vettel, but for the last five or six laps Sebastian showed some really strong pace and you wonder where that was throughout the race. I was led to understand afterwards that Ferrari had to do a reasonable amount of fuel management and energy saving in the early stages of the Grand Prix, and towards the end their drivers got let off the leash once Ferrari knew they were going to make it to the end of the race.

It is a tough race here for fuel and, don’t forget, we’re at the end of the season so the last engine and power components are being used with compromises having to be made. I don’t think we should read too much into Ferrari’s performance, or lack thereof, in the early stages of the race.

From Red Bull’s standpoint, it was another reliability problem for Daniel Ricciardo and so it’s something that, collectively between Milton Keynes and the Renault side, they have to work that out – they are championship contenders.

On the whole, I really enjoyed the season, with three teams fighting it out and, when we look back at the year, Ferrari came out perhaps stronger than a lot of people expected. Red Bull struggled in the first half of the year but came out strong towards the end.

Next year McLaren will have the Renault power unit so the key point is all eyes have got to be on what Renault can deliver in 2018. If it can deliver a power unit that’s competitive in terms of power and is reliable, we could potentially have eight cars and four teams fighting for race victories.

Ferrari, hopefully, will be stronger; Mercedes is unquestionably going to be the favourite going into next season.

Apart from the halo, we’ve got pretty stable rules, especially in terms of the aerodynamics, so I really, really hope for the sake of F1 that the guys at Viry can deliver.

Speaking of Renault, and taking a step back to Abu Dhabi, that was the biggest subplot of the whole race with Renault securing sixth place in the constructors’ championship.

People at home might say ‘well what’s the big deal with sixth place, they’re a manufacturer team. They should be there’, but the difference between sixth and seventh is probably in the range of eight to nine million US dollars which is a significant sum of money.

For Haas to lose that sum of money is a pretty big hit, and while it may be less of a percentage for Renault, it’s still seven to eight per cent of Haas’ budget, which is not insignificant, so I’m sure Haas is pretty gutted about that.

Did Vettel lose the title?

When you add up the points for front wing damage in Canada against Max Verstappen; Sebastian not pitting at Silverstone and getting a late puncture (when I think they could have pitted, had a safe pitstop and still finished fourth); Sebastian’s moment of road rage at Baku when he deservedly got a penalty; in Singapore when Ferrari should’ve had at least two cars on the podium and Lewis would have probably finished fourth, they lost a ton of points there; in Malaysia with a grid penalty, starting from the back; and the power unit failure in Japan from the front row, you could say that Sebastian lost 97 points this year.

That’s a huge load of points, and if they’d even saved half of those Vettel would’ve been champion this year. I know Lewis had headrest issues at Baku and a gearbox penalty in Austria, even hypothetically it’s clear that Ferrari gave away a lot more points than Mercedes.

On the whole, Ferrari and Sebastian probably lost that championship at least as much as Lewis won it. Lewis was stellar this year, particularly qualifying in Malaysia, Britain and Japan to give himself track position to score the points, which he needed. He’s been brilliant and error-free apart from that qualifying mistake in Brazil.

Ultimately, the best driver won the championship but there is a good argument that Sebastian and Ferrari lost it.

Anyway, I hope you’ve enjoyed my columns here on Motor Sport throughout the season, and I look forward to seeing you in the New Year.