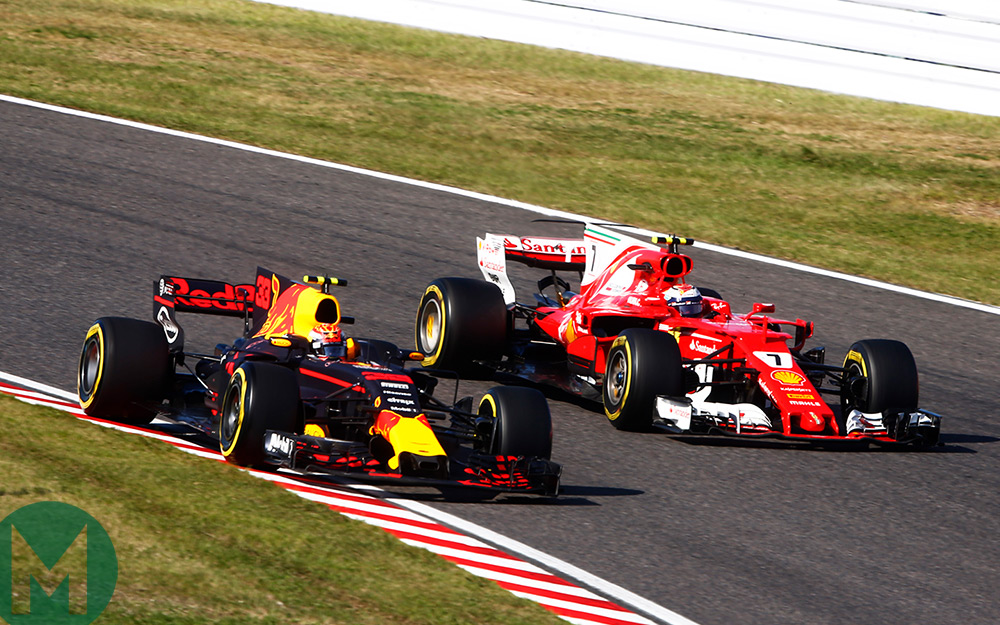 In the end it was a bit of an anti-climactic race for the second time in a row. I couldn’t believe it when I got to the grid and the engine cover was coming off Seb’s car. It was quite clear things were not normal. Ferrari was saying it will all be fine but that wasn’t the case, as we found out on lap one.

It’s hugely disappointing, if you look at the whole Asian adventure, Singapore, Malaysia and Japan have absolutely destroyed Ferrari’s championship hopes. Combine that with Monza, when they were far off the pace compared to the Mercedes guys, and that’s basically four races since Spa in which the championship has just gone down the road.

It’s a shame for Sebastian, who has driven well but ultimately the Ferrari isn’t as quick a car on the Saturdays. But he was starting from the front row and the Merc wasn’t that quick in race trim relative to the Red Bulls, so Seb would have been in the hunt.

What can you say about Lewis? He was in devastating form yet again in qualifying, and it was really nice to see the 2017 cars at Suzuka. Those high-speed direction changes around Spoon Curve and 130R were pretty mighty to watch. When you watch Lewis’s onboard lap it was one of those where you take a step back and go ‘phwoah, that was impressive.’ He put it all on the line and Valtteri was nowhere close to him, which shows what a superb qualifier Hamilton is.

Come the Grand Prix it wasn’t as easy, for a variety of reasons – they say because of the straightline speed but I’m going to analyse the data a bit more before Austin. The Red Bull couldn’t get to within six tenths to maybe a second in qualifying, but come the Grand Prix Max was there. He was able to sit within a couple of seconds of Hamilton, but realistically I don’t think there was ever really a chance he could pass Hamilton. Max’s race pace is fine and if he had started at the front then he would have had the opportunity to win the Grand Prix.

The foundations of the Merc victories are laid in those amazing qualifying performances. When you look back at the weekend, Lewis was absolutely stellar. There are no more words to describe it. He is well on his way to becoming a four-time world champion, it’s a case of when rather than if.

It was ridiculous in qualifying on Saturday. We were wandering around the paddock speaking to different teams and people just trying to work the grid out. Nobody had a clue. It is really frustrating that we’re in this situation where nobody at the chequered flag can conclusively tell us what the grid order is. We had Valtteri and Kimi out of contention with gearbox penalties, so I believe they need to find another solution. That could be constructors’ points, or if we think somebody is going to change a gearbox or engine then make them qualify with a 10 or 15 kilos extra fuel load. That’s something David Coulthard mentioned to me and we thought that it might actually be a good solution. At least then everybody knows what the ultimate result is.

I thought Max was brilliant on lap one; Seb had his issues but Max was very opportunistic lunging down the inside of the hairpin. He got the move done on Daniel as well, and that was the difference between second and third. Daniel got stuck behind Ocon for a lap or two and by that stage Max was gone. Max just continues to prove he is a driver well beyond his years.

Daniel did a typically good and solid job, and finished on the podium again. It’s unquestionably the best line-up in Formula 1 today, if they can arrive in 2018 with a car that can qualify and can challenge the Mercs on power then those guys will be right in the championship hunt. Hopefully that’s something we’ll see next year.

Best of the rest?

Force India did a great job, it was a brilliant drive by both Ocon and Pérez. Ocon has come on really strong and I think they have got a really good line-up. They push each other hard, they’re two young hard racers. There’s a good balance, and the team has done a good job with the car. Williams, on the other hand, will be disappointed.

Haas had a really tough eight days between Grosjean’s big crash in FP2 at Sepang and Grosjean’s big accident in qualifying here – there were two very different reasons for those, obviously. For them to get a double-points finish is a great, great result heading into its home race at Austin. I was really pleased for Günther [Steiner] and the team because they have had an expensive and difficult period.

The final hurrah for McLaren and Honda on Honda’s home territory didn’t go particularly well, Fernando got close to a point and Stoffel didn’t get there, either. All those penalties for Fernando really ruined a good opportunity, he managed to drag the car into Q3 and that showed there was some potential but it didn’t work out.

Jolyon Palmer conducted himself really well under the circumstances. It was a tough day for him, having been announced the night before at 9.30pm that it was his last race. It must have been tough for him to get through the weekend knowing this announcement was coming. He kept it all private, handled himself well, answered the questions and took it all on the chin. He drove a good race to finish 12th, as a person – forget racing driver – full credit to him.