Karun Chandhok on the chaotic race in Baku that saw title rivals clash, team-mates collide and a teenager claim an unlikely podium 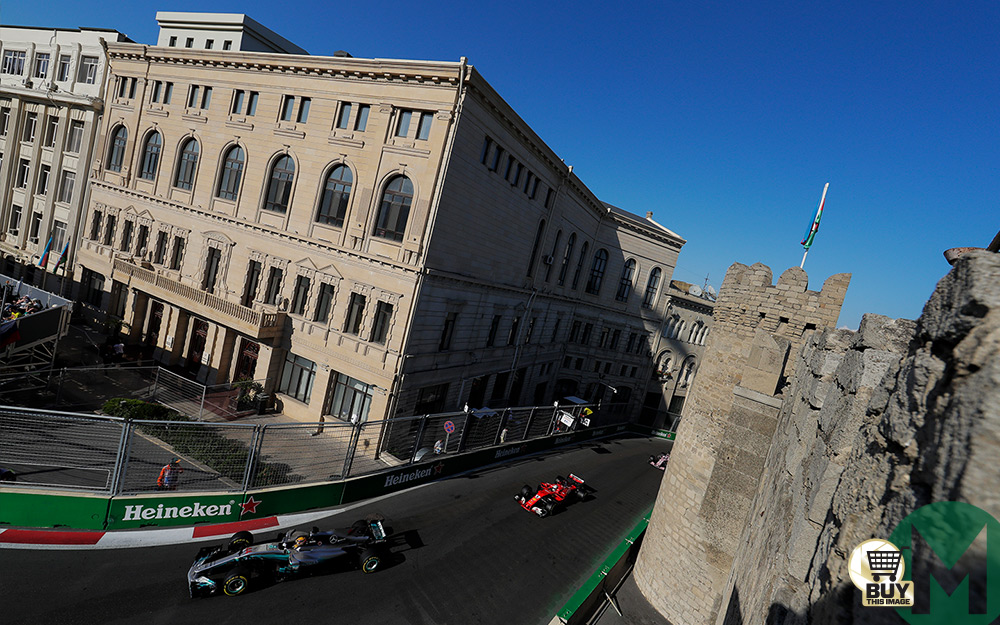 What a completely and utterly bonkers race that was in Baku. It started off pretty sedately, really. I thought this was going to be a bit of a snooze-fest and then we had the safety car and it all went completely nuts. I’m not quite sure where to begin! There was a talking point for pretty much every single team on the grid.

So let’s start at the top – Mercedes. I thought Hamilton did a brilliant job in qualifying because as the weekend was going along in free practice, he looked like he was on the back foot. Then, when we came to qualifying, he dug it out. One of Lewis’s strengths has always been braking and corner entry and I think that when the track is low-grip and when he doesn’t have that ultimate peak-grip, he’s not able to extract the best performance he wants from the combination of the tyres and the track surface. Therefore it doesn’t quite happen for him.

That’s very symptomatic of a low-grip surface; we saw it in Monaco, we saw it in Sochi and we saw it in free practice here. The temperature here in Baku dropped away very quickly as soon as the sun started to set. In qualifying the track cleared up a lot more, there’s more rubber down, the temperature drops, there’s more grip and he’s able to use that incredible feel that he’s got under braking and corner entry. His feeling is just so, so good at the point of the lock-up, where he is able to modulate the brakes. That’s been one of his big strengths and I think he did that brilliantly in qualifying.

In the race, what can you say? I think he was going to be the winner, but then that headrest came loose. It sounds like it was just a one off – it wasn’t put in place properly, probably under the red flag when he got out of the car and that cost him the win.

Title rivals clash on the restart

One of the big talking points of the race has got to be that incident with Vettel under the safety car. It was a slightly unusual situation. It’s Lewis’s perogative to control the pace, so it’s absolutely up to him to decide how fast he wants to go or how slow he wants to go under safety car once the lights are out and you’re leading the restart. He did hold a constant pace. Initially I thought not, but when I watched the replay back a couple of times he did hold a constant pace and in the end I think he slightly wrong-footed Seb.

Seb went into the back of him, which is just one of those things. It’s always difficult under safety car – cold brakes, cold tyres – and I think that was okay. But then afterwards when Seb sort of side-swiped him, that’s just out of order. I think that they were right to penalise Seb at that moment.

Lewis deserves a lot of credit for what he did on those three restarts because he did something different every time. You can’t underestimate that. We saw so many people get overtaken on the restarts as it’s such a long drag down to Turn 1. He did such a fantastic job of thinking of the right moment to accelerate to make sure he didn’t get overtaken. Even after the race, in all the interviews that he did, I thought he handled himself really well. He gave really mature answers and talked a lot about how the team has supported him, how it’s one of those things with the headrest and stuff, so I thought he dealt with the whole disappointment of not winning in Baku really well.

Ferrari just didn’t look like they were there all through qualifying – 1.1sec off is a huge tell-tale. Kimi had a scrappy race for a variety of reasons and Seb didn’t look like he could hold on to Lewis really. I think if it had been a full green race, Lewis would have blitzed it. As it turned out, I thought once they cleared the traffic after the penalties for Seb and the extra stop for Lewis, I thought Lewis would come at Seb and get past him because they had such a pace advantage. In the end he couldn’t and that was a little bit surprising, how it ended in status quo.

So it was damage limitation for both those guys and the gap going into and out of Baku has sort of stayed the same within a couple of points. It’s just another race ticked away, there’s no real big loss and for Sebastian it’s actually finished better than if they’d finished 1-2, in which case Lewis would have gained seven points. I think Seb can count himself lucky.

A few other mentions of teams – Red Bull obviously. A great win for Ricciardo. Max [Verstappen] will be absolutely gutted because he’ll feel this is a race he should’ve won. That’s three races in a row – Monaco, Canada and Baku – where he’s genuinely looked like he’s had more pace than Daniel. He’s looked like the faster of the two Red Bull drivers all weekend. In Monaco the pitstop strategy didn’t work out for him, in Canada the car broke down when he was in second place and here, again, he should’ve been the one to inherit the win when Sebastian and Lewis took themselves out of the reckoning. So he’ll be pretty gutted how that worked out for him. Anyway, a great win for Daniel. It’s always great to see him with that big smile on the podium.

A great race for Lance Stroll as well. I think he did a really, really good job all weekend. He was really good in practice and qualifying, stayed within touching distance of Felipe all through practice and out-qualified him for the first time which I thought was a really good effort for his first time here in Baku. In the race it was very mature stuff. He didn’t crack under pressure and, okay, Valtteri got him at the end, but as he came into the final corner through the second sector he was 1.2sec in front. It was just a combination of slip-stream, Mercedes engine cranked up to the hilt and DRS that was enough for Valterri to get him by a tenth of a second. I think Lance should be really proud of how he dealt with the pressure all through the race. Canada was a turning point for him and hopefully this will be another one to boost his confidence even more. I think he did a very good job all weekend.

Force India should certainly be disappointed. They would have been running one and two on the road when Seb and Lewis disappeared down the order, but instead they ended up hitting each other. I saw some very tense conversations between Bob Fernley and Checo afterwards. Watching from the outside I thought if you were Ocon you’d give your team-mate a bit more space.

I think we saw the after-effects of Canada where obviously there were a few issues between them. I think if Canada hadn’t happened in that way between those two team-mates, maybe Ocon would have been a bit more respectful of Checo. In the end Ocon didn’t leave him much space and they ended up hitting each other, which was really bad for the team. That was a big haul of points that they left on the table.

Nico Hülkenberg is another one who will be really disappointed. The place that he hit the wall was really odd; I don’t think I’ve seen anyone get close to that wall before. He seemed to get hooked up on the inside kerb and then drove into the inside wall. It was really odd. 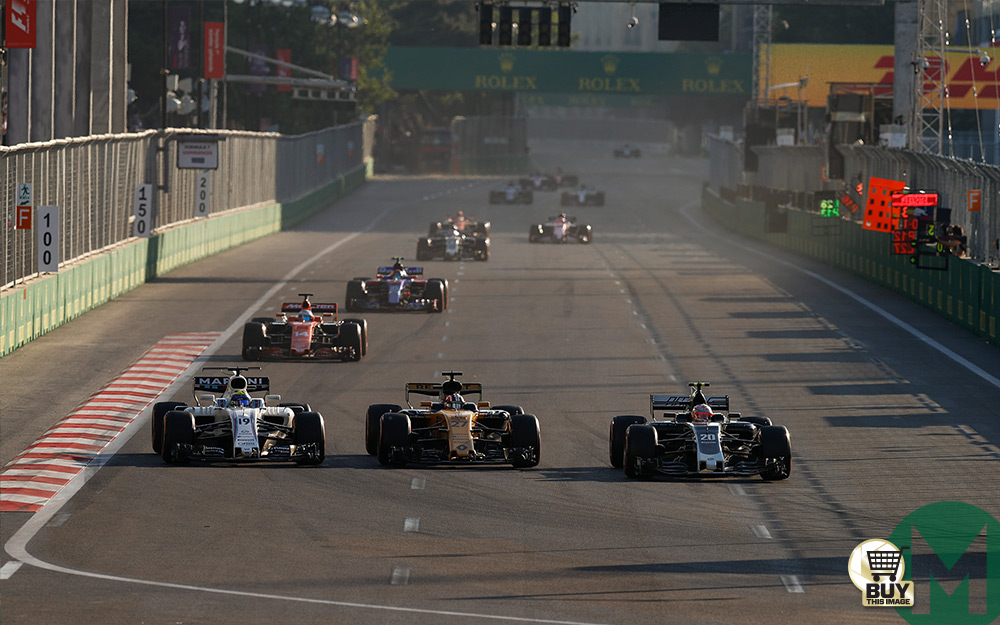 It’s interesting with Nico – he still hasn’t had a podium in Formula 1 and once again that low hanging fruit was there. We saw it so many times when he was at Force India, when a podium was available to them it was Checo who got it. Again here, there was a podium available and it was Stroll who got it, as the odd one out away from the top three teams. Nico has never been able to capitalise for whatever reason on those big results. He’ll be pretty disappointed with how today panned out, because he was in for a good haul of points, which would have been useful for Renault.

I think Toro Rosso would have been disappointed too. Sainz spun on the opening lap and he blamed Kvyat, but I think when he looks at the replay he’ll take that back. McLaren managed to get points – finally. I’m sure they’re pretty relieved to finally get some points on the board. I’m pretty sure Fernando is amazed he finished the race, given all the reliability woes he’s had recently.

Overall, there are so many talking points, it was such a crazy race and in many ways this is the race that we were expecting to have last year in Baku, on a street circuit with extremely high speed, plenty of overtaking and a very, very unique challenge. It certainly delivered plenty for the fans.