Karun Chandhok talks through the Grand Prix and looks at where Lewis Hamilton lost his time to Sebastian Vettel. He also talks about other star performers such as Williams’ Felipe Massa and Force India’s Sergio Perez.

What a fantastic race that was. It was the third race in a row where Formula 1 2017 has delivered a really interesting battle. There’s no question about it, the Ferrari vs. Mercedes battle is going to go all the way down to the wire. Another strategic contest and lots of outside factors at play as well. Let’s start from the top.

Bottas shows his class in qualifying

I was really pleased for Valtteri Bottas getting his first pole position in qualifying. He’s a really nice guy who I’ve known for many years and it underlined that belief that Mercedes had in him to get him into the team. It didn’t quite work out on Sunday for him, but we’ll come back to that. The reality is to out-qualify Lewis Hamilton is no mean feat. It was a really good effort.

He talked me through his lap on Channel 4, for those of you who watched the coverage back home, and it was a really good lap. A couple of little mistakes, really on the edge, but overall he should be pretty pleased with that. I know he was a bit disappointed on Sunday, but qualifying was a really good effort.

Ferrari was the big surprise of qualifying, how far back they were compared to Mercedes. I think they were surprised as well. It’s interesting how in the first two races they were right up there, but for whatever reason – temperature, circuit-related differences – no one could really pinpoint it. We haven’t really got enough of a data set to draw a trend – we need to see a few more races.

Also the cars are evolving with updates. Ferrari had a new front wing, which we saw on Friday in free practice. It’s a constantly moving goal post and I think that’s really interesting.

Red Bull did a good job in free practice and qualifying. They were definitely closer this weekend than they had been in the first couple of races. When I flew out of London on Wednesday night to get to Bahrain Thursday morning, there was a guy from Red Bull checking into the flight right next to me. He had the porters lined up with huge boxes of bits that he was carrying out to Bahrain. It’s really interesting to see them pushing on as well. 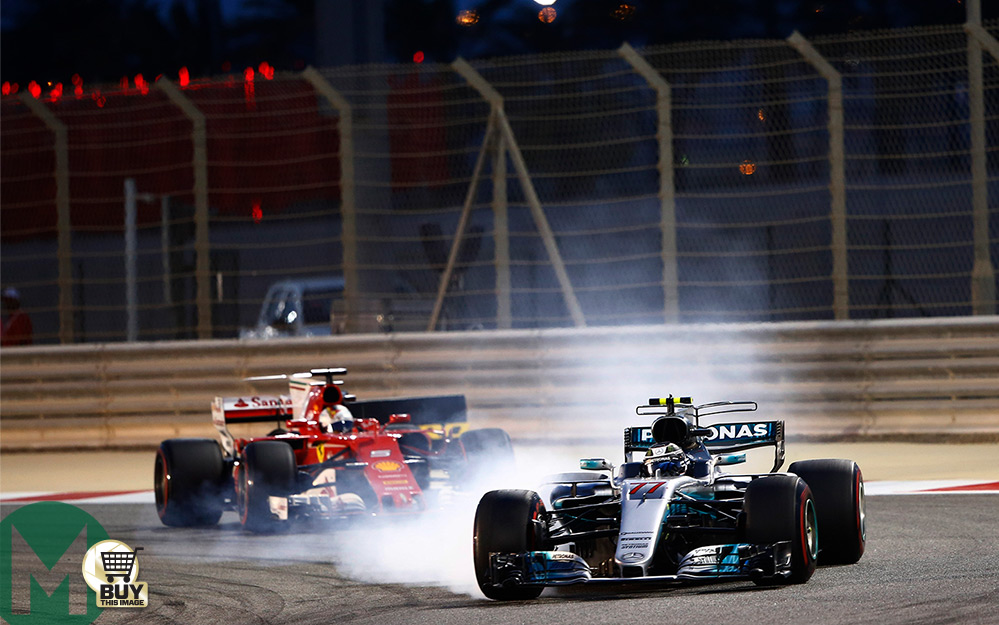 Renault best of the rest

Nico Hülkenberg was the other star of qualifying. It’d be remiss not to mention his performance in qualifying, which was very, very good – the best of the rest. When you look at FP2 and the Grand Prix, they don’t seem to have the race pace to match Williams or Force India and I think that’s something they’ll be working on. But a really good job by Nick Chester, Alan Permane and the technical team there.

They’ve worked with Nico and he’s given them some set-up direction and guidance on which way they want to head with the car to unlock its potential. To be best of the rest on the grid, backing up his seventh place from Shanghai, was a very good effort in qualifying.

A strategy rethink at Mercedes?

In the Grand Prix we had Lewis starting on the dirty side, which hampered him, and then we had Bottas and Seb up front. Valtteri seemed to be really struggling. Mercedes talked about the fact that they weren’t able to set the right tyre pressures on his first set of tyres and that hampered his first stint. Even beyond that first stint, he didn’t seem to have the pace of Lewis or Sebastian.

That’s interesting. Is that a clear sign that Mercedes needs to start favouring Lewis when it comes to strategy calls and decision-making? Mercedes is very good and very conscious of being unbiased to one side of the garage. It has done it in the past with Nico and Lewis where it tried really hard to be fair and equal.

Now though they’re in a different dynamic and a different world championship battle. They’re fighting against another team and the enemy is no longer within, it’s outside. You do wonder if they need to start rethinking their approach in terms of favouring one driver over the other.

I’m sure it’s a hard decision. It’s early in the season to resign one driver to a number two status, but maybe that’s what it’s going to take. Look historically, back in ’86 Nelson Piquet and Nigel Mansell were fighting each other for Williams and it was Prost that snuck into the world championship. There have been a few occasions when drivers in the same team have been taking points off each other and ultimately allowing someone else to come through. It’s a very tricky situation for Mercedes to deal with.

In the opening part of the Grand Prix, Valtteri didn’t have the pace to pull away. You could see all the way down to sixth, in fact, with Max and Daniel – there were five of them in a train. Ferrari bit the bullet and went for the undercut. You do wonder in those sorts of instances, if Valtteri had the tyre pressure issue, which was really hampering him, why didn’t Mercedes pull him in? Or, on the flip side, why didn’t they pull Lewis in and give him an undercut? He perhaps could have jumped both Sebastian and Valtteri.

I was looking through some lap times when I was replaying the race and trying to understand it on the live timing data. When Vettel pitted, Valtteri’s time on that lap was a 1:37.6 and Vettel came out 23.2sec behind. But then Mercedes curiously left its cars out and over the next couple of laps the gap came down 20.5sec, 18.0sec and by the time the safety car came out on lap 13, Valtteri was only 16.1sec ahead of Sebastian.

If there had been no safety car Sebastian would have come out seven seconds up the road. In effect, the safety car actually helped the Mercedes drivers close and they actually made seven seconds if you look at the times in the middle sector of the lap. Valtteri did a 42.4sec middle sector; Seb did 49.1sec. So in that one sector alone they gained seven seconds, let alone the last part of the lap. Despite the safety car, Ferrari still managed to get track position and the decision-making around that three-lap phase was really the critical moment of the Grand Prix. 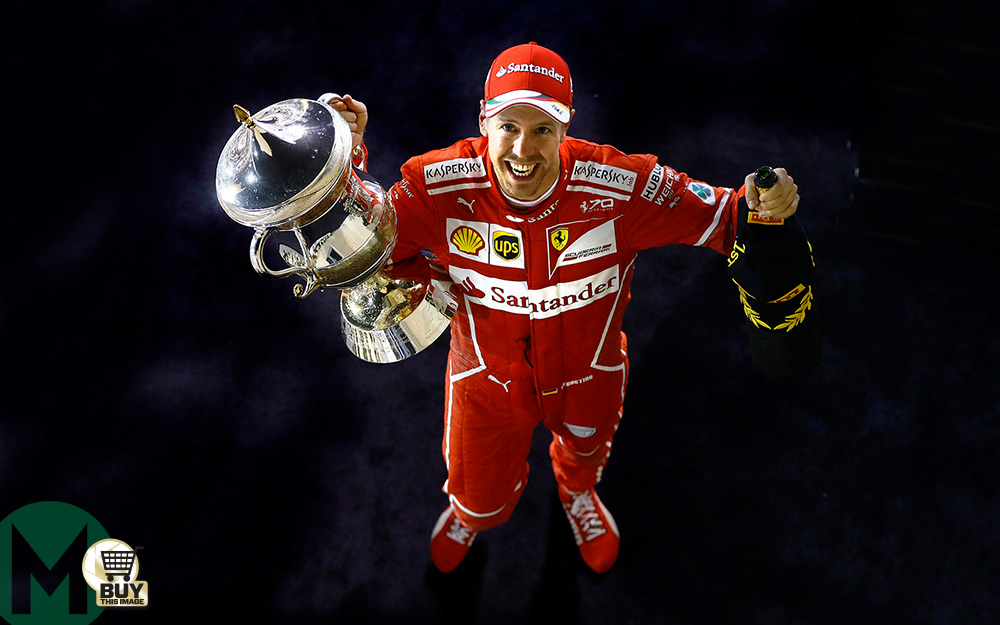 In hindsight, Mercedes will wonder if it should have gone for a more aggressive undercut. We knew the soft tyres were hanging on and when in the end they pitted three laps later, it was fine. I think that’s something they need to think about going forward and I’m sure they will. There are some extremely clever people on that Mercedes pit wall with James Vowles, a great strategist, Andrew Shovlin, the chief engineer, Pete Bonnington, Tony Ross, the two race engineers. There are some very, very clever people there and I’m sure they’ll work it out.

Fundamentally I believe it’s a philosophical issue of do we carry on in terms of fairness and letting the driver in front have first call etc., or do we start to favour one driver over the other and use that tactic to combat Sebastian?

Once again Sebastian does what he does best. When he gets out front he’s gone and that’s why the guy has won so many Grand Prix. He knows how to win races; he managed that gap to Lewis.

I think Lewis did exactly what any racing driver in the world would have done, when it came to backing up Daniel into the pitlane. The mistake he made was perhaps not backing Daniel up enough before the pit entry line.

Daniel did an interview with us on Channel 4, where he talked about the fact that before the pit entry line you can slow down, but once you’ve crossed the pit entry line in the pitlane itself, you can’t slow somebody down. When you look at the pitstop times, Vettel’s total pit stop time was 24.7sec. Valtteri lost time because he had to let the traffic come past and his was 28.3sec, so he lost 3.6sec. In effect, because of the safety car, that was actually the difference between getting out ahead of Sebastian or not.

Lewis’s stop was 30.7sec, so that’s six seconds slower than Vettel and that shuffled him well out of the order, and then he got the five-second penalty.

Battles down the field and the driver of the day

It was a really good Grand Prix – fascinating battles up front, but once again further proof that Sebastian and Lewis and really staking their claim to being undisputed number ones in their team. Valtteri did very well to bounce back from China and it will be interesting to see how he goes from here. We know he’s good at Russia, as he was good there with Williams before.

A couple of other mentions: Felipe Massa I thought had a very good race for Williams. Lance was unfortunate. I think Carlos [Sainz Jr] when he watches the replay will slightly regret that manoeuvre.

Hülkenberg had a tough race in terms of race pace, but ‘Checo’ Perez was another star for me. Unfortunately he had a tough qualifying because of the yellow flags, meaning he didn’t get to do his last lap and was knocked out in Q1, but he had such a good race. He did a very good job in the first two or three laps and then had good pace to go with it, to rack up good points. For me, he was probably the driver of the day. He did a really good job.

No question about it, though, the battle between Ferrari vs. Mercedes is going to keep going. 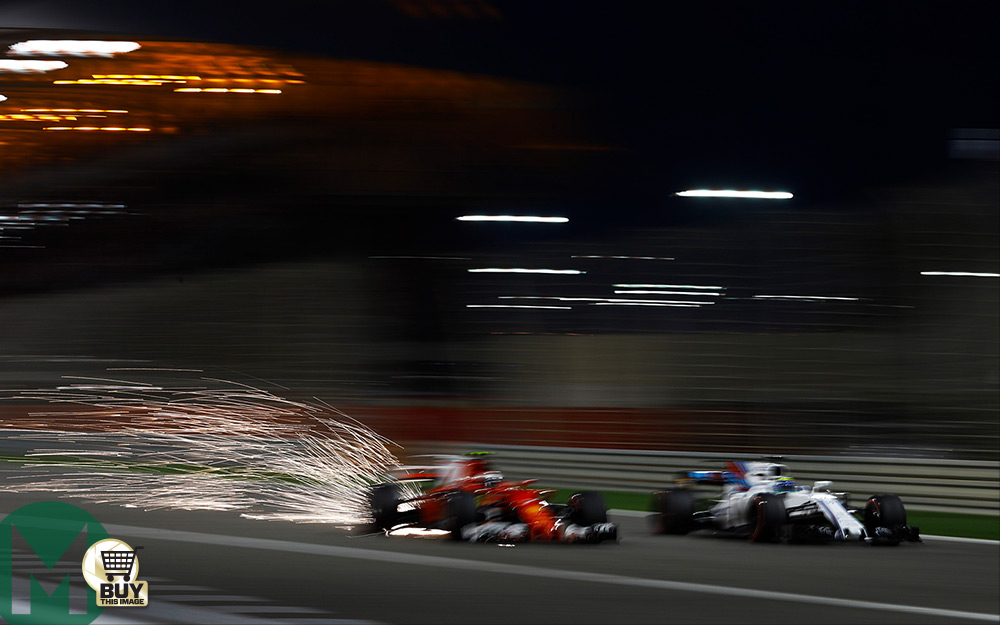