I’m currently sat in the Frankfurt airport lounge – it’s a glamorous world! – on my way back from the Chinese Grand Prix.

It was a heck of a race and I really enjoyed it because it was a real indication to us after Melbourne that it wasn’t a flash in the pan. This really is going to be a world championship that goes all the way down to the wire between Ferrari and Mercedes.

Let’s take a step back because it was all a bit disrupted over the weekend. We arrived at the circuit on Friday and it was very cloudy and overcast. We got hardly any running – we got 10-15 minutes in Free Practice 1 and then that was it for the rest of the day, FP2 was cancelled. As a driver that’s quite disruptive because you arrive with a plan of various things you are going to test, especially at this early stage of the season. You’ve done a race, you’ve got a load of ideas in terms of what you feel in the car, the set-up and what you want to evaluate with the engineers and you can’t test it. It really does throw a spanner in the works.

China is a totally different circuit layout – you have long radius corners where you are particularly loading the front-left tyre. It would have been really tough for the drivers. On the flip side it would have been the same for everybody. There’s no real advantage gained by anyone in those circumstances. The reason behind cancelling practice is a whole other subject and someone else will cover that. It really didn’t paint Formula 1 in a great light, though. We really should have a contingency in place. Obviously they had a plan in place for Sunday, but they should have those plans in place for the whole weekend.

There are people around the world who are hardcore fans who tune in to free practice. There were plenty of people that we met who had flown in from Australia, the UK, other parts of Europe and China to watch a three-day Grand Prix and it’s cost them a lot of money to come out and not see any cars. We should have had a plan. It looked a little ridiculous when the Porsche Supercup started 10 minutes after FP2. 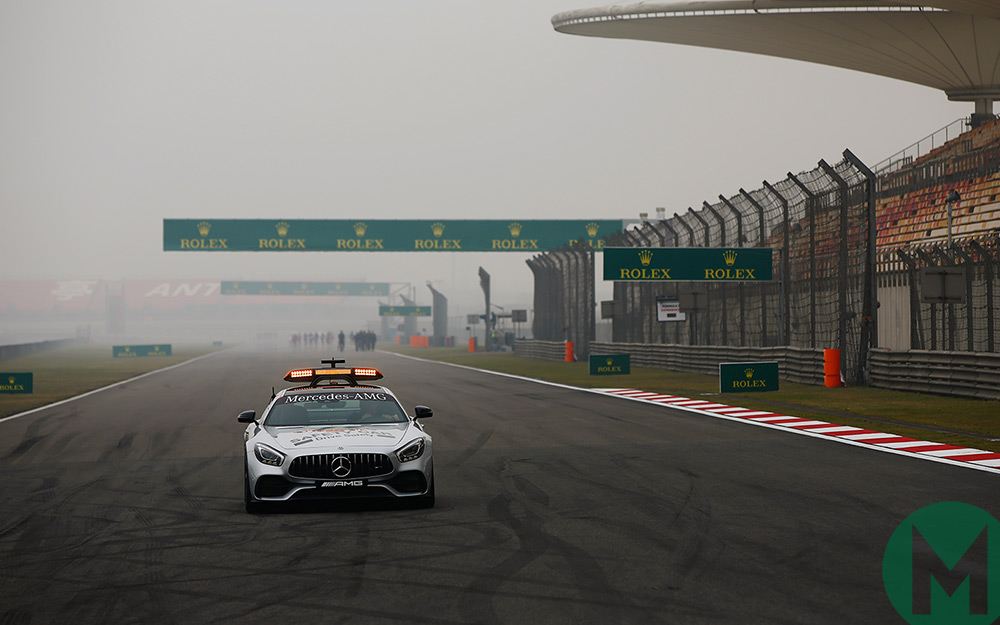 Lewis vs Sebastian in qualifying

On to Saturday and it was a really good qualifying session: FP3 was great and you had the prospect of Mercedes and Ferrari being very close, particularly Lewis against the two Ferraris, and it proved to be. That’s where a top-quality driver – like Lewis or Sebastian – earn their number-one status. They took a leap of faith, went out there and were ahead of their team-mates in qualifying.

The forecast was for rain all the way through and I went to the grid, standing at the front just before the national anthem and Carlos Sainz arrived. I know Carlos quite well and we started chatting. I said “you’re here early” and he replied, “yes, I want to go to slicks, I’ve made the decision, but no one else in my team wants to do it. They think I’m a bit mad!” He had basically legged it to get away from the discussions. It was a very brave move and it worked out well in the end. He started in 11th and got to seventh, but it was a very bold choice. He said to me “I know I will be last on lap one, but I think I will be in the top six by lap 10.” Sure enough he was in sixth by lap eight. It worked out. I do think he was a little lucky because of the safety car. If there wasn’t a safety car for Giovinazzi’s accident he wouldn’t have gained so much. He rolled the dice, it worked out for him and from then on I think he was one of the drivers of the day. A great performance and a fantastic result for him and Toro Rosso.

What can we say about him? He starts 16th and it was just incredible what he managed in the opening laps. The way he is able to find grip… He has got this incredible feel to find grip on parts of the circuit that other people aren’t seemingly able to exploit.

He has a huge amount of confidence – he’s young, fearless, whatever – but he’s not out of control. He’s very calculated with the moves that he makes and that opening phase of the Grand Prix was just incredible. He passed Daniel in a straight fight and Daniel is a top-notch racing driver. In this part of the Grand Prix Max was the man – he was quicker than anyone else. As the race went on Daniel came back at him so if you look at it over a Grand Prix distance from, say, lap seven, there wasn’t too much to choose between the two Red Bull drivers. However, to go from 16th to fourth in those first half a dozen laps was just amazing stuff. Absolutely the driver of the day in my books. 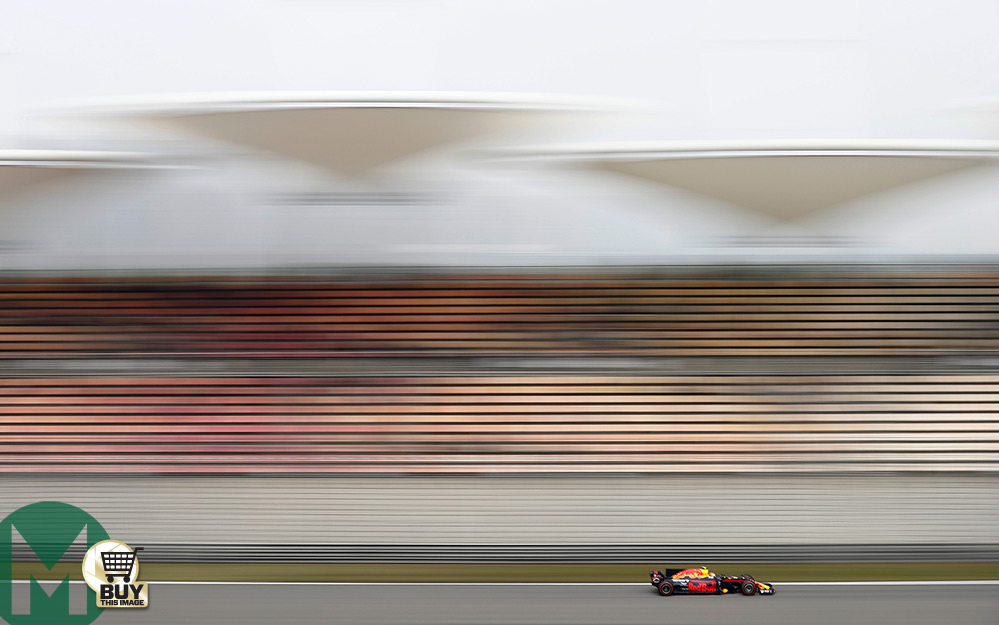 Vettel’s race for me was a story of what could have been. When he pitted under the virtual safety car it looked like the right decision: I was in the pitlane and I thought ‘this is going to work out for him’.

Ironically the third driver from Ferrari, Antonio Giovinazzi, caused the proper safety car which allowed the Red Bulls, Kimi and Bottas to get ahead – although Bottas did then spin under the safety car. That really compromised his race. If you contrast Seb with Kimi he was in a situation where he thought ‘I am going to get on with this, I am not going to sit back’.

He came up behind Kimi and Daniel and while Kimi had a couple of looks at getting past Daniel, he never looked like he was doing anything innovative to get past. Seb was really thinking ahead in the cockpit and if you looked at the way he set up the moves he would go much wider through turns one and two to generate the downforce – you want the air flowing cleanly over your car – and he would use unconventional lines on first Kimi and then Daniel for a move at Turn Six. That move he did at Turn Six was a result of everything he did at turns one and two.

Kimi was behind Daniel for a long time – Seb got past Kimi and within two laps he was past Daniel as well. If you look at the gap at that point he was 13 seconds behind Lewis and then only six seconds at the end. OK, they’re all doing tyre saving and engine mode saving in different places, but if you look at the fastest laps in the Grand Prix Seb and Lewis were clearly the A-listers, establishing themselves as championships favourites. They did a 35.3 and a 35.4 as their fastest laps. Valtteri was half a second down, Kimi was half a second down and the Red Bulls were further back still.

These two guys laid down a marker this weekend – this championship is going to be between them unless Valtteri and Kimi can really get it together. It’s in their hands – they have the tools there. I will be interested to see how much they can raise their game. Will we start to see team orders come into play in the second half of the season? It’s great for F1 to have two teams fighting it out.

The best of the rest 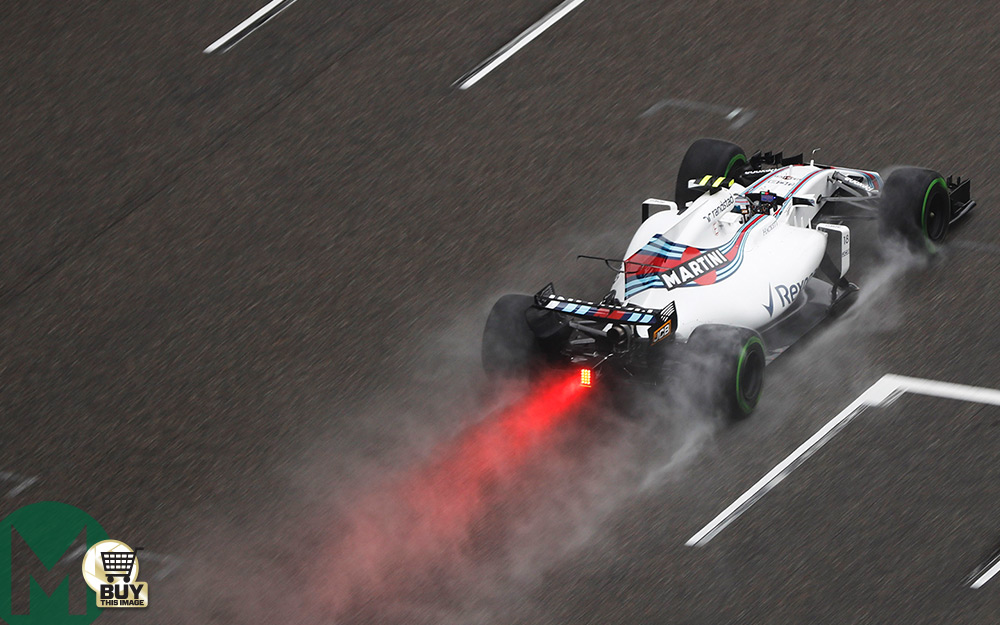 A tough test of character

The driver who had the toughest time was Giovinazzi because he was on such a high after Melbourne. He had two big accidents in China which caused a lot of damage. It would have completely deflated his confidence and now if they get Wehrlein back in the car for Bahrain, Giovinazzi is going to have weeks, maybe months, of his last Formula 1 memories being twice in the barriers. That is going to be tough for him psychologically.

Only three days off and then everyone reconvenes in Bahrain. It should be a cracking weekend because it is the first normal circuit. Australia is a street circuit and China is a bit unconventional with these long tightening corners which we don’t have anywhere else in the world, apart from Paul Ricard which we are going to next year. Bahrain to me is the first true test of where everyone is at. Track temperature will be higher – it was freezing in China, I think it was 10 degrees – and the weather yesterday in Bahrain was 40 degrees. It will be really interesting to see where everyone is.