Karun Chandhok reports after a tense Grand Prix at Spa, where Ferrari limited its losses and the Force India drivers continued their feud 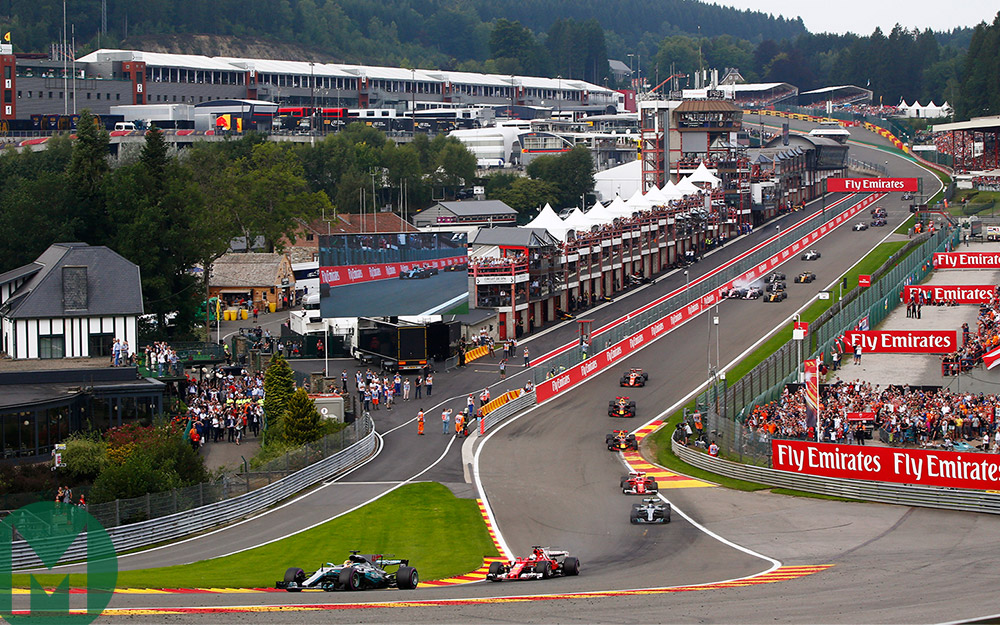 It was a really tense contest between Mercedes and Ferrari at Spa and I think it ended up a lot closer than a lot of people expected, including me. This really should have been a Lewis Hamilton/Mercedes slam-dunk, but actually Ferrari seemed to be in much better form than anybody really expected. All of a sudden, especially when we got to Q3, it became quite apparent that it was game on.

It’s interesting, because I think on the Fridays they’re all playing games now in terms of showing their hand, particularly Mercedes, Ferrari and Red Bull. Therefore, as the season goes on with different engine cycles and things like that, we’re not seeing the peak performances until FP3. This weekend when we got to Q2 in qualifying, we saw Mercedes turn the wick up and they gained around 5kph. I think that’s just sheer power. The wind didn’t really change direction and I don’t think they changed a huge amount of downforce, so it shows yet again that the Mercedes extra horsepower makes a big difference.

That really came into play when it comes to the Grand Prix. When you look at the opportunities that Seb had at the end of the Kemmel Straight, on the two chances that he had a great slipstream and a great tow, he ran out of electrical juice and power before he could make a move. It was the superior horsepower of the Merc that kept Lewis in front just enough as they went up the straight between Eau Rouge and Les Combes.

Lewis had an absolutely stellar weekend, faultless all through it. In qualifying the lap he delivered was absolutely brilliant, I don’t think there was anything left on the table. He did a solid job all through free practice. For whatever reason Valtteri looked really off-colour and didn’t look like he was anywhere close to where he needed to be to challenge Lewis.

Come the start of the Grand Prix, Lewis just had more grunt than Sebastian off the line and to the top of Les Combes, but the key moment for me was on the safety car restart when they went through Eau Rouge. First I think Mercedes did a very good job of making sure that the drivers had enough ERS at the end of the Kemmel Straight in case they needed to defend.

Lewis was able to go to a higher power mode, so at the point that Seb had a bit of a de-rate, Lewis could keep going. But still, he was on the soft tyre whereas Seb was on the ultra-soft and that’s a two-step difference. Therefore the tyre warm-up was not as good as on Seb’s car, but when he got to the Kemmel Straight you could see he picked one line and stuck to it down the middle of the road, whilst Seb was sort of going left and right. Lewis judged that braking to perfection and that to me has been one of Lewis’s biggest strengths throughout his career.

There are very few people throughout the history of F1 that have been better on the brakes than Lewis Hamilton and I think we got such a good illustration of it on Sunday when he picked his braking point. He got the car stopped and, psychologically, that’s hard to do when you’ve got a guy on potentially better tyres right behind you. He picked that point and stuck to it, got to the apex and then he was away.

I think that was a classic Lewis Hamilton defence and it’s in those moments where championships are won. You compare that to someone like Bottas who got mugged on the restart by both Daniel [Ricciardo] and Kimi [Räikkönen], suddenly you realise why Seb and Lewis are the A-listers, the number ones in the team and the two guys at the top of the world championship.

Seb dug it out in qualifying and got lucky because Kimi gave him a slipstream, but he didn’t look as comfortable as Kimi through free practice. When he got to Q2 and Q3 it started to come to him, while Kimi seemed to have lots of vibration issues with his tyres. He just didn’t seem as happy, but Seb seemed behind all through until they got to that final round of Q3 where Kimi gave him that slipstream back to the line and that gave him that front row spot.

In the race Seb did what Seb does. He’s got tremendous ability to hammer out those times, lap after lap after lap. He kept the pressure on Lewis, waited for a mistake that never came. Equally, he never made a mistake either. They just sat together all through the Grand Prix and, as I said, I think there was maybe the one opportunity after the restart. The combination of the Mercedes power modes and Lewis’s braking kept him in front, but a strong weekend from Seb. I think he should be happy to come away from Spa losing only seven points rather than 10 and I think for Mercedes it was opportunity lost for not getting Valtteri in between Lewis and Seb. That was quite a key point for the championship.

For Kimi it was a strange race because he got the penalty for double-waved yellows. It’s such a hard one. As a driver you see double-waved yellows and you know you need to back out of it, but in fairness to him they were on the straight, completely away from the racing line and he got caught out just because he did a personal best sector. It was quite harsh on him, but rules are rules. Otherwise I think he had a good car in the race and he definitely would have ended up ahead of Daniel.

Heartbreak for Verstappen and his 80,000 Dutch fans

It was a real, utter shame for Max, because there were 80,000, screaming Dutch fans in the grandstand. It was absolutely nuts. I don’t know how, but after 16 years of going to Spa I still managed to get lost. I was driving on Thursday with Lee McKenzie and arriving in the paddock, we ended up in the Dutch campsite somewhere out near Les Combes.

It was absolutely insane. I’ve never seen so much craziness in one campsite in my life. Maybe that’s because I don’t camp enough, but that’s besides the point. It was nuts and for them to see their main man drop out after eight laps, especially when you saw how it panned out and Daniel got a podium, it was really unfortunate for him. Max was ahead of Daniel all through the weekend.

Fernando Alonso: it was his usual theatrics of ranting down the radio, his ‘don’t speak to me’ and all sorts. You can understand his frustration, but with every week that goes along, you start to realise that his options are closing. Sebastian re-signing with Ferrari for three years was obviously the big news over the weekend in the driver market, so the options are starting to close up for Fernando.

It’s getting to be a situation where if he’s going to stay in F1, he’s going to stay at McLaren. I really hope Honda get it sorted on the engine because it’s not good for him and it’s not good for Vandoorne either, who’s driving really well. We saw they did a great job of using the slipstream to get him up there and Fernando got up to seventh on lap one with a brilliant start. Then on, it just fell apart.

Jolyon Palmer looked very good all through free practice, ahead of Nico Hülkenberg, and then the gearbox went pop in Q3. He was ahead of Nico in qualifying at various stages and he was on for probably his best qualifying of the year and Nico showed that Renault is genuinely now the fourth best team. 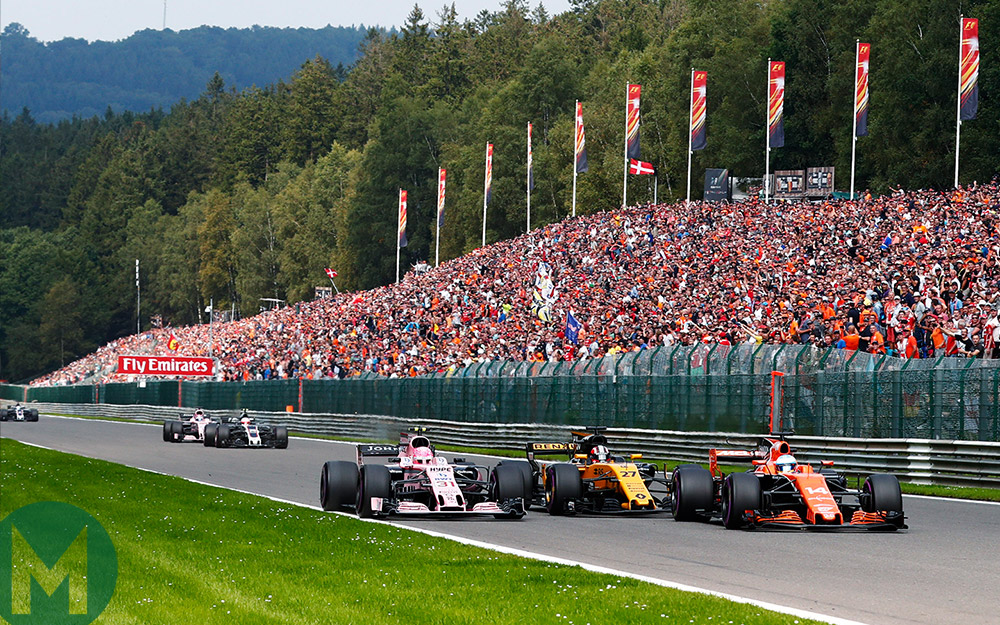 Finally, I think we’ve got to talk about the Force Indias, because clearly the gloves are off as they have been since Baku. With the first incident on lap one when they hit each other – it’s always tricky on lap one when you’ve got cars all over – and personally as much as Checo is a good friend of mine I do think he could have given his team-mate a bit more room on that second instance.

When you’re crowding someone up against the wall, I know what it’s like. The natural line is for you to come across from La Source towards the wall, you see the wall coming and you think the gap is closing so he’s going to lift. When you’re driving for a team and you’re in a situation where you respect your team-mate, you would give him not a massive amount of room but enough for him to at least come safely out and then you sort it out at Les Combes at the top of the hill.

After that there were the comments coming from both drivers. First there was Esteban, who was coming out with all sorts of comments about Checo wanted to kill him and Checo’s not a bad guy. He wouldn’t want to kill him, but it all imploded and anyway, we’ll see how that pans out when we get to Monza.

Only a few days until the next race, and Monza should be an out-and-out Mercedes race. Bottas has got to get his stuff together; he’s got to get between Seb and Lewis to help Lewis in the championship. I think Spa was a weekend that showed Valtteri is heading to the territory of being a number two.